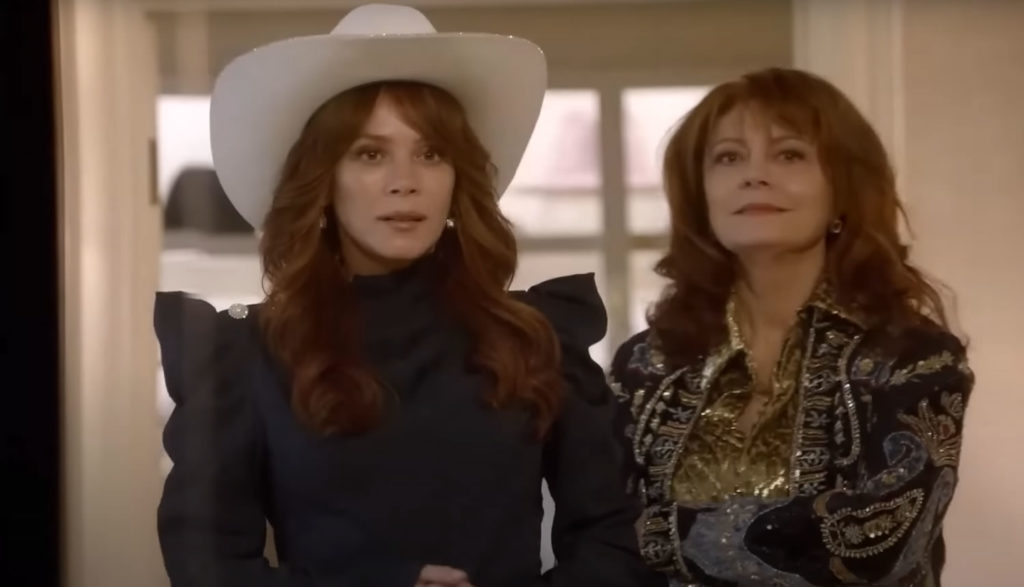 The Romans are the “First Family” of country music.

Dottie Roman, the family matriarch, has been pumping out hits for 40 years. But now that she has cancer, she’s finally ready to pass the torch to the next generation

Albie Roman, the family patriarch, hasn’t had a hit of his own in a few years. But his fans still consider him to be the “King” because of his devotion to Dottie.

Carrying on their legacy are children Luke, Gigi and Nicky—although perhaps not in the ways you would think.

Though talented, Luke decided to pursue the business side of making music. Now, he’s the CEO of Monarch, the Roman family’s country music label.

Gigi is bursting with talent. But after years of hearing her mother say she wasn’t good enough (Dottie didn’t believe Gigi had the right image to carry on the family legacy due to Gigi’s heavier build and sexual preferences), Gigi gave up a life on the stage and decided to open a country-themed bar instead.

And Nicky, though not quite as talented as her sister, is her mother’s pride and joy. Dottie has groomed her as the family’s chart-topping heir apparent.

But before Nicky takes on the crown and scepter, Dottie has one last big favor to ask of the girl.

She wants Nicky to help her commit suicide.

As I already mentioned, Dottie has cancer. And rather than spend her last months in hospice care, pumping her body full of drugs that may or may not save her in the end, she’s decided to go out on her own terms: with a smile on her face and flawless hair.

But if there wasn’t enough pressure to live up to her mother’s name, now Nicky must hide the truth of how Dottie died from her entire family.

To make matters even worse, the label doesn’t believe Nicky has what it takes to headline her mother’s tribute world tour. They do, however, believe Gigi does. And without Dottie there to beat her down, Gigi just might push her sister out of the spotlight.

But talent isn’t the only thing that runs in the family. Infidelity does as well.

Nicky has just discovered that her husband is cheating on her … again. And Gigi doesn’t know it yet, but her wife cheated on her too—with Luke.

Albie and Dottie’s “perfect” marriage is a bit of farce, as well.

Turns out Albie had an affair nearly 40 years ago, in the first years of his and Dottie’s marriage. He ended it after their family barn burned down under suspicious circumstances and hasn’t strayed since. But he’s only just now confessed, not wanting his wife to pass away with a lie on his conscience.

Dottie already knew. And she forgave him. But maybe that’s because she’s the one who burned down the barn. And maybe, just maybe, there was someone inside that barn. And again, just maybe she paid someone off to keep the truth from getting out.

It’s hard to say for sure, but Dottie clearly hadn’t burned all her skeletons. And it may just fall to her family to bury the past.

It’s unsurprising that Monarch is about a family’s country music empire. The plot of the story itself reads a bit like the lyrics of a country song.

There’s plenty of content here to sift through, but for the most part, it’s not graphic.

Yes, there’s some language, but it’s minimal. (And since it’s on network television, you won’t hear anything bad enough to get bleeped out.)

Yes, there’s some violence, but it’s not gory.

And yes, there’s some sexual content, too. Gigi is gay and kisses her wife. Other couples kiss as well, and we hear about multiple extramarital affairs.

So is Monarch something you’re going to want to queue up each week to watch with the whole fam? Probably not. After all, just because it’s about family doesn’t mean it’s for family.

Dottie says her final goodbyes as she prepares to die by suicide instead of succumbing to cancer.

Nicky helps Dottie take a bottle of pills, and Dottie passes away shortly after. (Before the event takes place, Nicky is torn, telling her mother that suicide is a sin. But Dottie tells Nicky she “booked [her] ticket to hell” years ago.)

A man fires a gun at someone offscreen. Later, he buries a body wrapped in a canvas sack. A woman lights a barn on fire (and we hear screaming in the background). A man punches a reporter for asking prying questions (the attacker later apologizes for his behavior, but not to the person he hit). A woman burns her husband with a curling iron.

We see a man from the waist up in a bathtub. A few couples kiss (including same-sex couples). Some women wear revealing outfits. Nicky learns her husband has had another affair and wonders if the woman was of legal age. Albie confesses he also had an affair, but Dottie forgives him since she already knew and put it behind her. We learn that Gigi’s wife had an affair with Luke.

People smoke and drink. There are references to smoking marijuana.

People lie. We hear negative comments on the appearance of a larger woman (and it’s hinted she received this same feedback from her mother when she was a kid). We also hear some ageist remarks. Someone is being blackmailed. Adult children vie for their parents’ affection and approval. We hear Nicky’s husband isn’t a good father to their children.

There is a reference to Mother Theresa. Several country songs reference God and the devil. A few people offer genuine thanks to God.