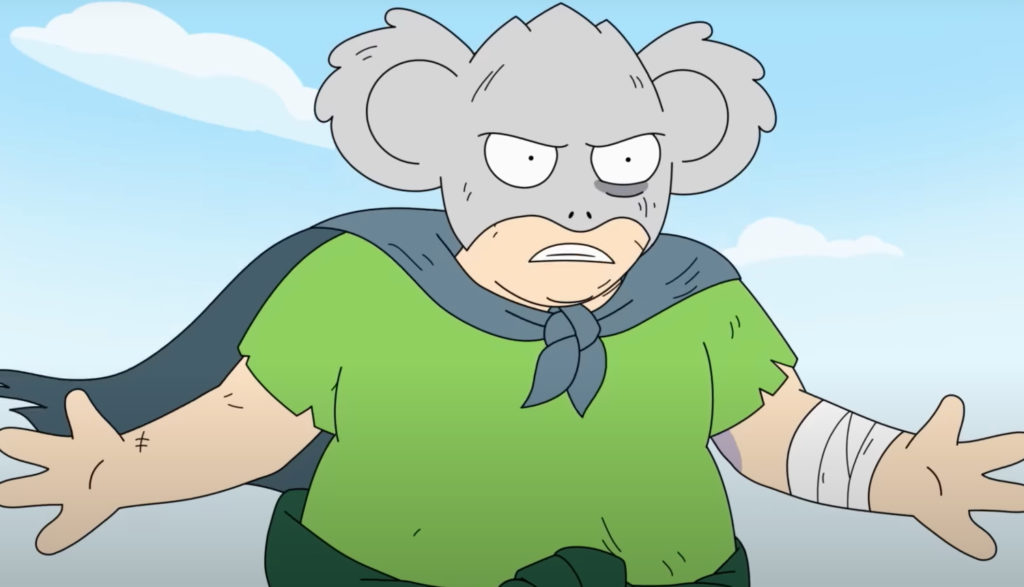 Ah, Dapto, Australia. It’s a suburb that one animated explorer describes as the “most boring, backwards…place in the entire world.” We’ve never been to Australia, and there’s certainly some place that has to hold that title, so we’ll take him at his word. (If you’re a reader from the actual Dapto, our apologies.)

But even such a boring place has crime that needs to be thwarted—like grass that’s been allowed to grow a centimeter too high, or people who loiter. But such workers of iniquity won’t get away with their heinous crimes—because Koala Man is on the case.

Under the mask, Koala Man is Kevin, your mild-mannered husband of one Vicki and father of two, Alison and Liam. No one asked him to take on the role of town defender. No, seriously, no one asked. The town isn’t exactly the biggest fan of Koala Man.

And, no, Koala Man doesn’t have any superpowers. But what he does have is a wicked cool mask and full knowledge of every town rule and ordinance in the book. And he’s here to stop whatever crime he can find—even when those petty crimes start becoming world-threatening.

It seems that in order to be a successful adult cartoon, creators start by thinking of enough crude sexual or violent jokes to fill roughly six-to-10 episodes. After that, they might consider making a plot to stitch it all together. I’m not saying that all adult cartoons are the same, I’m just saying that they seem to pull all their content from the same middle school locker room and put it into different settings.

The difference with Koala Man? The jokes are pulled from an Australian secondary school locker room.

Michael Cusack’s show features many sexual references, including an episode centered around an eldritch-like beast nearly destroying the world by, ahem, pleasuring itself with the planet. How is the day saved in another instance? Ah, well, a man expels gallons of urine to quench a raging fire. Animated nudity and wildly suggestive outfits are present, too. Foul language is pervasive.

We’ll also deal with a lot of blood and violence as people are torn limb from limb in various deadly scenarios—and children aren’t safe, either. A group of minor gods help Dapto to win a soccer game. Drug use occurs too, including a pair of regularly featured men who are addicted to meth.

All of the content is really a shame, because the show’s subplot regarding how Koala Man’s crime fighting has caused him to forsake being a good husband and father may have made for a promising story. But in the age of adult animation where sex and death equals humor, apparently—at least in the creators’ eyes—Koala Man joins a plethora of shows that would just as likely kill off the family for laughs as it would try for an emotional plotline.

Koala Man forgets to put out his garbage bins, leading to the entire town forgetting to put out their bins, too. Vicki, unable to fix her marriage, resorts to fixing things around the house. Alison starts her quest to become popular.

A boy spraypaints male genitals on a sign. A woman is seen in a bikini. A man kisses a crocodile. We hear a reference to a man pulling a fish out of another man’s urethra—and he still has the animal in a jar. A woman mentions ejaculation and a sex toy. Two women discuss being intimate with their husbands. Menopause is also mentioned. Kevin and Vicki kiss.

Koala Man throws eucalyptus oil in a man’s eyes. Koala Man is covered in blood after rescuing a cat. People are eaten by a giant sentient poppy. Others are seen with their limbs and heads torn off and their organs exposed. One man, torn in half, speaks to Koala Man before passing. Koala Man’s friend shoots the dead body in the head, unsure of if the man would come back as a zombie. Alison says that she’d “genuinely kill herself” if anyone from school discovered that her dad is Koala Man. Someone drinks a beer.