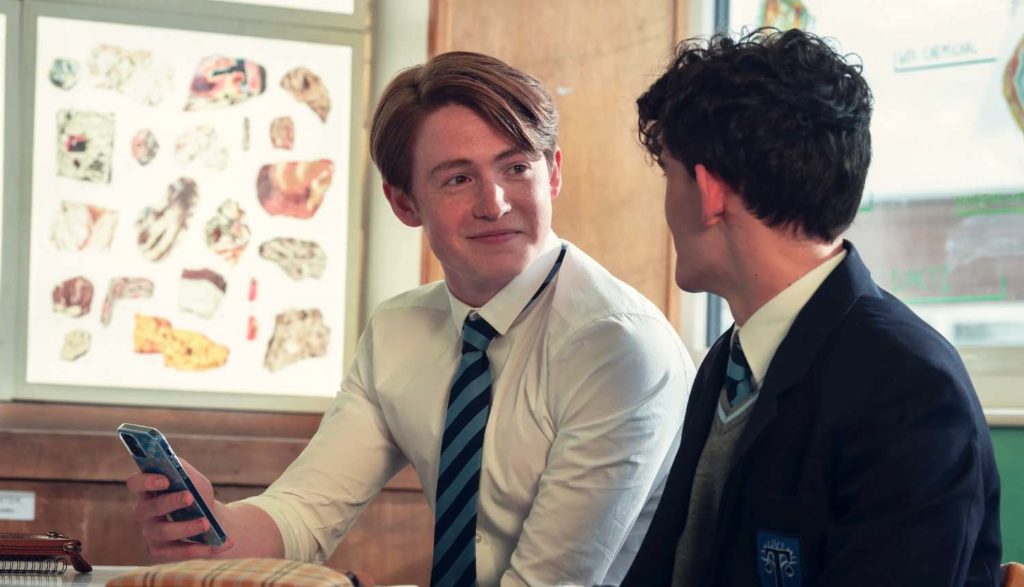 I’ve often heard people theorize that going to an all-boys school or all-girls school is better because there’s less drama. Kids can really focus on their studies because they aren’t so worried about who likes who. And the uniforms make everyone equal.

But let’s be honest, when hormones are involved, all bets are off. Which means Truham Boys School and Higgs Girls School are in for a world of drama.

Charlie, the only openly gay student at either school, likes Ben. But it doesn’t seem that Ben likes Charlie all that much (which is confusing since Ben keeps kissing Charlie). Then Charlie starts liking Nick, but Nick isn’t sure how he feels because even though he enjoys kissing Charlie, he also kissed Tara once and enjoyed that too.

However, Tara didn’t enjoy it and now she’s dating Darcy. They become friends with Charlie’s friend Elle when Elle transfers from Truham to Higgs. Elle likes Tao, another member of Charlie’s friend group who maybe, sorta likes Elle back. But Tao is worried that Nick is going to hurt Charlie since he found out that Nick sorta maybe likes Imogen?

Add in school bullies who sling around homophobic slurs and teachers woefully ignorant of the abuse going on around them, and it’s a wonder anyone can focus on their education at all.

Netflix’s Heartstopper has been compared to HBO’s Euphoria. But they’re in two totally different leagues.

Where Euphoria exploits graphic sex scenes and literal heart-stopping drug abuse to tell the stories of deeply troubled LGBT youths, Heartstopper approaches the subject from a lighter, more hopeful point of view. Which means the content feels much lighter as well—at least in the sense of explicit gratuitousness.

Nobody removes their clothes (although we do see a few shirtless lads changing into their uniforms in the locker room). But we do see a few same-sex couples make out, and we have teens representing every letter of LGBT.

We don’t witness drug use or suicide attempts, unlike Euphoria, but Charlie wonders if it would be better if he “disappeared.” This grim suggestion immediately gets shut down by his sister, who says her life would not be better if he didn’t exist. And later, his friends and boyfriend say the same, emphasizing that their lives are better because he exists.

However, the reason Charlie goes down that sad path is because of the bullying he faces at school. We learn Charlie was accidentally outed the previous year and spent most of his lunch breaks hiding away in the art teacher’s classroom (a safe space, the show suggests, since the art teacher went through similar bullying when he came out in high school). Charlie’s used to the abuse now, but his friends aren’t. They still want to protect Charlie (as does the adolescent’s family). But none of that protects him from several fistfights with his tormentors.

Sadly, Charlie isn’t the only one enduring terrible torments at the hands of bullies in this story. We learn that Elle transferred schools to escape the brutality of the Truham boys. When Tara comes out at Higgs, she has a meltdown from the cruelty she faces. The boys Charlie likes hesitate to admit their feelings because they fear being mistreated like him. And while we may not agree with their lifestyle choices, nobody, especially a child, deserves to suffer the abuse that these LGBT characters are forced to endure.

So where does that land viewers considering the show at home? Well, as I said, it’s a lot lighter content-wise than similar teen dramas. And we do glimpse some positive messages about friendship and healthy relationships.

But the central focus on LGBT stories is inescapable here. And the narrative clearly invites us to make the leap from sympathizing with these characters’ harsh and unjust treatment to affirming the sexual identities that set them apart—a leap that will likely be too big a gap for many, if not most, Christian families.

When Charlie meets Nick on the first day of term, he immediately develops a crush on the older boy.

Ben and Charlie kiss several times, and Ben instructs Charlie not to tell anyone. Later in the halls, Ben embarrasses Charlie by pretending not to know him when Charlie says “hello.” (Later on, we see Ben kiss a girl.) Ben then tries to force himself on Charlie, and Nick saves Charlie.

We hear about a “transphobe” teacher who refused to call a trans student by a new name. Bullies used to throw sandwiches at the same student, who finally transferred to an all-girls school. We see some shirtless teen boys changing clothes.

A teacher makes it clear he doesn’t care what his students do so long as they are quiet about it. Charlie offers to help Nick cheat on his homework (which Nick declines). People lie. Charlie has difficulty being honest because he fears he’s an inconvenience to others.

We hear misuses of Christ’s and God’s names, as well as “p-ss.” Someone texts “ffs,” which is an acronym involving the f-word.

Two boys make out and kiss several times. One sits on the other’s lap for a picture. A female same-sex couple kisses. A straight male boy and transgender girl hold hands and nearly kiss. A boy reads a book entitled “Gender Explorers.” A boy tells his mom he is bisexual.

A student wonders if he is ruining the lives of everyone he cares about since two of his friends got into fistfights defending him (and we see the resulting black eye on one). A trans girl fears reentering the boys’ school for the first time since transferring to the girls’ school.

A teacher encourages a student to talk to his friends about his problems instead of isolating himself. Soon after, the boy makes amends with his friends, apologizing for not appreciating them. He also stands up for himself (verbally) against one bully.