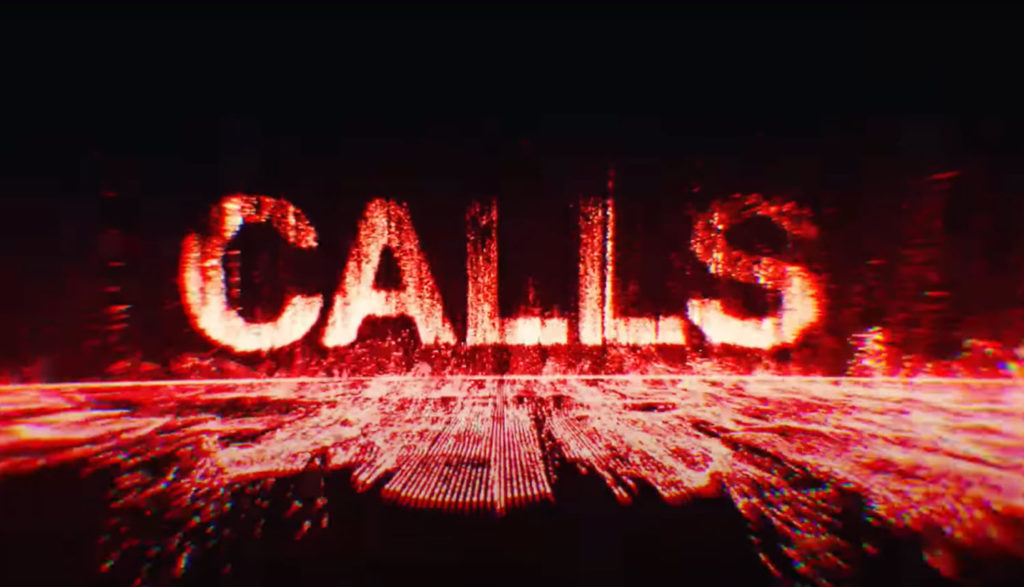 We fear most what we can’t see.

That’s why we turn on the lights when we’re all alone in a strange house, or why we look out the window when we hear a strange noise outside. To see something is to know that something a little better—to strip away some of its mystery and uncertainty. What we see might be as innocuous as a cat or as terrifying as Godzilla. But hey, at least we know what we’re dealing with.

But what if we can’t see it? What if we’ll never see it?

Welcome to Calls—a show you can “watch” with your head under the covers.

Things That Go Bump in the Dark

Not that you’ll ever see them, of course. The only elements on screen are a few flowing graphic elements (think of a 1990s screen saver, if your memory goes back that far) and subtitles, so we can read what is being said. Essentially, the “viewer” simply eavesdrops on a series of apparently unconnected events that may lead to a worldwide something—one still played out only through audio.

It’s a bit like the best old-time radio mysteries that, for all of their age, still carry some notoriety even today. The first half of Orson Welles’ famous War of the Worlds radio drama, for instance, played out in a series of breathless news reports. Sorry, Wrong Number featured a bed-ridden invalid who (due to a glitch in the phone) overhears two killers talking about a murder they’re about to commit. And then he makes increasingly terrified calls to the police. Both shows used the ear, not the eye, to communicate their terrors. And while they were very different stories—War’s scope was worldwide, while Wrong Number took place in just a tiny bedroom—both used clever gimmicks to bring you closer to the action. Neither felt scripted. They made listeners feel more closely, and terrifyingly, bound to the story.

And like those two radio dramas, Calls offers a voyeuristic vibe. We listen in on some very, very private phone conversations—a man struggling to break up with his girlfriend, a husband who just learned his wife was pregnant—that slowly unfold into something very, very different. It’s a bit like The Twilight Zone, but for the ear. Oh, and with more content problems, too.

A Sound for Sore Ears

You’d think that Calls’ very conceit would eliminate plenty of content concerns. And indeed, some are mitigated. We don’t see anything, so nudity is out of the question. Blood doesn’t spatter across the screen. Alcohol and drugs stay safely out of sight.

But, of course, your imagination can conjure up many of these elements more effectively than any cinematographer, so we’re hardly out of the woods here. We might not see blood, but the terrors that lurk out in these darkened streets are conscientiously described by our unseen callers. And sometimes, what those monsters do to the callers is communicated, too.

And then, of course, we have the language concerns. The f-word and s-word are both used with some regularity, interspersed with other profanities. Calls is creative, immersive and—most importantly for a show like this—scary. But while it does sidestep some issues, it amplifies others. And those latter parts make this an easy call for us to make.

Mark talks with his wife, Rose, by phone as he drives from Phoenix to Tucson after the two fight. Furious that Rose is pregnant, Mark said he was going to stay at his friend Andy’s house for a couple of days to figure out what to do. But as he talks with Rose, then his Mother, then Andy, it seems as though the short drive is taking much longer than it should.

The show contains some messages about the importance of fatherhood, and how powerful a connection between father and son can be. But Mark, who believes he was abandoned by his own father, says he can’t be a dad himself. He mentions to Andy the possibility of abortion. We learn that Mark’s mother lied to him about some salient facts in his own father’s life. We hear about how someone remarried.

Mark punched the garage door before leaving, and his bleeding hand becomes an occasional topic of conversation. Someone references a mutual friend who was on drugs. Mark’s told about a funeral, a divorce and a remarriage. Mark and someone on the other line talk about getting a beer sometime.

The f-word is used about 14 times, and the s-word about half that many. We also hear “a–” and several misuses of God’s name (two of which are in conjunction with the word “d–n”. Jesus’ name is abused once.

Tim and Sara talk across the country, she in New York, he in Los Angeles. Tim’s just about to tell Sara that they should really call it quits—that he has another girlfriend in L.A.—when Sara spies someone lurking around her house. And it’s about then that things go really, really wrong. (Spoilers ensue.)

Tim’s new girlfriend calls Tim and tells him that she’ll slip into bed with him tonight: Subsequent conversations make it clear that Tim thought she did just that, and that he even “made love” to her, when she was nowhere near. “I’m looking at her naked back,” he says in horror of the bed-dwelling doppelganger. Tim and Sara recount their first date, when they made out on a ping-pong table. Romantic revelations are made.

In New York, Sara’s attacked, and the paramedic on scene says that she’s “in very bad shape,” later saying it looks like she’d been attacked by a wild animal. (He tells someone over the phone that she’s “pretty mangled” and has lost too much blood to live. Someone says that someone else’s skin appears to have “melted off.”

A 911 operator asks Tim if he’s taken “any drugs, alcohol or medication.” An earthquake apparently strikes both New York and L.A. People are drawn up into the sky in a scene that feels a bit like the Rapture is often described. Tim, still on the phone, asks Sara, “Do you see this?” Then, the screen changes from dark to light, the font from light to dark when Sara answers, “I do.”

We hear the f-word about five times and the s-word another four. God’s name is misused at least 17 times, and Jesus’ name is abused once.