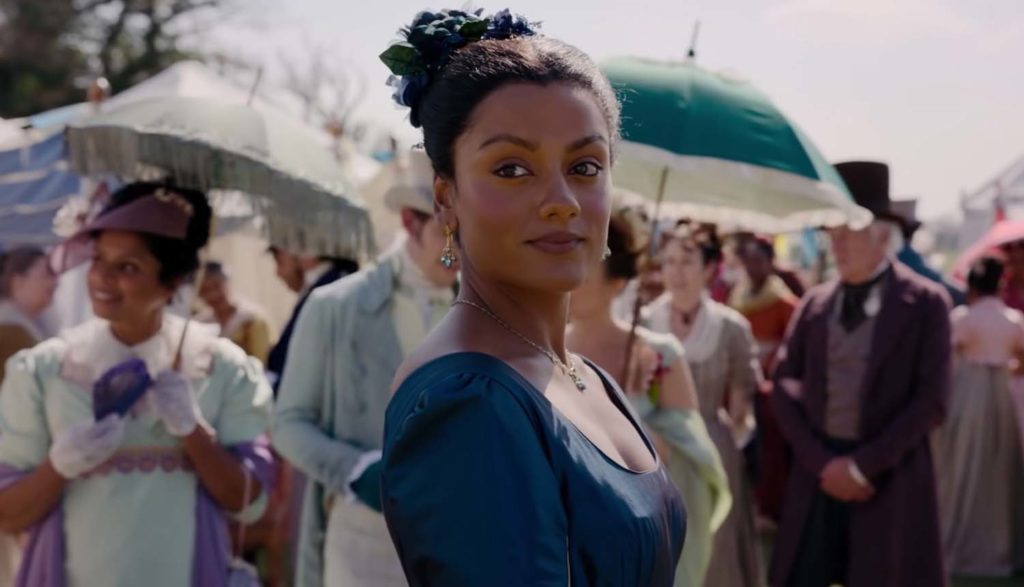 In Regency England, each summer marked the beginning of the “social season”—a time when every young marriage-minded person would attend balls and parties, hoping to make an advantageous match.

For the ladies of the court, this means squeezing into corsets the size of “an orange and a half.” For the gentlemen, it means competing against dozens of other suitors for the affections of a desired maiden.

But for everyone, finding the right spouse means securing a financial future, raising your family’s social standing (because if you marry above your station, your parents and siblings will, naturally, be exposed to people of higher ranks as well), or, if you marry poorly, drowning your family in scandal or financial ruin for generations to come.

“Consider the household of the Baron Featherington,” we’re told. (Or rather, the late Baron Featherington.) His three young daughters all  “came out” together last season (though his youngest, Penelope, would have been perfectly happy to sit out the season and immerse herself in books).

However, hopes of marriage were nearly dashed for the sisters when it came out that their cousin, Marina Thompson, was pregnant out of wedlock. Then their father died suddenly, revealing that he had squandered the family funds and left his girls without dowries. But hopefully his successor, the new Lord Featherington (their cousin) will set matters straight in time for middle sister Philipa to wed her betrothed (much to eldest sister Prudence’s chagrin).

Then there’s the household of the dowager Viscountess Bridgerton, “noted for its bounty of perfectly handsome sons and perfectly beautiful daughters,” we’re told. Eldest daughter, Daphne, managed to secure the much-sought-after Lord Hastings (a duke who had been determined to never marry or sire an heir before he met Miss Bridgerton) last season after Queen Charlotte herself declared the young woman “flawless.” But now, it’s Eloise’s turn to fill her dance card (with fake names since she’s about as determined as her new brother-in-law was to never wed).

Eldest son Anthony also hopes to find a bride this season, searching for a woman who is “tolerable” and “dutiful,” possessing “suitable enough hips for childbearing and at least half a brain.” Though he states that last part is more of a preference than a requirement.

And last, but certainly not least, is the house of Lady Danbury. She coerced what was possibly the most successful marriage last season when she convinced her nephew, the Duke of Hastings (Daphne’s now-husband) to give the season’s “diamond” a chance. And having no more children (or siblings’ children) of her own to marry off, she’s now setting her schemes in motion for the Sharma sisters.

Recently returned from Bombay, the sisters are already swimming in scandal. Their mother was the Queen’s “incomparable” herself back in the day but shocked all when she chose to marry a penniless (and title-less) clerk who already had a child. Younger sister Edwina has the Queen’s favor this season, but eligible bachelors may find her hand difficult to attain since elder sister Kate is incredibly protective of her sister (and selective of the men who chose to pursue her).

With so many moving pieces, one can hardly be expected to keep up with who is engaged to whom and whose prospects have sunk while others’ have risen. Luckily for the residents of Grosvenor Square, they’re all being reported by the Lady Whistledown in a widely distributed society paper.

Nobody knows for certain who Lady Whistledown is (except for viewers, of course), but they are certain her information is correct. Which prompts nearly every family to keep their private scandals (such as an unmarried woman’s pregnancy and subsequent attempt at abortion, a baron’s secret mistress, gambling debts and more) private.

Alas, the same cannot be said of the show.

If you took Gossip Girl, combined it with Fifty Shades of Grey, and set it in 1813 England, you’d get Bridgerton. The time period, costumes and emphasis on marriage might be reminiscent of a Jane Austen novel, but the foul language and gratuitous sex scenes (not to mention the scandals taking place) would likely cause even Mr. Darcy’s jaw to drop.

As the social season comes to a close, the Sharmas worry whether Kate will recover from her riding accident, the Bridgertons recover from several scandals, the Featheringtons face financial ruin once again and Eloise finally discovers the identity of Lady Whistledown.

A woman nearly dies after being thrown from her horse. (She hits her head on a rock, requiring stitches and several days of bed rest.)

A couple makes out several times and has sex. (We see everything but their genitals.) A woman poses naked, her privates covered by a blanket, for an artist. We see several other nude paintings in the artist’s studio. We hear that a man was alone in a closet with a young woman and later see the woman adjusting her bosom. Another man proposes to a woman he had sex with in a previous episode. A man kisses the mother of his betrothed in an attempt to seduce her into betraying her daughters to poverty. Many gowns reveal cleavage.

God’s name is misused a few times. Characters lie and scheme (sometimes in misguided attempts to help others but more often for their own devious ends). They exchange cruel insults, gossip, spread rumors and act rudely towards anyone thought to be involved in a scandal. Only one woman has the courage to address the gossiping that occurs when families are in distress. A young woman is hurt when she overhears her friend (and crush) speaking ill of her to other young men.

Family members reconcile differences, apologizing for the pressures they’ve placed on each other over the years and promising to do better in the future.

Another social season begins, this time with Anthony and Eloise Bridgerton searching for suitable spouses.

A naked man (we see his backside) collects his clothes. He pays several prostitutes (with their bodies hidden by blankets). We see a statue of a naked man. Men make crude comments about women’s bodies and attractiveness. Several men consider it acceptable to cheat on their wives (though one is criticized for “flaunting” his mistresses). We hear a man had a child out of wedlock. A woman hides letters in her bodice. We see another woman in her undergarments, which highlight her cleavage.

A woman manipulates the recent death of her husband to make people feel sorry for her. There is a casual, almost crass way of talking about people who have recently died. People generally treat women as objects. Characters lie. Many thinly veiled insults are exchanged. Many marital matches are made because of money rather than love.

People drink alcohol and smoke cigarettes and pipes. We hear the term “a–e” as well as the rude names “rake” and “chit.” Someone is called a “devil-doll.”

The Featherington and Bridgerton families begin the social season hoping to find good marriages for their children.

An unwed couple has sex a few times and we see partial nudity (though nothing critical). We see several young women getting laced into corsets and cleavage is on display. An unmarried woman realizes she is pregnant. We hear about a failing marriage.

A man grabs a woman with the intent of raping her, but she punches him and knocks him out. One woman slaps another across the face.

A woman is pressured to tighten her corset and later faints because she can’t breathe. (We also see that one woman’s corset cut into her back.) Another woman is criticized for her weight and blemishes on her skin. People drink, smoke and gamble. One girl purposely spills her drink on another to embarrass her. People gossip about the virtue of some women. We hear the f-word, “b–ch” and “d–n.”