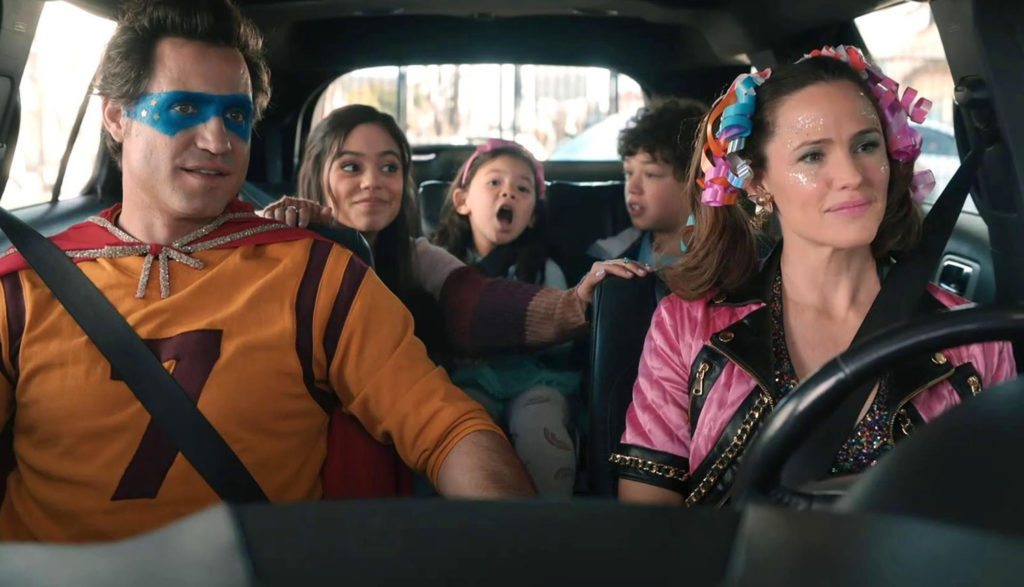 Ever wonder how you ended up being seen as the mean one, the parent who always says no? (I mean beside the fact that you’re loving and watchful and want to protect your kids from the ravages of the world that want to destroy them!)

OK … yeah. Well, that’s exactly how Allison Torres feels. She used to be the funone, back when she was younger. Her whole life was about saying yes. Wanna go rock climbing? Allison was first in line. Jump from an airplane? You betcha! Wanna play hooky and take a day at the beach? Yessiree, Bob!

Problem was, once she had kids and saw those little bundles of vulnerable innocence who need, well, a good wrapping of bubble wrap at just about every turn, her whole attitude changed. She had to start offering warnings and saying no all the time.

Of course, that made her the mom whose teen daughter writes a haiku for English class that talks about being held prisoner in a bird cage. She’s the parent whose son creates a movie comparing her to Stalin and Mussolini. She became the enforcer while her husband became the “fun” parent.

But then Allison came upon an appealing idea: a yes day. They’ll pick a day, and for 24 hours she and her husband, Carlos, will have to say yes to everything the kids ask for. And the only exceptions will be obvious ones, like doing something illegal or flying to Japan. You know, stuff like that.

Hey, that’ll show those kids what “fun” Allison looks like!

Of course, once she presents the idea and sees the gleam in her three kids’ eyes, Allison starts to sweat. This could end up being more problematic than it seemed, couldn’t it?

Being a family is hard work, this film tells us. It’s a constant effort to find ways to protect one another, while at the same time enjoying life together. But Allison and Carlos are a loving couple who take that charge to heart.

And even though 14-year-old Katie, 12-year-old Nando and younger sibling Ellie all want freedom to do things their way, they each learn that a loving family is important and that using common sense—the thing their parents tried to teach them—is essential.

A couple young guys lift up their shirts to demonstrate how ripped they are. And it’s implied that some older guys are taking young teen girls off to a private place to make out with them (though we don’t actually see that happen). One short statement implies that two female ambulance drivers are a couple.

In a jokey interaction, family members try and show young Ellie how to twerk, much to Allison’s chagrin. Allison also stops a younger version of son Nando from running out of the house dressed only in underwear and a cape.

Early on in the film, a flashback shows Allison and Carlos meeting and enjoying themselves in perilous activities, such as repelling down a mountain side and parachuting out of a plane. Later we see them transitioning into parenthood and hustling about to keep their kids from sticking metal objects into wall sockets and climbing out of second story windows.

During the Yes Day activities, Carlos is thumped in the crotch a couple times, each incident doubling him over in pain. He’s also attacked by a small flock of pecking birds that eventually send him to an emergency room. A large crowd of people gets pelted with water balloons, a thumping scene in which several fall down.

A large group of kids gathers in the Torres house while the parents are away, unleashing all sorts of havoc: They have a pillow fight, as well as breaking lamps and a TV. The kids also spray soda around and cause foaming, volcano-like reactions to spew forth from tubs and toilets, filling the house with foam. And they sled down the home’s front staircase on platers. (Then a parent runs in and puts an end to it all.)

Katie briefly meets a girl at a rock festival who appears a little stoned and confused.

There’s a bit of toilet humor in the mix. For instance, after eating huge amounts of ice cream as part of an ice cream-eating contest, Carlos runs to the bathroom. Everyone thinks he’ll be sick and lose. But someone checks and cheers out, “It came out the other end!”

There’s also some lying in the Yes Day tasks. The kids, for example, draw a huge group of people together through the false promise of  them being in a reality TV show. Other kids, outside the Torres family, purposely do mischievous things that create havoc in the Torres home.

Let’s face it, a parent who lets you do everything you want can be as much of a train wreck, family-wise, as one who won’t let you do anything. Sometimes a solid “no” is the best choice to make. That said, families saying yes together can be pretty incredible, too. There’s a loving balance to be found in that tension, and parents often struggle to find it.

That kind of balance is the lesson that this sweet, and occasionally eye-rollingly silly, little film wants to promote. It may not be the most deep and thoughtful movie night your family could say yes to. But you won’t be saying Oh, no! between fistfuls of popcorn either.