Win a Date With Tad Hamilton! 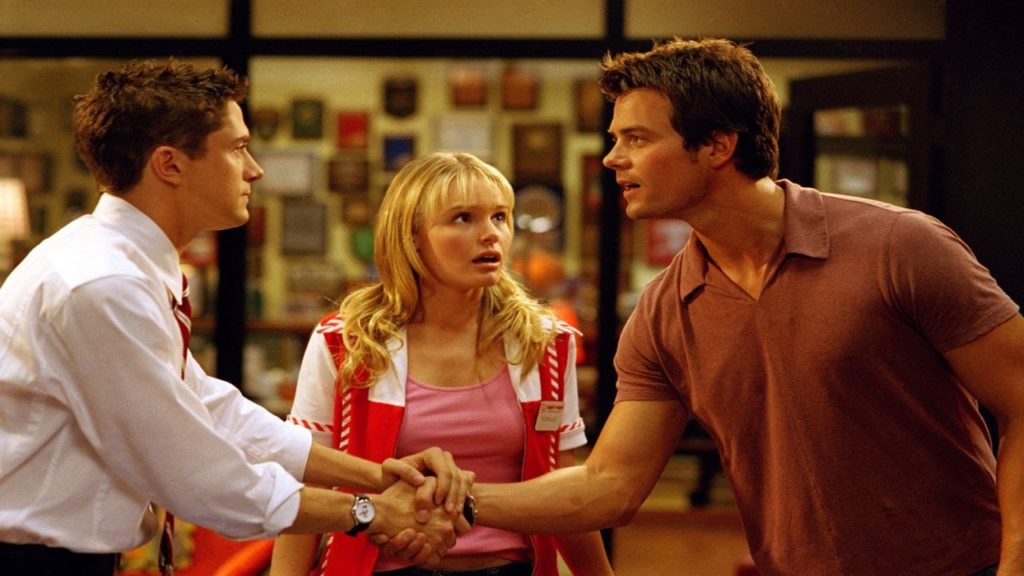 Rosalee and her two best friends, Pete and Cathy, work at the Piggly Wiggly in Fraziers Bottom, W.V. Rosalee and Cathy simply adore movie star Tad Hamilton, so when they see a contest promising the winner a date with the Tinseltown super-hunk, they quickly raise the money required to enter. As the movie’s title implies, one of them wins (Rosalee), and she’s whisked away to the bright lights and busy boulevards of Hollywood for a paparazzi-studded date with her dreamboat.

Back home in what now seems like Bumbleville, she gushes to her friends about every detail of her once-in-a-lifetime experience, never thinking for a second that she’ll ever again see Tad anywhere but on the movie screen. And that’s when he saunters through the door. It seems he’s as taken with her as she is with him. Her wholesomeness, down-to-earthness and small-town charm is exactly the same kind of intoxicant to him as his fame, riches and good looks are for her. (Think Notting Hill and the Brooke Shields-inspired TV series I’m With Her.)

Naturally, the whirlwind that is Tad whips up long-repressed feelings for Pete, and after reaching down deep for a jolt of courage, he confides to Rosalee that he loves her and doesn’t want to lose her to Tad. So Rosalee has to choose between the sweet, charming movie god—and indeed, he is a real gentleman to her—or her faithful, tried-and-true friend, the Piggly Wiggly manager.

The biggest positive theme running through the film is the biblical ideal that every person on the planet has value and worth. Intimidated by the looming presence of a movie star, Pete all but gives up on ever winning Rosalee’s heart. But when he exasperatedly exclaims to a sympathetic bartender (who herself has a crush on him) that he has no hope of beating out Tad Hamilton, she replies, “Everybody’s Tad Hamilton to somebody. To me, you’re Tad Hamilton.” Similarly, when Rosalee questions why Tad would be interested in her, a “nobody,” he counters with, “Nobody is a nobody.”

Tad realizes his priorities are out of whack and latches on to Rosalee as a way to figure out what matters in life. It’s clear that all his fame and success hasn’t brought him even half the level of satisfaction and happiness that Rosalee possesses while working as a check-out clerk at a supermarket. He repeatedly tells Rosalee that he wants her “goodness” to rub off on him and that he wants to get away from the damaging rat race Hollywood has become for him.

Rosalee never gives in to sexual temptation, even though everyone expects her to sleep with Tad (more about that in “Sexual Content”), and moviegoers get the rare privilege of witnessing firsthand a few of the right reasons people should fall in love with each other.

David and Goliath’s biblical death-match is referenced by Rosalee’s dad when he tells Pete that sometimes the giants do win despite such historical precedent (he voices the s-word in doing so). Before they meet him, Rosalee and Cathy wonder what “Tad Hamilton is doing right now.” Their conclusion? “I bet he’s in church.” Tad credits fate (“nature”) with making him fall for Rosalee. A priest admits to using an insincere line about friendship in order to get a girl to have sex with him—before he was frocked.

First, the good stuff: Rosalee doesn’t have sex with either of her male suitors. After her first dinner with Tad, he invites her to come back to his place. She accepts, but when she realizes that they’re all alone, she politely asks him to take her back to her hotel. He respects her request, actually praising her for not following the path so many other women have obviously followed while with him. Later, after they spend more time together back in West Virginia, they kiss and “make out” on more than one occasion, but when he moves his hand to begin unbuttoning her blouse, she gently pulls it away.

Meanwhile, Pete repeatedly urges her to guard her “carnal treasure.” His motivation for such speeches is partially rooted in jealousy, but he sincerely doesn’t want her to get hurt, and he’s convinced that once she gives in sexually, Tad will lose interest and leave her.

Elsewhere, women wear skimpy bikinis and low-cut tops, and Tad and Pete strip off their shirts to chop wood (what they’re really doing is showing off for the ladies). Tad is seen (shirtless) kissing an unknown female at his house. Cathy says several things that make you think of her as “loose and easy.” She says she wants to “intimately touch” whoever came up with first-class airline perks, makes up a sensual romance novel-style narrative about what Tad and Rosalee are “probably” doing together and offers herself to Tad in a brass, sexual manner.

A sexy Barry White tune sets the mood in one scene. A couple of un-classy slang terms are used for sex.

Tad’s agent slaps his manager (both are named Richard Levy) across the face to calm him down when they find out they have to fly back to L.A. on a commercial airliner. Footage from some of Tad’s movies includes war scenes and chase scenes. Pete crashes his car into a post.

There might not be any sex or drugs in this movie, but drinking is something of a different story. A bar serves as the backdrop to several scenes, and just about everybody downs suds at one point or another. Pete drinks heavily when he’s down in the dumps about Rosalee, and even the bartender throws back some hard liquor while on the job. Tad is seen recklessly drinking and driving (looking at a picture of his wild night printed in the Enquirer, his agent exclaims that it’s not often one sees a photo of someone “drinking, driving, smoking, littering and groping [his female companion] at the same time.” Trying to look cool and “with it,” Rosalee’s dad mixes up a chocolate martini for Tad (Tad, trying to turn over a new leaf, refuses the concoction, saying he’ll be driving later). Cocaine and the prescription drugs Percocet and Vicodin are mentioned but not seen.

Pete angrily confronts Tad in a bar restroom, opening the door to his toilet stall and carrying on a conversation with him while Tad sits with his pants down around his ankles. Rosalee throws up (off-screen) in Tad’s limo.

Step aside Sleepless in Seattle, Wedding Planner and My Big Fat Greek Wedding, there’s a new romantic comedy in town. It’s light. It’s fluffy. It’s glossy. It’s sweet. And it even manages to hang on to more than its fair share of morality. Win a Date With Tad Hamilton! is sure be the year’s oohiest and gooiest date-night movie, and it’s guaranteed to leave scores of young couples gazing adoringly into each other’s misty eyes long after the lights come up.

Love is grand. I fell in it and have stayed in it for over a decade now. And it’s been hard to watch as Hollywood has so consistently belittled it, sleazed it up, sexed it up and generally thrown dirt on it. Thankfully, Legally Blonde director Robert Luketic didn’t give in to that temptation. There are things about Tad Hamilton that take away from its wholesome appeal (drinking, profanity and uncalled-for sexual comments), but it possesses something few modern screen romances have: a soft center and a healthy heart.