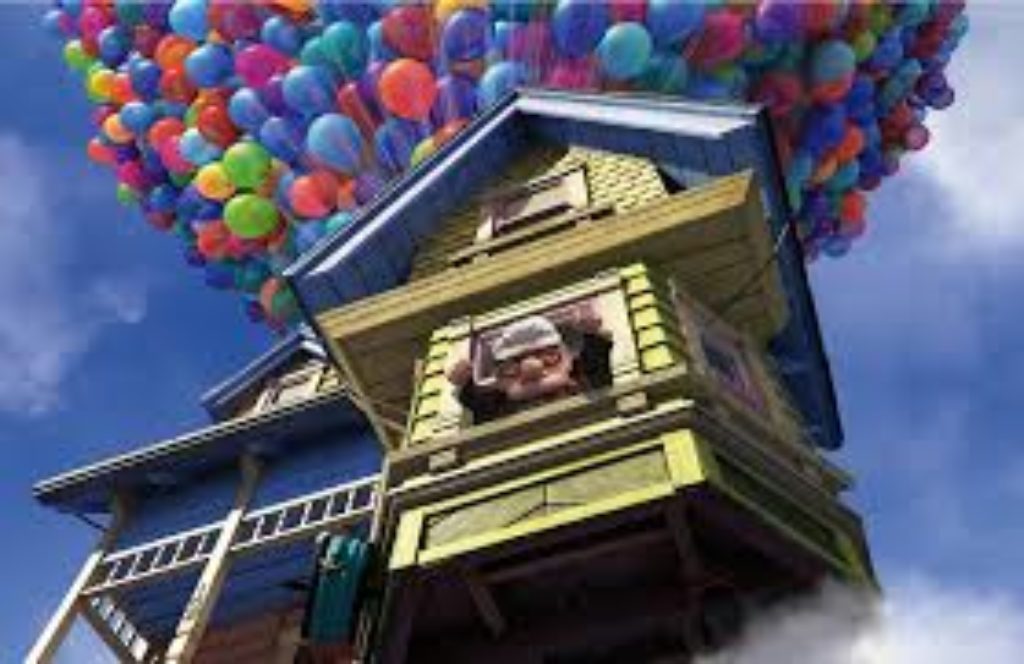 Sometimes we build our dreams like snowmen, in the morning glint of February. We build them high, snow upon snow upon snow, until they tower over our heads and seem to stand like glistening stone. But then the spring starts its work, diminishing our gleaming dreams drop by drop. They disappear in tiny rivulets of ice-cold water, by imperceptible inches, until all that’s left is a ring of greener grass.

Never mind that this is an animated “kids’ movie.” This is the philosophical stuff of Pixar’s Up.

For you see, Carl Fredricksen had just such a dream. He and his beloved wife, Ellie, planned one day to visit Paradise Falls, a mysterious locale in South America filled with cliffs and waterfalls and adventure. When they were children, Carl promised they would go there, cementing the deal with a somber crosscut motion over his heart. Throughout their marriage, the promise of Paradise danced in front of them.

But life kept intruding. They’d raid their Paradise Falls fund for flat tires, for home repairs, for all manner of everyday hiccups. Their hair turned gray, then white, and when Carl finally bought their tickets to Paradise, Ellie was too sick to go. Then … she was gone, leaving Carl with a houseful of memories, a heart full of grief and two plane tickets he’ll never use.

But a promise is a promise, and Carl had crossed his heart. So he loads his house with helium balloons and rips its thousands of pounds of wood and metal and carpet right off its foundation, floating out of the city and into adventure. He has just one destination in mind—Paradise Falls, and he’ll slice through the air until he reaches its hallowed—

Until he reaches its hallowed—

Carl walks to the door and finds a boy named Russell, a Wilderness Scout with a sash full of merit badges and a brain full of chatter, cowering on his swaying porch.

“Hello, Mr. Fredricksen,” the boy says, clinging to the siding for dear life. “Please let me in.”

But then he opens it again.

So begins a new sort of dream for Carl, though he doesn’t know it yet. He still thinks he’s saving his snowman—his dream, his promise, his adventure, his treasure. But what he’s about to find out is that while there’s no denying that snowmen are cool and all, what’s really important is underneath—the lush circle of spring grass left behind. Green. Growing. Living.

Carl’s a grouchy old coot, but we love him anyway. We can’t help it, really. He clearly adored his wife from the minute they met to the moment she was taken from him and far, far beyond. He takes the trip for her, and he continues to talk with her throughout the film. Carl preserves her memory in every way he can—even wearing a badge (a grape soda bottle cap with a pin stuck through it) that Ellie made for him when they were children.

And the fact that he holds true to a 70-year-old promise is, frankly, incredibly inspiring.

But while his devotion is laudable, how Carl carries it out violates Ellie’s free-spirited essence. Carl’s house is brushed in shades of mausoleum gray—a stark contrast to the brilliant balloons lifting it aloft—a suggestion that Carl’s not really living, but holding stagnant in a state of constant preservation.

In bounces Russell, with his brilliant, balloon-like merit badges and his buoyant personality. He has just one badge left to earn—his “assisting the elderly” badge—and he aims to assist Mr. Fredricksen, whether the old guy likes it or not. Along the way, he shows voluminous reserves of compassion, courage and creative problem-solving. It is he who becomes the film’s moral compass: As Carl struggles with his house and his stuff and the weight of his grief, it’s Russell who has a better sense of what’s really important—even as he himself struggles to come to terms with a father who, through some vaguely revealed circumstance, has grown ever more distant. Russell tells Carl that he and his dad used to get ice cream, sit on a street corner and count cars.

“It might sound boring,” Russell admits. But I kinda think it’s the boring stuff I remember the most.”

The pair’s trip to Paradise Falls is anything but boring, but through it Carl learns a bevy of valuable lessons involving family, friendship, commitment and materialism. And before it’s all over, he passes on the grape soda badge—which he calls the “Ellie badge”—to Russell.

After Ellie dies, we see Carl sitting—mourning—in an empty church.

Of course, nearly every major character in Up spends some time dangling from dizzying heights, afraid that they’ll fall down. This leads to loads of tense moments—stuff that feels, frankly, a tad more perilous than you’d expect in a “cartoon.” (Or maybe that’s just the 3-D projection and my fear of heights talking.) One character does plummet to the ground from a presumably fatal height, and several dogs fall off a cliff into a waiting river.

Carl becomes a geriatric action hero, “sword fighting” with a bad guy (longtime adventurer Charles Muntz) with his cane (an encounter that leads to bruises, a thrown-out back and a gigantic mess). Muntz fires at Carl with a shotgun and sets the house on fire.

Plane-flying dogs shoot what look to be tranquilizer darts at their quarry (Carl, Russell, a dog named Dug and a huge, flightless bird named Kevin). Dug gets bitten by the fearsome pack leader at least twice, and he tumbles down the side of a shallow cliff. A dog bites Kevin’s leg, drawing blood.

As a child, Carl falls through an attic floorboard and accidentally smacks himself in the face with his own arm cast. As an adult, he thwacks a poor, innocent construction worker with his cane. (The construction worker’s knocked out, and he appears to bleed a bit.)

Dug—who, like all the dogs in the movie, can talk thanks to a special dog collar—makes a joke about a squirrel, concluding it by saying, “It is funny because squirrel gets dead.”

The short feature Partly Cloudy (shown before Up) displays a character getting chomped by an alligator, butted by a ram, skewered by a porcupine and shocked by an electric eel.

Muntz’s pack of well-trained dogs serves dinner to Muntz, Carl and Russell—including wine for the two senior citizens. It’s hard to tell how much liquid actually gets in the glasses, though, since pouring vino is something the pack hasn’t quite mastered yet. The era of prohibition is mentioned.

Wanting to get rid of Russell, Carl fantasizes about making him rappel down to a skyscraper rooftop—and in this daydream, the plan goes awry and Russell falls. Carl initially reneges on a promise to take care of Kevin.

We learn that Ellie ripped a page out of a library book to paste in her adventure scrapbook. Carl lies to a couple of retirement home workers when they come to take him away, saying he’s going to say good-bye to his home for the last time (when in reality he’s about to launch it into the air). One of the workers says that he’s “probably going to the bathroom for the 80th time.” Speaking of bathrooms, Russell relieves himself in the jungle. (The act takes place offscreen, but we see the boy tamping down a pile of dirt that covers his makeshift latrine.)

“A people are as healthy and confident as the stories they tell themselves,” wrote Nigerian poet and novelist Ben Okri. “Stories can conquer fear, you know. They can make the heart larger.”

Up is exactly the kind of thing Okri was talking about. It transcends cartoon. It transcends film. It is a story, and a story in the word’s best, most mythical sense—a narrative that educates and entertains, a fairy tale that can make your heart larger. It makes me wonder, again, why more people aren’t making films like this. And I’m beginning to think they simply don’t know how.

Pixar, though, has been making worthwhile movies for nearly 15 years now, and the stories keep getting stronger. Up‘s sense of literature and symbol could be studied on many a college campus, and its themes would not be out of place in a church service. While it doesn’t deal in theology or spirituality, its morals are from time-tested biblical bedrock: Keep your promises. Treasure people, not things. Spend time with your kids. Honor your elders. Respect. Trust. Love.

And it’s a gut-busting hoot to boot.

A postscript: I’ll have to spoil a rather major plot point as I write the next few paragraphs—but it’s worth it, I promise. In many (most) modern kid flicks, young audiences are told to “follow their dreams.” This is a message that simultaneously resonates and repels. While there’s real value in dreaming big, we shouldn’t let those dreams sidetrack us from what God has in mind for us: As painful as it can be, sometimes our dreams need to melt.

In Up, we see a dreamer disappointed. A dreamer who feels betrayed by life’s circumstances. His eyes tear up when he thinks of Ellie’s apparently empty scrapbook—the one that was to hold pictures from all their daring adventures together, the one in which Ellie wrote, as a child, “Stuff I’m going to do.”

On the last page is a note from Ellie. “Thanks for the adventure,” it reads. “Now go out and get a new one!”

Few of us live our lives exactly as we plan them. Some of our dreams go unfulfilled. Some of them are unfulfilling.

Yet even in the midst of final exams, trips to the grocery store and even tragedies we can never prepare for, we’re still impossibly, gloriously blessed. Sometimes we just need to forget the snowmen that’ve melted and look at the living, lush grass underneath.

Up helps us do that.