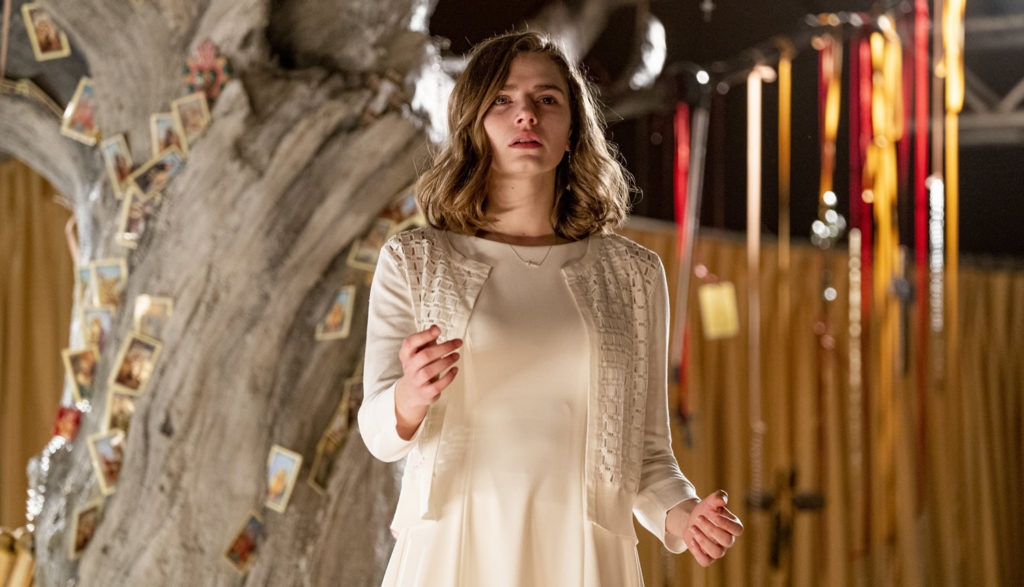 That’s no typo. Fenn, a one-time big-city newsman, was drummed out of the business for fabricating stories. For him, staying in the spotlight was more important than telling the truth. But the lies caught up with him, and he lost his spotlight anyway. Now he works for a website of questionable authority, writing stories of dubious importance. And he hasn’t learned his lesson yet.

His latest assignment: cattle mutilations in Banfield! Exciting, right? But when Fenn drives up to this quiet Massachusetts town, he discovers the “cattle” is one solitary cow and the “mutilation” is a Metallica symbol on the bovine’s rump, stuck there by the rancher’s 15-year-old son. Not exactly front-page news.

But Fenn does spot a creepy little doll nestled in a dead tree nearby. Even creepier: The doll’s tied up with a little doll chain that also holds a doll-size plaque bearing a date: Feb. 31, 1845.

The reporter doesn’t contemplate this doll or its impossible date for long. He’s got a story to sensationalize, after all. So he smashes the doll and tells the local rancher to pretend he found it. Fenn can see the headlines now: Doll Unleashes Evil Cattle Mutilations in Banfield! He’ll worry about concocting actual cattle mutilations later.

But over the next few days, Fenn will come across a real story. He’ll meet young Alice along the road that very evening and watch her say a prayer by that dead oak tree—say a prayer, even though she’s been deaf pretty much her whole life. The next morning, he’ll watch her walk to that same tree, turn around and speak to a throng of churchgoers—announcing that she’s been healed by the Blessed Virgin Mary.

And Fenn will eventually have much reason to wonder as to just who this Mary is. Is it truly Mary, the mother of Jesus, who’s using Alice as a conduit for divine miracles? Or might this unseen Mary derive her powers from more diabolical sources?

The cows are just fine, thanks. But did the doll release evil? Maybe Fenn’s imagined headline is half right.

Alice is sort of like a Typhoid Mary of evil: She may be a carrier, but she doesn’t intend to be. In fact, she thinks that her own cure, and the miraculous healings she’s able to give others, are truly a gift from God. She’s very sincere about her desire to help people.

We meet a couple of do-gooding priests, too. Father Hagen has served as Alice’s guardian for most of her life, and he’s naturally thrilled when she gets her hearing back. But he’s also wary of the events surrounding that seeming miracle.

Monsignor Delgarde is equally suspicious. It’s his job. As one of the Catholic church’s modern-day inquisitors, he’s sent to Banfield to investigate these happenings and do his best to debunk them: He’s after the truth, not some fabricated miracle, and that’s a good thing. And when Delgarde finds something that is neither fraud nor miraculous, he shows considerable courage in facing the evil he discovers.

In contrast, Fenn is not a particularly great person. But he gets better as the movie goes along. And you could make the case that he winds up making a sacrificial act to save many, many others.

[Note: Spoilers are contained in this entire section.] The movie kicks off with an apparent miracle and ends with a Bible verse (Matthew 7:15, “Beware of false prophets, who come to you in sheep’s clothing but inwardly are ravenous wolves”). And in between, you’ll find more spiritual content than in many a Christian movie. However, the results are a bit mixed.

The evil we find here definitely draws its power from a diabolical source: The “Mary” we meet was not the Mother Mary, but an 18th-century witch who was granted the power by the devil to grant apparent miracles. (She says as much while literally in a confessional booth.) She masquerades as the other, better Mary to lead people astray and claim their souls for hell. This, by the way, is pretty interesting: Not many secular films today concern themselves with the state of one’s soul in the next life. But this one does.

The story also talks about how faith and religion can be corrupted in this life, too: Alice heals a few people and quickly becomes a celebrity—complete with merchandise that includes the cringeworthy hashtag #AliceSaves. One Catholic leader is all too willing to accept Alice’s miracles for the sake of re-energizing the Church, too—covering up more problematic aspects of the story and pushing forward a secretly unholy service that, if Mary has her way, will damn plenty of people.

These spiritual messages come freighted with some other bad theology, too, especially the idea that this infernal lie can be combatted with a lie of its own. (We don’t have a lot of space to unpack that statement here, but I talk about that more in-depth elsewhere.)

And that’s not the only disturbing element we see. Statues of Mary and other saints weep blood. A massive crucifix bursts into flames (along with many, many smaller ones, too). Words appear to melt off the pages of a Bible. A priest discovers something that looks to a notebook filled with pictures of demonic-looking entities, one of which seems to be performing some sort of priestly role. “Miracles” with an unholy source are performed and officially sanctified. In a flashback, we see someone pray/curse Mary before her execution, and they permanently stick an image of the mother Mary over her face.

Elsewhere, a priest quotes Martin Luther: “When God builds a church, the devil builds a chapel (next door).” We hear variations of that quote throughout. References are made to some other miraculous locals, including Lourdes and Fatima—with the priest noting how many people originally involved suffered afterward. (He’s suggesting that, while the miracles were real, some of those involved were subject to spiritual warfare.) A doctor tells Fenn, “Science and God are not mutually exclusive.” We see plenty of religious services and outsized devotion to Alice and “Mary of Banfield.”

Someone seems to undergo a sincere religious conversation. The role of confession in redemption is discussed. A prayer to God is answered miraculously. An old associate of Fenn’s tells him that he’d “sell his soul for a story.” (Later, Fenn confesses that that seems to be more true than you’d think.) Fenn finds a “kern doll” near the beginning of the film, dolls which are typically good luck charms. But we’re told that they’re sometimes thought to act as spiritual vacuum cleaners, sucking up bad presences and holding them.

Someone dies by suicide; we see the body hanging from a rope. Others die via incredible heat—with one person apparently being crushed underneath a flaming crucifix. (The other two times, someone’s touched by an overheated, supernatural hand.) A supernatural event triggers a human stampede, and a boy is nearly crushed by those rushing to get out. Fenn crashes his vehicle into a tree (but luckily doesn’t hit someone walking in the middle of the road). We hear that Alice’s parents died.

Mary was subjected to some rough treatment when her service to Satan was discovered. First, they submerged her in an icy stream to extract a confession. Then a mask of the Virgin Mary was nailed to her face before she was hung. Later, her body was burned. We see evidence of all these indelicacies: A noose is still wrapped around the specter’s neck, and when her deceptively virtuous mask is finally removed, the face underneath is devoid of skin.

Fenn is your stereotypical washed-up, hard-drinking journalist. We see him pour something from a flask into his coffee, and he struggles to grab a bottle of liquor from the car floor before nearly crashing into someone. Catholic Mass makes use of communion wine, and we see a chalice of wine in the background in a scene or two. Fame is compared to a “drug.”

Father Hagen tells Fenn, “There’s nothing that Satan likes more than to corrupt our faith.” That’s probably true. And that’s probably why walking in faith can be so difficult at times. Satan, after all, is an expert deceiver.

It’s here—in its examination of that deception—where The Unholy is at its strongest. For much of the movie, it warns us both about blind faith (as seen by Alice’s growing horde of believers) and the temptation to use faith as a means to an end (as shown by a corrupt cleric). The film accepts God as fact, but it insists that our fealty to Him should be based on a blend of mind and soul. And if you stretched things a bit, you could even read The Unholy as a warning to believers today, given that false prophets don’t always visit us as matinee monsters.

But perhaps that’s giving the film too much credit. Because, let’s face it, the monster’s the main attraction here—and for many, that’s no attraction at all.

Though not wildly gory, the film contains plenty of disturbing and, to a point, even blasphemous images (a burning crucifix pops into mind). The story tells us that evil sometimes gets the better of good people. And it seems to lose its own train of thought, undercutting positive messages with others that contradict them, mashing the messages here into a major spiritual muddle.

The Unholy, released on Good Friday of 2021, might be one of the year’s most spiritual movies. But let’s be honest: Just like the demonic entity we see here, that’s not altogether a good thing.