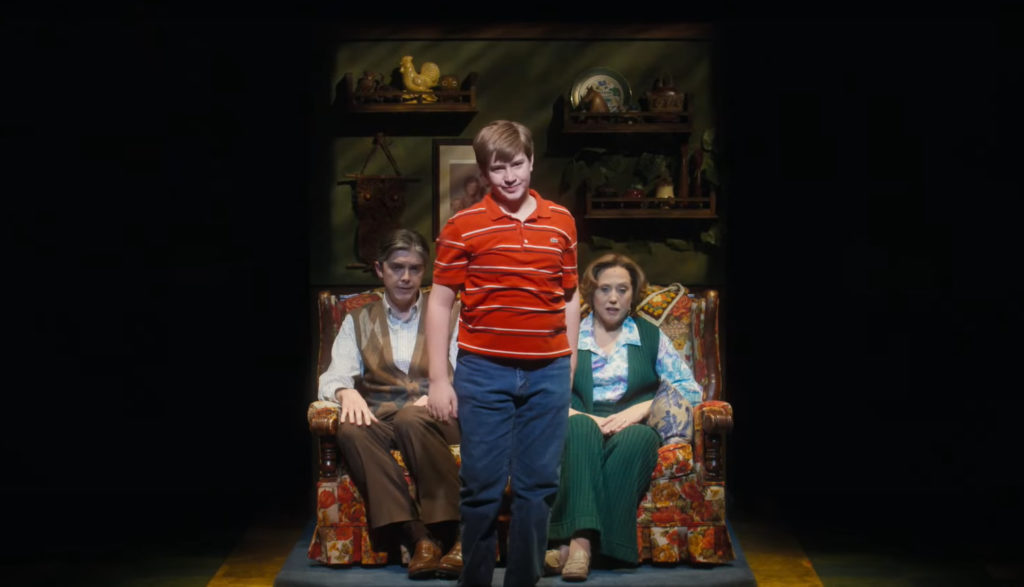 Trevor’s always been a bit different than all the other boys at his school. He’s not into sports. He loves to dance. And he absolutely adores Diana Ross. Those three things alone would make many other middle school boys in the early 1980s say, “Weird.”

That’s why Trevor’s not really sure how to feel when he starts having these weird feelings for Pinky, another male classmate. As far as he’s aware, he’s supposed to be having those feelings for a female classmate. But maybe it’s just another weird thing for Trevor to get used to.

So, Trevor does what he always does: He writes about it in his diary. He writes all about these strange feelings he’s been having, and he makes it abundantly clear which classmate he’s referring to.

And when someone just so happens to find his diary and spreads its contents all throughout the ticklish ears of his classmates, Trevor can only watch in horror as everyone realizes the truth: Trevor is … weird.

Though they’re not sure how to proceed, Trevor’s parents genuinely do their best to comfort and love their son. Trevor learns to not listen to the bullying he gets at school. Even after being abandoned by his friend Walter, Trevor forgives him, and the two become friends again. Though Trevor briefly tries to hide the fact that he enjoys Diana Ross, he eventually accepts that his music choices aren’t anything to be ashamed of.

Trevor’s mother crosses herself. Trevor is sent to see a priest regarding his homosexual thoughts. A priest jokes that ice cream isn’t a sin.

The central theme of Trevor: The Musical focuses on Trevor struggling with his homosexual thoughts.

Trevor has a dream about dancing with Pinky and writes affectionately about him in a diary.

One song here focuses on fantasizing about women in a lingerie magazine. Another song is about kissing at the school’s “make-out spot.” A priest references sexual arousal. Walter and Cathy attempt to kiss but are stopped. A character sings “I’m Coming Out” while wrapped in a rainbow. A character wears a revealing leotard.

Trevor gets pushed into lockers by a classmate. Trevor writes a suicide note and attempts to take his life using over-the-counter medication. A hate letter tells Trevor that he doesn’t deserve to live. There are many references to the Ronald Reagan assassination attempt in this early ‘80s period piece.

God’s name is misused four times. Trevor is called a “f-ggot” once and is frequently belittled as “weird.”

Pinky talks about getting to try alcohol when he’s older. A character makes a reference to wine.

Children run or hide from police.

Middle school is a weird stage of life. Many people will cringe thinking back to certain painful moments during that time. Some of us may have felt that those fleeting middle school relationships would define us for the rest of our lives.

Now, if you’re reading this, chances are, you’re grown up and are well beyond the middle school realm. But for Trevor, he’s still at that stage where middle school is everything. So when his social sphere comes crashing down, it feels like the end of his life.

Trevor’s at that age when he’s learning all about relationships and love, but he’s finding that he’s not attracted to girls—but to other boys. And if Trevor’s niche interests weren’t weird enough to ostracize him already, his sexual orientation definitely is when it becomes accidentally public.

As Trevor deals with the bullying that ensues, he can’t help but wonder if something is wrong with him. Why can’t it just be easy? Why can’t he just like girls? Why does he have to be so weird?

Trevor finds his solution in ignoring his bullies and coming to terms with who he is—despite the criticism he continues to get. He finds something like peace as he accepts his attraction to those of the same sex.

But we must separate sympathy and decency—both of which Trevor absolutely deserves—from the issue of homosexual attraction here, something most young viewers (and many older ones, for that matter) may well have a difficult time doing.

For many in our culture, accepting Trevor—or those who have similar stories—means automatically affirming their behavior, too. But in Scripture, we see Jesus practice something different in the story of the woman caught in adultery. Jesus doesn’t condemn her. But He doesn’t minimize the fact that she’s strayed from God’s law, either, saying, “‘Neither do I condemn you,’ said Jesus. ‘Go, and from now on do not sin anymore’” (John 8:11).

Our culture is largely unable to emulate or even understand how Jesus offers both grace and truth, how He can differentiate between someone’s sinful behavior and his or her identity. But stories like Trevor: The Musical reinforce the opposite message: that what you do is who you are.

This movie embraces the seemingly gracious, but ultimately misguided idea that to love and accept someone means affirming all of their choices, too. Instead, what it offers is a secular version of grace at the expense of truth, one that refuses to acknowledge that some choices are not how God has designed things to be.