Timmy Failure: Mistakes Were Made 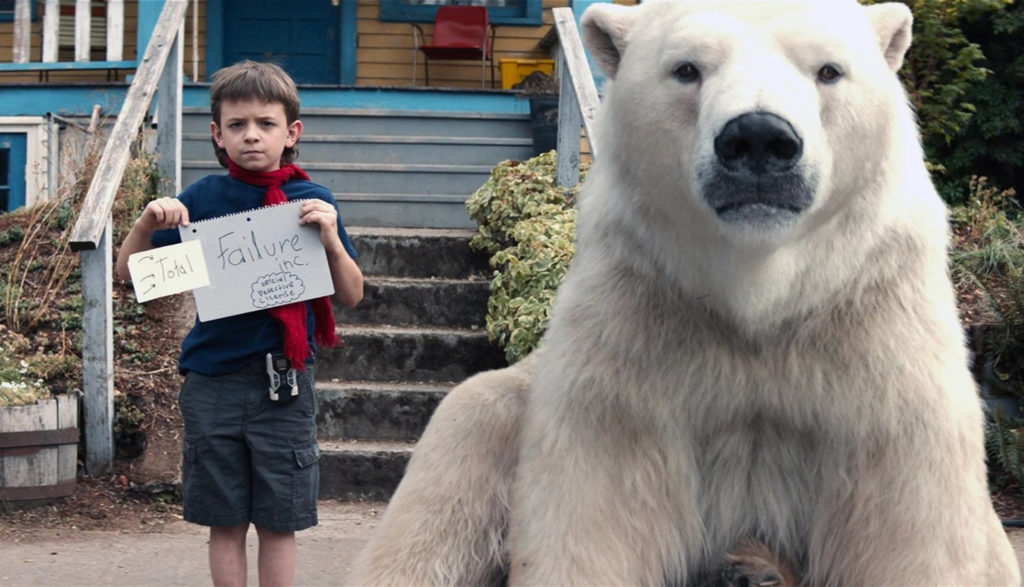 A child backmouths his teacher, a Segway goes missing, and a truck wrecks someone’s home. But if you’re expecting a “sorry” from the boy responsible, don’t hold your breath, because the closest Timmy has ever gotten to uttering an apology is saying, “Mistakes were made.”

Fifth-grader Timmy Failure runs a detective agency out of his mom’s closet called Total Failure, Inc. “We won’t fail, despite what the name says,” he tells his clients. Unfortunately, he and his partner Total (a 1,500-pound polar bear) seem to cause more problems than they solve.

His dedication to his work often results in him neglecting the things he should be worrying about—like doing his homework, playing with other kids and following the rules. But since it’s all in the name of cracking the case and defeating the Russians (who he believes are responsible for all the wrong doings in Portland), he’s not going to give in to his mom’s and teacher’s “absurd” requests to act more normal.

Timmy’s mom, Patty, is single and works two jobs, often leaving the 5th-grade boy home alone. But even when she’s frustrated with him and says the wrong things, it’s very clear that she loves him and just wants him to be safe. She apologizes to him for losing her temper and encourages him to be himself in spite of what other people think.

A school guidance counselor (Mr. Jenkins) and Patty’s new boyfriend (Crispin) both make efforts to gain Timmy’s trust. Because they take his imagined concerns seriously, they are able to get Timmy to open up emotionally and help him work through some of the underlying issues he has had since his dad walked out on him and his mom.

Timmy often complains about Total’s behavior, issuing demerits when the polar bear digs through trash or goes swimming on the job. However, when he has to bid farewell to Total, he cries and hugs the bear. And later on, he says that despite Total’s flaws, Total, like all animals, is capable of greatness.

Despite constantly being at odds with one another, Timmy admires his teacher, Mr. Crocus, and even tries to save his life when he thinks Mr. Crocus is in danger. A librarian admits she doesn’t like children but still wants to teach them to stand up for what they believe in. Crispin says he became a meter maid (a despised profession) in order to change people’s perspective about the job.

We hear that Timmy’s mom and his classmate’s parents attend church. In a speech, someone says “God bless” the school, the town and a teacher. A water tower sports a graffitied picture of an alien. Someone reads the book Eat, Pray, Love.

Timmy imagines the “World Naked Bike Race” as hundreds of people riding bikes in nothing but their underwear (we see shirtless men in boxers and some women in sports bras and biker shorts). We catch a glimpse of a professional dancer’s bloomers when she twirls.

A man gets punched in the face and then is tackled to the ground. A truck crashes through a man’s home, though nobody is harmed. A woman smashes mailboxes with a bat. A samurai wields two swords in a threatening manner and a young boy is set to face him with nothing but a pocketknife. Someone goes over a waterfall in a barrel. A boy falls to the ground after running into a door. Children take a fencing class.

We see the body of a dead hamster. An injured bunny and bear are treated in an operating room. A bear roars at a man to scare him. Beavers growl at a boy before attacking him (offscreen).

An inmate says he is in prison for murder. Timmy says he hurt himself when he backed a vehicle into a light post. Someone says a dog can maul an intruder.

God’s name is misused twice. There are also some close calls with “loser,” “crap,” “weirdo,” “shoot,” “holy smokes,” “screwed” and “geez.” Someone says “for the love of…” but is cut off before they can finish the sentence.

People drink beer at meals. Crispin brings a case of beer to dinner.

In a quick flashback, Timmy’s dad walks out on the family because he is unhappy with his life. Timmy’s mom yells at him, obviously heartbroken.

Timmy often disobeys rules and instructions. He breaks promises and he lies. He causes angst for those around him. And he gets his friend Rollo into trouble for breaking glass figurines in a store and attempting to rob a bank. He also entertains a vivid conspiracy theory about Russians wanting to take over the world, imagining them listening in on his conversations and trapping a man in a water tower.

Timmy enters the restricted area of a dam during a school field trip, putting himself and Mr. Crocus (who was chasing him) into danger—though they learn afterwards that the danger was never real.

A man steals a woman’s purse. A middle-school boy listens to screamo music while using a knife to carve a wooden stake. A girl talks about a man who died. Someone calls the police corrupt.

Timmy Failure, despite his name, is not a failure. Yes, this ever-scowling little boy makes many mistakes on his detective adventures, but he eventually learns how to own up to them and even how to apologize for them.

To any adult watching, it’s very clear that Total is an imaginary friend who Timmy created to fill the void when his dad left. Now, while the psychology of that might be lost on younger audiences, it’s still really heartbreaking when Timmy says a tearful goodbye to Total, considering he doesn’t really have anyone he can trust.

The grown-ups in Timmy’s life step up to the plate and strive to teach Timmy about valuing the thoughts and feelings of other people. They foster companionship with him by confessing their own weaknesses and apologize for their shortcomings. And eventually, Timmy realizes that he can trust these people with his own thoughts and feelings without fear of rejection or scorn.

It goes to show that even though mistakes are made, nobody is a failure—not even Timmy Failure.