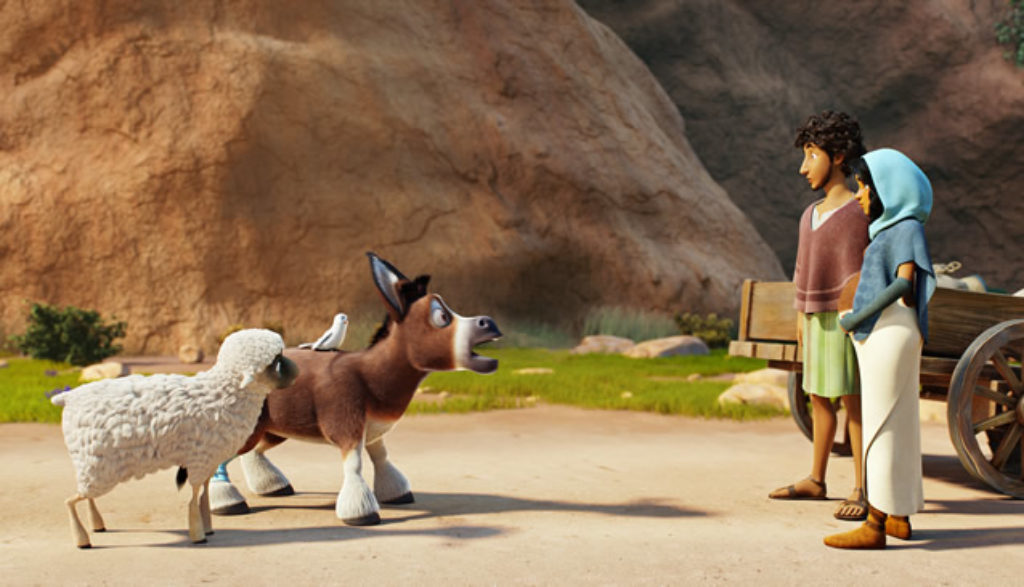 Donkeys don’t dream. Well, not in an aspirational, “follow your dreams” way, at any rate.

But Boaz is no normal donkey. Marching in a circle grinding grain is not Bo’s vision of destiny fulfilled. No, Bo and his friend, Dave the dove, harbor royal aspirations: marching at the vanguard of the king’s caravan.

Bo breaks his bonds and flees his angry owner, but an injury to one hoof keeps him from fleeing far. He soon takes refuge in the courtyard of a young couple named Joseph and Mary. And the tenderhearted, miraculously pregnant young woman tends to Bo’s hurt hoof.

Meanwhile, a dazzling, mysterious star has appeared in the heavens. That blazing object prompts three wise men and their camels—Deborah, Cyrus and Felix—to begin the long journey toward, well, actually, they don’t know quite where. But they’re convinced the celestial sign portends the birth of a king.

Someone else has taken anxious notice of the star too: King Herod. It means something. But he’s not sure what. The unexpected arrival of the three visitors from the East only amplifies his paranoia, especially when they carry on about bringing gifts for a king—a different king than Herod.

Back in Nazareth, the birth of Mary’s baby is now fast approaching, but she and Joseph must take a long trip to Bethlehem for a census ordered by Herod. Little do they realize that their craven ruler has ordered a speechless, ogre-like henchman and his two fearsome dogs to track down the identity of this would-be king … and end his reign before it begins.

Thankfully, Bo makes the perilous journey with them, fulfilling a bigger destiny than he could have guessed in his wildest donkey dreams.

Throughout the film, Bo, Dave and a sheep named Ruth (whom they meet along the way) encourage and help each other as they try to protect Joseph and Mary from Herod’s hunter and his dogs. Bo is also willing to sacrifice his dream (as is Dave) to protect Mary once it’s clear that she’s in peril.

Conflicts occasionally threaten to split up Bo, Ruth and Dave. But during one falling out, Ruth implores desperately, “Flocks stick together!”

Elsewhere, Bo tries to convince Dave to pursue their original dream on his own. But Dave replies, “The royal caravan was our dream. But the best part was that it was gonna be us. If all I wanted was to flap around a bunch of funny wagons, I would have done that a long time ago. … Look, you lead the way. And wherever you go, your best friend, Dave, will be right behind you.” (Dave’s soliloquy, of course, echoes events and language in the biblical book of Ruth, as do several characters’ names here.)

An old donkey with whom Bo grinds grain plays a key part in helping Bo escape the mill at an opportune moment.

The Star tells the story of Jesus’ birth largely from the perspective of talking, thinking animals. But within that obviously fictional storytelling context, it also stays quite true to the biblical narrative of Jesus’ birth in most of its details.

We’re only a few minutes into the film, for example, when Mary is confronted by an angel who announces, “Fear not. For you have been favored by God to conceive and bear a son.” Mary responds, “A son? But how?” The angel answers, “The Holy Spirit will overshadow you. And the child will be called the Son of God. For nothing is impossible with God.” Mary stumbles a bit in her response initially, but then says, “I mean, yes, let it be done just as you say.” At that moment, the room is filled with a great light, signifying—it would seem—the immaculate conception of the child, followed by the same light zooming off into the sky to become “the star.”

A mouse who saw the whole thing tells her friends, “The room was filled with magical light. And the angel said that the child would be our new King!”

Talking about the star, Bo tells Dave, “See! I told you that star was a sign. We’re meant for something greater than this.” But an old donkey who Bo works with tries to discourage his dreaming, saying, “Look, kid, we’re mill donkeys. We grind grain. We don’t carry kings.”

Joseph is incredulous when Mary finally tells him the story of the baby she’s pregnant with. “The Messiah?” he says. Mary responds, “God wants you and me to raise him.” But Joseph is doubtful: “I can’t raise the Son of God. He’s a king. I’m just a carpenter. … I mean, who am I?” Mary reassures him, “You’re my husband.” Joseph apologizes for his insecurities, saying, “It’s too much to take in.”

The couple faces more struggles and uncertainties on the dark, lonely road to Bethlehem. Mary tries to encourage her frustrated and frightened husband, saying, “This must be part of God’s plan.” Joseph responds sarcastically, “So far this plan is going great. I can’t wait to see what happens next.” He voices his discouragement to God in prayer: “Lord, I can’t do this, alright? I am not the father of a king, just the son of a carpenter.” Like some characters in the Old Testament, he then asks for a sign—and gets one in the form of Bo returning after the animal had left in anger a few minutes before.

Mary realizes that faithfully following God’s plan doesn’t guarantee a painless path forward. “Joseph, you were right,” she tells him. “This is hard. Trust me, I know it is. Just because God has a plan doesn’t mean it’s going to be easy, and that scares me.” Now, however, the encouragement shoe is on the other foot, as Joseph responds, “Hey, I’m scared, too. but I’m here. And I’m yours. And I will give everything I have to keep you and the baby safe.”

We hear a similar conversation as Mary goes into labor and is fearful that she and Joseph haven’t been able to find an inn. Mary soon gives birth in a manger that Bo finds for them, and she’s surrounded by adoring and awestruck animals, as well as the three wise men who arrive to bequeath their gifts upon the newborn baby, Jesus. At that moment in a field of shepherds, an angel announces, “Fear not: I bring good tidings of great joy. For unto you is born this day a Savior, Christ the Lord.”

Bo prays for God’s help in a desperate moment, too. [Spoiler Warning] And even the two dogs that have hunted Mary seem to have a canine “conversion experience” of sorts. One of the dogs, Rufus, tells Bo, “We’re bad dogs.” But Bo counters, “You don’t have to be. You’re free now.” Rufus later asks his fellow hunter, “Thaddeus, are we good dogs now?” And Thaddeus says, “We have to try.”

Deborah the camel (voiced by Oprah Winfrey) says, “You know, I think people are gonna remember this night. What happened here around this manger will be celebrated for thousands of years. Families will come together and exchange presents and sing carols, all to remember the grace of this moment that we are witnessing right now.”

Various traditional Christmas carols (“O Holy Night,” “Little Drummer Boy,” etc.) can be heard throughout the movie. We also hear the songs “His Eye Is on the Sparrow” and “Mary Did You Know?” An original song for the film encourages, “Follow you heart. Follow the light. Follow that star.”

No sexual content. But Joseph and Mary do have a veiled conversation about how she could have become pregnant that is—understandably—difficult for Joseph to comprehend and accept. Another scene shows them lying down next to each other, back to back, as they go to sleep. Joseph is shown tenderly kissing Mary’s forehead.

The soldier who hunts Mary and Joseph with his two dogs, Rufus and Thaddeus, never speaks, lending him an ominous and foreboding feel. A couple of times he’s about to pounce on Mary when Bo and Co. manage to divert him. We see him begin to pull a sword, and it’s clear that he means Mary mortal harm. We also see the soldier choke someone. The animals protecting Mary knock the silent soldier into a well at one point, and over the top of a tall bridge in another scene. (After the fall, we see him unconscious, or perhaps dead, on the ground below.)

Speaking with his scribes, Herod threatens, “If you people can’t find this one child, then I’ll have to kill them all,” an obvious allusion to what does, in fact, happen in Scripture.

Bo’s madcap escape from the mill involves the Miller getting bonked in the head and knocked out cold, one of quite a few moments of mild violence that’s played more as slapstick humor than as genuine peril.

Dave tells a brood of chickens, “Ladies, run!” when he realizes that people are using them for food. Bo falls down a ravine and lands, humorously, on top of Dave.

Dave the dove says “Nazareth can kiss my gleaming white tail feathers goodbye.” And when he coaches Bo on trying to escape from Mary and Joseph’s courtyard (an idea Bo briefly entertains early on), Dave says a “well-placed No. 2” will motivate the humans to get rid of him. Dave also quips, “I gotta be honest: I’m very upset right now. I’m gonna go find somebody to poop on.” After Bo falls on Dave, the donkey can’t find his friend, prompting Dave to say, “I’m right here on your butt.”

Hollywood has often taken liberties with beloved biblical stories in ways that have riled the faithful, with Noah and Exodus: Gods and Kings being two of the more recent examples.

The Star, thankfully, will not be joining that list. This film tells an imaginative and sweet version of Jesus’ birth—from the point of view of animals—while remaining faithful to the biblical narrative. Tyler Perry, one of many A-list stars to lend their voices to this production, said of it, “This is such a clever and genius way to tell the real meaning of Christmas. I was honored to be a part of it.”

Apart from some intense moments of perilous pursuit that might be frightening to very young or sensitive viewers, the film’s only other content issues all have to do with occasional bathroom humor—usually courtesy of Dave the dove.

But those moments are only very mild concerns in a film that’s otherwise admirably focused on retelling the familiar story of our Savior’s birth from a fresh perspective.