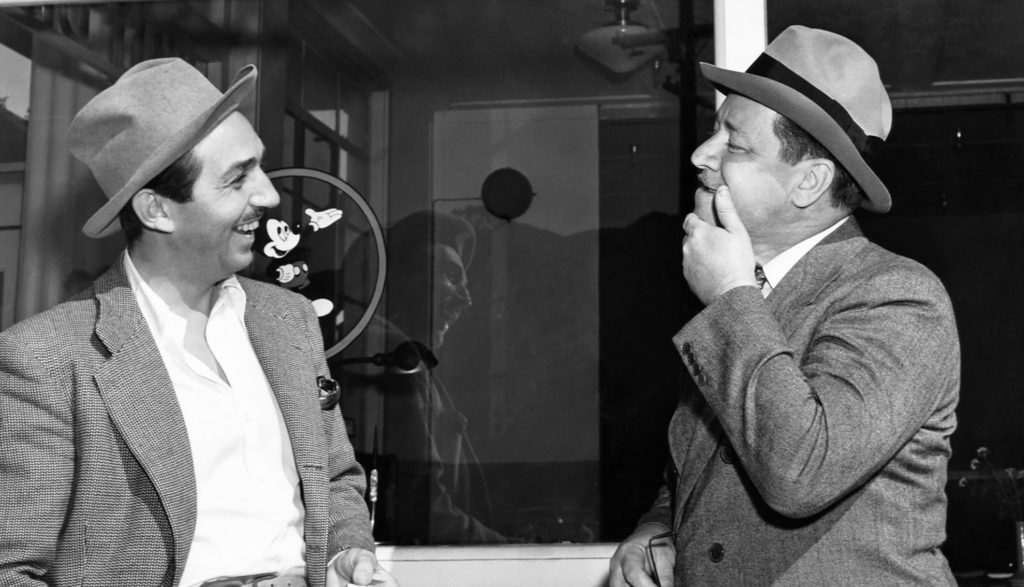 As Robert Benchley lounges on a pool float, playfully shooting rubber darts at plastic ducks floating in the water, his wife finishes off reading a story book about The Reluctant Dragon. It’s a book that belongs to their nephew, but they both agree it’s a lovely story.

“Why don’t you sell it to Disney?” Mrs. Benchley suggests to her semi-famous, comic-actor husband.

“I hardly know the man,” he retorts before going back to his duck dinking.

Before you know it, the two are caught up in a husband-and-wife tug-of-war that culminates in Robert Benchley declaring, “I refuse to look ridiculous!” That exclamation comes just before falling in the pool and looking, well, ridiculous.

The next morning, the two show up at the Disney Studio gates, and Mr. Benchley reluctantly strolls in with a pass in one hand and a kid’s book in the other.

He’s going to talk to Walt Disney about a great little movie idea. But first … he might just poke around a bit. And you never know what kind of trouble an overgrown kid like him might get into in an imagination-filled place like this one.

Indeed, Benchley does poke around a lot. And the Disney dream factory is depicted as a place filled with nice, smiling people who joyfully share their creativity with others. It’s obviously, uh, less than realistic. But Disney Studios does feel like a pleasant place to be, and being happy and smiling seems a pleasant way to be.

When Benchley stumbles into an art studio, he thinks he might catch a glimpse of a female model that just walked in. But the artists are really sketching a female elephant (including early sketches from Dumbo).

We do, however, catch glimpses of small, abstract pencil drawings of some apparently nude female figures taped to a back wall.

Later, Benchley notices a table full of small figurines called maquettes used by artists as a 3D resource for animated characters. He picks up one that is a centaur-like figure from a sequence in Fantasia. The maquette is a zebra with a female torso that’s topless, but undefined.

We see some light slapstick cartoon action as a dragon and an old knight stage a mock battle. Robert Benchley gets lightly thumped about sometimes, too, as he stumbles over things and falls to the floor.

A cartoon kid is called “stupid.” Someone says “goshdarnedist.” An old knight calls someone a “bit of a rotter.” And Benchley comically calls out, “Ah, fooey!”

Some artists are seen puffing cigarettes. A nervous father in a cartoon drawing is depicted with stubbed out cigarette butts scattered around him on the floor.

After Benchley tells his wife that he doesn’t know Disney well, his wife retorts, “You hardly knew me when you suggested marriage.” To which Benchley mumbles, “Yeah, and look at the trouble …” before changing the subject.

A cartoon nurse sprinkles powder on a cartoon baby’s bare backside. Some cartoon figures representing different races around the world are broadly stereotypical and could be seen as lightly offensive by contemporary standards.

So, what exactly is Disney’s The Reluctant Dragon? Is it a documentary? A cartoon? A live-action film mixed with cartoons? What? Well, the answer is … yes. In fact, it’s a makeshift blend of all of the above.

In 1937, Walt Disney and crew created Snow White and the Seven Dwarfs, an extremely successful animated film. And then the burgeoning animation studio leaped into two hugely ambitious projects: Pinocchio and Fantasia. Those pics are thought of as groundbreaking classics now, but both were relative box-office bombs at time—the former puppet-boy pic thought to be too dark for kids and the latter classical music hybrid that was considered way too avant-garde.

Walt decided his company needed something it could put together quickly and on the cheap to bring in some much-needed box-office income. So why not give the family audience a peek behind the curtain of the Disney dream factory? Thus The Reluctant Dragon was born.

Humorist and sad-sack comic actor Robert Benchley reluctantly stumbles through the actual Disney studios in staged scenes that lend this “documentary” a veneer of the comic filmmaking of the day.

Along the way, the film gives us a behind-the-scenes, piece-by-piece look at how big animation projects were created in 1941: the sketches, the foley work, the comic voice-overs, the storyboards, the hand-painted art cells—all the while offering glimpses of films such as Bambi and Dumbo that were still in stages of early production at the time. And on top of that, we also see everything we’ve learned about animation production tossed up on the screen in a short film about a poetry-loving dragon who refuses to fight.

The Reluctant Dragon is rated G. But there are a handful of potentially uncomfortable moments parents should know about in the form of some cartoon stereotypes, a semi-nude female centaur figurine and artists puffing away at their cigarettes as they draw. Those fleeting moments feel out of kilter with our modern sensibilities today.

But this little flick is still quietly significant in its own way: It is a time capsule. This overlooked and forgotten Disney marketing effort from 1941 gives us a silly, sanitized, but still very accurate peek into a world that no longer exists. It’s a study of behind-the-scenes creativity that no one else ever actually captured on film, save this story.

And for the right kid and thoughtful mom or dad, The Reluctant Dragon offers a rare, first-hand portrait at animation history.