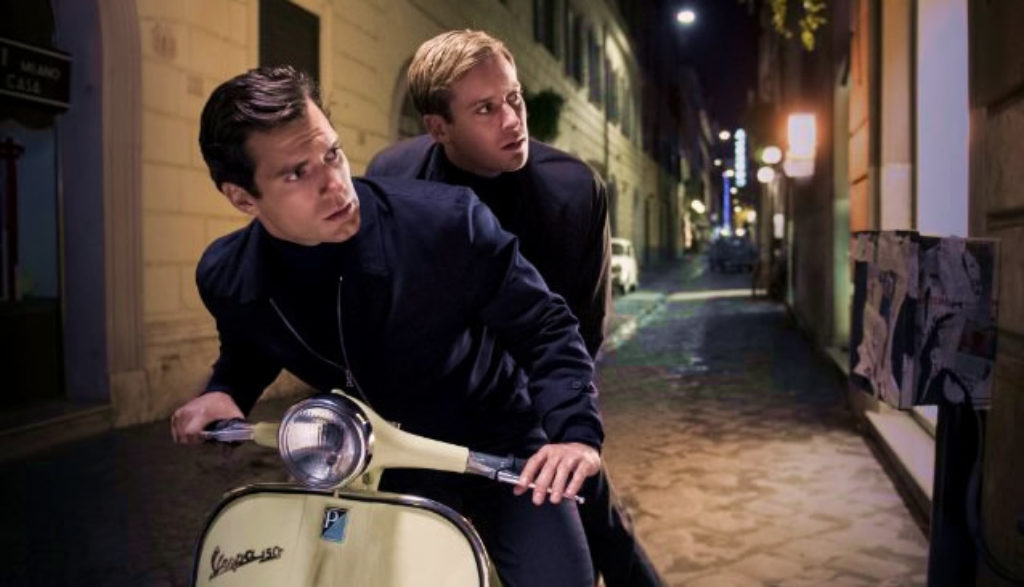 Nikita Khrushchev is pounding podiums with his shoe. John F. Kennedy is tossing around the Nuclear Football. The Soviet Union gobbles up countries like moon pies, and Americans dig fallout shelters in their backyards right next to the grill. This isn’t just a slightly chilly section of the Cold War: This is a let’s-live-in-a-Frigidaire-on-Pluto-and-bring-along-some-dry-ice-while-we’re-at-it Cold War. If the United States and Russia were suburban neighbors, you’d bet there would’ve been plenty of toilet paper in the trees and rotten eggs splattered on doorsteps.

Napoleon Solo and Illya Kuryakin would be prime international TP’ers if they had their way. Napoleon, CIA agent extraordinaire, is everything Mother Russia thinks it hates about America: He’s gratingly handsome, disturbingly corrupt and unabashedly materialistic. And it would surprise few 1960s-era Americans that KGB operative Illya is a borderline psychotic (spychotic?) with a love of chess and some serious father issues. Sure, the two spooks share a mutual respect. They’ve even run into each other a time or two. Literally. But they get along about as well as Kanye West and Taylor Swift at an MTV sleepover.

Or they would if it wasn’t for the Nazis.

If there’s anything Americans hate worse than Communists in 1961, it’s Nazis. Give a Nazi a fork, they figure, and he’ll threaten the U.N. General Secretary with its bristling tines. Give a Nazi a throw pillow, and he’ll proceed to pummel the nearest third-world country with it.

Now, it seems, a strange splinter group with Nazi-like tendencies is trying to build a nuclear bomb, using the expertise of a captured German scientist to do so.

As much as America and the Soviet Union may hate each other, they’d sure like to still have a world in which to hate. So their respective governments formally introduce Illya and Napoleon, and give them an unprecedented joint mission: With the help of the scientist’s beautiful daughter, find the bomb and put an end to this Nazi mischief.

Yes, it seems, the Cold War’s chilliest combatants have decided, if just temporarily, that it’s time to bury the hatchet. Let’s just hope Napoleon and Illya don’t try to bury it in each other.

You can’t take too much issue with gentlemen trying to save the world from nuclear destruction, can you? The fact that these two guys are so different, I suppose, makes their partnership all the more inspiring. Sure, they may have different philosophies, different outlooks and wildly different tailors. But they still find enough commonality to do the job as it needs to be done—and indeed, discover a wellspring of friendship while they’re at it.

Illya also develops a certain affection for the scientist’s daughter, Gaby. They’re aided in this by their cover story—that he’s a Russian architect and she’s his fiancée. But given the lengths to which Illya goes saving the woman illustrates that she’s more important to him than just a job.

Napoleon’s last name may be Solo, but that doesn’t mean he spends many evenings alone. He’s a chronic womanizer, and it’s suggested he has two intimate encounters here. One is with a hotel employee who walks around his room in nothing but lacy, diaphanous panties. (We see her from the rear and side.) The other is the prime villain, with whom he shares a session of moaning and panting and floor shaking. (We hear them from the room below.)

Illya and Gaby, who is drunk at the time, lovingly “wrestle” and intertwine before she passes out. Later we observe Illya reaching under Gaby’s dress to adjust a listening device that she has strapped to her upper thigh. There’s talk of prostitution and being “easy.” Cads flirt with the supposedly engaged Gaby. Women wear sultry outfits.

An old Nazi doctor referred to as “the fifth horseman, doctor of the Apocalypse” earned lasting fame as a practitioner of torture, and he clearly loves his work. He brags about it and shows off pictures of his victims. Others say he enjoys working slowly. Blood trickles from a man’s nose after the doctor straps him to a chair that blasts electricity through him.

Eventually the tables turn. The doctor is strapped into his own device and electrocuted. While his death was not intentional, neither Napoleon nor Illya seem particularly broken up about it.

Several people are shot and killed here. One is executed at close range. (We see the body on the floor.) Others are taken down via sniper. A man is stabbed to death, and blood flows from his mouth. Illya performs what he calls “The Kiss” on a guard—rendering him unconscious while leaving him standing. Fights break out, sometimes with policemen. Someone threatens to kill every living relative Napoleon has. Someone nearly drowns. Illya chokes Napoleon. The two fight in a men’s bathroom, crashing through stall walls.

A bomb explodes on a ship. A truck plunges into the water. Cars crash and are ripped up. We see footage from World War II, as well as from Cold War conflicts.

As mentioned, Gaby gets drunk. When Illya snidely asks if he should get her a bigger glass for her whiskey, she says she plans to finish the bottle that evening: The only question is whether Illya will help her. (He won’t.) Napoleon drinks Scotch laced with a sedative. Others are shown imbibing wine, champagne and hard liquor. One woman says she’s been on a champagne and caviar diet for three weeks. People smoke. A dossier reveals that someone was a “former alcohol and opium addict.”

We see Napoleon’s boss relieve himself at a urinal (from the back). Illya threatens to put Gaby over his knee.

A former jewel and art thief, Napoleon uses his light fingers at a fancy shindig. And it’s stated that he’s supplementing his income through not strictly legal means. His dossier says he’s a gambler.

Director Guy Ritchie is known for his visual panache, and The Man From U.N.C.L.E.—based on the 1960s television series—is all about image and fashion and music and how the thing feels. But while it’s strong on style, it shirks story.

It’s hard not to compare The Man From U.N.C.L.E. with Mission: Impossible – Rogue Nation, which arrived in theaters just a few weeks ahead of it. Both have a clear appreciation for early James Bond flicks and the tense, groovy 1960s. And both are, within their genre at least, relatively restrained when it comes to outright objectionable content. Foul language, violent conflict and needless sensuality are present, to be sure. Still, it’s rare to see a PG-13 action movie that tallies fewer curse words than you can count on a hand or two.

But whereas Ethan Hunt and his fellows in Mission Impossible feel like real people who thus engage in real heroism (a few high-flying stunts excepted), Ritchie’s U.N.C.L.E. feels about as real as a music video. Its prime characters are not so much good or righteous or even likeable as they are cool and smooth and beautiful—moving tableaus less concerned with saving the world than they are what they look like while doing it.

I said earlier that it’s hard to take issue with folks trying to save the world. And yet this film doesn’t feel particularly heroic. It feels strangely cynical, and its pseudo aversion to cursing—while welcome—can’t completely ameliorate the moral hole at its core.