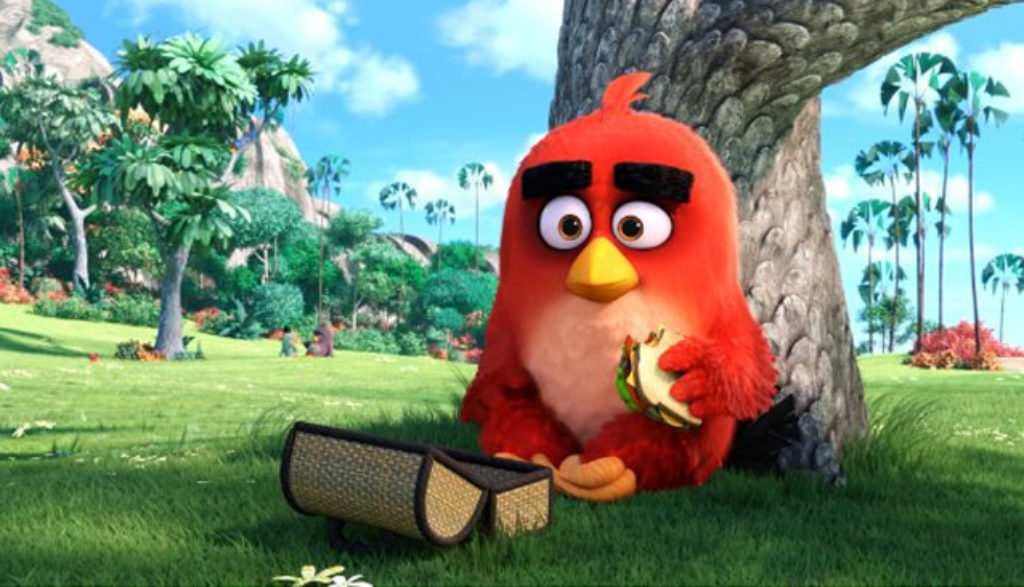 It’s not that Red is a bad bird. He’s just an intensely irritated one. And in a sunny world full of happy hooters and cheery chicks, that makes him stand out like a sore pinfeather.

Red has tried to do the right thing, but all his life there’s always been somebody pecking at him in one way or another. And there came a time when he just couldn’t turn the other wing anymore.

He blew up. Big time.

That landed him in therapy alongside a bunch of other rotten eggs. There he flapped and fluttered with the manic and seemingly over-caffeinated Chuck, the explosively dimwitted Bomb and the grunting bruiser Terence. It was a whole nest full of problem cuckoos just like him.

The truth is, though, Red saw the world around him much more clearly than all the “normal” songbirds gave him credit for. And that was definitely proven out when the pigs sailed into port.

Those party-focused porkers seemed really fun when they first landed, their ship full of bright lights, fireworks and party supplies. But Red sensed right away that something didn’t smell right. (And that’s not just pig-prejudice talking, either.) Maybe it was his years of realizing the worst in people, but when Red first laid eyes on those over-the-top oinkers, he knew they were up to no good. Still, no matter how he cawed out a warning, no one would listen.

Now, though, the sloppy truth has come home to roost. Those horrible hogs stole away all of the unhatched eggs in town and sailed off to some distant isle. And the whole bird community is squawking in fear.

Red knows that there’s really only one thing to do: gather his furious fellows and unleash some serious suffering on those scurrilous swine. It’s time to replace bird-brained panic with something a whole lot more angry—and launch headfirst into this problem.

Red and the other angry birds do bravely save some eggs that the pigs plan on gobbling. And once they get back home we see how the eggs hatch into scores of cute little chicks (reminding us that every life is valuable). The bird community responds by welcoming the ostracized Red back into town after his heroic turn.

A counselor uses the spiritually minded word namaste. A bird makes a quip about “cardinal sin.”

After the town’s eggs are stolen, Chuck suggests that they should replace them—while thrusting his hips and saying, “Ladies, get busy!” There are several other similar sexual innuendo quips in the mix. And then there’s this: A pair of toilet bowl plungers are used as a bikini top, of sorts, for a partying pig. Celebrating pigs slap backsides. Chuck imagines a hero called the Great Eagle as a male stripper, the camera swooping in on his flexing backside. The Great Eagle uses binoculars to spy on an older woman taking a mud bath.

The pigs repeatedly talk about wanting to make omelets and other egg delicacies out of the stolen eggs. (It’s a “travesty” made all the more uncomfortable by the anthropomorphized nature of the birds and their cute little hatchlings.)

There’s also quite a bit of cartoony slapstick humor throughout this pic. Red is bashed and pummeled from beginning to end. And other birds are battered as well. The birds also use their ability to take a thump by hurtling themselves via slingshot into and through the pig’s buildings. The pigs return the favor by throwing dynamite. In the end, the pig city is decimated by an enormous explosion and the bird town is pretty much burned to the ground.

Otherwise innocent words such as “flock” and “pluck” are substituted for some pretty severe swears. At least twice, the phrase “son of a …” is left just unfinished. The same goes for “What the …?” “Fart face” is written on a pig’s stomach. We hear “butt,” “dummy” and “heck.” A running joke features repeated uses of “oh my god!” as its laugh line.

Toilet humor gags are tossed about willy-nilly. For example, a character urinates (as part of his morning routine) into lake water that others gargle with. Somebody shoots fireballs out of her backside. And a mother bird regurgitates for her children’s lunch sacks. Red cries out about his aching “giblets” when hit in the crotch.

The things of life can make you angry. So you should use that anger to … get revenge!

That’s the lesson Angry Birds has in its cinematic beak. And it’s a fairly motley one, if you ask me. Especially when you’re handing it out to kids who already have a natural tendency of wanting to thump anybody who swipes a toy or two on the playground. But what more were we expecting from a cartoon based on a phone app that shoots miffed birds at pigs?

Sure, this chuck-a-chick kids’ pic is colorful, and it launches some cute characters at the screen. And some folks will be able to see some sort of anti-bullying statement in it if they squint their eyes and take just the right aim.

But, well, I tend to get a bit grumpy about “kiddie” movies that feature cartoon characters using adult-word puns as their main source of giggles—such as this pic’s use of a fierce call-out for some “angry flocking birds,” or the discouraged sigh, “Pluck my life!”

Can’t I at least cry fowl over that?