Teen Titans Go! To The Movies 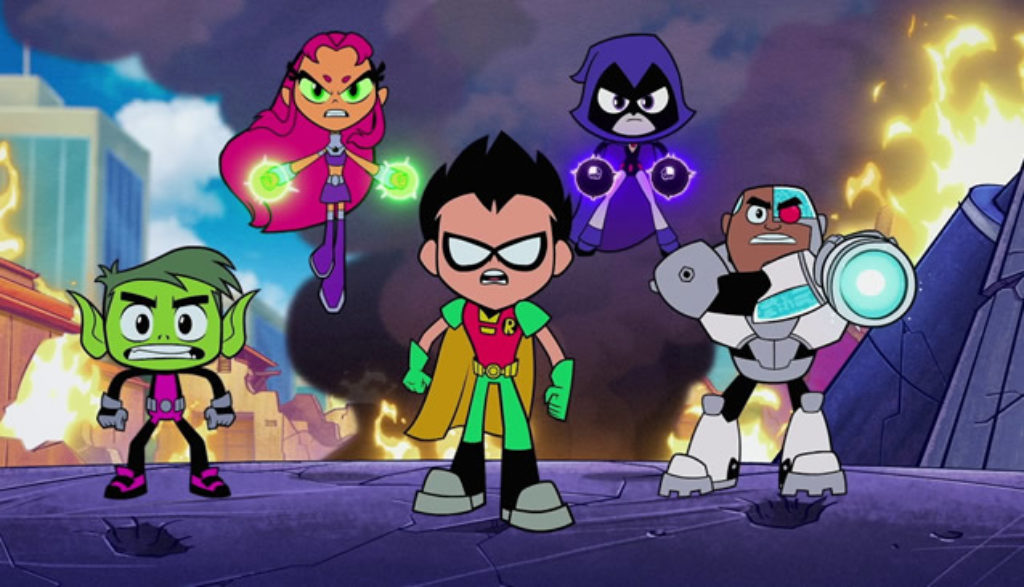 It sometimes seems as if they’re making movies about every hero that ever got his or her name on the cover of a comic book. At least, that’s how Robin feels. Why, even the most obscure good guys seem to walking the red carpet these days. They’re making a movie featuring Batman’s butler, Alfred, fer crying out loud. And Batman’s car. Even Batman’s utility belt will see its name in lights. And it can’t even read!

But Robin, Batman’s sidekick, the teen in red and green, the Boy Wonder, does he get his own movie? Nope. He can’t even get a commercial selling bird seed. It’s flat-out embarrassing, if you ask him.

I mean, hey, he is the leader of the Teen Titans, a heroic team of adolescent do-gooders in colorful outfits that includes Raven, a mystic magic-caster; Cyborg, who’s part man, part machine; Beast Boy, the shapeshifter who can take on any animal form; and Starfire, the princess from another galaxy who can harness the power of the sun. Surely you’d think his association with them would have gotten somebody’s attention.

Even among their fellow superheroes, Robin and his teen teammates are seen as nothing but a joke. Of course, part of that might be due to the fact that they all have a youthful and irreverent sense of humor. But, hey, they’re teenagers. What do you expect?

At least they’re not as dry and boring as all the older fuddy-duddies flying around out there. Everybody knows a good whoopee-cushion gag can make bad-guy battle just a little more fun. And a few quick quips at said baddie’s expense can save the day with a wink and a smile. I mean nobody treats the Joker like any lesser of a nemesis because …

The reason the Teen Titans have gotten no respect is because they don’t have their own nemesis! Batman has the Joker. Superman has Lex Luther. Green Lantern has, uh, you know, that yellow guy with a ring. If the Titans got a nemesis, everyone would take notice.

Why not make that fellow who’s always stealing things from Star Laboratories their arch-baddy, you know, uh … what’s his name? Slade, that’s the guy. He’s got an evil-looking costume (that looks a lot like that inappropriate Deadpool guy). And his name even sounds really evil when you say it and growl in your throat just right: Slaaayduh! Yeah, that’s bad.

Foil that guy at whatever dastardly junk he’s planning, and say his name a few times in really evil sounding ways—Slaaaayeed—and Hollywood will surely come knocking on Robin’s …er, that is, the Teen Titans’ door.

Robin is so caught up in the idea of making a movie and becoming famous that he makes some bad choices, turning his back on his friends in the process. In fact, even older heroes are duped by the powerful lure of being famous. Ultimately though, the film presses home the point that the benefits of friendship and loyalty are far superior to anything that fame can offer. It’s a lesson parents can easily connect to a young person’s desire for popularity at school or the false promises of instant online fame.

The Teen Titans, for their part, make some selfless choices and rally together when the chips are down. The older supers recognize their effort and express thanks for the heroic things that the youngsters have done.

Raven is said to command dark magic. She uses the chant “Azerath Metreon Zinthos” to make something appear at one point. She also opens a portal on several occasions that sucks the Titans and others into a dark nether zone of sorts. However, her object-levitating and portal-opening powers are never fully explained or even addressed by the other characters. (Fans of her comic, however, may be aware of her human-demon origin as depicted there.)

[Spoiler Warning] The Titans travel back in time to correct “tragic events” that happened in some people’s past lives. They find, however, that stopping those events actually changes the present for the worst—unleashing terribly destructive things—and creating some new problems for them to solve.

By movie’s close, Robin is worried that there isn’t enough of a takeaway message for kids in the audience, and he sarcastically blurts out, “Ask your parents where babies come from!”

It’s not really sexual in nature, but various characters—including Robin and a baby version of Superman—dance and shake their backsides at the camera during some group song-and-dance numbers. A director captures a 3D version of Robin’s booty-shake for a movie she’s making.

There is quite a bit of thumping cartoon violence as these heroes battle with baddies. We see a city being set ablaze by villains at one point, as well as several smash-bang struggles that send good guys and bad guys alike flying. That said, there’s nothing deadly or really scary about any of it.

In fact, there are only two onscreen moments that stand out as memorably surprising with regard to violent content. One features a baby Aquaman, who gets tangled up in a plastic six-pack ring and sinks to the ocean floor. The other showcases the Titans beating up on a representation of a real-world actor. But both of these scenes are played for laughs.

Potty humor is sprinkled pretty liberally throughout this pic, including gags about passing gas, a character’s comment about someone’s “explosive diarrhea” and a running joke about the Teen Titans using a prop toilet to relieve themselves (off camera).

What makes the Deadpool franchise so appealing for its adult fans? A big part of it is the way that spandex-clad series and its mad-mouthed “hero” skewers the universe of Marvel supers with a blithe, caustic, self-aware humor.

In a way, Teen Titans Go! To The Movies is a pic that slips into a broadly similar, meta-humored cowl and cape for the DC Universe. Only this movie is mostly light and fun. And it leaves all the bloody, profane, R-rated nasty stuff for Marvel devotees to deal with, while taking a kid-focused aim at Cartoon Network fans and their family members instead.

This rollicking super-spoof adventure is packed to the brim with Easter eggs and chuckle-worthy mega-winks at everything DC-related. It takes a few gleeful swipes at the film industry in general. Most importantly, it leaves kids with a clear S-on-your-chest message that declares that something as ephemeral as fame is nowhere near as important as friendship, teamwork and being a person of good character.

That’s not to say that this pic is just one big happy fun factory. It has enough toilet humor, shake-yer-booty jokes and gas gags to make even a fourth grader cry uncle. (I know, ’cause I had one with me.)

But there’s a lot of enjoyable stuff here, too, fun for kids of almost all ages. Families who choose to cope with its inane gags will find a flick that delivers some solid messages about what matters most in life.