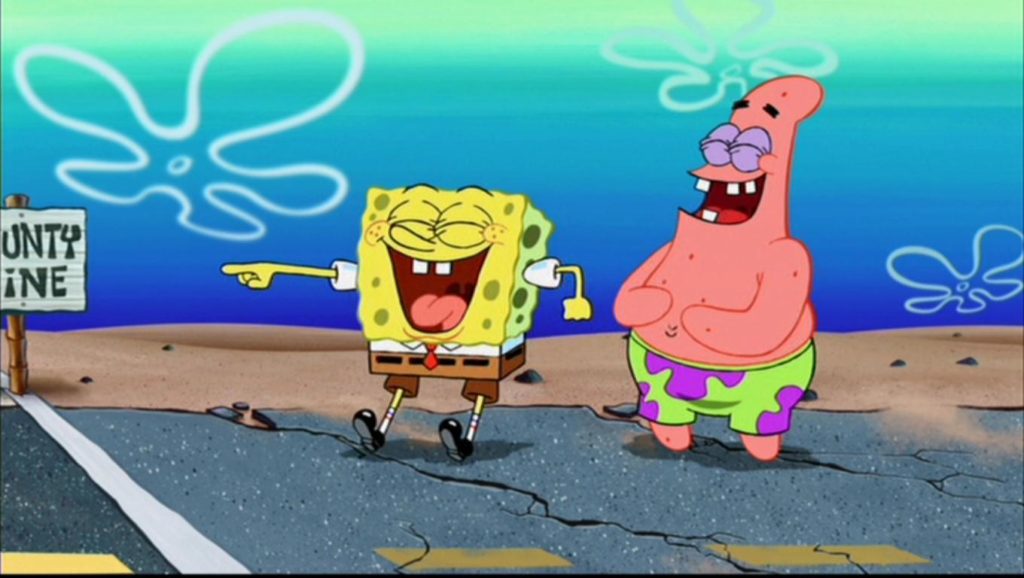 After a five-year run of small-screen success on Nickelodeon, SpongeBob SquarePants makes his way from the bottom of the sea to the middle of the big screen. So how do you keep a theater full of kids (and adults) fidget-free when they’re used to 10-minute cartoons? You raise the stakes.

SpongeBob SquarePants is, well, a sea sponge … who wears square pants. The walking yellow rectangle is infectiously optimistic and carefree, especially when hanging around his starfish of a best friend, Patrick. But when SpongeBob isn’t chosen to be manager of the newest Krusty Krab hamburger joint after years of dedicated service as a fry cook, he’s crushed.

Meanwhile, the miniscule but sinister Plankton is up to his old tricks again, trying to steal the secret formula for those delectable Krabby patties (and, oh yeah, rule the underworld). His plan seems to be working when SpongeBob’s boss, Mr. Krabs, is framed for stealing King Neptune’s crown. With the hamburger maestro facing certain grilling via Neptune’s flaming scepter (and every sea creature in the land of Bikini Bottom about to be put under Plankton’s mind control), our Spongy hero offers to retrieve the crown and save Mr. Krabs’ life. To do so, he and Patrick must venture to Shell City, a faraway town from which (turn up the sinister reverb to read this) no one has ever returned!

Despite Mr. Krabs’ decision to not promote him, SpongeBob is willing to risk his life to save the hamburger mogul. King Neptune’s daughter, Princess Mindy, continually urges her heavy-handed father to show his subjects compassion. She intervenes to spare the life of a servant unduly sentenced, begs Neptune not to terminate Krabs and encourages SpongeBob and Patrick while they’re on their dangerous mission. Ultimately, her empathy for the underwater citizens is acknowledged by King Neptune, who apologizes for his harsh ways.

“You are who you are” is heard throughout the movie, emphasizing to kids the lesson of self-acceptance and self-respect. Entire scenes (and songs) are dedicated to proving that no matter how old you are, you can make a difference. Mindy tells SpongeBob, “It doesn’t matter if you’re a kid. … You’ve just gotta believe in yourself.”

Referring to their “Goofy Goober” obsession, SpongeBob mentions to Patrick that they “worship a dancing peanut.” Mindy tells the pair that her “mermaid magic” will transform them from boys to men. Trapped in a fish bowl, Patrick calls the glass a “wall of psychic energy.” In one scene SpongeBob is called a “wizard” and dresses (and shoots lightning bolts) accordingly.

When Plankton opens his “Evil Plan Z” folder, he gawks and pants as if ogling a centerfold model. Patrick drools all over the midriff-baring Mindy, exclaiming, “She’s hot.” Caught with his pants down, he asks her, “Did you see my underwear?” She says she didn’t, to which he responds, “Do you want to?”

SpongeBob and Patrick frequently run around in their skivvies. And it’s obvious the movie’s directors intended to draw as many kiddie laughs as possible from bare bottoms. SpongeBob, Patrick, Mr. Krabs and an octopus named Squidward all moon audiences at some point. The running gag (that kids seem to get) is, what’s there to see?

It’s at this point that things go from wiggle-giggle to worse. One of the times Patrick’s bareness is beheld, he has a pole wedged between his, ahem, cheeks … a pole with a flag labeled “SpongeBob.” (Patrick asks SpongeBob, “Did you see my butt?) Plankton gives a (male) TV reporter an adoring “look” when he asks for an interview, then coquettishly replies, “Anything for you.” SpongeBob creeps into Squidward’s shower and begins scrubbing his back for him. And Patrick prances about wearing women’s high-heeled boots and stockings.

The SpongeBob SquarePants Movie doesn’t just allude to the building mystery surrounding its characters’ sexuality (see the “Conclusion” for more on this), it repeatedly plays with it. It revels in adult-minded asides that fly right over kids’ heads and straight into the disbelieving stares of parents.

“Is it just me, or do SpongeBob and Patrick act even more immature and effeminate than ever before?” asks Christianity Today movie critic Russ Breimeier. “I had to shake my head in disbelief at the site of Patrick in thigh-high leather boots and fishnet stockings—I squid you not. Do not take your kids to this if you felt that Shrek 2 was inappropriate.” Lawrence Toppman, in the Charlotte Observer, noted the peculiarities by quipping, “It took some guts to make Bob and Pat so apparently gay.”

The SpongeBob SquarePants Movie is filled with the slapstick-style physical violence so typical of most kid-targeting cartoons. SpongeBob slaps a fish in a mock interrogation scene. King Neptune hits his squire over the head every time he says something wrong. The underworld king also sets Mr. Krabs’ pants on fire and freezes him into a block of ice. A pursuing hit man gets walloped on the head by an approaching boat. Patrick crashes into a stage-area, setting it on fire.

But be prepared for other forms of violence, too. Dennis, an assassin hired to take out SpongeBob and Patrick, rips off the mouths of mocking gas station attendants. In a bar full of thugs, brawling seems more popular than drinking. The head thug threatens that anybody who blows a bubble will be “beaten senseless”; a pair of conjoined twins soon fall victim. Twice, Plankton gets stepped on (and smeared), and we hear his harrowing screams.

Piles of skulls and bones mark the dangerous way to Shell City. SpongeBob almost gets eaten by a deep-sea “monster” fish. Twice, Dennis tires to crush our fearless friends with his spiked boots. He, in turn, gets stepped on by a deep-sea diver, who captures SpongeBob and Patrick, and attempts to kill them by drying them out under a heat lamp. Live-action sequences feature a man getting smacked in the face with a door, and a pirate pulling a sword and using it to threaten a movie theater employee.

Lots of name-calling (“jerk,” “twit,” “stupid,” “dork,” “ding-a-ling,” “knucklehead,” “dipstick,” “McSpazatron”). “Freakin'” makes an appearance, and the phrase “What the …?” is (twice) left incomplete. Another time it’s finished with the word scallop. God’s name is interjected a couple of times. And at one point it sounds like someone says “jacka–.”

SpongeBob drowns his sorrows at a “Nut Bar” with Patrick at his side by indulging in multiple ice cream sundaes. Though alcohol is never mentioned, both act drunk, staggering around with bloodshot eyes and slurred speech after “drinking” until 8 o’clock in the morning. At a roadhouse, patrons drink heavily.

Mr. Krabs stays true to character by caring about nothing but money. He tries to scam King Neptune by raising his store’s prices upon his visit. Mindy steals a “bag of wind” from her father, and at various times defies his often-unreasonable orders. Plankton, meanwhile, revels in his evil ways, stealing the Krabby patty secret formula, lying to a reporter about his thievery and trying to have SpongeBob, Patrick and Mr. Krabs killed.

Instead of SpongeBob’s heroism saving the day in the end, the story takes a bit of a strange turn, crediting the power of rock ‘n’ roll with releasing the town from Plankton’s mind-control helmets. So the “automatons” find themselves finally able to think for themselves again only after being blessed by the magic of three chords and some drums.

Gross, body-humor scenes include loud belching, visible flatulence (don’t ask) and a gushing flow of saliva that Patrick and SpongeBob spew back and forth from mouth to mouth.

Everybody loves SpongeBob SquarePants. Though the show’s target audience is children ages 2 to 11, its widespread success among all generations is something of a cultural phenomenon. Nielsen Media Research’s TV ratings indicate that 22 percent of its audience falls in the 18 to 49 age range. (Some reports have that figure as high as 30 percent, and the BBC claims that in Britain a whopping 40 percent of viewers are adults.) Nickelodeon broadcasts of the show regularly make up 40 of the top 100 shows seen on cable. (The Chicago Sun-Times reports that there are “60 million fans of the Nick series.”) And it’s become a $1.5 billion annual licensing icon.

SpongeBob is cartoonish enough for youngsters to like it. Off-beat enough for teens to still think it’s cool (a group of tough-guy high schoolers sat a few rows in front of me). And funny enough for lots of adults to enjoy.

I’m one of those adult fans. I’ve loved the sheer goofiness, buoyancy and straightforwardness of this walking, talking sponge. So when a buzz began a couple of years ago about SpongeBob being gay, I shook it off as yet another sign of his not-so-innocent times. First Bert and Ernie, then a Teletubby, now a sea sponge? I was content to hear SpongeBob’s creator, Stephen Hillenburg, vow that his animated star was not homosexually inclined. Sure, he acknowledged the gay community’s affinity for the show that periodically features SpongeBob and his best friend holding hands. But his explanation seemed to hold water. “The attitude of the show is about tolerance,” he pointed out. “Everybody is different, and the show embraces that. The character SpongeBob is an oddball. He’s kind of weird, but he’s kind of special.”

Case closed, right? Believe me, I wish it were that easy.

Not that nods to sexual uncertainty are the only trouble spots for parents to consider before allowing little ones to cozy up to Bikini Bottom. For kids, The SpongeBob SquarePants Movie presents a level of cartoon violence that, while now all-too routine, is still influential, and needs to be addressed if your family sees this flick. Will your child laugh as Plankton shrieks in pain when he’s repeatedly squashed? The answer is telling, and should guide what kind of conversation happens afterwards.

SpongeBob isn’t so severe that it can be callously lumped in with all those slimy “adult animations” seen on Comedy Central. But it does borrow some of their ideals. Writing for about.com, Fred Topel described SpongeBob as having a “South Park sensibility in a package that’s appropriate for kids.” Just how appropriate it is will have to be determined by millions of moms and dads as SpongeKids everywhere begin begging to see their bright yellow hero.