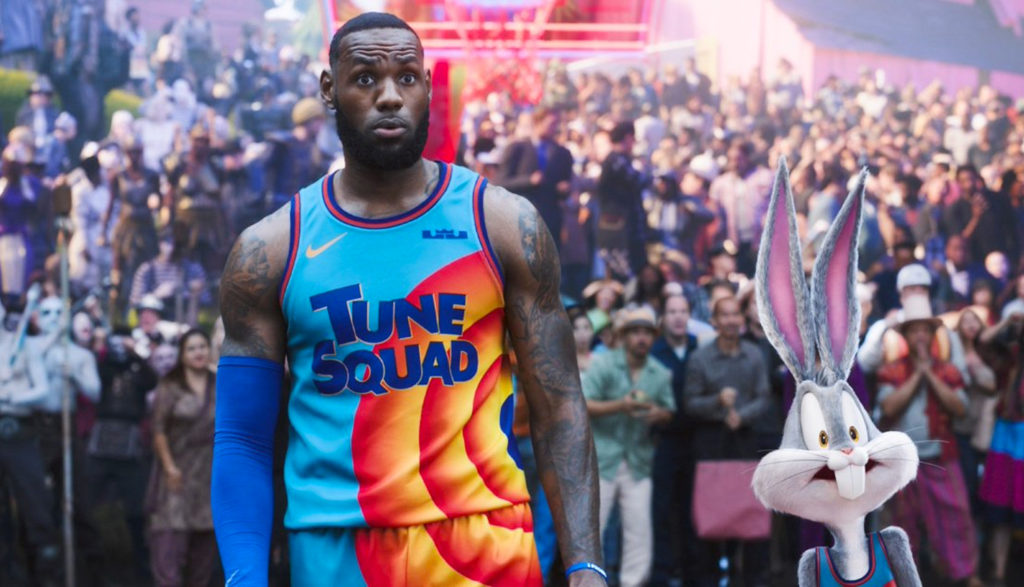 “You want me, a cartoon bunny, to team up with you, an NBA superstar in a high stakes basketball game?” Bugs Bunny asks.

If that sounds familiar, you’re not the only one feeling that way.

Bugs, Daffy Duck, Lola Bunny and the entire Looney Tunes gang are back once again to dribble, jump, shoot and score! Only this time, the Tune Squad is teaming up with Los Angeles Laker LeBron James instead of Michael Jordan.

Al G. toils away thanklessly deep in the heart of Warner Bros. Studios vast array of computer servers. Now, instead of anonymity in the Warner Bros. Server-verse, Al G. just wants one thing: to be recognized for his hard work and dedication. And he has the perfect plan: Convince LeBron James to let Warner Bros. scan his image into movies as an actor to maximize LeBron’s fame and make a fortune for the legendary studio. Then the company will finally realize just how brilliant Al G. is.

Only problem is, LeBron doesn’t want to do it. “Athletes acting never goes well,” he says, with a meta-wink to the audience.

Al G. is crushed. So then, on to Plan B: Kidnap LeBron’s son, Dom, then challenge LeBron to a basketball game in the Server-verse. If LeBron wins, he and Dom can return home. But if Al G. wins, they’ll be stuck in the computer-digitized world forever.

LeBron’s only chance of winning is to team up with the Looney Tunes. But first, he’ll have to travel across the Warner Bros. Server-verse to find them all.

Growing up, LeBron learned that if he wanted to make something of himself, raw talent wouldn’t be enough. He needed to work hard in every game and every practice to achieve his dreams. And adversity is a part of that process, but if you’re truly passionate, you learn from it and push through. And as an adult, he instills that value of hard work in his kids.

He also tries to instill his love of basketball in them, albeit with mixed results. Elder son Darius loves the game just as much as his dad and practices daily on the court. But younger son Dom is more interested in video games—he even builds a game at 12 years old. This creates a rift between father and son as LeBron wants Dom to focus on basketball, but Dom just wants to be himself.

With some help from the Looney Tunes, LeBron realizes that as a parent, there’s a balance between our desires for our kids and learning to let them be who they are instead of trying to control them. As a dad, LeBron doesn’t need to be Dom’s basketball coach. He simply needs to love his son and support Dom in all his endeavors. The resulting message to fathers here is an inspiring and challenging one.

Bugs tells LeBron that Al G. convinced the other Looney Tunes to leave Tune World in order to explore the rest of the Warner Bros. Server-verse. This makes him sad, since literally every other cartoon left, never to return. However, the basketball game brings everyone back together again, reminding him that it didn’t matter if they wanted to try new things—what mattered was that they came home when he needed them.

Characters show a willingness to sacrifice themselves for those they love—and one character is willing to give up his life for his friends in a surprisingly poignant scene. Another character risks losing her dream in order to save her friends (which pays off, since she is rewarded for her valiant efforts).

We also see a flashback to LeBron’s childhood, and we see that his mom has to miss a basketball game because she’s working hard to support their family. LeBron is sad, but he also understands the sacrifice she’s making. He works hard so he can repay her efforts someday.

Someone utters “thank God.” When a man is pulled into the Server-verse, he fears that he has died and asks if this is what heaven looks like. Someone says Bugs needs a rabbit’s foot for luck. A character says the Tune Squad needs a miracle. People call LeBron the “Chosen One.”

Throughout the film, there are passing visual references to other Warner Bros. franchises that feature different kinds of fantastical and magical storylines, including The Wizard of Oz, Harry Potter, The Matrix and Game of Thrones, among the most obvious ones.

We see a shirtless man exercising; a couple of other shirtless guys can be seen in the crowd watching the game. We see Wonder Woman in her typical off-shoulder costume. Lola Bunny wears a cropped shirt in one scene. Bugs is shown in a bathtub. Foghorn Leghorn dresses up as a female character once. A cartoon character’s fur is pulled from his lower end, revealing his underwear. Someone asks about the size of some rear ends. A female character blows a kiss at someone.

The film takes place primarily in the Server-verse, which is a computerized cross between “Tune World” and the human world. Here, characters (human and cartoon alike) are shot, smashed, blown up, squished, dropped, kicked and punched without suffering any real injury. (Even when characters do appear hurt and say, “Ow,” their bruises are healed by the next scene. And Bugs points out that as a cartoon, he can’t die.) One character does appear to be on the verge of dying at one point, but later returns no worse for wear.

LeBron attempts to tackle Al G. to the ground but fails since Al isn’t corporeal. And Al calls out LeBron for his aggression. (Ironically, they shift roles by the end of the film with Al G. mimicking Indiana University coach Bob Knight by throwing a chair out on the court.)

A human boy is hit in the face with basketballs several times in scenes played for laughs. (He’s unharmed.) Sylvester the cat spits up a live Tweety Bird, who was apparently swallowed by Sylvester some unspecified amount of time before. The Roadrunner is tied up and served to Wiley E. Coyote on a silver platter and Wiley almost eats him. Daffy Duck is also smacked upside the head by someone.

We hear a few uses each of “h—” and “d–n.” There is also about five seconds’ worth of bleeping when Al G. starts swearing at his team. Someone exclaims “Son of a glitch!” We also hear a few unfinished uses of “What the … !” “Dang,” “sucks” and “freaking” turn up, too. God’s name is misused twice.

Granny (one of the Looney Tunes) drinks several martinis. Another is shown next to a stack of empty mugs and is obviously drunk. One character polishes a beer mug at a saloon, but we don’t see any drinks actually being served.

Al G. is ambitious to an unhealthy point. He repeatedly searches for the recognition and respect he thinks he deserves. But rather than earning it through fair play, he resorts to kidnapping, lying, cheating, stealing and even deleting cartoons (which is about as close to death as a cartoon character can get). Furthermore, he sucks people from around the globe into the Server-verse (via LeBron’s social media accounts) and threatens to imprison them there forever if the Tune Squad loses.

Al G. is genuinely hurt when LeBron and the executives at Warner Bros. call his ideas “stupid.” However, he is similarly mean, calling the Looney Tunes “rejects.” And when Dom discovers Al’s deceit and leaves, Al G. insults the boy, telling him that LeBron was right for not supporting Dom’s dreams.

Dom is sometimes rude to his father, talking back and disobeying him.

As mentioned, we see visual references to many other Warner Bros. properties that are either R- or M-rated. In addition to those listed above, we see characters from IT (Pennywise the clown), A Clockwork Orange and the dreaded White Walkers from Game of Thrones.

Bugs tricks a fellow cartoon and steals his spaceship. Daffy Duck films himself “saving” a runaway train—in reality, he caused the incident so he could trick studio execs into believing he was a hero. Characters lie.

I’m going to give credit where credit is due. Space Jam: A New Legacy is a fun, mostly family-friendly film.

It illustrates a lovely father-son redemption story. LeBron was so focused on ensuring the success of his children (and his own legacy), that he never paused to find out if his kids even wanted to follow in his footsteps. But despite his early shortcomings, he never forgets what’s most important: family.

LeBron chases after Dom and does everything he can to save his son from Al G. And while he does this, he continues to try to connect with the boy on an emotional and relational level. That included admitting that his well-intended emphasis on pushing Dom to be a better basketball player came at the expense to actually listening to what Dom was passionate about.

It takes some hard work to succeed (much like basketball). And in the end, he realizes that Dom doesn’t have to be exactly like him to be happy, healthy and successful.

Those elements are definitely strong here. But the film isn’t as squeaky clean as it could have been. Language, while mild, is still present. And since Looney Tunes have always been able to entertain families without resorting to profanity, that small detail is actually quite disappointing.

Furthermore, there are references to other Warner Bros. films that feel gross and unnecessary. What child has seen A Clockwork Orange? Most adults haven’t even seen that film (and for good reason), so putting in that Easter egg for the parents bringing their kids to the film seems really gratuitous. Seriously, what’s up with that, Doc?

Those issues won’t be deal-killers for many families, but they are mildly disappointing in a film that otherwise has so much going for it. This sequel to the 1996 film is way more family focused and teaches a great lesson, especially to dads, about the value of investing in your child’s interests, making it a film that most families can enjoy without too many caveats.