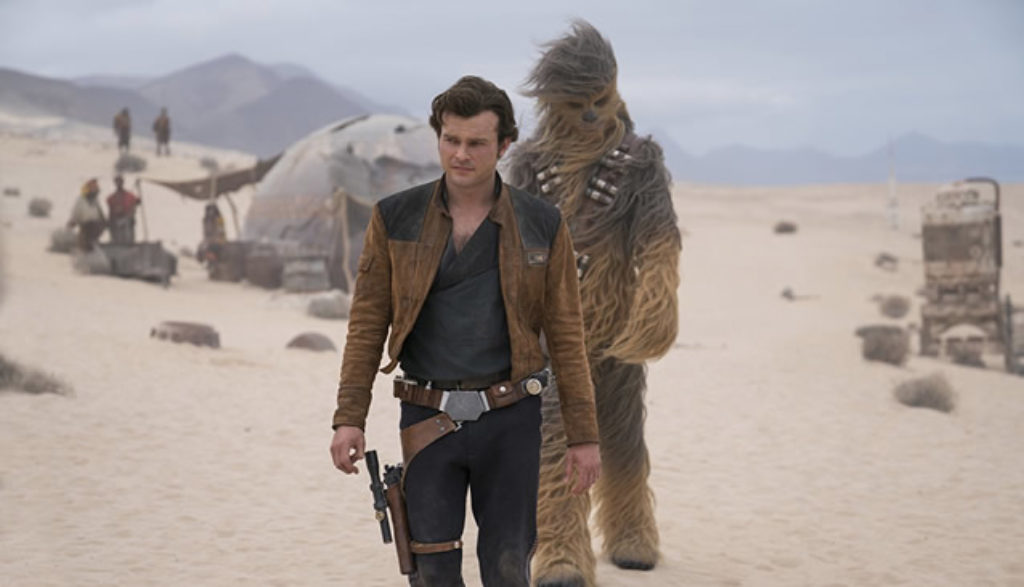 In spite of the Galactic Empire’s heavy-handed lockdown of, well, nearly everything, there’s still a lot going on in Han Solo’s life.

It’s been several years since the young man narrowly escaped life as something of an indentured servant on his grungy, crime-ridden home planet of Corellia.

Since then, he’s gone to war as a grunt in the Empire’s massive army. He’s stumbled across a group of smugglers led by a wily rogue named Beckett. And he’s nearly been devoured by a half-starved Wookie by the name of … Chewbacca.

Whooo! It’s been quite an eventful stretch. But for Han it’s only the beginning. See, he’s got plans. Big plans. Sure, he’s still a little wet behind the ears. And he might have to fall in with that Tobias Beckett guy for a while. But only until they can hit a big score. He just needs a little money to buy his own ship.

After that, he’s determined to return to Corellia to rescue his girlfriend, Qi’ra, who was unable to escape the clutches of the nasty criminal kingpin who kept both her and Han—and many other children and young people—under lock and key.

But once he rescues Qi’ra, there will be nothing to hold them back. They’ll live a life of adventure—doing what they want, letting the universe unfold before them.

He just needs that one big score. And hey, while he’s working on that, he might as well become the galaxy’s best pilot, too.

But it won’t be easy, of course. Because nothing ever comes easily when your name is Han Solo.

“I’m the only one in the galaxy who knows who you really are,” Qi’ra tells Han. “You’re the good guy.” She’s right. Even though Princess Leia once famously labeled him a “scoundrel” (in Empire Strikes Back), he’s really nothing of the sort here once you get beneath his cocky attitude. No, Han’s a good guy here, a young man who’s still surprisingly optimistic. He’s guided by a sense of inner idealism that shapes his decisions and pushes him forward. And he’s so committed to Qi’ra that he’d do anything to rescue her.

Along the way, Han puts his life on the line not only for her, but for some other worthy people and causes, too. Other characters do so as well at times (though a mix of selfless and selfish motivations swirls in several of them).

A feisty feminine droid known as L3-37 also exhibits a surprisingly strong moral core. “She” speaks of her longing to find a purpose in her existence. She also risks everything to free and protect scores of slaves (both droids as well as various organic races) who are being held prisoner and laboring under harsh conditions on a mining planet.

Elsewhere, someone gives their life to protect a loved one. A group of formerly oppressed people rally together, unleashing rebel-like attacks on an evil and destructive crime syndicate known as Crimson Dawn. The film also repeatedly emphasizes the importance of belonging, of having people who care for you. “No good to die alone, kid,” someone tells Han.

Though The Force has figured significantly in most Star Wars movies, that famous “energy field created by all living things” (as Obi-Wan described it) is wholly absent here, with nary a single mention of it. In fact, with the exception of L3-37s momentary musings on finding her purpose, there’s nothing here that could be described as spiritual at all.

Han and Qi’ra are in a romantic relationship. We see them kissing. In one scene on the Millennium Falcon, Han glances suggestively at a bed as they talk and canoodle, implying (it would seem) that they should get in it together (and that they’ve done so before). One of Qi’ra’s outfits displays some cleavage.

Later, we learn that Qi’ra has essentially become the slave-like property of another crime boss; she’s often at his side and it’s perhaps very subtly (and creeepily) suggested that nothing is off limits in their relationship.

Han meets another young “scoundrel” of sorts named Lando Calrissian, the owner of the Millennium Falcon. His copilot is L3-37, and the feminine robot confesses to Qi-ra that she believes Lando is in love with her. Qi’ra considers their robot and human anatomic structures and asks, “How does that work?” “It works,” L3 replies bluntly.

At that point, Qi-ra’s surprised and skeptical expressions invite us to view L3’s infatuation with Lando as a figment of her overactive digital imagination. But Lando is exceptionally tender toward her in a later scene, suggesting that there might be something to their odd human-robot romance after all.

While listing all of Lando’s strengths, Qi’ra says, “And then there’s his prodigious …” before being interrupted by Han.

Though never bloody or gory, this is a swashbuckling adventure featuring mountain-crumbling explosions, blaster shootouts and off-camera executions. Han is forcefully pummeled in a few scenes. And in the gun battles, people get tossed violently about, while robots and humans alike are blasted to the ground in the chaos.

One character is shot in the shoulder and eventually succumbs to the wound. A government official is murdered. (We see his body on the floor, after the fact.) A man is stabbed with a sword. A man is shot in the chest.

Perhaps the most visceral moment in the film involves the Wookie, Chewbacca, ripping off a baddie’s arms. We don’t see the limbs’ actual separation, but we do see Chewie holding up two dismembered arms (though without much blood). The scene is actually played for laughs, a nod toward a similar story that Han told in Star Wars.

The Millennium Falcon, of course, seeks to outrun a Star Destroyer and ever-present pursuing TIE fighters—with several of the latter meeting explosive ends. A massive, razor-toothed creature threatens the Millennium Falcon in space, as does a very hungry black hole.

All that said, this Star Wars story is less deadly and devastating than other stories in the saga. (No space stations full of people or crowded planets meet their end, for instance.)

One unfinished use of “sh—” joins just about half a dozen uses of h—,” and less frequent uses of “d–n” and “a–.” We hear one reference to “bantha crap.”

Even the “good” guys here are often thieves, marauders and miscreants in this adventure. People steal and lie frequently (at times, it should be added, to save their own skins). We see a couple of gambling scenes, and it’s suggested that one character frequently cheats at high-stakes games he always seems to win.

Beckett tells Han, “Assume everyone will betray you, and you will not be disappointed,” His cynical admonition is repeatedly proven true here, perhaps even alluding to the more hard-bitten and similarly cynical character we know Han will one day become himself.

Qi’ra’s wrist has been branded by a Crimson Dawn symbol, suggesting that she’s owned by the nefarious crime syndicate.

Another scene played for a laugh shows Han and Chewie’s bare feet in a shower together (after they’ve just escaped a massive mud pit), with Han complaining that he needs a bit more room.

The Star Wars saga has gotten so serious. All the bad-guy glowering and massive death tolls of the latest pics have tended to weigh a bit heavily on this 41-year-old franchise set in a certain galaxy far, far away. Frankly, there’s a bit of twinkle and lighthearted excitement gone missing.

So fans who cut their teeth on the original trilogy may well appreciate what director Ron Howard has done with this story set about a decade before the events of the original Star Wars: He’s made things fun again.

In young Han Solo’s universe, the evil Empire and an emerging Rebel Alliance are both just on the outside edges of the narrative. The main thruster rocket here is not galactic war, but the thrill ride of Han’s origin story. It’s a tale that spins, soars and blasts like the Millennium Falcon, captained, of course, by the galaxy’s most daring pilot.

Parents of younger fans will still need to consider that amid all that swashbuckling action, there’s plenty of peril to plunge through. And Han himself hangs with a rogues gallery of characters whose character is sometimes heroic, sometimes self-serving.

There are definitely heroic seeds at our favorite space scoundrel’s core, though, seeds that simply need a little life experience to nurture them to growth. And that’s exactly what this swooping heist tale is all about. You get a yarn filled with romance, high-stakes gambits, flashy sidekicks, a spunky robot and a whole lot of who’s-going-to-outfox-who intrigue.

Ultimately, it’s the kind of colorful adventure that one could imagine Harrison Ford’s version of Han recalling with a great deal of flourish … and a twinkle in his eye.