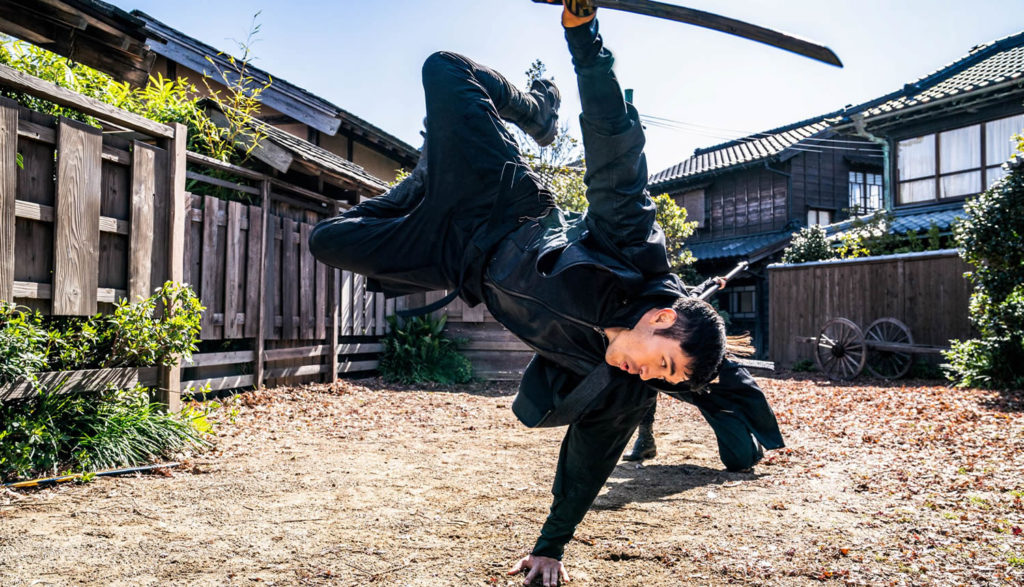 Since the modern incarnation of G.I. Joe began in the early 1980s, Snake Eyes has always been one of its most mysterious members. Birth? Classified. Upbringing? Classified. Even his military rank was a secret for most of his career. Why, one wonders how he even got his name. Surely he wasn’t the son of Mr. and Mrs. Eyes, was he?

Turns out, the truth is much sadder.

When the future Snake Eyes was about 10 years old, he and his dad spent some time in a isolated cabin in the Northwest United States. And when the boy overheard his dad call the place a “safehouse,” he asked his pops where, exactly, that safe was.

His father explained that the word “safehouse” was just another word for cabin—maybe because you feel so safe there.

Turns out, it was anything but.

Late that night, home invaders infiltrated the cabin before the dad and son could make an escape. The father told the boy to hide as he faced the invaders, who promptly made him roll a pair of dice for his life. Win, you live, the leader told him. Lose, and you die.

No one really said what number the man had to roll to win, but no matter. The dice clattered across the floor and turned up double ones: snake eyes. And everyone knows that that’s a losing roll.

Watching your father die from a dice roll has gotta mess you up something fierce, and so it was. The boy grew up (somehow) and eventually made his way as a brawler—fighting anyone who would take him on in a ring, or a pen, or a barn. When no one would fight him anymore, he’d move on. No one knew who he was or where he came from. They only knew him by his nickname: Snake Eyes.

Until one day when a mysterious man came by and offered him a job. Snake Eyes wasn’t that interested until he was told the signing bonus: The mysterious man promised him that, if he joined up, they’d serve up the man who murdered Snake Eyes’ father.

Well. That’s pretty much the only thing in the world that Snake Eyes ever wanted: A little revenge. He signed up pronto and bided his time, waiting for the promise to take hold.

But as he works in the man’s fish-packing plant, stuffing machine guns in massive fish to be shipped over to Japan, Snake Eyes must’ve wondered whether his boss was a bit of a snake himself.

Spoiler warning: Snake Eyes’ first boss is, indeed, no good. In fact, he’s a leader of a branch of the Yazuka, the Japanese version of the Mafia. But Snake Eyes’ contact with the Yazuka soon leads him to join what would appear to be a much more honorable group: the mysterious Clan Arashikage.

The Arashikage are big on honor. And as Snake Eyes spends time in the clan’s fortified compound, he’s taught plenty of lessons about what it means to be a virtuous warrior.

A big part of his initiation into the clan involves three trials, and the first two are inherently moral, not physical, tests. In the first, Snake Eyes is encouraged to “abandon ego,” submitting to a higher call. The second involves him facing up to his own weaknesses—those urges that might corrupt him. (Star Wars fans, think Luke Skywalker in the cave at Dagobah.)  Honesty, duty and purity of purpose are all required of full-fledge clan members.

Snake Eyes is not, initially, very honest, nor is his purpose particularly pure. But if he falls short of what’s expected of him, it’s not from lack of good role models. Akiko, the head of the clan’s security battalion, is a particularly zealous defender of both the clan (which she considers her only family) and its ideals. And when she sheathes her sword after a quick “getting-to-know-you” fight with Snake Eyes, she tells him scornfully, “a win without honor is no win at all.”

And while Snake Eyes doesn’t buy into the Arashikage way initially, he eventually embraces much of it—risking his life to save the clan and his friends, and to right a grievous wrong.

The clan safeguards a fabled stone—a jewel that allegedly harnesses the power of the sun—within its walls. Tommy Arashikage, Snake Eyes’ closest friend and benefactor, tells Snake Eyes that it was supposedly bequeathed by the Sun Goddess.

Women wear some form-fitting costumes, and Snake Eyes visits a public bath where men loiter around without shirts and with relatively skimpy loin wraps. During the closing credits, we see some women in midriff-baring outfits.

It’s pretty remarkable that Snake Eyes has any plot at all, given the number of fight scenes the film contains. And boy-oh-boy, do people fight.

It’d be impossible to tabulate every kick and strike and stab, so let’s just say that we see countless examples of them all. It’s not uncommon for two fighters to take on 20 or so bad guys—and leave them as a pile of corpses as they walk away, perhaps a little out of breath but otherwise unharmed. Tommy flails away with two Samurai swords; Snake Eyes makes due with one (along with whatever weapon-like accoutrements might be laying nearby). Other characters dispatch enemies with guns, or darts, or crossbow bolts, or killer fans. One character uses a magic, glowing stone to torch buildings and, more disturbingly, blow people up.

Most of these casualties pile up without much actual bloodshed, somehow, and for the most part you don’t see any particularly grotesque deaths. But you still see plenty of folks fall off buildings or flip around with their twirling, crashing motorcycles or tumble off moving vehicles. And while Snake Eyes does suffer an injury (after a vehicle that he and Tommy are in is pin-cushioned by about 50 swords), and we do see a little blood, he heals pretty quickly.

Buildings ignite. Cars crash. People are choked by chains and have their heads bashed into sinks. Two people purposefully cut their hands on a sword—a prelude to an apparent blood pact. In the first part of the movie, we see someone point a gun at the head of Snake Eyes’ father; the camera turns away before the trigger is pulled, but we hear the shot’s report echo through the woods. The killer later brags that he “killed a lot of people.”

[Spoiler warning] The most frightening scenes, though, involve a trio of extremely large snakes. One man is nearly crushed by one, and another is swallowed whole. One snake has its head cut clean off.

We hear at least one and perhaps two f-words. Other than that, the bad language quotient is surprisingly sparse, with just one use each of the words “a–” and “b–ch.”

We see the inside of what looks to be a saloon. During a post-credits scene, a character on a private jet is served a glass of whiskey, with the bottle resting on a small in-flight table. (The woman who serves him also pours herself a drink and seems to offer a toast.)

A lot of folks, including Snake Eyes, are being less-than-honest throughout the film, and these deceptions form the backbone of the movie’s plot.

Snake Eyes’ whole origin story revolves around a bet of sorts—the roll of the dice. But even that gamble was pre-ordained: The dice, it turns out, were weighted to always come up snake eyes.

Back in the 1980s, when G.I. Joe really took off as both a Hasbro toy and a popular animated TV show (called G.I. Joe: A Real American Hero), the series was known for its public safety lessons at the end. Most would conclude with a character saying, “Now we know,” with someone else adding, “And knowing is half the battle.”

Snake Eyes has a few lessons of its own. No, the film isn’t imploring viewers to look both ways before crossing the street; the morals go a bit deeper here, with the storyline stressing the importance of honor, humility and even redemption.

“We all make mistakes,” someone tells Snake Eyes. “It’s what we do next that really matters.”

That’s a nice lesson. But, like the tagalong lessons at the end of the TV show, those lessons could be easily forgotten in the hail of bullets and showers of steel and cascades of corpses here.

Snake Eyes knows what its audience wants: action, action, action. And that’s just what it delivers—in scores of body bags. While the action isn’t bloody, it’s undeniably lethal. And a couple of unwarranted and, honestly, out-of-place f-words sour the story yet more.

Snake Eyes spends most of his story on the edge of good and bad, teetering on the moral blade like a tightrope. The movie doesn’t bother: It plays on both sides of the blade, and that makes it both a blessing and a curse for its viewers.