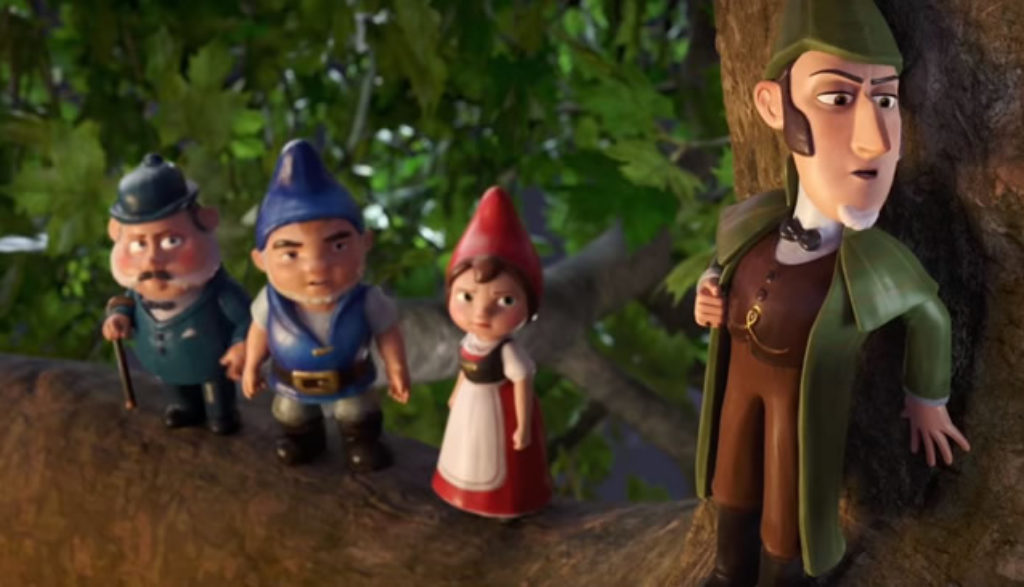 Ask any couple who’s been married for more than a nanosecond, and they’ll tell you: Long-term relationships aren’t always a rose garden. Even if you live in one.

Perhaps Gnomeo and Juliet thought the worst was behind them after they got hitched. After all, the two garden gnomes somehow survived a runaway lawnmower, two clans of feuding backyard ornaments and (I’m assuming) increasingly severe HOA covenants to fall in love and restore their little corner of England to some (ahem) lawn and order.

But all that happened a whole movie ago. Little did they know that the hard work was just beginning.

Their owners, Mrs. Montague and Mr. Capulet, comprise a couple themselves, and they’ve moved from Stratford-upon-Avon to the less bucolic confines of big-city London. For their garden gnomes and other ornaments, the new backyard is a distinct step down—and an opportune moment for longtime garden rulers Lady Bluebury and Lord Redbrick to step aside. They swiftly name Juliet and Gnomeo as their successors, who promptly get to work sprucing up the place.

Juliet finds new purpose in her new duties. She’s determined to make their walled garden a showcase, apparently. And in her drive to succeed, she lets her relationship with Gnomeo stagnate.

Gnomeo believes he must rekindle those loving feelings that Juliet once had for him, so he takes off on a harrowing mission through London to find and steal a new garden centerpiece: a beautiful, rare orchid. Alas, Gnomeo is no master thief, and Juliet’s forced to dive into the city herself to rescue her ankle-high beau. And when Gnomeo tries to explain his good intentions—adding that maybe Juliet loves her new role as garden master more than she loves him—Juliet gives her a piece of her porcelain mind.

“The garden can’t wait and you can,” she tells him.

But when they return to the garden, they discover that every one of their friends—every hat-wearing gnome, every stone bunny, every frog sprinkler (well, technically, there’s just one of those)—has vanished.

It’s not the first such crime, either: Garden ornaments have been disappearing in London with frightening regularity, we hear, and not so much as a tiny footprint has been found at any of the crime scenes.

Enter Sherlock Gnomes, sworn protector of London’s garden gnomes, and his faithful associate, Watson. Sherlock quickly detects the work of his old, hitherto-presumed-to-be-broken adversary, Moriarty: the nastiest tiny statue this side of that jerk of a fountain in Venice.

Yes, the whole sordid affair bears the distinct calling card of Moriarty, (quite literally, actually, given that they find a big card with an “M” on it). So Sherlock swings into action, determined to save the day and London’s garden gnomes along with it. Meanwhile, Juliet, Gnomeo and Watson scramble behind the daring detective.

But as all four of them will discover, this particular case is anything but elementary.

Sherlock Gnomes, the movie, offers one central, inescapable and positive message: Don’t take your loved ones for granted.

Both Juliet and Sherlock have been guilty of doing just that in their own ways. Over the course of the film, they must learn to reset their priorities and find a new love and appreciation for the people closest to them. “A man doesn’t make you strong,” Juliet says. “But the right partner makes you stronger.”

But even when Sherlock and Juliet treat their respective “partners” shabbily, their shunned associates can sometimes show grace and understanding toward them, as well as a certain awareness of their own shortcomings. “We all have our good and bad sides,” Watson tells Gnomeo. “Sherlock, Juliet, me.”

All four of the gnomes in question risk their lives (such as they are) to do the right thing, demonstrating a great deal of courage and ingenuity in the process.

Garden gnomes don’t seem to be overtly spiritual types, though Sherlock does strike a yoga-like pose while thinking deeply (or perhaps meditating). Our heroes also venture into an establishment filled with Asian toys and ornaments—including waving cats called maneki-neko in Japan. (Such cat ornaments are considered to be good luck charms in some Asian cultures.) There’s a reference to the “Sistine Chapel of evil plans.” The movie opens in a library festooned with stained glass windows, giving the place the feel of a church.

The Mankini Gnome, who first appeared in Gnomeo & Juliet, returns for an encore jiggle here, and he still hasn’t found anything more to drape over his awkward porcelain body than this one-piece, thong-like swimsuit. His rear gets more screen time than some characters do, sometimes dotted with red indicating a bit too much sun exposure.

Juliet and Gnomeo kiss and hold hands, as do a few other gnomes and garden ornaments. (When one asks another where he learned to kiss like that, the gnome says, “The internet.”) Benny (another gnome) crushes on Nanette, the garden’s frog-shaped sprinkler: Her visage graces Benny’s laptop screen, in fact.

Benny and Nanette take part in a play wherein their genders have apparently been switched for comedic effect. (Benny wears a princess dress.) But when it comes time for the two to kiss, Benny balks—telling Nanette that when one person (or gnome) likes another (or frog) and wants to kiss, no kiss should happen unless that affection is mutual. (No one can accuse Benny of sexual harassment.) The hesitation prompts a quick change in roles, and when a new gnome takes Nanette’s place, Nanette (still not quite grasping Benny’s affection for her) accuses the play of being “froggist.”

Slapstick humor abounds here, with scads of gnomes and garden ornaments tripping, falling and bumping into each other. Goons—crude gnome ornaments—are sometimes used as tools, with their pointy hats jammed into the ground by more advanced gnomes as they (the goons) utter exclamations of pain.

One gnome takes a tumble from a great height, and we hear a crash and a tinkle after it vanishes amongst the tree tops; it’s a sound that indicates the ornament has perished. (At least one young viewer in my screening was horrified, judging by his screams of anguish.) Another gnome breaks one of its legs during a kerfuffle, and walks for the rest of the movie with a limp. Characters shoot fireworks at other characters. Still another appears to be crushed underneath a shower of dinosaur bones.

Sherlock kicks a large (and living) stone gargoyle, but apparently to no effect. A few characters fall into water, and some sink like the stones they technically are. Irene, apparently an ex-girlfriend of Sherlock’s, rips the arm off a large gorilla toy during an arm-wrestling match, much to the gorilla’s chagrin: We see a bowl full of other arms nearby, that detritus further proof of Irene’s arm-wrestling prowess.

Cat statuettes chase Sherlock and his friends, brandishing their claws. Sherlock and Juliette, disguised as a squirrel, are forced to run away from a large dog. (It’s a hound owned by the Baskervilles, we’re told.) Sherlock admits that the dog once bit him.

Technically none, other than a quick use of “heck.” We do, however, hear sly nods in the direction of profanity when gnomes utter exclamations like “fudgebucket” and “ffffertilizer.” Watson says “cheese and crackers,” an apparent feint toward using Jesus’ name as an expletive, a couple of times.

A gnome spends most of the movie sitting on a toilet. When he’s finally pried loose, he waggles his rear in joy, exposing himself to the onlooking gnomes (but not to the camera). Gnomeo tries to steal a flower from a London shop.

In our market-based, consumer-oriented culture, we can determine the relative value of something relatively easily: A thing’s value is determined by how much we’re willing to spend on it. We’ll spend more on a steak dinner than a fast-food hamburger. We’ll spend hundreds of dollars to hear Taylor Swift in concert. Taylor Dane? Not so much.

What we value in our own lives is equally obvious—if not to ourselves, then at least to those around us. What we value is revealed by what we spend our resources on. Our time. Our attention. Our effort. In its own wacky way, this movie illustrates that important lesson.

Sherlock Gnomes’ lesson, such as it is, is a good one for kids in the audience. It helps them to appreciate the people around them more, and to treat the folks in their lives with care and respect.

But given that few 7-year-olds are dealing yet with work-life-balance issues, the movie’s moral is perhaps more squarely aimed at the moms and dads in the audience. We may not realize it, but our kids watch our behavior closely. They see how we interact with our phones. They notice if we miss a school play or soccer game. They don’t necessarily understand our duties or deadlines, but they watch how we spend our time—and what, and who, we spend it on.

Outside of that core theme, Sherlock Gnomes is simply a light diversion. This is your standard, plastic, pink flamingo of a movie—colorful and cute and maybe even fun, but kinda tacky, too. While the flick steers clear of overt problem areas, its unfortunate forays into bathroom humor and sly feints toward profanity sully this unasked-for sequel.

But let’s not be too hard on this gentle, reasonably inoffensive movie. To steal a line from the Bard, all’s well that ends well.