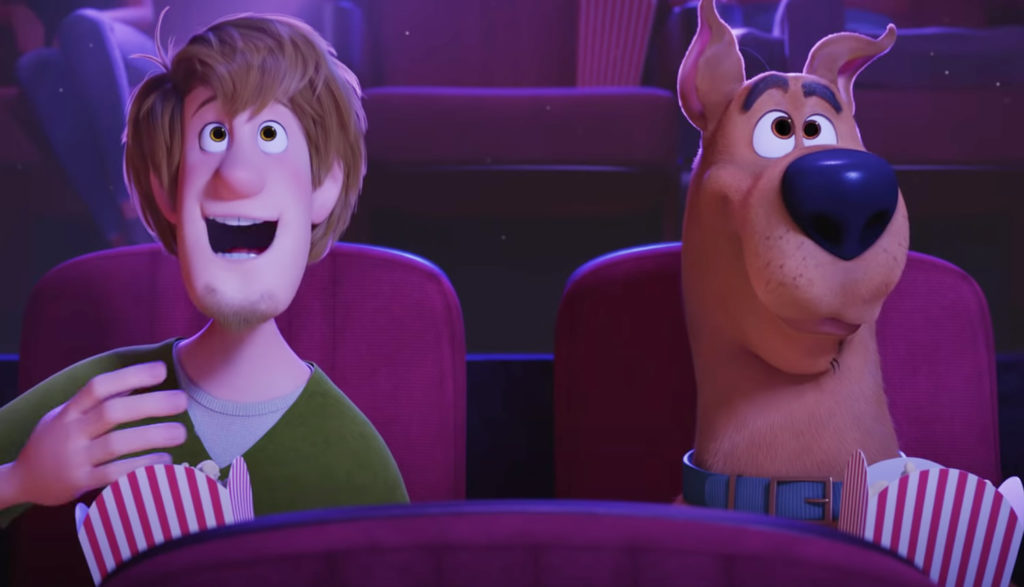 Honestly, the most terrifying dangers that the Mystery, Inc., gang faces are cholesterol and tooth decay.

Oh, the gang—Fred, Daphne, Velma, Shaggy and, of course, Scooby-Doo—have stared down their share of alleged supernatural spooks: They’ve dealt with supposed monsters and mummies and long-dead prospectors. They’ve crashed into their share of walls and fallen through more than a few trap doors. But when a skull-sporting alien turns out to be a not-so-scary real-estate agent, well … let’s just say you’re not gonna base a History Channel reality show on your collection of rubber masks.

No, those monstrously unhealthy sandwiches and a never-ending pantry of Scooby Snacks are far scarier to health-conscious, 21st-century audiences than anything these enduring characters have to deal with.

But now, the gang must deal with a truly unexpected peril that could mean the end of Mystery, Inc., as we know it: Simon Cowell.

See, Scooby Snacks are expensive. And that old ’70s-era Mystery Machine could surely use a tune-up by now. So Mystery, Inc., needs an influx of cash to grow, and Cowell is willing to invest in the business—but only on the condition that Scoob and Shaggy aren’t a part of it. I mean, really: Do they serve any legitimate business purpose at all? Outside of literally eating all the company’s profits?

Shag and Scoob know when they’re not wanted, so they tromp off in a huff to a local bowling alley. Alas, both the balls and the pins turn out to be vicious killer robots—servants of the aptly named Dick Dastardly, whose latest nefarious scheme goes way beyond your typical mask-wearing bank president.

It seems that Mr. Dastardly—sporting his trademark curled mustache and driving a seriously pollution-spewing aircraft—hopes to unlock a gate to the Underworld, where Alexander the Great allegedly stashed away all of his treasure. The catch: Ol’ Alex (who apparently was an expert supernatural metalsmith when not conquering the known world) fashioned the gate to open only by a dog. His dog, Peritas.

And guess who’s the only living descendant of Peritas? Scooby-Dooby-Doo, that’s who.

But the Underworld holds more than treasure. It’s, y’know, the Underworld, and thus populated by who knows what sort of ghoulies and beasties and demons.

And jeepers, I don’t think any of those supernatural critters will be wearing a rubber mask this time ’round.

While meeting with Simon Cowell, Shag and Scoob pitch their value to the team in terms of friendship. “What’s more valuable than friendship?” Shaggy says.

This, in a nutshell, forms the central moral tension of this show. The friendship between Shaggy and Scooby—which we see take shape in an origin story of sorts—is indeed tested mightily. But I don’t think we need to offer a spoiler warning here in telling you that Simon Cowell turns out to be dead wrong.

And Shaggy and Scoob’s friendship isn’t the only one we see here, of course. Scoob! proves to be a veritable Avengers-like gathering of vintage Hanna-Barbera cartoon characters (or, maybe more fairly, a Captain America: Civil War gathering), and most of them learn valuable lessons along the way.

For instance, the tech-imbued superhero Blue Falcon (actually, the original Falcon’s son, Brian) shows up with his famous robot pooch Dynomutt, and he learns what it means to be a hero. One of Dastardly’s tiny robots learns the concepts of love and gratitude, and as such leads a cute rebellion against evil. And even Dastardly turns out to be not quite the hardhearted individual we might suspect him to be.

The original incarnation of Scooby-Doo was notoriously supernatural-phobic. No ghosts were either caught or harmed in the making of that 1970s Saturday-morning TV show, and every episode seemed to end with a dramatic unmasking and a bitter criminal being led to jail.

Scoob! takes that premise and swings it around 180 degrees. Genuinely supernatural happenings are the order of the day here.

We don’t see much of the aforementioned Underworld, but the movie suggests that it’s indeed the literal Underworld of religion and myth: If the gate is opened, Velma says, “Then all hell breaks loose. Literally.”

But the movie leans away from a Christian understanding of the Underworld and pushes deep into classic Greek mythology. Dastardly must, for instance, open the portal using the skulls from the three-headed dog Cerberus (sometimes called the Hound of Hades). And the adventure eventually makes its way to a supernaturally restored version of ancient Athens, filled with all manner of temples and idols to Greece’s revered gods and goddesses. And certainly, the most terrifying threat our heroes face is of supernatural origin.

When Blue Falcon makes his entrance, he’s accompanied by narration—telling his audience of two that falcons have long been symbols of freedom and whatnot: We see an ancient Egyptian depiction of a falcon, perhaps meant to be a manifestation of the god Horus, very briefly. Elsewhere, Blue Falcon talks about his father moving on to “a better place,” before clarifying that means Palm Beach.

Fred, driving the Mystery Machine, is pulled over by a beautiful female police officer. He flirts with her awkwardly before she’s revealed to be Dick Dastardly. “I have so many mixed feelings,” Fred says when Dastardly unveils his face from behind a rubber mask. And later, Fred admits, “As far as masks go, I gotta say, she was pretty hot.”

Scoob and Shaggy are just really, really good friends. But the dialogue between them is meant to humorously mirror that of a more romantic relationship at times. (An example: We see when Shaggy and Scooby first meet as children; Shaggy shyly gives Scooby a dog collar, telling the dog that he was worried about buying it at first. He didn’t want to appear to be “too desperate or come on too strong.”)

A robot may have a bit of a crush on Daphne. A character talks about his alleged paternity of a dinosaur. Blue Falcon has everyone pose for a selfie under the hashtag #foxyfalcon. While getting fitted for a new outfit, Scooby receives a tickling blast of air/technology in a sensitive spot.

We see plenty of slapstick violence throughout the film. People fall and are flung from dizzying heights, are hurled into walls and are spun dizzyingly around in sci-fi gyroscopic contraptions. Characters get smashed under rocks, too, but none of the violence seems to cause any lasting damage.

Indeed, robots may suffer more than the human characters we see. At least that’s what’s indicated when Dastardly rips the head off of one of his mechanical minions, telling him that it hurts the robot far more than it hurts him. (He replaces the head, which he throws into a furnace, with a portable vacuum cleaner.)

Not that these robots are exactly pacifistic. They can shape-shift a bit themselves. And when they transform into little techno-scorpions, they shoot lasers at various adversaries; at least one brandishes a pair of little chainsaws.

A character or two are nearly devoured by a gigantic supernatural beast. A fly gets swallowed by a carnivorous plant. People are smashed in the head with clubs. One character smashes through rocks, leaving a very characteristic Hanna-Barbera silhouette hole of the character behind. A dog chews on someone’s leg.

One minor character appears to be dead for a bit but eventually revives.

So, Blue Falcon carries around weapons called, naturally, falcon bombs. And in a moment of peril, Shaggy suggests they “drop some f-bombs.”

They do … but as the above scene suggests, only via technicality.

The show gives a few nods to those other f-bombs when Blue Falcon talks about his father’s autobiography (“No Falcon Around”) and his follow-up (“Just Falcon Around”). The movie gets plenty of mileage from the double entendre of Dick Dastardly’s first name, as well.

We also hear a few very cartoonish interjections (“Drat” and “Rasm Frasm,” for instance), along with some mild name-calling (“dipstick” and “flatulent fleabag,” for example, and Blue Falcon sometimes calls Dynomutt “Dyno-butt”).

Besides Scooby’s long-running addiction to Scooby Snacks (after which he was apparently named), the only other reference we hear to alcohol is when Velma examines one of Dastardly’s stray mustache hairs and declares she detects 12-year-old Scotch in the mix. “That guy my dad?” Daphne quips.

There’s some talk, and a gross sighting, of large pterodactyl droppings. When Fred complains about being unable to get a certain smell out of the Mystery Machine, Scoob says, “I told you I needed a walk.” Dynomutt suggests that anyone who gets motion sick on Blue Falcon’s craft should “puke” on Blue Falcon.

A youthful Scooby steals a big bunch of pumpernickel and leads a bicycle-riding police officer on a merry chase. People steal other things, too—and, as you might expect in a Scooby-Doo story, obscure their identities. Dick Dastardly’s ship is in some serious need of a good emissions check.

We see a portion of Dick Dastardly’s rap sheet, which includes “tripping old ladies” and “theft of mustache oil.” There’s some discussion over whether using a relative’s Netflix account constitutes stealing.

At times, Scoob! feels like some strange attempt by Hanna-Barbera and Warner Brothers to launch a shared cinematic Saturday cartoon universe.

’Course, in a way, you could say that Hanna-Barbera actually launched the whole concept for the screen. Long before the Avengers took on Loki for Marvel/Disney, the Justice League fought Steppenwolfe for Warner Bros. and Tom Cruise (oddly) became a mummy for a misbegotten Universal Monsters shared universe, Hanna-Barbera cartoons were competing against each other in the Laff-A-Lympics.

It was always an odd universe, what with Superfriends’ Batman & Robin competing against, say, Yogi Bear. But Scoob!, for all its callbacks to those animated shows of yore, feels odder still. As in, its odd lack of a definable audience. (Oddience?) The movie’s clearly aimed toward kids, but how many kids have ever even heard of Dynomutt? And do nostalgia-driven parents really want to watch a movie that tries to turn these characters into hipper, crasser, winking self-referential versions of themselves?

Scoob! does have some moments of wit for adults and good lessons about friendship and heroism for children. In this coronavirus-laden time, where many families are starved for entertainment they can all watch together, you could do worse—far, far worse—than Scoob!.

But in trying to update these characters, it sullies the franchise with supernatural hokum, unfortunate bits of bathroom humor and really unwanted allusions to profanity—allusions that might fly over the heads of the movie’s youngest viewers but will be pretty recognizable for anyone who can cross the street without holding hands.

Scoob! is a movie that doesn’t quite know what it wants to be when it grows up—and that’s a problem for the not-quite-grown in its audience, too.