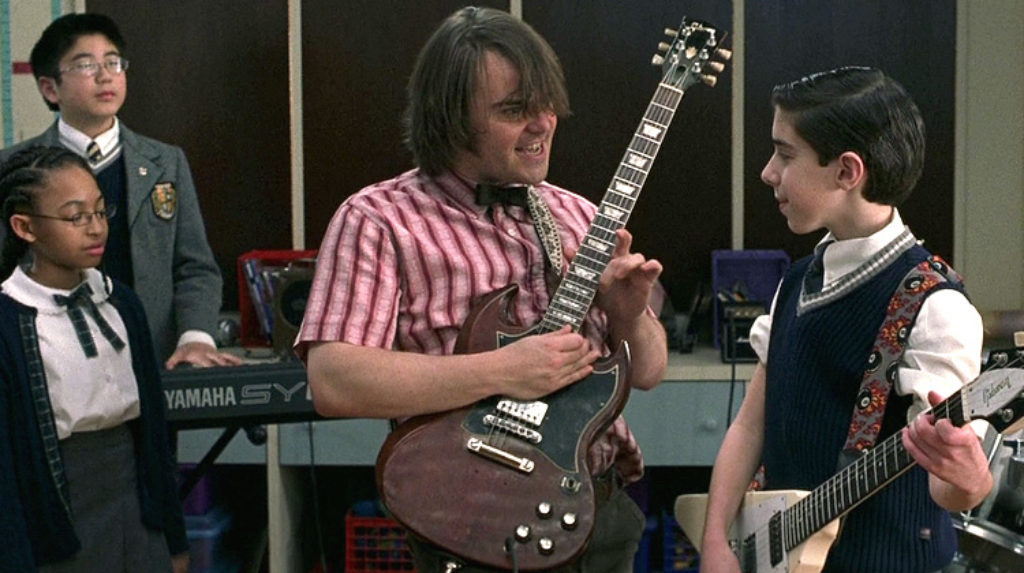 Dewey Finn’s life revolves around all things rock ‘n’ roll. He not only knows rock history and rock jargon, he knows where drummers store an extra a pair of drumsticks (in the back of their shirts) and what posture looks best when strumming power chords.

Lest you begin to think Dewey’s just an over-the-top groupie, you should know that he plays lead guitar in a rock band himself. And it’s his plan to grab top honors at a radio station’s Battle of the Bands contest. But his band mates have other ideas, and they give Dewey the boot. Desperate for rent money, he racks his brain for inspiration. Should he start a new band? Or just hawk his cherished Gibson guitar?

Before he can do anything too rash, he fields a call for his buddy and landlord, Ned, a substitute teacher. On the phone is Principal Mullins of Horace Green Elementary School, an uppity school for children of privilege. She needs Ned to substitute teach. Altering his voice and claiming to be his pal, Dewey accepts the job. Reporting for duty, but only to score a paycheck, he ignores the lesson plans, choosing instead to let his students have ongoing recess. But even they get tired of eternal playground time, so Dewey concocts a plan to use the kids to win the Battle of the Bands by fashioning them into a rock group.

Overnight, Dewey begins to take teaching “seriously”—or at least his version of teaching. Three-chord progressions. Keyboards. Bass. Percussion. Dress. Attitude. Stance. Watching classic rock performers on video and imitating them becomes a classroom staple. But something else is happening. Along the way, Dewey begins to care about his students.

Although Dewey is your basic self-obsessed moocher, after a few weeks with his students he begins to genuinely care about their welfare. When one girl becomes “sick” before an audition, he digs deeper to find out that she’s really just insecure about her weight. To comfort her, Dewey points to his own problem in that area and reminds her that Aretha Franklin is a big lady. When his keyboardist thinks he can’t be in the band because he’s “not cool enough,” Dewey explains that band members are the “bees knees”—meaning hip. When one student wanders off at the audition and winds up in a rock group’s van (they’re smoking and drinking), Dewey rebukes the rockers: “You’re setting an example—start acting like a responsible adult. He adds, “Rock ain’t about getting loaded and acting like a jerk.” (It’s great advice. Unfortunately, Dewey doesn’t always follow it himself.)

One girl tries out for the band by singing “Amazing Grace.” Before the big gig, Dewey leads his class in a “prayer” that begins, “God of Rock, thank you for this chance to kick a–.” He ends, “In your name we pray.” Dewey explains to one student that when he’s onstage, “People worship me!”

A boy who asks to be the group’s fashion designer is used by the filmmakers to send the message that this young child is already (born) gay. When Dewey is making assignments for all his students, he designates three girls as groupies. One girl, however, checks out the term’s meaning on the Internet and the next day gets in his face, telling him that groupies are “sluts—they sleep with the band.” Dewey wears a T-shirt (not to school) that reads, “Getting Lucky in Kentucky.” When he queries his class about the meaning of being a rock musician, one boy answers, “Scoring chicks.” At one point Dewey advises, “No late night parties, drinking tequilas and trying to get lucky.” A rocker at the Battle of Bands has “sex” tattooed on his stomach. Ned and his girlfriend are “roommates.”

Regarding classroom discipline, Dewey explains to Principal Mullins, “I have no problem smacking them in the head.” The principal rebuffs him, saying, “We don’t do corporal punishment.” Dewey does push a student into her seat (not roughly). He also stage dives (no one catches him) and knocks over a chair in anger.

Dewey gestures with three fingers to his original band mates and asks them to “read between the lines.” “A–,” “sucks,” “butt,” “h—” and “d–n” join a handful of misuses of God’s name. The students sing a chorus that goes, “Kick some a–.”

Dewey’s original band plays in a club where the beer flows freely. Dewey himself imbibes (off camera), telling his students on his first day that he’s battling a hangover. He then proceeds to teach what a hangover is—countering one student’s belief that he’s presently drunk (“I was drunk yesterday”). A girl says she thinks “rock” is synonymous with “getting wasted.”

Dewey’s fellow teachers tell him of a time when Principal Mullins got “drunk at the alumni dinner.” Armed with that information, he takes her out drinking (telling her it’s for coffee), and while she’s intoxicated requests permission for a “field trip” (his term for the Battle of the Bands). He quips that another teacher “must be on crack.” In his bedroom is a large inflatable liquor bottle.

After Dewey asks his class what type of music they like, one girls responds, “Christina Aguilera,” while a boy boasts, “Puff Daddy.” These two disturbing acts join a host of other bands (strewn throughout the movie like so many product placements) with significant lyrical problems such as AC/DC and the Sex Pistols. Band stickers on Dewey’s bedroom window show that he’s also a fan of deeply problematic bands such as Nine Inch Nails and Cannibal Corpse.

School of Rock revolves around Dewey’s deception, and to keep it going he has to lie repeatedly. When he tries to peddle his guitar for cash, Dewey claims Jimi Hendrix played it. He lies to his fellow teachers and to the principal about his teaching experience (“I studied with Eric VanStrossenberger”).

When Dewey does teach, he mostly works to convince his students that “the man” (authority) is out to get them. He encourages a rebellious look and attitude, even allowing the class to tell him off (believing anger helps in the writing of a good rock ballad). Dewey asks his students not to tell their parents about what they’re learning and uses technology (including hall cameras and walkie-talkies) to hide his band practices at school. He also sneaks his students out of class, loads them into his rickety van and transports them to an audition.

When a student tells the principal that she’s “the man,” she wrongly takes it as a compliment. Dewey is seen urinating (back view).

For a PG-13 movie, School of Rock throttles back considerably. There’s a pleasant absence of s-words and f-words. No one winds up in the sack here. There’s no gun play. No blood. No gore. Still, this isn’t quite what family audiences are looking for. Crude humor and an overall premise that good kids are better with a cocky, rock-god attitude don’t exactly inspire deep affection.

Actor/musician Jack Black is in his element as the slovenly guitarist-turned-educator. He’s actually part of the band Tenacious D, so the music comes naturally. So do his impish schmoozing and the way his maniacal eyebrows dive devilishly toward his nose. When Black is building his pupils’ self-esteem, School of Rock rocks. But their education includes lessons in rebellion and belting out profane lyrics. So this ends up an off-key cross between Mr. Holland’s Opus and The Bad News Bears. [Spoiler Warning] For viewers thinking Dewey might come around at the end, change his ways and become something more than an immature rocker, they’ll be disappointed. School of Rock is more Rebellion 101 than it is Rock 101. And that’ll have a lot of families playing hooky.