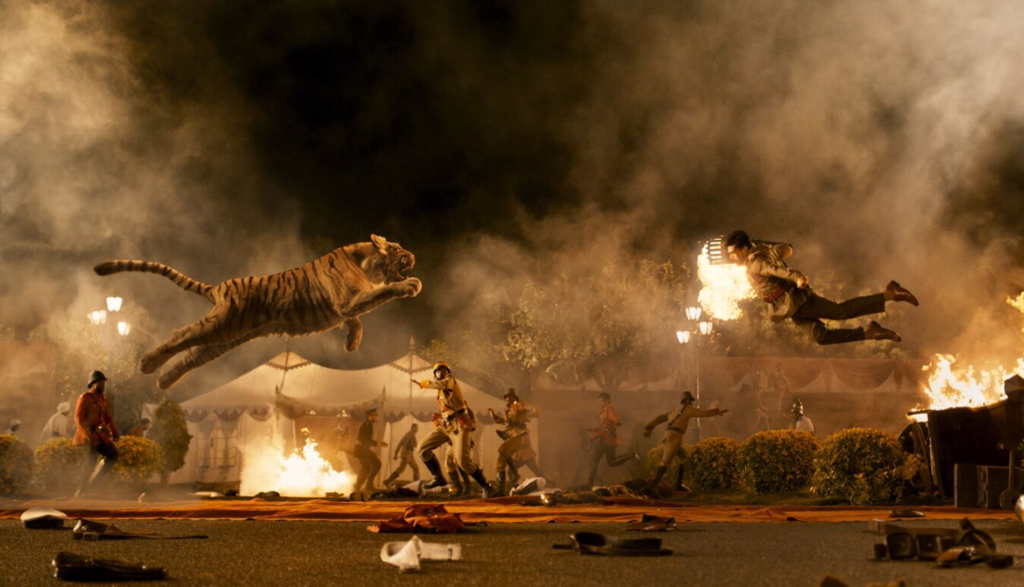 During the waning days of British rule on the Indian subcontinent in 1920, a particularly wicked British woman listens to a young girl sing in her native tongue. It’s quite lovely, the woman thinks. In fact, she’d like to take the girl home with her. The woman is, after all, the wife of the particularly wicked Governor Scott.

“I want to have this little package on our mantelpiece,” the woman says, prompting her assistant to throw a couple coins to the girl’s mother, Loki, as payment. But Loki doesn’t speak English, and she’s told that they’re paying her as appreciation for the girl’s song. When the British entourage takes the crying girl away, Loki and the rest of her village are devastated. After all, what can they do to resist the British Crown?

As the Gond tribe, not much. They’re a peaceful people who won’t even raise a finger against oppression and who will mourn when even a young lamb goes missing. At least, that’s what the British are told. But the tribe also has a shepherd, a man who “protects the herd with his life” who will stop at nothing to bring the girl back home.

Well, one man doesn’t seem like much of a threat to the Empire, but a rebel is a rebel, they decide, putting out a request for a member of their police force to bring this unknown shepherd back—preferably alive. Whoever does so will get promoted to Special Officer.

That offer catches the attention of Alluri Sitarama Raju, an Indian man working within the colonial British police force. His desire for a promotion drives him forward with vigorous tenacity, stoking an unquenchable fire within his heart.

Following a harrowing rescue experience, Raju befriends Komaram Bheem, and he’s thankful to have such a good friend to lean on while he works the mysterious case. If only Raju knew that his new best friend was the very same shepherd he’s hunting.

Though their relationship is tested, Raju and Bheema develop a great brotherly friendship. At different points, both men must pause and think about whether that relationship is worth sacrificing in order to achieve their ultimate goals. The two stick up for one another, and Raju helps the more socially awkward Bheema talk to a woman he is interested in.

Bheem’s ultimate goal as his tribe’s shepherd is to recover young Loki from her British abductors. As we’ll definitely see, he fights many people and risks his life and well-being to save the child.

Raju, for his part, is an earnest and noble officer serving in the British army. He’s ambitious and works hard to earn a promotion that will grant him more authority to assist those fighting against the oppressive regime. We gradually notice the internal conflict he feels as he works.

The film suggests (and occasionally features) Hindu gods who empower their followers to do magnificent feats. Raju is often compared to Ram, a major Hindu deity; Raju’s fiancée, Sita, is compared to Ram’s wife of the same name.

Additionally, the name Bheema references Bhima, a man said to have been born when a wind god granted a son to a couple. A song chants facts about Ram and Bhima, and it references another Hindu god, too. People bow and pray at shrines. We hear reverent talk about the Godavari River.

Bheem uses a Muslim disguise. At one point, he puts his “holy thread” around a man to try to help heal him. Bheem also sings a song about being one with nature around him, saying that nature speaks to him. (And at an earlier point, Bheem called a tiger his “brother.”) Someone is said to have “appeared like a god.”

And, obviously, this Indian film is full of other visual and verbal references to that country’s dominant religion of Hinduism as well.

Raju and Bheem are both seen shirtless on a number of occasions. Bheem strikes up an unexpected romance with a British woman.

RRR’s action scenes are as ingenuitive as they are violent, and plenty of blood is shed. In one scene, Raju takes on a crowd of thousands of people, smacking countless men with his baton—and we hear the sound of bones breaking. People fall down a rocky cliffside. A man’s head is hit with a rock, and a woman is hit by a car and bashed across the face by a soldier wielding part of a tree branch. A man’s arm is twisted until a snapping sound is heard.

Animal attacks are frequent in the film, too. A man gets slashed a couple times by a tiger, the claw marks evident on his skin. Another unfortunate is bitten by a snake. One particularly intense scene involves a variety of dangerous animals, including tigers, wolves and jaguars, mauling a large group of people. One man’s arm is impaled on an elk’s antler.

We also see the violence that results in clashes between the British officials and the Indian protestors. A British officer beats a man for embarrassing him. Countless men on both sides of the conflict are shot and killed, and one man’s finger is shot off, leaving a bloody stump. A young child is also shot and killed. A man is beaten to death offscreen with a sledgehammer. Another man is stabbed in the chest by someone wielding a few bullets like Wolverine’s claws. One prominent Indian protestor is publicly flogged with a spiked whip, and the blood loss is evident. We see a man beginning to bite into another’s throat, and a woman who claws a man’s face with her nails. A woman is kicked in the stomach. A suicide bomber explodes, killing a group of soldiers. Plenty other combatants perish via arrows, explosions and other means.

Soldiers catch on fire and burn. Someone is partially impaled on a tree branch. Raju punches a wall until his knuckles bleed. People are crushed by a careening car. Someone is tortured; their fingers are broken, and they are beaten with a stick. A train car explodes. We see a pile of freshly hunted bucks.

The profanities listed here are in the film’s subtitles: “B–tard” is used eight times, “d–n” is used five times and “h—” is used four times. God’s name is abused seven times. Additionally, “bloody,” “bugger” and “wanker” are all used, too. A man calls someone a “chit of a girl.”

A man drinks a glass of alcohol. Another man smokes.

Pretty much every British person (save the female love interest) is racist and prejudiced toward Indian people. Raju pops a woman’s car tires with nails in order to help Bheem talk to her. A woman “buys” (essentially kidnapping) a mother’s daughter against the mother’s wishes. Bheem pours blood on his head. We hear a few lines about not eating with the left hand (the hand used for cleaning yourself after defecating in some places in the world).

The two protagonists are based on real-life revolutionaries who never met. The film is entirely fabricated to “show what could have happened in their lives and what would have happened if they met and bonded,” according to director S.S. Rajamouli. That romanticized depiction could potentially lead to misunderstandings about the two historical figures.

Have you been hurt by action movies that end up being more movie than action? Well, that’s all about to change.

RRR, which stands for Rise, Roar, Revolt, is a 2022 Indian release on Netflix. Its two protagonists see plenty of combat by the film’s conclusion—and much of the action sequences are novel and almost comically epic. A man sliding on his knees under a pouncing tiger? Sure. Another man jumping alone into a crowd of a million angry protestors to fight his way to arrest a man? Why not?

And though the half-dozen multi-minute action scenes spread throughout the three-hour timeframe are ingenious in their performance and framing, there’s quite a bit of violence to be had as people are shot, mauled or otherwise injured and killed—all with anywhere from nonexistent to large amounts of blood pouring from their wounds. There’s also a significant amount of Hindu spiritualism present within the film. On the positive side, we’ll also get to watch what may be the best male friendship ever to grace a movie screen.

No, RRR doesn’t reference the rating of the film. But at times, the violence comes close to gaining an R rating in this PG-13 action epic. Think of your action in your average Marvel movie, but with more fight scenes, and the characters more realistically bleed and break bones. There’s a lot that we could summarize here, but for a full description of the film’s rougher edges, make sure to read our “Violent Content” section.

Did I mention it’s a musical, too? As well as the most expensive Indian movie ever made with a budget north of $100 million? Any way you look at it, RRR is a big story. But as we’ve noted here, it comes with some equally big caveats, too.