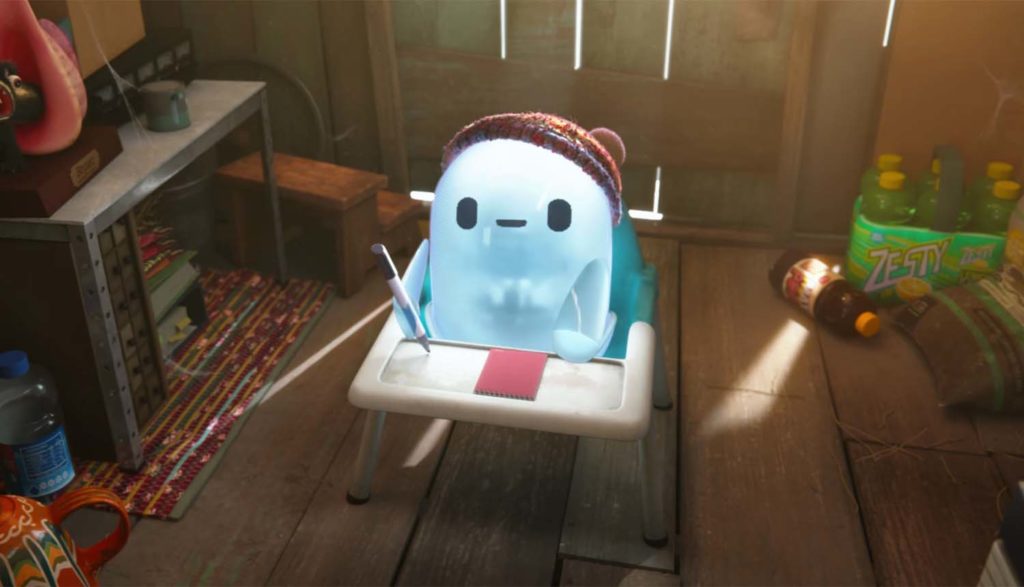 Barney Pudowski isn’t the most popular middle-schooler in the little town of Nonsuch. He could be called the most awkward, or the kid voted to most-likely be sitting all alone in a school photo. But popular? Nah.

So when the tech giant known as Bubble released its new internet-connected robot, the B*Bot, just before Barney’s birthday, it seemed like perfect timing. The B*Bots are promoted as a cool device that downloads an owner’s social media data and connects them with like-minded online friends. But wait … that’s not all! It can be a best-friend-AI sidekick all on it’s own, too.

As far as Barney is concerned, birthdays were made for this kind of stuff. And since nearly every other kid at school has already preordered a B*Bot, Barney figures he’ll be on the friend fast-track to joining the in-crowd once he gets his.

Problem is, Barney’s quirky, always-working dad and his Eastern European grandmother, Donka—his loving family members—didn’t get the B*Bot memo. Donka made him a hand-knitted cap and Dad got him a rock-excavation kit.

No popularity points there.

But Dad and Donka aren’t totally oblivious. After realizing what Barney desperately hoped for, they go straight out and … find that the B*Bots are all sold out.

Fortunately Donka draws from her checkered past and makes a back-alley deal for just the thing they’re after. Sure, it cost all her funeral money. And it was just slightly damaged after falling off the back of a delivery truck. But Barney now has his very own B*Bot.

Barney is, of course, thrilled. OK, the B*Bot, that Barney names Ron, is admittedly a malfunctioning mess. I wears Barney’s underwear on it’s head and can’t connect to the Bubble site and download necessary programs and safety precautions. But it’s Barney’s damaged and slightly dangerous underwear-donning bot. And, well, he feels a little damaged sometimes, too.

He’ll make it work. That’s what friendship is all about.

This pic focuses on the idea of forming friendships in a social media-dominated world. And though it doesn’t give any great advice about what it takes to make friends, it does speak of listening to others and doing your best to care about their needs. That works out a bit oddly at times with Barney’s “friend” Ron, because the B*Bot has a damaged, faulty program, but it eventually helps Barney reclaim a few friendships from his past.

Barney’s dad and grandmother are both loving parental figures, even though they’re a bit out of step with Barney and the world he lives in. [Spoiler Warning] Ron saves Barney’s life with the last of his power. Barney’s former friends turn from being bullies to defending him.

Donka suggests that one of Barney’s uncles was possibly possessed. “But I think it was a nut allergy,” she goes on.

We hear a sarcastic reference to the apocalypse. (More on that in Violent Content.)

After Ron realizes that his job is to make friends for Barney (but he can’t, since he’s unable to connect to social media), he starts inviting people via printed invites and pictures. He approaches a woman holding a picture of Barney as a child and says, “Will you come to my secret shed and Like him?” (She declines the invitation.)

When the B*Bots are first introduced, the robots’ programmer declares that the bots have “incredible safety features to keep your parents happy.” But the damaged Ron never downloads those safety programs and can do whatever dangerous thing he chooses. So, when bullies hit Ron, he hits back. Ron pummels bully kids and sends them flying around the playground. And Barney heartily approves. “That was awesome … and terrible.”

Of course, when other B*Bot owners see this, they figure out how to use Ron’s program to break the safety protocols on their bots. Soon after, kids are riding their robots around at reckless speeds and bashing into things. As the bots smash the scenery and each other, a young girl notes, “It’s basically the apocalypse, but kinda fun.”

Ron is taken back to Bubble, and the company officials decide to have him crushed. Ron escapes, but another B*Bot gets smashed by large crushers. Elsewhere, Barney falls down a long concrete shaft and barely misses the whirling fan blades at the bottom of the shaft.

Donka tries to make a deal for a B*Bot. She points to her pet goat and says, “I throw in goat, and when you get tired of this one …” (She then indicates that the animal can be killed and eaten.) Donka also tells someone, “Once I mend my own hernia with bread knife and vodka.” A Bubble exec is willing to let someone die in order to protect the company’s reputation (though no one is ultimately injured).

Kids refer to “Hell” (the place) twice. And there are one or two exclamations each of “oh my god,” “oh my gosh” and “freakin.” A bully teasingly says, “I can see it’s ro-butt!”

At one point it appears that Ron has lured a biker to be friends with Barney through the use of alcoholic beverages. But it turns out to be non-diet cola.

A girl’s B*Bot decides that two friends shouldn’t remain friends because their social media data doesn’t match up well. A teacher tries to draw buddies for the friendless Barney, but only makes him the recipient of further bullying. Bullies tease Barney mercilessly for being friendless on his birthday.

After Bubble announces selling 100,000,000 B*Bot units, a company exec talks about all the kid users and brags, “We’ve finally done it! We’ve eliminated sleep.” There are several instances of toilet humor involving bird poop. Ron kidnaps a baby to be Barney’s friend.

A girl is symbolically swallowed by a collected group of B*Bots (that now look like one giant bot) and then squirted out the other end of the group. She looks up and cries “It pooped me!” A video of that event goes viral, and she becomes “Poop Girl,” much to her tearful shame.

A Bubble exec named Andrew repeatedly talks about the ways the bots can spy on their owners and be used to fulfill the company’s greedy wishes. He declares that he hates kids and simply wants them to “stick to their screens.”

This film about a malfunctioning robot has a few of its own wires crossed.

On the one hand, it’s got a cute premise. Who wouldn’t like the idea of a personal robo-pal—voiced by a comedy star known for his improv chops—going a bit whacky? That’s gotta lead to hilarity ensuing, right?

Well … not so much. Things are silly, for sure, but endearing friend moments and hearty chuckles are kinda scarce.

Then there’s the message in the mix. There are some solid warnings peppered throughout the story alluding that big tech companies behind super-duper, fancy social media devices might not always be your friend. In fact, the movie suggests that they could be watching everything you do in order to simply sell you stuff. On top of that, social media can be less friendly than you think, we’re told. And if handled poorly, meanies online will leave you in tears.

Those are definitely important warnings about tech and social media that kids and parents should all be thinking about. But Ron’s Gone Wrong doesn’t quite know how to follow through on the wrongs it gets right. It refuses to suggest any useful steps forward, really. Instead, attempting to find a wobbly balance point where everything and everybody just gets along. It doesn’t all compute when you stop to think about it.

That’s not to say that kids will notice. They’ll likely just be there for the goofy robot silliness. (And there’s plenty of that … along with some gags that may have parents shaking their heads a bit, too.) But if parents want the lessons to become part of their kid’s code, they’ll need to do a bit more work than they may have planned on.