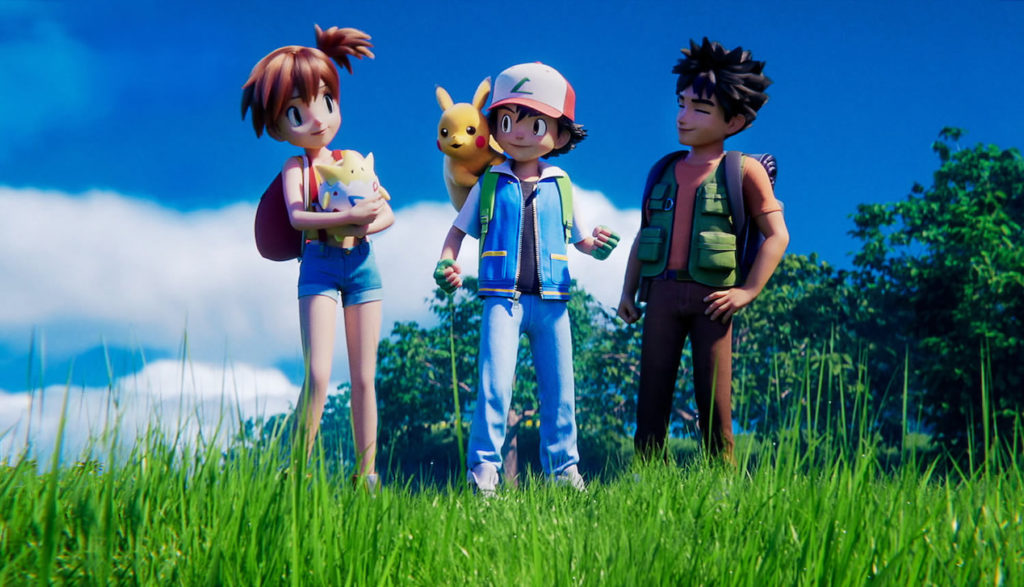 In the alternate reality where a kid named Ash lives, humanity shares its world with special, magical critters called Pokémon. In this world, men, women and kids with the right temperament, the right patience and goodness of heart, can even develop close relationships with these incredible creatures. And if they work hard enough and care strongly enough for their Pokémon, those human Pokémon trainers can someday become Pokémon masters.

That’s certainly something Ash aspires to. He works hard—with his electric-zapping Pikachu and others—to be the most loving and balanced Pokémon trainer he can be.

There are some in this world of men and Poké monsters, however, who aren’t so caring and empathic. These people seek only power, no matter the cost to the creatures that make it possible. And let’s face it, if you can harness the ability of some of the most potent Poké, you can wield great power indeed.

In fact, there are legends whispered about a very, very powerful Pokémon, the most powerful Pokémon ever known: a creature called Mew. It’s said this Poké controls the forces of nature itself. It can raise a tornado from a slight breeze, create a tsunami from a gentle wave.

Most believe that this astounding creature is extinct: gone forever. However, after many expeditions into the farthest, most forbidding corners of the world, a group of scientists find a few fossilized hairs that very well may have belonged to this powerful monster. Now all they have to do it take those DNA-laden bits back to a lab and create a cloned version of what they’ve sought for so long.

But something happens in the cloning process: The scientists create a creature with some of Mew’s legendary attributes but with some new powerful wrinkles of its own. They call it Mewtwo.

But what if Mewtwo doesn’t want to take orders from anyone? What if he wakes up in his lab enclosure and wants to know who and what he is? What if this superpowered being longs for purpose and identity of his own? What if he hates the idea of being stirred up in a test tube and created to serve as a slave to mankind?

What if this incredibly formidable entity is willing to use its massive power—the forces of nature itself—to lash out against his makers, his “masters?” What happens then?

The film makes it clear that the most effective Pokémon trainers, those like Ash, are the people who care for and love their Poké monsters dearly. Ash is pummeled and thumped in that pursuit and even is willing to sacrifice his life in an effort to protect his Pokémon charges.

In turn, Pikachu and his other Poké love him back. In fact, even cloned Pokémon—creatures created specifically by Mewtwo to fight against men and their Poké friends—are swayed by Ash’s love and earnest sacrifice. (If nothing else, this could easily be interpreted as an encouragement for kids to treat animal charges kindly.)

It’s stated that in Pokéman and humans alike, real strength comes from the heart. And ultimately even Mewtwo admits, “It is what you do with the gift of life that determines who you are.” And when Ash asks Mewtwo where he will go (after their conflict is resolved), Mewtwo replies, “Where my heart can learn what yours knows so well.”

Scientists state at the beginning of the film that “In this world, only two things can create life: nature and human science.” But soon after they create the cloned Mewtwo, it’s made plain that there’s more to life than simple existence.

As soon as he wakes, the newly cloned Mewtwo begins wondering: “Who am I?” “For what purpose was I created?” “Who asked for me to be created?” “For what reason do I live?” The scientists have no answers for him except to suggest that he was made to serve men. And so Mewtwo eventually sets off to destroy the things he can’t grasp, including the men who created him.

Mewtwo controls one human woman with a telepathic power.

[Spoiler Warning] While trying to stop a destructive battle and protect those he cares about, Ash is hit with a powerful blast and turned to stone. The watching Pokémon are all so moved that they openly cry. And their magical tears restore him.

Ash’s friend Brock is repeatedly enamored with the pretty women around him, such as the lovely Nurse Joy. He makes comedic attempts to flirt that generally fall flat.

Early on as Mewtwo wonders about his purpose, a powerful man in charge declares that it’s to do “what everyone else in this world does: create destruction, war and conquest.” Mewtwo isn’t open to the idea of being used by humans as a weapon, so he unleashes his power against them. “Humans are a dangerous species!” the powerful monster declares. He destroys a scientific lab, stirs up a huge hurricane and creates chaos in a variety of other ways.

Part of Mewtwo’s plan involves kidnapping a large number of trained Pokémon and creating “evil” clones of them. We see the Poké slash and bash each other in battles that include powerful blasts of energy, huge bellows of blazing fire and large torrents of water. (There are some perilous situations here, but nothing really scary for younger kids.) Eventually, all of the original and cloned Pokémon fight until they are so tired they can barely move. Some even pass out from exhaustion.

Human trainers are tossed around by Mewtwo as well. Those youthful trainers barely escape drowning in an enormous storm at sea, and one is turned into a chunk of solidified carbon. Of all the humans, Ash is the one who gets thumped around the most. But he readily springs back for more.

The devious Jessie, James and Meowth of Team Rocket lie and sneak around trying to get in on the Mewtwo action. But they actually only get thumped around for their efforts.

Stalwart fans of everything Pokémon will already know that this Netflix-presented film is a 3-DCG remake of the very first Pokémon movie to hit theaters back in 1999, suitably titled Pokémon The First Movie. For some, Mewtwo Strikes Back—Evolution will feel extraordinarily nostalgic. Others (read: non-fan parents) will likely be thinking … Meh.

And frankly, that kind of shoulder shrug seems sort of appropriate when it comes to the 3-D animation in the mix here. This pic’s new coat of cinematic spackle and paint can feel a few generations old in the face of some of the newest pizazz presented recently in the animation world.

That said, this shot-by-shot remake still contains all the Poké charm, tearful conclusion and thoughtful introspection of the first film. In fact, if you’re looking closely at this story of cloned Pokémon and Poké battles, you’ll find a movie that raises the idea of self-awareness and metaphorical questions about the purpose of war. And it lightly addresses mankind’s sometimes destructive choices in the name of scientific advancement. Parents of faith can even find talking points here about creation and the folly of man trying to dominate that which is not his to control.

Yep, Ash and his Poké pals talk about all that.

It all depends on who’s watching and how deeply they want to think into the magical critter struggles on screen.

If nothing else Pokémon: Mewtwo Strikes Back—Evolution is a relatively fun kid pic about bravery and friendship. It can be a bit goofy at times. And it features battling creatures that lash, zap and fire-breathe their way right to the edge of peril. Or in other words, it’s all pretty typical Pokémon stuff.