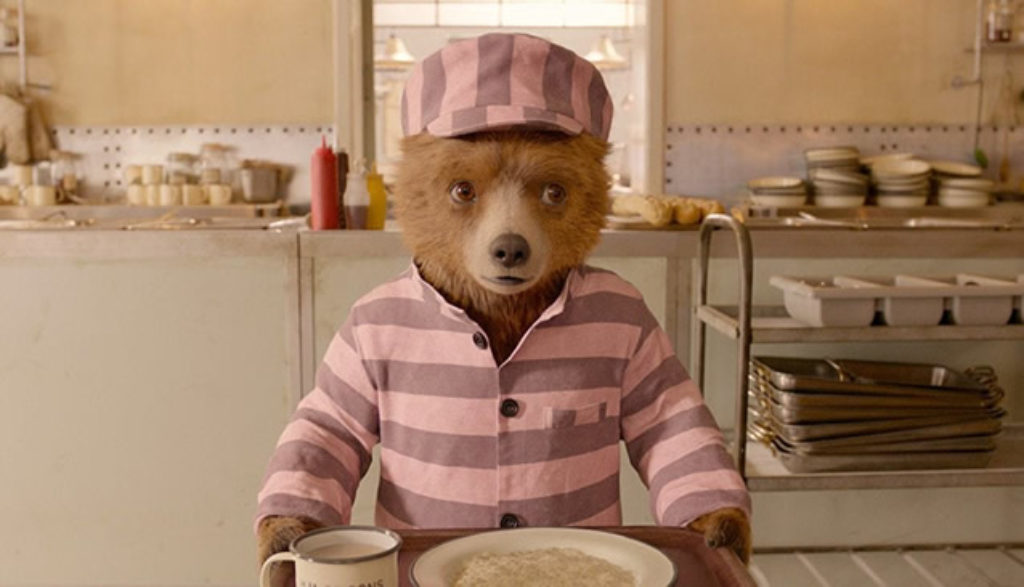 Rescued from the dangers of the Peruvian forest by Aunt Lucy and Uncle Pastuzo, this rather small and sneezy bear was always destined to do big things.

So much so that Aunt Lucy knew the forests of Peru wouldn’t be able to offer him much. So, she sent him to London—a city filled with as much adventure and heart as Paddington himself.
And he’s taken up residence with the warmest family in Windsor Gardens: the Browns.

Mr. Brown is the businessman, Mrs. Brown is the eccentric artist and writer, Mrs. Bird is … well, she’s Mrs. Bird. Teen son Jonathan is now known as J-Dawg. And his sister, Judy, has channeled the disappointment of a recent heartbreak into a budding interest in investigative journalism. For all their individual personality quirks, though, each of these family members (as well as most of the other residents in their neighborhood) have one important thing in common: They love Paddington.

Paddington loves them too, and he sure loves his aunt Lucy. Which is why for her 100th birthday he works extra hard—washing dogs, washing windows and trying his paw as a barber—to send her a beautiful pop-up book detailing the place she’s always wished to visit: London.

But Paddington isn’t the only one who’s interested in this very expensive gem lodged away in old Mr. Gruber’s antique shop. A formerly famous actor by the name of Phoenix Buchanan is also curious … and he’ll do just about anything, or disguise himself as just about anyone, to get his hands on that colorful book.

In the end, mailing something as simple as a pop-up book to Paddington’s beloved aunt turns into another wild and wooly adventure—including a stint in prison for a crime he didn’t commit—for the courageous little bear with the red hat.

And for the family that loves him dearly.

Paddington has always been loveable, ever since he came on the scene in 1958. He makes everyone around him a little happier, a little kinder and even a little smiley-er. Always thinking of others before himself, Paddington whips up a mean marmalade sandwich for hungry prisoners (as well anyone else who may be hungry), he “looks for the good in all of us,” and he’s unfailingly polite—even to the bad guys. Because, as Aunt Lucy would say, “If we’re kind and polite, the world will be right.”

The thing is, it’s virtually impossible not to love Paddington. He makes everyone around him feel loved and cared for, even when he himself is not. He never wallows in self-pity. He’s fiercely loyal to his friends and loved ones, and he can turn even the most terrible situations (such as being falsely accused and unjustly imprisoned) into wonderful opportunities to show others their matchless self-worth. The long list of people Paddington’s irrepressible optimism impacts includes not only the Browns and many neighbors in his Windsor Gardens neighborhood, but even the hardened criminals he encounters in the clink.

That’s why his family and friends will do almost anything to rescue the beloved bear from the dubious plottings of Phoenix Buchanan.

Someone crosses himself. Phoenix dresses up as a nun, as well as a priest, all the while destroying a statue within a cathedral. We see a statue of an angel at a carnival. A fortune teller explains the historical significance of her grandmother’s pop-up book to the Brown family. (No fortunes are ever actually told, however.) Buchanan refers to himself as a “handsome devil.”

Someone says, “thank … the ghosts.” Mr. Brown goes to a yoga class during a mid-life crisis of sorts. While there, we hear the phrase “open your mind and your legs will follow.” We later see Mr. Brown with his legs stretched out in a ridiculous situation, his face calm and his palms together in an obviously meditative pose.

A woman is shown wearing a sports bra and yoga pants. Mrs. Brown dons a swimwear bodysuit that covers her completely. The pop-up book includes circus characters in tight-fitting clothing. The female angel statue referenced above (and visible a couple of times) wears a skimpy outfit.

A single man and woman who live in Paddington’s neighborhood strike up a romance. Late in the movie, we see them both looking out of window together in the morning, implying that they’ve spent the night together.

Phoenix, while dressed in a disguise as a nun, is described by a male security guard as an “unusually attractive woman.” We also hear a repeated joke about how he has “really nice buns.”

An ensemble dance scene in the closing credits goes for laughs—in a nod to the likes of Mel Brooks and Red Skelton—by putting masculine prisoners in pink outfits and having them do a rather dainty performance together.

A lengthy chase scene involving two trains includes various characters moving between cars, sometimes on the train’s roof, once on a ladder extended between the two trains. Close encounters with tunnels require hasty ducking. One train car ends up detached and crashes off a bridge into a river, necessitating the daring (and mildly tense) rescue of a character trapped inside. Elsewhere, there’s a bicycle chase as well that includes some mild pratfalls.

The fortune-teller’s grandmother is murdered (though we only see her lying still on the ground in a flashback). We also hear that Paddington’s uncle has passed away.

A prisoner named Nuckles, who serves as the penitentiary’s cook, deftly uses a knife to cut up an orange. He tells Paddington that the bear “doesn’t want to know” how he became so good at using it. He also throws a sack of oranges on Paddington’s face.

Various inmates threaten and verbally intimidate Paddington as he tries to make prison a better place, telling him to keep his head down. Someone says he’ll bury him “in a very deep hole” if he doesn’t.

And Mrs. Bird uses a toy gun (with plastic darts) against Phoenix’s real sword. We see some mild scuffling between characters. Phoenix says on the witness stand, “May my entrails be plucked out and wrapped around my neck” if he’s lying (which, of course, he is).

We hear a single use of “oh my god.” Someone quips sarcastically, “Screw your courage.” Name-calling (generally played for humor) includes phrases such as “mushy brained,” “bearded baboon,” “maggot,” “yellowbellies” and “weirdo.”

Champagne is served on a train ride.

When Paddington embarks on his job hunt, Judy tells him he “can’t trust anyone.” Mrs. Bird refers to actors as “evil, devious people … who lie for a living.” Phoenix eats dog food in a commercial he’s done. Paddington uses his furry rear to clean a few windows, and he uses an electric toothbrush to clean out his ears.

Paddington is convicted of stealing the book that he’s long been working to purchase. He’s harshly sentenced to 10 years in a sad, lonely prison after that supposed burglary. He’s worried (thanks in part to other prisoner’s pessimistic influence) that the Browns might forget him in prison. (They don’t. In fact, at one point, Mr. and Mrs. Brown break into Phoenix’s house looking for evidence to exonerate Paddington—a choice that’s well-intended in the context of the film but nonetheless illegal.)

Paddington seals a deal with Nuckles by spitting on him. And Nuckles refers to himself as never being able to “amount to anything.” Paddington and several prisoners escape from prison.

[Spoiler Warning] Those convicts convince Paddington that their motivation for the breakout is to help him find the person who framed him for stealing the book; in reality, though, they are just using Paddington in order to make their break. Nuckles and two other friends appear to abandon Paddington once he’s served their selfish purposes.

Have you ever met someone who always changes his or her environment for the better? Paddington certainly does. No matter how harsh the conditions may be, how mean the words sound or how bad the bad guys’ intentions, Paddington always asks simply, “What would Aunt Lucy do?” And that one little reflection has the potential to transform even the most dire of situations into a jolly good time, because Aunt Lucy always does the right thing—even when others might choose the wrong thing.

It’s a way of life that Paddington uses to guide his own choices. And, looked at from a certain perspective, Paddington’s decision-making process is not that far removed from asking the question, “What would Jesus do?” It allows the little bear to step back, analyze the situation and make the very best decision possible when he ponders what his beloved role-model would do.

Isn’t it just like Paddington to ask such a thoughtful question, all the while leaving those of us watching his latest adventure with a deeper sense of hope, wonder and optimism. With the exception of a few very minor missteps, Paddington 2 is just about as cuddly—and surprisingly inspiring—a sequel as you could hope to find.