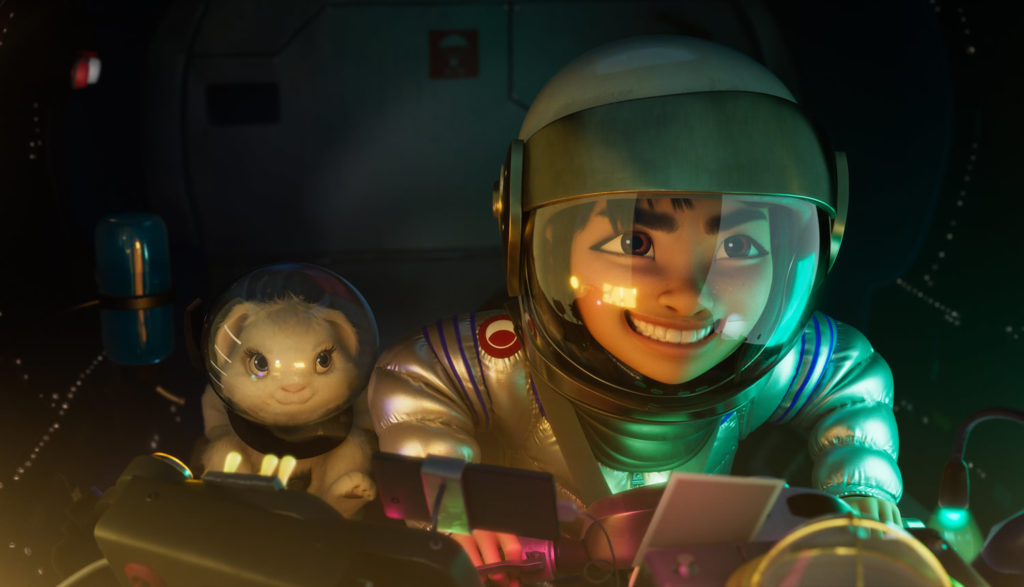 The Man in the Moon? Forget it. According to Chinese legend, the moon’s most famous inhabitant is a woman.

Her name is Chang’e, and she moved into her lunar abode a long time ago, when she became immortal. She’s a goddess now, so you think she’d be happy: Not every girl can claim to be a goddess, as well as being immortal and owning 14.6 million square miles of planetoid.

Still, Chang’e pines for her beloved beau, the brave-and-mortal-and-now-quite-dead archer Hou Yi. Initially, they both had pills of immortality to swallow. But when Hou Yi’s apprentice sought to steal one, Chang’e stashed them both in her mouth for safekeeping and … well, suffice to say Hou Yi never got his pill. And while there are those who say that Chang’e simply wanted both pills for herself, most folks believe that the moon goddess is a tragic figure, eternally pining for her husband.

When she was very young, her mother filled her mind with stories of the moon. And when Fei Fei’s father would ask if the girl wanted to the hear about the science behind the moon, well, Fei Fei and her mother would just laugh him off. The beloved ancient myths were all the explanation that Fei Fei wanted.

Those stories grew even more precious to the girl when her own mother died. Looking at the moon, where the longsuffering Chang’e lived, Fei Fei would think of her mother.

But while immortal goddesses may have license to grieve forever, life down on earth moves on. Years later, Fei Fei’s father meets another woman, Mrs. Zhong.

Oh, Mrs. Zhong seems nice enough. But she makes mooncakes (a staple delicacy served during the moon-centric Chinese Mid-Autumn Festival) all wrong. She has a brat of a son, Chin, who loves ping pong and hangs upside down and tries to run straight through walls. And worst of all, Mrs. Zhong seems determined to take Fei Fei’s mother’s place—in the house, at the dinner table and in her father’s heart.

Has Fei Fei’s father forgotten her mother? Has he learned nothing from Chang’e, who eternally mourns her own lost love? Does he (gasp) not even believe in Chang’e anymore?

Well, clearly, Fei Fei knows the answer to her dilemma—a way to refocus her father’s attention on the woman he should be loving and send Mrs. Zhong away. Fei Fei just needs to prove that Chang’e is real. No sweat. After all, how hard could building a spaceship and flying to the moon be?

Underneath Over the Moon’s fantastical story lies a deeply resonant lesson: Sometimes, we all need to move on. And change—as much as we can hate it at times—is good.

“No moment is the same, and that’s wonderful,” says Gobi, one of Fei Fei’s unexpected helpmates on her strange, quixotic quest. “Every moment we have is a chance at something new.” We’re reminded, too, that the more love we give the more love we have to give, and that sometimes we need to move on.

The lesson is hooked firmly into the context of losing a loved one. But viewers might extend the lesson more broadly to changes we all—especially children—can be anxious about: Heading off to kindergarten or getting a new brother or sister or even getting on a plane can be upsetting for some. But change is always an opportunity for growth.

Over the Moon has no real villains (other than a trio of duplicitous biker chickens), and almost everyone in Fei Fei’s life—including her annoying would-be stepbrother, Chin—loves Fei Fei and wants what’s best for her. (Indeed, Chin shows a remarkable amount of loyalty to Fei Fei, given how little she seems to like him at first.) And if you want to dig even deeper, we see a bit of an echo of the Apostle Paul’s pride in the “thorn” in his flesh: sometimes in our weaknesses, we’re able to reach people we might not otherwise reach.

That questionable allusion to Paul aside (which was wholly interpolated by yours truly), this story is very much predicated on Chinese mythology.

Chang’e is repeatedly referred to as a goddess, but her nature seems to lie between, say, the Greek goddess Demeter and Santa Claus. Like Demeter, Chang’e seems to mythologically explain certain natural changes: Demeter’s grief set the tempo of the seasons in Greek mythology, while Chang’e’s grief has some bearing on what happens on the moon. When she weeps, the moon’s subjected to meteor showers, and when she’s deeply depressed the whole place tumbles into darkness.

As such, the story bears some resemblance to characters from America’s own tall tales, like Paul Bunyan or Pecos Bill. And that comparison is perhaps most apt: Most of the story’s characters treat Chang’e as a beloved folklore character, not a goddess to be worshiped. These people recount versions of her own legend and wistfully talk about her apparent loneliness without really believing she exists.

But Fei Fei believes in Chang’e, just like lots of kids believe in Santa. She doesn’t worship the goddess, per se, but she does think that her dad should pay closer attention to Chang’e’s eternal grief. And Fei Fei gets progressively more irked that her family seems to be filled with doubters.

White herons seem to take on a spiritual tang. And at one juncture, a heron seems to Fei Fei to be an avatar for either Chang’e or perhaps even her own mother. (They eye each other significantly, anyway.)

The moon is filled with fantastic creatures that likely were created somehow by Chang’e. (Her tears, for instance, seem to take on a slight sentience.) We see other mythological creatures as well, from a gigantic dog that (according to Chinese legend) takes bites out of the moon (thus accounting for the changes we see on earth) to gigantic red, flying lions.

An amulet seems to have magical powers. We see a picture of Fei Fei’s mother as the centerpiece of a makeshift shrine, and hear that people’s spirits are never far away even when they die. We’re told, in song, that there’s “magic” in the family’s mooncakes.

A rabbit tries to make an elixir of immortality. Practitioners of tai chi practice in a park. We hear a reference to yoga and to fighting off demons.

[Spoiler Warning] A spectral Hou Yi visits Chang’e, but vanishes into mist, telling his wife that he cannot stay.

Fei Fei’s father and Mrs. Zhong touch hands (a gesture of intimacy that Fei Fei finds deeply significant). It’s clear the two plan on marrying. The love story between Hou Yi and Chang’e is told and alluded to, and it’s clear that Chang’e still loves her dearly departed husband. Chang’e dons an outfit that showcases some animated leg. She also wears a tight garment that she plays ping-pong in.

The film does contain quite a bit of slapstick humor, but no one gets hurt. People and creatures sometimes fall from some pretty great heights. Gogi’s tongue serves as a lasso and tripping instrument. Meteorites fall from the Moon’s sky, causing some serious consternation amongst those dodging them. A rabbit has ears capable of blasting things. Elsewhere, though, we see Fei Fei’s mother stumble to the ground—the first sign of her illness.

Fei Fei’s spaceship prototypes crash quite a bit. And even her fully constructed contraption seems destined to crash disastrously to Earth before it’s rescued by a mysterious force.

Chin believes he has a talent for running through walls … but his definition of “through” is a little iffy. He sometimes runs headlong into a very sturdy obstruction and, of course, topples to the ground. But he says he can feel his molecules just beginning to penetrate the wall, and with a little practice, he just knows he’ll be able to drive straight through without damaging those walls.

None, though Fei Fei does call Chin a “dingbat” sometimes. Someone boasts that she’s going to kick everyone’s “butt” in mahjong.

We hear about Chang’e’s pills of immortality.

Fei Fei’s mother tells Fei Fei the legend of a gigantic dog that gobbles up bits of the moon, which explains its phases. When Fei Fei asks what happens when the moon grows, her mom says that’s when the dog is forced to upchuck everything it ate (accompanying it with a gagging motion).

Fei Fei brings along a pair of her grandfather’s diapers, explaining that it’s a “long flight.” (Later, a creature on the moon dons the diaper, thinking he’s dressed at the height of fashion. Another creature is disgusted by it and flings it away.)

Someone mimics the noise of flatulence.

Well, you can’t knock Over the Moon for its imagination.

This Chinese-American animated musical truly transports viewers to a dizzying, slightly delirious world: The moon, instead of being just a barren collection of dust and craters, becomes an ecstasy of color that Oz itself would envy. It’s a world filled with talking mooncakes, sentient blobs, gigantic flying toads and alchemic bunnies. Willie Wonka’s factory has nothing on this place. How, exactly, Fei Fei gets there is a little fuzzy, but no matter: Better to just roll with it.

It comes with a pretty great message, too. Change is hard, especially when you’re a kid. And when that change involves the death of someone close to you, it’s all the harder. That significant message gives this whimsical journey its symbolic anchor.

The film comes with many of the minor problems you’d expect from a PG cartoon: A dash of name-calling, a dollop of bathroom humor and plenty of slapstick humor. And honestly, most of those elements feel a little lighter than you’d find in some other PG films. Over the Moon wants to impress people with its story and eye-popping visuals, not its eye-rolling gags.

But Over the Moon’s high-profile “goddess” and Eastern mythological structure may give some parents additional pause. If you stayed away from the Marvel movies because of Thor, this is one you might skip, too. That said, Chang’e also provides a good template for parents to discuss the petty, fallible, “lowercase g” gods of legend and the God that truly deserves our worship.

Certainly, Over the Moon isn’t a film to rocket to without consideration. Still, in his reviewer’s eye, this Moon looks more than half full.