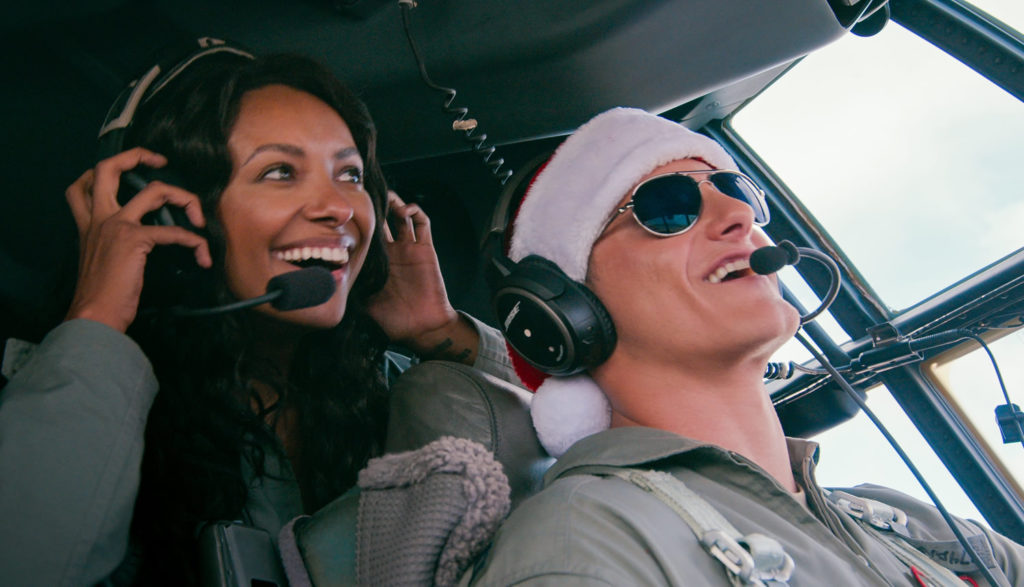 Every year since 1952, the United States Air Force has performed a “low altitude training exercise” out of Anderson Air Force Base in Guam known as Operation Christmas Drop.

And while this exercise does provide the airmen with valuable training, its actual focus is to supply the people living on remote Pacific islands with food, medicine, clothes, school supplies and even toys. But after a critical article makes it seem as if the operation is wasting valuable time and resources, a congresswoman sends her legislative aide, Erica, to investigate.

Upon her arrival at the base, Erica gets straight to work, looking for inefficiencies that could constitute a rationale to shut it down. After all, if she does a good job, there’s a good chance she’ll be promoted to the congresswoman’s chief of staff.

But Erica is waylaid by Andrew, an Air Force pilot stationed at the base who runs point on Operation Christmas Drop.

At first, Erica thinks Andrew is an egotistical flyboy somehow working an angle to serve himself. However, after working alongside him for a few days, she begins to see how the mission doesn’t just benefit the islanders. It also boosts morale for the airmen stationed half a world away from home on Christmas. She also learns that thanks to volunteers, donations and Andrew’s highly efficient allocation of resources the entire operation doesn’t cost American taxpayers a dime.

But now Erica has a choice to make. Does she purposely make the Air Force look bad in order to bolster her career, or does she find a way to convince the congresswoman that this humanitarian relief effort is just as vital as her constituents back home?

The efforts of Operation Christmas Drop bring joy to everyone involved, not just the islanders who receive the supplies. People donate the needed items and volunteer their time every year to help the mission succeed. And Andrew points out that for enlisted airmen spending Christmas away from home, possibly for the first time, the mission helps them see how they’re making a truly tangible difference in needy people’s lives.

Erica begins to understand this reality more deeply when she helps raise money for supplies and packs boxes for the drop. She tells Andrew that serving the islanders feels more impactful than anything she’s ever done at her job in Washington, D.C. Andrew notes that “service before self” is one of the core values of the Air Force, which is why they do it.

Helping others also reminds Erica of her mom, who died three years before; her mother also once said that the noblest thing a person could do was find a need and fill it. Erica also realizes that because she misses her mom, she’s been avoiding her new stepmom; so Erica decides to give her a chance.

Andrew says that he “pays it forward” because his family almost lost their farm growing up, but all their neighbors came together to help them out. Erica also sees that despite being an officer, Andrew never pulls strings to go home for Christmas because he’s the only one with the training required to run Operation Christmas Drop.

When the base doesn’t have sufficient housing for a family stationed there, Andrew gives up his officer’s quarters so they’ll have enough room. And even though he lives in a much smaller house now, he keeps boxes full of donations there throughout the year so that they won’t take up space around the base.

Despite being a movie about Christmas and even featuring some Christ-centered Christmas carols, Operation Christmas Drop doesn’t mention the real reason for the season: Christ’s birth.

However, the story does foster goodwill towards men with people selflessly giving their time, money and resources to help the islanders of the Pacific; and at its core, such self-sacrificial service is a distinctly Christian theme.

When a typhoon threatens to stop the operation from taking place, Erica encourages people to keep preparing for the drop anyway, hoping for a miracle. A local church has a food drive for the drop. Andrew mentions a few local superstitions. Someone talks about helping Santa.

Erica and Andrew kiss. Couples dance closely together at a party. Some guys flirt with a woman and later they leer at her and another woman. Women wear outfits showing some cleavage. Male and female islanders wear traditional clothing that reveals their stomachs. People wear bathing suits.

Erica thinks that Andrew is a ladies’ man but later learns that he doesn’t have time for romance since he is always helping people on the islands.

There are a few mentions of how Anderson Air Force Base is a strategic outpost in the event of a war.

We learn that many of the islands in the Guam region were devastated after a typhoon sweeps through, knocking out generators (their only source of electricity) and destroying homes.

We hear “d–n” twice. We also hear some mild substitutes, such as “shoot” and “heck.”

A few lies are told to deter Erica from doing her job. There are fake explosives on a beach to prevent tourists from entering the Air Force’s territory. Someone says the only demerit on Andrew’s record was because of a prank involving a possum and his commander’s car. A woman says she misses her car, but not her family. A rich man refuses to donate generators to people in need because they are “too expensive.”

Operation Christmas Drop is the type of movie that makes you want to snuggle up in a warm blanket with hot cocoa while the snow gently falls outside—which is ironic since the film is set in the tropics. But seriously, it’s a heartwarming tale.

We see people working half a world away from home—on Christmas no less—who are ready give up the little free time they have to help people in need. And it’s not because they’ve been “voluntold” or because fellow airmen are pressuring them to do so—actually, in Erica’s case, she’s pretty much being pressured to do the opposite. But they’re doing this out of the goodness of their hearts because it’s the right thing to do.

And I’d be lying if I said I didn’t shed some tears when these airmen finally make the drops to the islanders.

This Netflix romcom truly embraces the generous spirit of Christmas (even if it never clearly focuses on Jesus). But given that Operartion Christmas Drop successfully dodges most other negative content (barring a bit of language), it may be a holiday movie-watching treat for your family to consider.