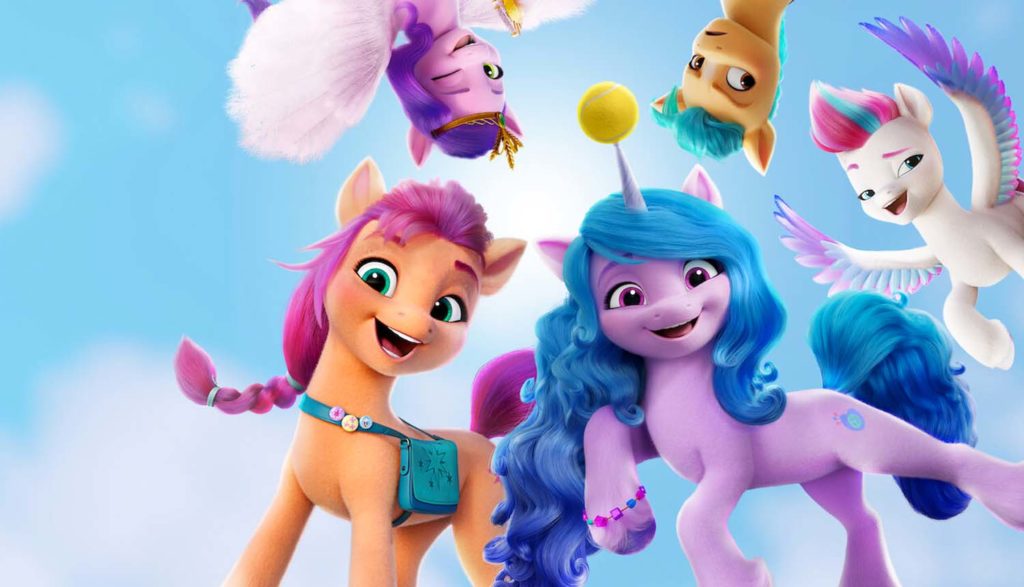 At one point in the past, Sunny Starscout and her dad, Argyle, were what you might call pony rebels. Or at least that’s how some of the other adult ponies in town saw them.

Argyle, a hornless, wingless “earth pony,” had always been at odds with the idea that pegasi and unicorns—the two other species of pony-like creatures in the world of Equestria—were nothing but arch-enemies and villains of the rest of ponydom.

Argyle thought at that time was that both groups were filled with evil magic and ready to zap or brainwash any normal pony they encountered. In fact, the popular image of a pegasus or a unicorn was so terrible that some ponies thought those two creatures might not really even exist.

But Argyle’s research showed that all of that—every frightened and hateful opinion—was completely false. Yes, they were magical, but he became convinced that in ancient Equestria their magic was used for good. And they all got along with regular ponies and promoted a unified front of friendship and community.

That’s what Argyle believed with all his heart, and so little Sunny believed it with all of her heart, too.

They just needed to prove that to the rest of the earth-pony community. “We’ll do our part, hoof to heart,” they pledged.

Years later, though, things haven’t really changed all that much. Argyle has passed on and Sunny is now a young adult pony. She’s still positive and she still tries every day to change some other pony minds, to no avail. To this day they all canter around in fear and spread all sorts of terrible falsehoods.

Then one day a cute young unicorn named Izzy saunters into town. That’s right, a unicorn! And while everyone else goes crazy with fear and runs screaming away, Sunny is the only one to step forward in awe.

Izzy doesn’t zap her with a magical horn. She doesn’t read Sunny’s mind or brainwash her into a zombie state. In fact, all Izzy does is say Hi with a beaming smile.

And Sunny realizes that they might just become friends.

Sunny and Izzy’s meeting is a long way from changing the minds of the entire world of Equestria. But it’s a start!

Unity and friendship is definitely the clarion call here. Sunny and Izzy take the initiative to go together to the land of the pegasi in hopes of finding proof that none of the pony species are magical, and gather evidence of a much more friendly past. And after meeting a pegasus princess named Zipp (and her social-media-influencer sister Pipp), the friendship pieces all start coming together.

At first this growing group of new friends believe that finding a new burst of communal magic will be key to changing everyone else’s mind about their mutual biases (the pegasi and unicorns have their own forms of prejudices about the two other species). But eventually they all discover that that can only happen when each group sees the possible kindness, friendship and truth with their own eyes.

“We can stay separated by fear and distrust or we can choose friendship,” Sunny calls out to a crowd. “We can choose love. That’s the true magic!”

Izzy eventually reveals that she was motivated to reach out to the earth ponies because of a message that Sunny and her dad sent out via a small balloon many years before (one small attempt to reach out made a difference even though they feared it never would).

There is magic in the pony tale. And that plays into both the bigotry and fear of disparate group as well as a healing element of continued hope at the movie’s end. The magic gives some ponies—including Sunny—the ability to fly.

There’s a definite attraction between Sunny and her childhood friend Hitch. He’s the pony community’s sheriff now and it’s clear that his feelings for Sunny motivate him to cut her more slack than he does for others. (But there’s never anything more between them.)

Sprout is another childhood friend of both Sunny and Hitch. He has always walked around in Hitch’s shadow. This hot-headed pony isn’t very bright or strong-willed and he’s not much of a natural leader, but when Hitch leaves town, Sprout is pushed by his mother to step up and take charge.

With time, Sprout stokes the fear of the pony masses and drives them to form a huge angry mob. “Millions can’t be wrong,” Sprout sings. “‘Specially when they’re screaming loudly.” He goes on to warble, “Well, it’s all gonna work out painlessly if you follow my orders brainlessly.”

That rabble destroys things in town and begins marching. Eventually Sprout declares himself Stallion-in-Chief and builds a robotic attack vehicle he plans to use against the other pony species or anyone else who questions him. That destructive device pummels residents, smashes scenery and rips apart Sunny’s lighthouse home before Sprout is stopped.

There are other scenes filled with panicked crowds and moments where Sunny and her friends are chased by groups of angry ponies. A number of Equestrians are lightly thumped about.

There’s an unfinished “what the…?” in the dialogue; a partially covered use of “geez” in a crowd scene; and several mentions of kicking someone’s “butt.”

Members of the royal family in the home city of the Pegasi lie to their citizens and manipulate them in order to retain power. People in power use the crowd’s fear and anger as a tool to control them. The things one species of ponies says about the other species can sometimes be a little rude. Pegasi, for instance, are raised to believe that Earth ponies are lazy, dumb and smell.

Historian and famed documentary filmmaker Ken Burns recently said that he views our current level of discontent, disunity and strife in America as being comparable to the country’s three great crises of the past: the Civil War, the Great Depression, and the Second World War. There are many who agree, but few who’ll stand up and earnestly suggest any solutions.

So, it’s ironic, in a way, that a kid’s movie about disparate groups of ponies does such a good job addressing the problem.

My Little Pony: A New Generation is quite simply a sweet little film filled with bouncy musical tunes, delightfully cute characters and truly funny moments. It frowns at stoked fear and mobs in the street. It sneers at lies and disinformation in the public square. And it vociferously neighs at bigotry and nasty choices on all sides.

But more importantly, this little pic smiles and cheers for forgiveness and friendship for all: two things we are all kind of in desperate need of these days.

Sure, kid viewers probably won’t see much more than a fun movie about ponies becoming pals. They’ll see something they can watch over and over and sing along with. And that’s just dandy. Because maybe by the time they watch it a dozen times or so those good lessons will stick.

And the next generation of grownups might have learned to make better choices from a New Generation of little ponies.