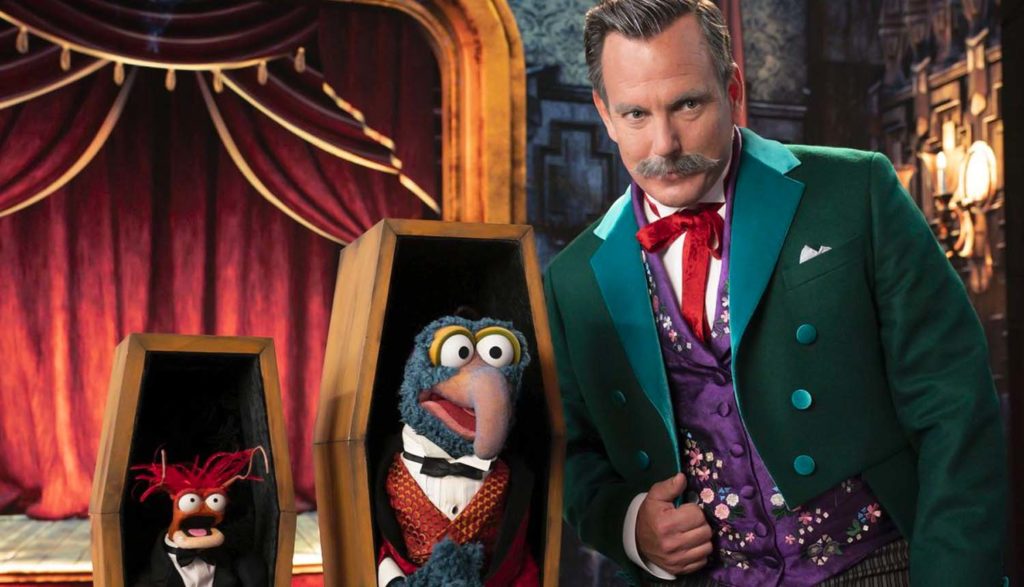 The Great Gonzo has never been afraid of a challenge.

He’s been shot out of cannons, ridden roughshod on rockets, even gone skydiving without a parachute. So when he learned that he had the chance to participate in a “once-in-a-lifetime fear challenge”—to spend the night in the world’s most haunted mansion—he couldn’t pass that up. Not even if it means skipping the Muppets’ annual Halloween party.

So Gonzo and his good pal, Pepe the Prawn, hop into a waiting limosuine and speed off to this macabre mansion to see what all the fearsome fuss is about. Gonzo frames the night as the biggest challenge of his career. Pepe sees the outing as a chance to impress the ladies and snag a sweet swag bag of excellent parting gifts.

But perhaps there’s more to this challenge than meets the floating eye.

The house is indeed haunted, you see. More than 999 spectres stalk its halls and fill its rooms. But even ghosts can use a little new blood now and then. And while you’d think the mansion would be filled to the rafters with them already, seems there’s always room for one more.

Muppets Haunted Mansion doesn’t seem like it’s aiming to communicate a lot of deathless truths or spirited morals. But Gonzo does learn something about his own fears here, and he finds that he must face them.

Could it be that Gonzo might be a little scared of his own self-worth? Many a psychologist might point out that most well-adjusted puppets do not affix the word “Great” to their names, after all. Kermit tries to tell him so at the show’s very outset: “You don’t have to be The Great Gonzo to be great, Gonzo,” the wise amphibian tells him.

Gonzo discovers as much (though he’s likely to forget by the next Disney+ special). And he performs an act of great courage eventually.

Spiritual content, you say? Never was a content subheading so apt. The contents of the mansion are filled with spirits.

We see oodles of the 999 spectral squatters and hear passing references to the afterlife. Gauzey the Housebox Bear (an undead version of Fozzy the Bear, of course) performs at the mansion, telling his audience, “Usually I’m worried about dying up here, but it looks like you beat me to it!” This is, naturally, to be expected. But the show does offer a few slightly darker and more cautionary turns.

Anyone who’s been through Disney’s Haunted Mansion ride is well aware of Madame Leota, the disembodied medium who chants various creepy phrases from the inside of a crystal ball. There’s a version of Leota here who repeats those phrases (“Awaken the spirits with your tambourine!” she says), and someone mentions that the medium is obviously leading a “séance.” We hear that the spirits respond to visitors’ “sympathetic vibrations,” another pull straight from the Disney ride.

An especially fearsome room is labeled with “666,” and a quick scene depicts some fire-and-brimstone effects (along with some horned, slightly devilish-looking Muppets). Gauzey makes a joke about exorcism. A chauffer proclaims, “My Lord of Friday!” There’s also a near-wedding that takes place in front of an altar …

… with the wedding officiated by Uncle Deadly, who in recent Muppet incarnations has been gay. (His role here though, obviously, doesn’t include a lot of romance.)

At the Muppet Halloween party, Miss Piggy and Kermit dress up as each other (thus comically switching both gender and species, if that’s an issue for anyone). A portrait depicts someone in comical boxers. Pepe mentions that Gonzo is dating a chicken, and he sees himself as something of a ladies’ man. But when he enters the mansion, he falls in love and nearly marries.

The bride? It’s “The Bride,” of course, from the Haunted Mansion ride—a ghost wearing a wedding dress that apparently makes a habit of cutting the heads off her (many) grooms. We see the axe, and the bride (Constance Hatchaway, if you must know) mentions that one of her favorite pastimes is sharpening cutlery. The Muppet ghosts of her many late husbands appear, and some describe their fates (one says he was chopped up). The bride tells Pepe that she wants to “kill you with kindness, drown you with kisses.” “I could just eat you alive!” she says at another juncture.

We also hear plenty of references to dying and mutilation and whatnot, which sounds worse than it is. An example: When Gonzo tells his ghost host that someone could unscrew his head and take a look inside, the host says, “That could be arranged.” Another: Gauzey’s head vanishes from the rest of his body and reappears in a hatbox. We see plenty of ghosts and skeletons and skulls, along with a mummy or two. It’s suggested that no one has ever survived the challenge that Gonzo’s embarking on. “I always drop folks off here, but I never seem to pick them up,” the chauffer says.

But the only real physical violence we see is when a cart full of food smacks into Gonzo and Pepe (which they then ride through the halls), and when someone falls into a gaping mouth from a pretty significant height. (The faller survives, and in fact is burped straight up.) And if you’re sensitive to the fate of spiders, beware: Several are eaten.

Oh, and the Swedish Chef chases a sentient pumpkin with a chainsaw.

One of The Bride’s former mates—a penguin—quacks up a storm after his fellows describe their sad passing. We can’t hear anything besides those quacks, but his fellow grooms are appalled. “You can’t say that!” One says. “This is a family show!”

But outside that and one use of the work “heck,” this show is clean as a newly scoured tombstone.

Several people seem to carry wine glasses about, including one ghost hanging from a chandelier. Pepe proclaims, “If I don’t see some champagne cocktails and horsey derves, ASPCA, I’m outa here!”

A couple of Muppets burp.

So says our Ghost Host (played by Will Arnett) near the top of Muppets Haunted Mansion. Those three words neatly sum up exactly what viewers should expect.

Visitors the Haunted Mansion at either California’s Disneyland or Florida’s Disneyworld (and perhaps those Disney parks in France, Japan and China, too) are welcomed with the words “Welcome, foolish mortals!” And in many respects, this show feels like a straight-up tour through that very familiar ride—only with Muppets.

The stretching portraits are there, only depicting famous (or at least semi-famous) Muppets characters. The busts that seem to stare at you are there, too, but they’re Professor Bunsen Honeydew and Beaker. (“I had so hoped we would have a bigger cameo, Beaky,” Honeydew sighs.) The Doom Buggies are represented. The singing graveyard statues sing. The show feels like the ride, right down to the wallpaper, only with a bit of a Muppet twist. And if you haven’t been to Disney’s Haunted Mansion, the show still holds up just fine (even if it might just serve as an hour-long encouragement to go).

Still, some things have gone missing—specifically any elements that might seriously frighten someone. In the early part of the Disney ride, for instance, a lightning bolt illuminates someone hanging from the rafters—an apparent suicide—accompanied by a chilling scream. In Muppets Haunted Mansion, the lights still go off and you still hear a scream… but when the lights come back on, we see that it’s a screaming goat. (Muppetified, of course.) No body in sight.

It’s all quite silly and, often, pretty funny. Despite all the Muppetized skeletal remains we see, the only bone it really cares about is the funny bone.

The show’s biggest caution, naturally (or unnaturally?) is its body of teeming ghosts and all the spiritual questions that invariably lurk behind the mansion’s many doors. Sure, they’re all familiar Muppets characters wearing the equivalent of trick-or-treat sheets, and many a joke offers a wink that the whole thing is just a Disney+ special. Still, some of the darker spiritual elements might feel a little out of place for some Muppet fans.

Muppets Haunted Mansion does indeed feature a mansion. It has plenty of Muppets. But this isn’t the sort of show that’ll haunt you. Indeed, the only things that might follow you home are the eye-rolling, groan-worthy but still somehow-funny puns and gags. If the narrator for this Disney+ ride should offer a warning, it might be, “Beware of hitchhiking jokes!”