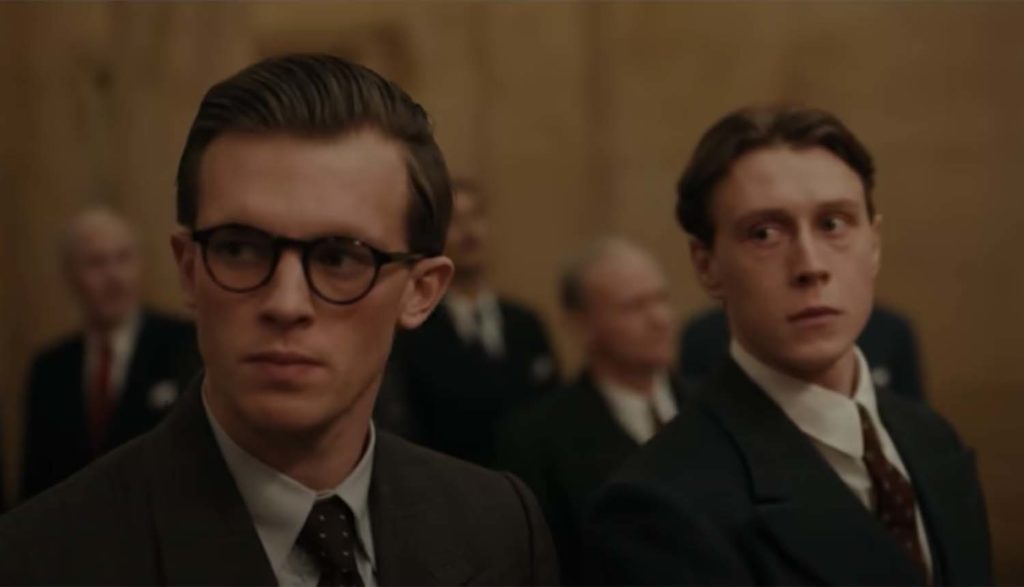 Hugh Legat and Paul von Hartman, along with Paul’s girlfriend, Lenya, celebrated with champagne and cigarettes as fireworks marked their graduation from Oxford in 1932.

The men excitedly discussed their future plans. For Hugh, a Brit, it meant a trip to Germany to visit his two friends before pursuing a career in the foreign office of the British government. Paul, a proud German, gushed about the direction his country was going under the leadership of Adolf Hitler.

It had been 14 years since the Great War, and Hitler made people “proud to be German again!”

Alas, Paul’s pro-Hitler leanings led to an end of his friendship with Hugh. (It also ended his relationship with Lenya, who called the Nazis a “bunch of thugs and racists.”) And for six years, the men didn’t speak to one another.

Then, in 1938, circumstance forced them together again. Paul, no longer entranced by Hitler’s patriotic speeches—having witnessed the results of his leader’s anti-Semitism firsthand—is now working to subvert Hitler from within his own government.

He comes into possession of a document—one that would prove Hitler’s intentions not only to reclaim German territories in Czechoslovakia, but to conquer all of Europe.

Paul knows he could be killed for even thinking of arresting Hitler. And he’s not sure who he can trust since the Wehrmacht’s generals (Germany’s Nazi forces), while unsupportive of war, are completely devoted to Hitler.

The one person he can trust is Hugh. But Hugh isn’t sure he believes his former Hitler-fanatic friend has actually turned over a new leaf.

Espionage is an act prefaced around deceit. However, there are some good things that can come from it.

Hugh and Paul (and a few others) both play their parts of spying and lying in order to prevent World War II. They put their lives on the line but, in a way, also commit treason. It’s a terrible position to be in. They don’t want to go to war, but they need to in order to arrest Hitler. So, while they are the first to admit it’s all a bit perverse, the ends do justify the means since they are ultimately working to save as many lives as possible.

Neville Chamberlain, England’s Prime Minister, also uses some underhanded means to achieve peaceful ends. He lies and manipulates others, namely Hitler, to prevent a war with Germany. At times, it appears he enjoys the accolades he receives for his diplomacy. But in private, he states his own willingness to be executed if it means that the people of England could be spared another war. (Ultimately, Chamberlain’s decision to sign the Munich Agreement only helped delay World War II by a year. But that year gave the Allies time to rally and prepare their armies for war.)

When Hugh is asked whether he’s “happily married,” he replies it’s only “so-so.” Hugh and his wife, Pamela, disagree about the importance of his job. While Hugh understands that his position in government could help prevent war, Pamela is of the opinion that his family should be his priority. It doesn’t help that Hugh’s boss scolds him for taking a long lunch on his anniversary (which he did in an effort to appease Pamela, who was feeling neglected), stating that sometimes one’s family has to take a back seat to one’s duty.

Chamberlain says that peace is “sacred” to him and that he fears for the spiritual wellbeing of the English people if they don’t see their leaders doing “absolutely everything” to prevent another World War. Several people exclaim “God bless you!” to the prime minister.

A man and woman make out partially clothed (we see the woman’s bra). A few couples kiss passionately. A man states his desire to stay in bed all day with his wife. We hear that a woman’s husband was unfaithful to her. A few guards joke about having women visit their rooms at night.

Much of this film takes place before World War II begins. And we hear about the people who lost their lives in World War I as well as Germany’s plans to invade and conquer Czechoslovakia.

However, the war is coming. Hugh asks his wife to flee with their son to the countryside for safety while he is in Munich. People sell gas masks on the streets of England. And Pamela says her “motherly devotion” is being tested after hearing instructions to don her own gas mask in case of emergency before assisting her son with his. (People also express their disgust that gas masks are even made in children’s sizes.)

The Holocaust has also begun. Paul takes Hugh to a hospital to visit Lenya, his old girlfriend and Hugh’s friend as well. Practically comatose, she is unable to move or even speak. Paul tells Hugh she was arrested at an anti-Hitler protest. When the guards at the women’s camp she was sent to found out she was Jewish, they were “rough.” It was reported she fell out a window, but Paul believes she didn’t fall so much as she was pushed, because they also carved the Star of David into her back. (These types of actions against the Jews, we learn, convinced Paul to betray Hitler.)

Two men get into a fist fight (and one spits on the other). Someone nearly assassinates Hitler, pulling out a gun, but decides not to at the last second. A man says he used to shoot rabbits as a child when asked if he knows how to handle a gun. A man puts his friend in a headlock.

We hear the f-word twice (once in German with English subtitles). The s-word is used another five times, as well as “a—hole,” “bloody,” “b–tard,” “d–mit,” “d–n” and “h—,” some of which occur in German. God’s name is abused 11 times (twice paired with “d–mit”) and Christ’s name is also abused once. Someone is called a “Jewish pig.”

People drink and smoke (cigars and cigarettes) throughout the film. Several people become drunk at a party, and we see one man passed out on the floor.

Hitler runs on the campaign promise to restore Germany to its former glory. And we see the idol-like devotion many people have to him. Even people like Paul insist that a vote for Hitler as chancellor is not a vote against Jewish people.

However, Hitler’s lies soon become apparent. We know that Jewish people were forced to register and wear a Star of David on their clothing. But in this film, we also see a police officer forcing Jews he found walking in the street to get on their hands and knees and scrub the sidewalk. We also see graffiti on Jewish-owned businesses, telling them to go back to Jerusalem. And we hear that many people fled the country in fear.

While we can praise Chamberlain for trying to prevent war from happening, there is some question about whether he should have acted sooner. He adopts a “let’s wait and see” mentality regarding Hitler’s actions. And he repeatedly states that Germany’s “border dispute” isn’t England’s war. Chamberlain’s reluctance to act decisively leaves characters (and audiences) wondering if Hitler might have been arrested (or even killed) sooner, preventing the war altogether.

When Hugh says that “New Germany” is being built on the suffering of other peoples, Paul calls him a hypocrite, referring to the British Empire’s history of slavery.

Several men urinate in a river. Two men say an opposing soccer team urinated in their pants in fear.

Paul von Hartman would be the first admit he was foolish when he was young. He fell prey to Hitler’s charisma and promises of a “New” Germany. But he now knows he was wrong.

“History is watching us,” he says.

He and other members of the German resistance can’t afford to let Hitler go on unchallenged. And neither can Hugh Legat.

Acting as messengers to their respective world leaders, they have more power than they realize. They just have to be brave enough to use it.

This film, based on the novel by historical fiction specialist Robert Harris, documents the espionage, treason and negotiations that are widely believed to have taken place prior to the signing of the Munich Agreement, which permitted the German annexation of the Sudentenland in Czechoslovakia in 1938 and delayed the start of World War II.

Content-wise, we hear about the travesties of war (and see bits and pieces of the results of the Holocaust). Language can be harsh. And sexual encounters are not always kept private.

But we also witness great sacrifice here. Men and women put their lives on the line to obtain information that could save the lives of millions in this well-told story of the heroic, but ultimately doomed, espionage efforts to stop World War II.