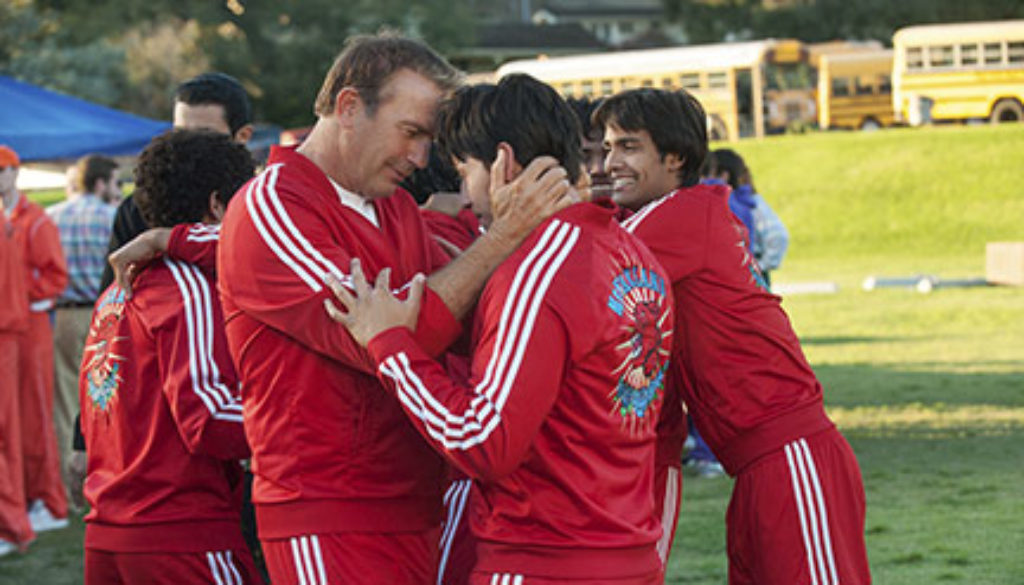 High school coach Jim White has had his share of troubles. And most of them have sprung from his own actions. You could say he’s got a bit of a temper problem.

I mean, he’s never beaten anybody up or anything. But he’s certainly never backed down from a shouting match if some other teacher or school board member gets all up in his grill. And he’s not averse to verbally, um, pushing his players if he thinks it’ll help get their heads on straight.

Of course, the shoe incident was a kick too far.

One of the seniors on his football team in Boise, Id., was mouthing off and negatively impacting the team. When Coach White told the kid to get out of the locker room, he tossed a shoe in his direction to make the point. Well, the shoe bounced off a locker and nicked the mouthy kid’s cheek with one of its cleats. And that was that.

So here Coach White is in the fall of 1987, driving his family to a new town and a new last-chance job—a lowly post teaching science and P.E. in the California town of McFarland. It’s an impoverished agricultural community that’s predominantly made up of Mexican-American farmers and produce pickers. In other words, it’s dominated by a culture that White and his family aren’t used to.

In fact, as he, his wife and their two girls are driving into town for the first time, youngest daughter Jamie can’t keep herself from gasping out, “Are we in Mexico?” And that’s a question the coach was almost wondering himself. But this is their new home, and he needs to make the most of it if he hopes to keep teaching at all. He’s resolved to work hard and find his new niche.

It’s only after the coach notices how fast several of his new high school students are that he wonders if that new niche might involve starting a cross-country team. He has absolutely no experience with the sport. But there are state grants he can submit for and instructional books he can find. It’s worth a try. Hey, if this job is going to be nothing but an uphill slog, maybe he can convince some students to join him in the run.

When first moving into town, it’s obvious that the Whites are all pretty shaken by their new environment. And it’s also pretty clear that the Latino community around them isn’t enthused about their arrival either. But with time, a sense of empathy begins to blossom on both side of the cultural divide. Friendships are formed. A mutual respect begins to grow. The kids go from sneering at this new “White” guy to respectfully addressing him as “Coach.” The community opens its doors and its arms to the Whites and to the strange idea of supporting a “local sports team.” Eventually the coach’s wife, Cheryl, realizes that, “Nowhere I’ve ever lived has felt this much like home.”

For his part, Coach White strives to better understand the hard-working Latino culture, and he adjusts his coaching demands to the lifestyles of the McFarland families. He helps his team members on and off the practice field. And he encourages the boys to reach for physical and educational goals they never thought they could attain.

And the high schoolers? We see them work their legs off to improve their performance times … and the rest of their lives, too. We’re told during the credits that all seven of the team’s runners went on to college—eventually becoming teachers, coaches, writers and landowners.

The cross-country team kneels and prays thankfully after placing fourth in a race. A member writes a poem for class about feeling like a “god” when running.

Some of the women in the community wear dresses that reveal a bit of cleavage. When White and his family first show up in town, a few of the local young men ogle eldest daughter Julie. We hear that a runner’s younger sister got pregnant out of wedlock. (The baby is later welcomed and loved by her whole family.)

After a special celebration, some gangbangers stir up an offscreen fight. We then see one guy bandaged and wearing a bloodied T-shirt. Julie’s on the ground with scraped knees after, we’re told, she fell down as several local boys stood up to protect her. On the football field, we see a teen take some massive hits.

We see one of the runners vomit before a big race. “Upscale” kids make racist comments about the Hispanic McFarland team; one quips, “I hear they can’t run without a cop behind them or a Taco Bell in front of them.”

Disney does know a thing or two about creating underdog sports flicks. With the likes of The Rookie, Miracle, Secretariat and Million Dollar Arm under its belt, the House of Mouse has demonstrated it can find that winning family blend—something that appeals to moms and dads while keeping it clean and inspirational for the kids. And with the stirring true tale at the heart of McFarland USA, Disney hits the bull’s-eye, er, wins the big race once again.

Yes, there’s a certain predictable, formulaic feel to this cross-cultural cross-country drama about a beleaguered teacher inspiring young kids beyond their own expectations. But it’s a formula that moviegoers will find as easy to slip into as an old pair of running shoes. (See? Now I’ve got the right metaphor nailed down.) With Kevin Costner setting the pace, the film hits its stride early on, and you can’t help but cheer for him, his family, their new Hispanic hometown, and the young, inexperienced runners for whom it serves as their starting line.

But this is a movie that’s not just about running like crazy for the sake of a winning medal. It’s about racing toward and then enjoying the rewards of hard work and friendship, community and intercultural acceptance and understanding.