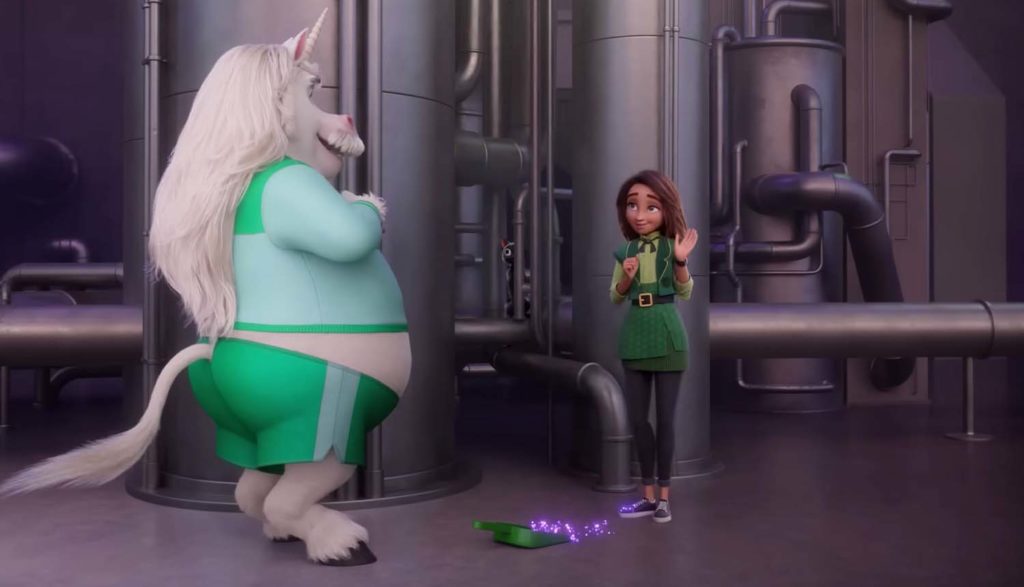 Sam Greenfield is about as unlucky as they come. On her first day in her new apartment, she wakes up late for work, gets locked in her bathroom, can’t seem to find matching socks and drops her toast—jam side down, of course. And her bike tire goes flat to boot.

Then Sam finds a penny on the ground, apparently dropped by a  black cat. And you know the old adage: “Find a penny, pick it up, and all day long, you’ll have good luck.”

The next morning, Sam’s luck changes. She wakes up right on time to a notification that her online homework was submitted successfully. The first two socks she grabs match. And the toast? Well, as long as Sam is touching the penny, it simply can’t fall jam side down.

Sam is ecstatic. And she knows exactly what to do with the penny: Give it to her good friend, Hazel.

Hazel and Sam lived in the same group home before Sam turned 18 and aged out of the foster care system. Hazel, being much younger than Sam, is still there, searching for her forever family.

It might be too late for Sam to get adopted, but it’s not too late for Hazel. And Sam will do anything to make sure Hazel doesn’t have to face the same disappointment she faced herself.

But then Sam’s luck turns again.

She sets the penny down just for a moment to use the bathroom. But that temporary separation is all it takes for Sam’s bad luck to return. And she accidentally flushes the penny down the toilet, along with any hope of helping Hazel.

But then, Sam spots the black cat who dropped the penny again. And the cat starts talking—chastising Sam for losing his lucky penny, in fact—before he runs off.

Sam chases after him—right through a portal to another land, the Land of Luck.

Bob (as Sam learns is the cat’s name) can’t get caught with Sam. For starters, he’ll be in huge trouble for allowing a human into the mystical world of leprechauns, unicorns and dragons. And he’s in enough trouble already: He’ll surely be banished to Bad Luck (home to roots and goblins where nothing lucky ever happens) for losing his lucky penny to begin with.

So, the two make a deal: Bob will help Sam obtain another penny to borrow for Hazel’s upcoming weekend visit to increase her chances of getting adopted. Then Sam will return the penny to Bob so he won’t get banished.

Surely nothing could go wrong, right? After all, they are traveling through the land of Good Luck.

Despite Sam’s unfortunate circumstances, she maintains a positive attitude in all things and never gives up. Flat tire? That’s what the tire pump is for. Broken tire pump? Pssh! Nothing a stick of lip balm can’t fix.

Sam does become downhearted at some points, fearing that her bad luck will stop her from ever doing something good with her life. But when she does get discouraged, her friends build her back up. They tell her that she’s a kind person with a big heart—the kind of person who shares her panini with a stray, supposedly unlucky, black cat.

They reassure her that she’s already done something good just by being a good friend. Her first instinct is to share what she has and help where she can—even if that means she won’t get what she wants for herself. And Sam proves willing to endure all the bad luck in the world if it means she can give even the smallest amount of good luck to Hazel.

Eventually, Sam also learns that all the bad situations in her life actually helped build grit. They taught her how to “pivot” and find creative solutions. Her tenacity inspires those around her to roll with the punches as well. And when Good Luck falls on hard times, she’s able to share these lessons with those in charge and help them find solutions.

Bob, for his part, learns that having good luck all the time doesn’t necessarily mean you have good character. He treats Gerry and Jeff (two characters consider themselves to be Bob’s friends) like assistants. And he makes it a point not to get to know Sam too well.

However, Bob eventually learns the same lesson as Sam about bad luck. And he realizes that his avoidance of it never actually gave him what he wanted: a forever family of his own. He makes amends with Gerry, Jeff and Sam, discovering that a family can be forged by the bonds of friendship.

The Captain (a leprechaun who oversees the security of Good Luck) has it out for Bob since she thinks he’s shifty (which, as we later learn, is true). When she’s given the opportunity to arrest him, she takes delight in it. However, after Bob apologizes for his actions and takes a big risk to right his wrongs, she forgives him and changes her attitude toward him.

[Spoiler Warning] When the land of Good Luck is destroyed by bad luck, the creatures of Bad Luck come to help. Having experienced plenty of bad luck in their own lives, they are perfectly suited to find solutions to the problems that arise, and they rescue many Good Luck creatures trapped on ledges and platforms.

There’s a lot of superstitions that pop up in this film—the penny adage, thoughts about black cats being unlucky and a variety of “good luck charms” to name a few. We’re told that all luck (good and bad) is manufactured, but the nature of that process is still magical. And while the film ultimately emphasizes that how we handle our luck is more important that the luck itself, we’re still dealing with spiritual beliefs that families may want to address.

Sam attributes her bad luck to the “universe” messing with her. Leprechauns, unicorns, dragons and goblins (not to mention talking cats) all make an appearance.

Sam removes her pants (offscreen) to take a shower. We hear about a love story between two characters. In the background of a restaurant, two men and a child dine. Some could interpret the men to be a couple.

Sam’s (and others’) bad luck causes all sorts of mishaps. Characters fall, tumble and get tossed around. However, nobody is permanently injured. And when we hear that a Land of Luck cat was run over by a tricycle (and subsequently see the cat heavily bandaged on crutches), we’re told that Land of Luck creatures heal at the speed of light—and the injured cat waves merrily.

Just one questionable use of God’s name. Other than that, there are two uses of “heck” and one of “buttocks.”

None. However, there is a juice bar in Bad Luck (though it appears it doesn’t serve alcoholic beverages).

Sam and Bob (and Gerry by coercion) break a lot of rules to achieve their ends. They lie, steal and sneak into places they aren’t allowed. And these bad behaviors directly result in chaos for Good Luck.

In two separate instances, we see young girls disappointed when their adoptions fall through.

There are several jokes about dog feces (since it’s considered bad luck to step in them). There’s a joke about kitty litter. We see a drone covered in sewage after retrieving a flushed penny from a sewage treatment plant.

Let’s start by addressing the elephant in the room: good luck vs. bad luck. The film’s plot is driven by this theme. And for Christian families watching, it’s worth a discussion over these spiritual elements.

However, Luck throws us a bone. Rather than emphasize the importance of any kind of luck, it focuses on how characters react to that luck. Several characters choose to share their good fortune with others, allowing everyone to experience the joy and hope that good luck brings. And when bad luck comes along, they pivot, learning from the experience and adjusting their approach to handle it.

All it takes is to swap the word “luck” for “circumstances” and you can have a quite meaningful conversation about how we respond when something happens—good or bad.

That in and of itself is a really nice message. But Luck has a second message to deliver regarding foster care and adoption.

Sam, as I mentioned in the introduction, aged out of the foster care system. She’s set up with an apartment and told that she needs to attend college and get a job. And other than a phone call in a few months to make sure she doesn’t have any additional questions, she’s completely on her own.

It’s really rough on her. She feels alone, because she is. And anyone who may have gone through similar circumstances—such as being disappointed by a cancelled weekend visit with a potential family—could experience some difficult emotions watching this film.

However, Sam learns an important lesson about “forever families.” She knows that a forever family is someone who sticks with you no matter what. They’re there for you, and they love you. But what she discovers is that doesn’t only mean adoption. It can also mean the family we find through friendships. And that’s how Sam finally finds her own forever family.

These two great lessons paired with the fact that there’s practically zero content (other than the luck aspect, which I addressed above), makes Luck a movie parents will want to enjoy with their families.