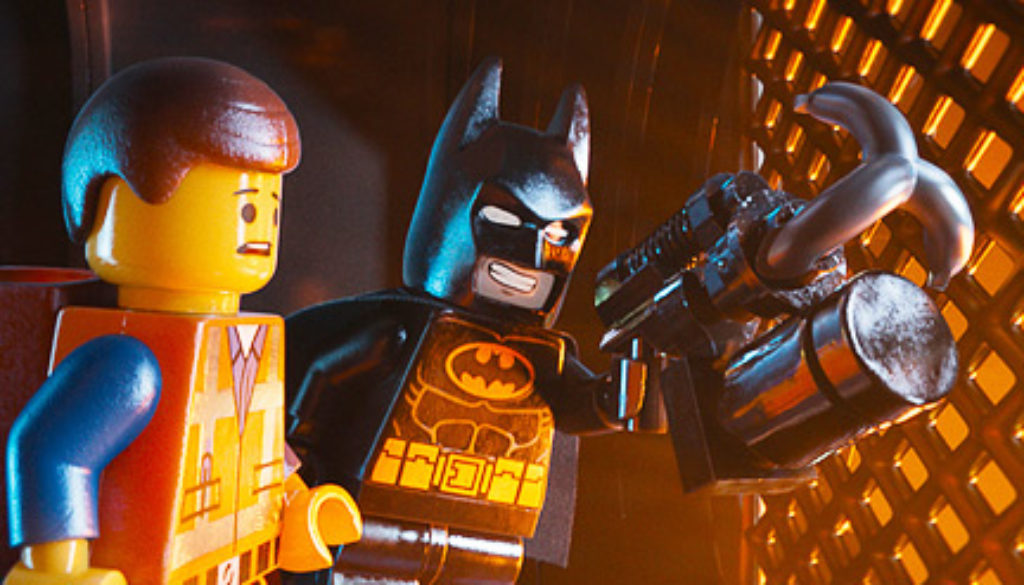 Emmet is an average nobody. I mean, we all have something that makes us someone, but Emmet doesn’t really even have that. On the other hand, he’s a very nice, very positive, very devoted average nobody with nothing. His favorite song is “Everything Is Awesome.” It’s a catchy tune he could listen to all day, and usually does. When he goes to work at his average construction job, building average skyscrapers for his big boss, President Business, why, Emmet can’t help but smile ear to blocky ear.

Then one day something happens that changes all that.

Emmet runs back to the construction site after work to grab his prized instruction manual he left behind and spots this beautiful girl digging through the debris. She’s the most un-average girl he’s ever seen. So much so that his jaw would have hit the floor if a painted-on jaw could do such a thing.

Then, after he slips and takes a series of accidental tumbles—something pretty average for Emmet—the splendid girl mistakes him for “the most important person in the universe.” (Otherwise known as the Special.) Emmet hasn’t got a clue what that even means, but if she wants to talk to him about it, then that’s super stupendous. Besides, maybe she can tell him what this big piece of something or other is that’s stuck to his back.

The girl’s name, by the way, is Wyldstyle. How’s that for unique? And she’s a master builder who’s able to snap together just about any blocky thing she can dream up. (Sigh. And wow!)

Wyldstyle takes Emmet to meet a wizard-like guy with a long white beard named Vitruvius. And he seems to think Emmet is this prophesized Special too. They also tell him this incredible story about President Business and an ancient relic called a Kragle and the coming of the end of the world … in three days! It all seems so far-fetched and unbelievable and out of the ordinary.

But Emmet’s not going to complain or worry or even doubt any of it. For the first time in his very square life there are people who think he might be more than mediocre. And they just happen to be the most cool, smart and incredibly AWESOME people he’s ever met! If they want him to be Special, then he’ll work to make that true.

He just has to piece it all together.

[Connecting studs and plot spoilers are both contained in the following sections.]

You’ve figured out by now that Emmet is a perfectly ordinary guy who is pretty unexceptional in every way. (We find out that the people he works with hardly know him and in many cases can’t even remember his name.) But when he gets singled out to be Special, he steps up in a big way. “When you told me I was important and special, that was the first time anybody had ever told me that,” Emmet says to Wyldstyle, whose real name, we find out, is Lucy. “And I wanted to do everything I could to live up to that.” He goes so far as to even be willing to sacrifice his life to save those around him.

That “embrace what is special about you” attitude permeates the movie and is repeated over and over. Emmet’s choices eventually motivate the master builders (a group of individually talented block builders) to work together as a team, sacrifice for one another and stand up to fight what they consider to be an all-powerful evil. There’s even a nice thread in here about the value of following instructions. Get along. Work together. Follow instructions! Those are very nice messages indeed.

And now we get to our first blocky spoiler: In the real world, you see, a young boy with a rich imagination is the creative force behind the whole adventure we’re watching. And though his dad isn’t initially too happy with him, the man eventually embraces the boy and admits that playing imaginatively—and together—is far more enjoyable than working alone on his grand LEGO hobby set.

There are a number of “relics” imbued with special power that are revered in this fantastical world of plastic people. But once we get a closer look at them, we realize that they’re actually discarded items from the real world of human people, such as a tube of Krazy Glue, a Band-Aid and a Q-tip. One of those relics—a special item that the wise man Vitruvius prophesizes about—is a cap to the aforementioned tube of glue. And Emmet receives a quick “vision” when he first touches it. He sees the image of someone Vitruvius defines as the “Man Upstairs.” Then, in the course of things, Vitruvius is killed and returns as a plastic ghost held aloft by a string.

We eventually learn that the entire world of blocks and studs, and all its “magical” happenings are part of the human boy’s imagination. It’s a story he concocts as he snaps together the plastic bricks in his basement. And the Man Upstairs is actually his dad, who warned him not to play with the elaborate cityscape he’s constructed out of his prized LEGOs.

There’s an obvious attraction developing between Emmet and Lucy that culminates with them … holding hands. (She’s been dating Batman up till this point.) Somebody makes a comment about Wyldstyle having a “heavenly body.”

If the blow-’em-up action and wham-bam fight scenes of this pic were part of a live-action movie, they would demand several paragraphs detailing the damage in a Plugged In review. There is a constant stream here of everything from fast-moving traffic smash-ups, to bombastic fist- and gunfights, to horsemen riding off a high cliff and erupting in a nuclear explosion, to a whole cloud-based fantasy land being blown up and destroyed.

The difference here, of course, is that this is an animated world populated by plastic blocks. Even the rapid-fire projectiles and an explosion’s resulting flames are all made of colorful plastic—just as they are when kids around the globe play with LEGOs on their bedroom carpet. Characters, buildings and vehicles bash, crash and fall apart into their primal pieces, and so nothing feels deadly or particularly permanent. A tube of Krazy Glue becomes the ultimate deadly weapon because it can freeze the LEGO folks in place, effectively rendering them lifeless. (We see numerous examples of this.) A laser ray is used to melt plastic and almost zaps Emmet before it’s stopped. Indeed, “melting” is threatened as a torture technique. A head is lopped off a “man’s” neck.

“Darn,” “dang it,” “butt” and “oh my gosh” are all repeated a few times each. We hear exclamations of “what the heck?” Name-calling includes “butt,” “dorky” and “ding-dong.”

A group of guys talk about meeting up at a “sports bar” after work (but they say it’s the chicken wings that prime the pump for getting “crazy,” not alcohol).

There are silly lowball gags thrown into the comedy mix. A pair of robots, for example, jump up on a copy machine to make photocopies of their plastic block backsides. Similarly, a running gag revolves around a favorite TV show called “Where Are My Pants?” So we sometimes see “naked” LEGOs, all yellow and “bare” instead of painted with “clothes.” When someone states that a proposed plan will be “really hard,” a pirate-robot scoffs at the statement saying, “Wiping ye bum with a hook for a hand be really hard.”

Picture dumping a box full of LEGOs, Lincoln Logs, old action figures, cast off toy cars and plastic thingamajigs on the rug. (Something I was very fond of doing as a tyke, much to the chagrin of my mother who never seemed to find the joy in it.) Then think of staging all those playthings in a wacky action adventure of your own boundless youthful imagining.

That pretty much sums up The LEGO Movie experience. (If, that is, you were also very good at coming up with giggle-a-minute quips and had some talented movie star pals who could voice the whole thing with grown-up glee.) It’s a bright, silly and breakneck-paced good-guy-vs.-bad-guy tale that offers kids and kids at heart some pretty big lessons for such a small-scale story:

1) Believe in yourself. You can never know how much you can really do—how special you really are—unless you give it a good try.

2) Let your imagination lift you up to creative rapture. There’s nothing more fun or fulfilling than that.

3) Work together to get the job done right. After all, a bunch of geniuses all going in opposite directions can’t accomplish anywhere near what a gaggle of workaday guys and gals can if they cooperate and push forward down the same path.

For those who have played any of the LEGO video games, the transition to the big screen will feel very familiar. The film does, however, pack in more “dangs” and “darns” and “what the hecks” than you’ll find while gripping a game console. And the story is actually more high-action than the games, too—which equates to lots and lots of chases, explosions and rapid-fire plastic bullet shootouts between heroes and villains.

Still, like the games—and my blocks on the rug—all that thumping and bumping comes off as a playful part of a kid’s overactive fantasies. Even a chap losing his head and reappearing as a glow-in-the-dark toy ghost feels inconsequential thanks to the movie’s connect-a-block-and-break-everything-into-pieces goofiness.