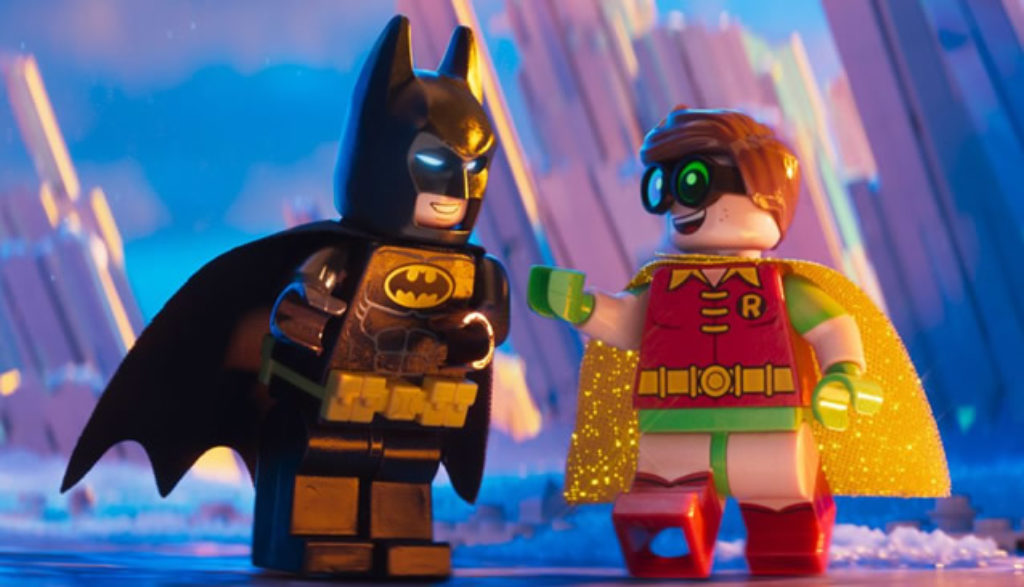 The Joker’s calling card is his maniacal laugh. So what could possibly make him cry?

The Joker’s tears aren’t because the Caped Crusader has once again foiled his latest nefarious plot to destroy Gotham City (though he has). No, Joker’s crying because Batman doesn’t agree that the green-haired, pale-skinned psychopath is his “greatest enemy.”

“Are you seriously saying there is nothing special about our relationship?” the Joker asks, incredulous.

“Batman doesn’t do ships,” the cowled crime-fighter growls. “As in relationships. … You mean nothing to me. No one does.”

And so Joker’s tears fall, even as Batman returns home to celebrate another victory over the bad guys. “It must be great to be Batman,” a news commentator gushes. “I can only imagine he’s going home to party the night away.”

Well, mostly. His loyal butler, Alfred, is always attentive to Batman’s needs. But other than that, the Caped Crusader’s billionaire alter ego, Bruce Wayne, shares his life with no one. The closest Bruce comes to a relationship is with an old, happy family portrait on the wall—one picturing little Bruce smiling with his long-deceased parents.

“Hey, Mom,” Bruce says to the painting. “Hey, Dad. I, uh, I saved the city again today. I wish you could have seen me. I think you would have been really pleased.”

The loss still traumatizes Bruce. But he’ll never admit it. Not even to Alfred. No, the stoic vigilante is determined to live his life on his own terms. Alone. Never needing anyone. Never loving anyone. Never opening up his heart to the possibility that he might experience such searing hurt again.

But it’s hard to go through life without relationships. Alfred knows that, even if Bruce Wayne doesn’t. And when Bruce “accidentally” adopts fellow orphan Dick Grayson, well, Alfred wisely knows that it’s time for Batman to open his heart—even if it takes a while for Batman himself to come to the same conclusion.

The catalyst for that realization is, of course, the Joker, who hasn’t taken Batman’s rejection well. No, Joker is determined to prove that he really is Batman’s greatest nemesis, unleashing a hoard of dark, dastardly and dreaded bad guys to make his point.

So if Batman is going to win this fight, he’s going to need help … even if he still has a really, really hard time admitting it.

There’s plenty of heroism in The LEGO Batman Movie, of course. Bruce Wayne’s alter ego amps up his heroics over and over again. (As do his eventual teammates, by the way.)

Unfortunately, he’s pretty aware of how heroically awesome he is. Bruce thinks he’s so competent that he doesn’t need any help. In fact, when other people try to aid him—whether it’s eager-beaver Dick Grayson (who eventually becomes Robin) or new commissioner Barbara Gordon (outgoing commissioner Jim Gordon’s daughter), or longsuffering and ever-patient Alfred—it mostly cramps his style. And that’s where the movie’s other themes—the need we have for friendship, the importance of teamwork—start to come into play in a positive way.

Underneath Batman’s arrogance, bravado and pride lurks a darker secret: Bruce won’t let anyone in because he’s terrified of losing still more people he loves. Alfred observes, “Your greatest fear is being part of a family again.” In a way, some of Batman’s ill-advised attempts to deflect help are actually intended to protect those he says he’s not in a “ship” with. Thankfully, they persevere and push past all of Batman’s defenses, helping him realize in the end that he needs other people, that he needs a team, that he needs family. That he needs, in a word, love.

Along the way, we also get some nice commentary (mostly from Alfred) about the importance of foster parents (which Alfred himself essentially was for young Bruce). Indeed, it’s clear Alfred still thinks of himself as a surrogate dad to Bruce Wayne, as he’s reading and applying principles from the book Setting Limits for Your Out-of-Control Child. Bruce, meanwhile, isn’t thrilled about being a foster father for Dick at first, but he warms significantly to the idea by film’s end.

Joker cackles that Gotham City will be plunged into an “eternal abyss.” While receiving accolades from a crowd, Batman puts his palms together, bows a bit and says to himself, “Pray hands, pray hands,” as if giving himself stage direction. Someone uses the Hindu greeting, “Namaste.” Team Joker includes magic-wielding and supernatural villains from many iconic stories, movies and, of course, DC Comics. (One of those is the character known as Zodiac Master.) Robin exclaims, “Holy family photo, Batman!”

Batman and Joker’s connection is never, ever romantic. But it does appropriate the language of a romantic breakup. At one point, Jokes tells Bats, “I’m not going to be part of a one-side relationship any longer. I’m done.” It’s just one of several similar lines of banter that humorously play off their combative “bromance.”

Batman is quite smitten with Barbara Gordon, so much so that the 1986 Cutting Crew song “(I Just) Died in Your Arms” humorously plays when he sees her; later, Batman tries to distance himself by calling Barbara a “platonic coworker buddy—just a friend.”

Batman, it turns out, is something of a closet rom-com fan. He medicates his loneliness with movies. We see him watching the (live action and R-rated) movie Jerry Maguire, specifically the iconic scene where Renée Zellweger’s character says, “You had me at hello,” and Tom Cruise’s character says, “You complete me.”

Bruce Wayne labels himself a “playboy.” Someone suggests Batman should be spending his time with “Russian ballerinas” and “lady active-wear models.” A dance party with other superheroes shows Superman repeatedly doing hip thrusts.

A couple of silly gags involve Batman and Robin’s full-length pants coming off. There’s a joke about someone’s “briefs.” We see Batman “shirtless.” A lightning-fast, blink-and-you’ll miss it background image briefly pictures a Gotham movie theater with the title “Two Shades of Grey” on the marquee.

Slapstick, LEGO-meets-superhero violence fills this movie. Battles between the good guys and bad guys seem to wreak terrible havoc on Gotham (much as we might see in similar live-action comic book flicks), but there are never any obvious toy casualties shown. Plenty of heroes and villains get bashed, smashed and blasted, with some falling down and others falling out of planes. But it’s not clear that any of them ever die. If anything, cartoony violence is more likely to be played for laughs, such as when Robin gets smashed into the windshield of the Batmobile because it doesn’t have a seatbelt.

One of the biggest content concerns in the movie has to do with one character’s name. Richard Grayson gives Batman his full name, then adds, “All the kids call me Dick.” Batman misunderstands what he’s saying, turning the common nickname into anatomical double entendre when he responds, “Well, children can be so cruel.”

There’s one inarticulate “gah!” and one use of “dear gosh.” Elsewhere, “oh my gosh” is exclaimed about 20 times (including one scene where Robin repeats the phrase in rapid-fire style a dozen or so times). Batman labels a particularly bleak area a “heckhole.” We hear “oh my goodness” once. There’s one unfinished “what the …” and one use of “what the heck?” “Shut up” gets lobbed twice, and we hear the phrase “Iron Man sucks” (the password to the Bat Cave) twice as well. Someone says “ah, shoot.” Other name-calling includes “loser” and “street meat,” and we hear the threat “eat dirt.”

Batman and Joker trade “I hate you” barbs, though it’s humorously played up as an odd reconciliation of sorts in the context of the movie.

There are visual and verbal allusions to several movies that are either R-rated (Jerry Maguire, The Matrix) or quite problematic despite a PG-13 rating (Suicide Squad).

Bruce Wayne is shown with some kind of a drink in his hand at Barbara Gordon’s installation ceremony. When she says, “It takes a village, not a Batman,” he spits the drink out in shock. Batman mentions two different kinds of wines, chardonnay and pinot blanc, in conversation with Alfred.

There are quite a few mild toilet-humor moments. Something is said to “smell like dirty underwear.” There’s a reference to “farts” and gas being “silent but deadly.” Backside jokes include Batman meanly dubbing Alfred the “Buttler.” Joker breaks into the Bat Cave and says, “I’m rubbing my butt all over your stuff. … You’re going to have to rename this the Buttmobile.” Someone says it’s time to “kick all their butts.” During a tense moment, Robin says he needs to use the restroom. Shortly thereafter, he exclaims: “Good news: Our bathroom problem is solved” (obviously implying that he wet his pants).

Batman and Robin steal something from Superman’s Fortress of Solitude, with Batman rationalizing the misdeed by saying, “To right a wrong, do a wrong right.” (He attributes the saying to Gandhi, but Robin isn’t buying it.) Batman advises Robin to “hide every part of yourself, physically and emotionally.” He also tells his young charge, “Batman’s Life Lesson No. 2: no bedtime.” (Batman’s serious, while the movie obviously isn’t.)

For all its comedic send-ups of Batman—and there are a lot of them—The LEGO Batman Movie delivers a surprisingly tender, significant message: No one can make it alone. Not even Batman.

The foundation of the latest LEGOized take on a pop-culture icon is solid. It emphasizes friendship, family, courage, sacrifice, being honest about fear and admitting we need others. There’s even a positive shout-out for foster parents who’ve chosen to love and care for orphaned children. Bravo, LEGO Batman!

I loved all of that. As a parent, what I was slightly less crazy about was the amount of bathroom humor that slushes around as well as some cultural references that, while funny, don’t belong in a kids movie. And I definitely could have done without the double entendre reference to Robin’s given name, the only face-palming gag I felt was really over the line here.

A tiny bit more restraint could have made this a movie I’d wholeheartedly recommend. As it is, it’s pretty good, but not perfect; heroic, but a bit edgy.