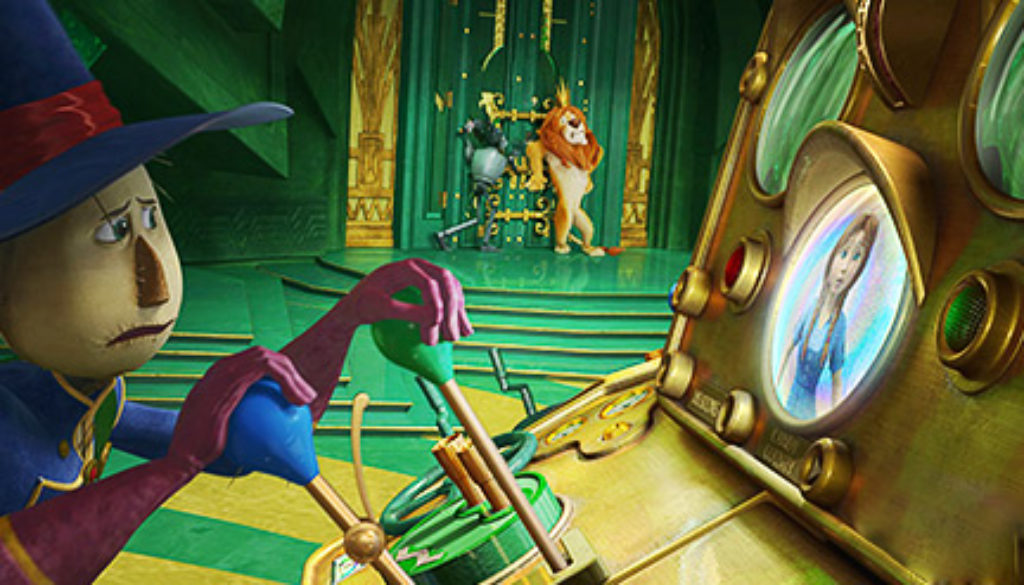 It’s been some time since Dorothy Gale clicked her heels three times and was whisked back to Kansas from that magical locale Oz. And, well, things haven’t been going so well in the Emerald City.

It’s a fellow named the Jester who’s making everyone’s life completely miserable. Because as much as he looks like a clowny sort—clad in his brightly colored spandex and jingly bells—this joker isn’t much of a merrymaker.

The noxious ninny is actually the devious brother of the Wicked Witch of the West, and he’s been taking Oz over region by region—holding leaders captive as magically transfigured marionettes. Even the good witch Glinda has been zapped into a puppet of wood and string.

In a situation like this, there’s only one hope: Dorothy.

Only that sweet wicked-witch walloper from Kansas can get the job done. So her old friends Scarecrow, Tin Man and Cowardly Lion send for her via magical rainbow.

By the time Dorothy and her little dog Toto make their way to Oz, however, her pals are already being held captive by the baddie buffoon. This is sure enough a giant gingham-plaid problem. It looks like Dorothy will have to make some new friends—an overstuffed owl, a marshmallow magistrate and a china doll princess—to make sure all of Oz can be set right again.

At one point the irritated Jester cries out, “Why is everyone always helping Dorothy Gale!”

Of course we know why. It’s because she’s kind and caring. She puts everyone’s needs in front of her own and is willing to stand up against the Jester and his evil schemes no matter what it might cost her. She even leaves her devoted friends behind—in safety—to face the powerful bad guy on her own.

That kind of selflessness stirs the residents of Oz to their brightly colored, candy-flavored core. And nearly everyone Dorothy meets, from a marshmallow guy to a group of grumpy trees, eventually comes to her side.

Back home in Kansas, Dorothy displays her concern for neighbors and loved ones, too—people suffering in a tornado’s aftermath. (It turns out that only a single day has passed in our world while years have passed in Oz.) Dorothy sings of wanting to help fix things so people won’t lose everything … and she eventually rallies the townspeople to help one another.

In light of the Jester’s threats, Glinda makes the salient, almost biblical point that “No good can come from the reign of a fool.”

Marshal Mallow is convinced to join a line of suitors vying for the hand of a royal named China Princess. But he’s properly reluctant in spite of the fact that she is said to be very beautiful. “Appearance isn’t everything,” he states. “The name’s Mallow, not Shallow.” And while other suitors talk of their undying love for the princess—even though they’ve just met her—Mallow simply promises her the hope of “companionship and, someday, perhaps, even love.” (Mallow’s earnestness, honesty, bravery and self-sacrifice eventually convinces the princess that he is indeed the sweet marshmallow of her dreams.)

Oz is a land of magic, wizards and witches—rendered here in a much more broad and cartoony manner than in even the 1939 live-action The Wizard of Oz or the 2013 reimagining Oz the Great and Powerful. This is a world of jabbering jawbreaker candies and boats made from talking trees.

We do catch a glimpse of a wicked witch. And the magicking this time ’round is all done by a clown-prince of a wizard, himself the byproduct of his witchy sister’s conjuring. He is “cursed” to wear a jester’s costume that can never be removed without being instantly replaced with another.

The Jester uses a magic scepter—a combination of his deceased sister’s broom handle and a power-amplifying orb—to perform his tricks. He turns people into puppets, causes an earthquake, stirs up a tornado and concocts several visual effects (puffs of smoke and a cloud of fireflies).

In both Oz and Kansas, things have been smashed and broken by powerful forces. A tornado has ripped roofs off homes and barns, torn down fences and left Dorothy’s little hometown in such disarray that many families decide it’s wiser to simply leave everything behind and start over somewhere else.

In Oz, the Jester uses his scepter to create a building-toppling earthquake, the effects of which smash and crack a number of china doll people. China Princess herself is broken into pieces when Dorothy and her friends are led into a waterfall trap. (Marshal Mallow kindly glues her back together with his own sticky substance.)

The Jester also whips up a purple-cloud tornado in an effort to kill Dorothy. “In a twister you fell from the sky and in a twister you shall die,” he yells out. (In the end, the threatening storm only sucks up the Jester and his powerful scepter.)

Flying monkeys are something of a shrieking sharp-clawed threat. But none of them ever really hurt anyone. In fact, quite the opposite. The Jester’s key monkey minion is thumped and bumped repeatedly, and the whole horde is ultimately peppered with candy and gumballs.

When the Jester grabs Lion, Tin Man and Scarecrow, he magically traps them in their worst nightmares—a circus cage, a tank of water, a green-flamed fire, respectively. Their tormentor also drops Toto off a high ledge. (Dorothy catches her pet.)

At worst, this exclamation: “What the devil’s food is going on here?!” Name-calling includes “knucklehead.”

In the single gross-gag in this pic, a gumdrop fire hydrant wriggles away from Toto when the pooch lifts his leg.

At first glance this pic looks much more like a direct-to-DVD tyke trifle than anything approaching feature film fare. But it’s still a little emerald bauble that deserves a second look from moms and dads.

Based on a Wizard of Oz sequel written by Roger S. Baum—the great grandson of original Oz author L. Frank Baum—this is a fun animated yarn voiced by a cavalcade of recognizable stars. Its rambunctious good-vs.-evil tale is populated with kid-friendly marshmallow soldiers and sentient saplings. And even its darker moments are brightened up by Martin Short’s bad-guy-with-a-touch-of-silly delivery.

There are sunny songs to hum along with. Sad moments to sigh over. And a happy ending that exchanges yesterday’s wispy wishes somewhere over a rainbow for a smile-worthy dose of loyal friendship, solid choices and working together for the common good.