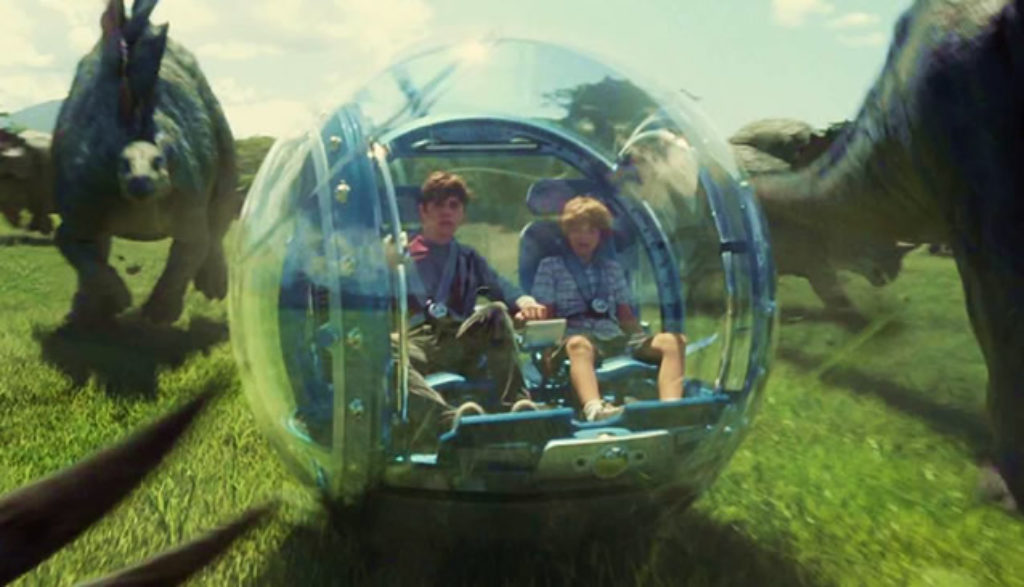 Venture capitalist John Hammond’s dreams of a dinosaur theme park have finally come to fruition. Sure, 20 years ago when the old fella first gave the idea a try, things didn’t go so well. OK, it was a total disaster. But since then the InGen Corp has smoothed out the bumps and wrinkles of that earlier, uh, scaly situation. And if John were still around today, he’d be so proud of how successful his idea has become!

Not only have the InGen labs genetically reconstituted and cloned a cavalcade of fabulous heretofore extinct creatures, they’ve been able to seamlessly incorporate these monsters into a fully functioning vacation spot. Incredible earth-shaking dino attractions and petting zoos mixed with first-class hotel accommodations and shopping! Ah, it’s truly a modern marvel of a destination resort.

In fact, Jurassic World has been running so smoothly that it’s almost become, well, trapped in the amber of its own success. That’s why the park’s investors have been calling for something bigger, faster and scarier to add to the attraction lineup. You know, something with some serious sizzle to keep the public streaming in the front gates.

So the lab boys whipped up a genetically spliced-together super beast that’s a blend of DNA strands from the T. rex, velociraptors and, oh, a bunch of other top-secret sources those science guys are keeping under wraps. The point is, this gigantic terror is an incredible nightmare of a dino. Smart, powerful and fearsome. And sure to be a massive draw.

They call it Indominus rex.

A new enormous attraction, however, just means more hard work for Claire, the park’s administrator. She’s been frantically pulling everything together—from investors to proper facility construction—before revealing this new beastie to the public. It’s a hectic job, but hey, she knows her business and she knows how to make these kinds of things work.

That includes dealing with staff members, like the rugged ex-military guy Owen, who management brought in to care for the raptors and “evaluate patterns of vulnerability.” Owen is raising all kinds of silly questions about the safety and wisdom of genetically creating something like the I. rex. But c’mon, Claire figures, he’s got no clue about the business side of this kind of enterprise. And she’s got no time to talk it over with him.

That company-focused tune, however, changes when the sly Indominus starts developing abilities the lab tests never predicted. And when the giant concoction manages to escape even the most imposing of confines and begins killing everything in sight … well, at that point Claire quickly runs straight to Owen for a real chat about business. Of course, by then, everyone else is running as well.

Claire has two other things to worry over, in the form of her young nephews Zach and Gray. They’ve been sent to the resort over Christmas break while their mom and dad work through some marital problems back home. And though the boys are initially just one more problem for Claire, they eventually become precious connections to family for the single-minded businesswoman.

In the midst of all the new dino-danger, the brothers bond more closely, too. Teen Zach initially shrugs off the possible effects of their parents’ potential divorce, but later stresses the ties of family to his younger sibling. “We’re brothers,” he tells Gray. “And we’ll always come back to each other. No matter what.”

Both Claire and Owen repeatedly risk their lives to save or protect each other and those around them. Owen, for instance, steps bravely in front of a group of raptors in an effort to protect a worker who fell into the predators’ paddock. Owen shows empathy for the “innocents” in the dinosaur kingdom as well. (We see him comfort a wounded brontosaurus until it dies.)

We see a few formfitting, low-cut tops. Owen flirts with/taunts Claire, saying that, like dinosaurs, humans often have a need to eat, hunt and mate. (He makes a motion to indicate the latter, wondering, a bit sarcastically, if she might be able to relate to at least one of those things.) The two do eventually share a kiss.

There are a few moments when the camera glimpses some foliage that’s dripping with blood and/or spattered wall after a mangling monster mash. Or the camera hastily glances away just before a few flesh-ripping kills, leaving us to listen to the crunch and crack.

Indeed, an InGen military guy named Hoskins tells us that “war is a part of nature; everything in this jungle is trying to murder the other.” And we certainly see that play out in thumping, slashing, screeching and roaring style. The gigantic I. rex leaves scores of men and dinosaurs dead in its wake. The camera pans over an entire valley full of dino corpses as Owen realizes the savage creature has been hunting for sport. We see it snatch cowering people off the ground in one gulp, throw some around like toys and stomp others beneath its feet. It chomps and claws at various dinosaurs and gnaws on the whole head of one dino foe. The creature smashes through buildings and picks entire vehicles up in its massive jaws.

Raptors attack and rip at soldiers in a dark forest. And they slash threateningly at Zach and Gray, too. A man holds his hand out in front of him, whereupon a raptor bites his arm up to the elbow before the camera cuts away. A swarm of Pterodactyls swoop in on a large group of people, ripping at them with their talons and hoisting some into the air. One woman is grabbed and fought over—getting tugged to and fro—by the flying dinosaurs before both she and one of her beastly captors are swallowed whole by a huge whale-like Mosasaur.

Soldiers blaze away at their dinosaur foes with rifles and machine guns. One bazooka-like shell knocks a colossal creature right off its feet. A militarized helicopter blazes away before being hit and sent to its exploding destruction. The resort itself is badly battered by a rampage.

Owen punches Hoskins in the face.

Close to half a dozen s-words join three or four uses each of “d–n” and “h—.” “A–” and “b–ch” are trotted out once or twice each. “Oh my god” is exclaimed five or six times; Jesus’ name once.

We see a guy picking up two margaritas at a resort cantina. Owen flirtingly jokes about the craziness of maintaining a diet that doesn’t include tequila.

Early on, Zach is a “typical” obnoxious teen who continually scopes out pretty girls and pushes his younger brother to break the rules. (Though he eventually sees the cost of those choices.) Hoskins talks of militarizing dinosaurs for use in war.

It’s not easy to effectively resurrect a popular movie franchise after it’s languished for a decade and a half. Especially when the iconic pic that started it all was a Steven Spielberg-directed edge-of-your-seat classic that pretty much defined the term “must-see blockbuster” when it released in 1993. But Jurassic World certainly gives the task a Mosasaur-sized, swimming good try.

Things here aren’t quite as sharply drawn and memorable as that first flick. But you still end up enjoying the efforts of a couple of cheer-worthy heroes in the heat of action. You’ll hear solid statements about sticking by your familial loved ones—even when not threatened by a gob full of foot-long razor-sharp teeth. You’ll walk out with an I-can-finally-breathe happy ending. And, of course, you’ll witness an awesome thrill-ride exhibition of some truly incredible giant-reptilian CGI magic.

But speaking of those terrifying teeth, you’ll also see some seriously freaked-out folks being gobbled up whole, squashed by gigantic monster mitts or swept screaming into the air by sharp-clawed creatures in this feature.