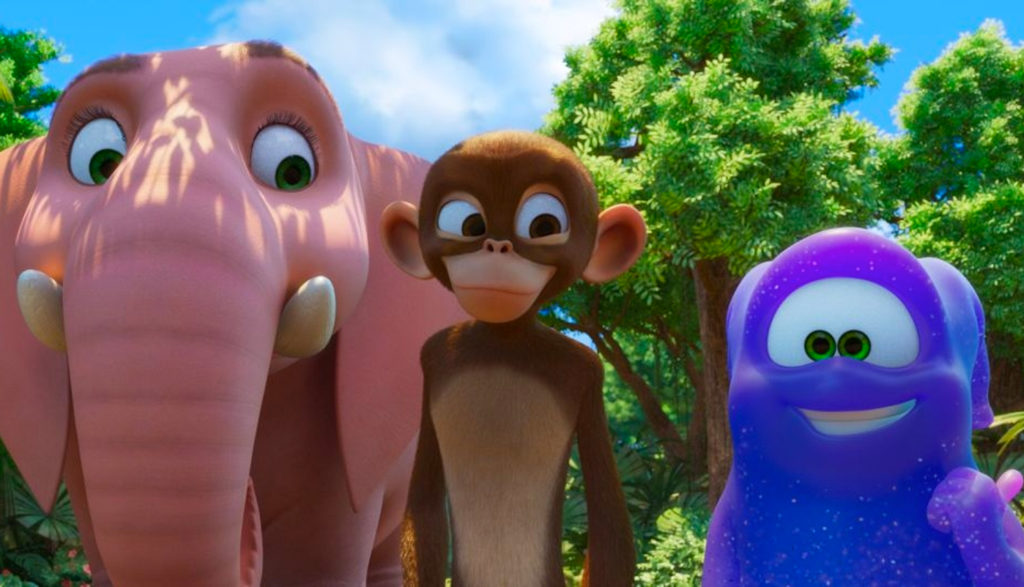 Fneep, an alien from the planet of Scoldron, has just crash-landed in the African jungle. And although his landing was a bit accidental, his mission is not: to conquer the planet and finally win the respect of his people.

And he intends to. Well, kind of. See, Fneep isn’t the conquering sort. Sure, his father, leader of Scoldron, might be. But Fneep is more interested in kindness—a weakness where he’s from.

So, while Fneep would rather stay away from the chaos that comes from invading a planet, an alien’s gotta do what an alien’s gotta do. Until Fneep meets a few animals, that is: Trunk, the elephant; Monki, the monkey; Humph, the porcupine; and Rocky, the rhino. And they’re all bent on befriending Fneep!

If you didn’t know, friendship, love and acceptance make it hard to destroy much of anything. So while Fneep is determined to win the respect of his people, he’s also determined to understand just how crucial it is to truly love those around you.

Monki, Trunk and the other animal friends really go out of their way to show Fneep love and support. They vocalize that support when Fneep is around, as Fneep gives them the ability to talk.  They listen to him, encourage him, compliment him and, most importantly, befriend him. As they extend their friendship, Fneep learns what is to be valued and affirmed just for being himself. This is initially confusing for Fneep because the only way to be valued on his world is to ruthlessly conquer other planets.

Fneep is floored when a mother ostrich hugs her baby. He doesn’t understand what hugs are for. His friends tell him that they make you feel better, show that you’re not alone, and that you’re loved and special.

Fneep learns these important lessons and begins to show others genuine kindness and affection. He tells the leader of a pack of wildebeests that he is in fact a great leader. He also hugs his father and shows him what it is to be loved. In turn, Fneep and his father show their people the same affection they’ve received.

Trunk tells an alien that it is rude to point.

Fneep knows his mission requires the “removal of the Earth creatures” in the “great war of conquest.” He tells his friends that usually when a planet is conquered, there’s “pandemonium all around.” He also tells them a bit about his own planet, how there are “giant flaming death tarantulas” and how they “set the atmosphere on fire.”

A few creatures, including Fneep, get tossed around. A baby egg is nearly crushed.

We hear the word “stupid” once. Someone tries to change Monki’s name to “fluffy bum,” “ear face” and “banana breath.”

Fneep doesn’t really have an interest in conquering any planets, as he is kinder than his fellow Scoldronians. But this is perceived as a weakness amongst his people, and they are quick to shame him, calling him “small” and “insignificant.” His own father, the leader of Scoldron, calls his son “useless.”

A baby ostrich finds out she cannot fly and tells her mother that she’ll just sit “in the depths of despair and disappointment.” A porcupine is constantly grumpy and gets stuck on a rhino’s rear.

Jungle Beat: The Movie is the newest TV-Y7 animated children movie to land on Netflix.

This film features a cute, blueish alien who has never really known love and value until he meets a group of jungle pals who show him what friendship really means. And as kids watch, they see the sweet values of kindness, bravery, justice and acceptance modeled in this story.

Yes, there’s a smidgeon of name calling, aliens who are prepared to blast Earth to smithereens and an occasionally disjointed storyline. But besides these blips, Jungle Beat is sure to touch the heart of families and remind them just how important it is to love others, and how they can do that with something as simple as a hug.