Jane Got a Gun 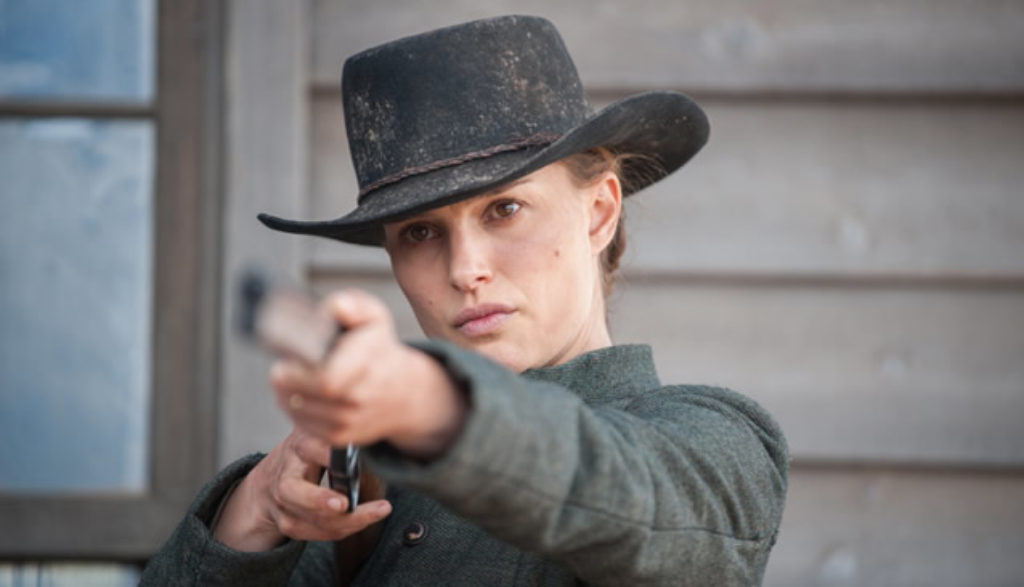 The Old West was never an easy place—and even harder if you believe all those old movies. That was doubly true for a woman, especially one whose husband has just been shot multiple times … and whose assailants are still lookin’ for the both of ’em.

But I’m getting ahead of myself.

Things weren’t always so desperate for Jane Ballard. In fact, it wasn’t that long ago—seven years, to be precise—that it looked as if happily ever after was dawning at the edge of the western horizon (if you’ll forgive the metaphorical mix-up). She’d met a good man, Dan Frost, fallen in love, gotten engaged and gotten pregnant (though she never bothered to share that latter fact with her fiancé). They were all set to travel west to California when the Civil War intervened and Dan felt compelled (despite Jane’s pleading) to serve in the Union army.

So Dan went to war … and didn’t come back.

Wracked with grief, the pretty single mother decided she needed a fresh start out in New Mexico Territory, where it was rumored silver flowed like a river. She soon found someone heading that way, a man named John Bishop, who is reportedly looking to plant a new town.

Naive Jane took John at his word that he would offer her safe passage. But by the time they arrive, it’s painfully clear that he has other plans for her. Plans to permanently “lodge” her in a brothel. Plans that the vulnerable Jane has no power to resist if she wants to provide for her baby daughter, Mary.

But, as often happens in Westerns, Jane’s helped by another man. Bill Hammond, one of Bishop’s lackeys, can’t countenance the fact that Jane’s being forced into prostitution. And when it looks as if Bishop’s ordered one of his gang (and that’s what they are, a gang) to kill little Mary, well, it’s the last straw for a man who’s decided it’s finally time to do the right thing.

Hammond busts Jane out of Bishop’s brothel in a hail of bullets, and, we’re told, the two get hitched. But they’re always looking over their shoulders, always casting a wary eye toward the horizon on the lookout for John Bishop and his perpetually pursuing bullies.

And then Jane finds out that Dan wasn’t dead after all, and that he’d been looking for her for years …

… which is pretty good news for Jane after Bishop’s boys pump her husband full of lead and vow that they’re coming after her to finish the job once and for all.

The concepts of loss and redemption are common in Westerns, and here Jane plows through them as if they were thick prairie topsoil. She’s borne her burdens bravely, and she stoically cares for her wounded husband, telling him she will not leave him alone to die, even when he encourages her to flee. We also see her love for her daughters. (She has another one after marrying Hammond.)

Jane humbles herself in seeking help from her former fiancé, Dan. And he comes to her rescue when she’s nearly raped. From there, Dan helps her plan and fortify her home’s defenses.

Dan tells Jane that it was picturing her in his mind that gave him the “will and purpose” to stay alive in the war and when he was captured. Later he sagely adds, “A man loses his purpose, that’s when a man dies.” And while there is something of a renewed spark between Dan and Jane, she never quits faithfully tending to her husband and hoping he’ll recover.

It may not be the one Jane first dreamed of, but there’s even a happy ending tied onto this tale of woe. It’s an outcome that’s foreshadowed by the movie’s first poignant scene, one in which Jane tells her second daughter a bedtime story that prompts the youngster to ask, “Do good people ever turn bad?” To which her mom hopefully replies, “No, good people never turn bad.”

Passing references (in dialogue and a song) are made to perdition. The song also says that “‘In God We Trust’ won’t go very far” or “stop a bullet.” Dan describes surviving the Civil War as going “to hell and back.”

Dan talks about bedding numerous girls besides Jane. We see him kissing her. And we see Jane kissing Hammond, too.

A naked man plays a piano. (We see his backside.) Gaudily clad prostitutes are shown, as are small paintings of naked women. A paying “customer” lies on top of Jane, who is crying. One of Bishop’s men calls Jane his boss’s “prize whore,” and it’s clear that Bishop sees Jane as his property.

With the implication being that it’s happened before, a man attempts to rape Jane …

… after viciously throwing her to the ground. Jane manages to shoot him, and he’s the first of perhaps 20 to 25 characters who meet their end on the receiving end of one of Jane’s or Dan’s bullets.

One of those is a man Dan shoots several times, dispatching him execution-style with a bullet to the chest. Likewise, Jane shoots a baddie several times before finally capping him in the head. The pair rigs an improvised explosive trench in front of the house, burying bottles of kerosene, shards of glass and nails. Dan ignites it with a gunshot, setting screaming men on fire before they’re gunned down one by one.

Jane and Dan sustain gunshot wounds themselves, of course. We see Jane digging slugs out of her husband’s back, which oozes and bleeds.

When they’re not already shooting, men threaten one another with guns. Bishop tortures a man for information with a wire garrote, which he tightens when he doesn’t get the answers he wants. (It’s implied that the man is choked to death.) We hear talk of hangings, dead bodies, etc.

Characters drink alcohol throughout, and scenes take place in saloons. In the wake of the war and not being able to find Jane, Dan turns to the bottle for solace, frequently sipping from his ever-present flask. Jane medicates her husband with liquor while digging those bullets out of his back. For much of the movie, he keeps a big bottle at his bedside and drinks from it repeatedly.

Some stealing and lying, of course. Dan shows great contempt for Hammond, whom he thinks is a common criminal not worthy of Jane. He crudely suggests that Hammond should just urinate on himself to warm up when he’s cold.

Jane Got a Gun is a strenuous saga of survival with an outcome as unexpectedly upbeat as the rest of the move is stoic, grim and violent.

Jane and Dan had longed for a life of love and laughter together. Alas, for seven very hard years at least, they got the opposite. That has turned both of them into scarred, hardened human beings. Jane tells Dan, “That girl you rode so far to see, I ain’t her no more. Life stopped being something you live … to something you endure.” And for his part, Dan says, “The only point of a battle, Jane, is to end it in your favor. Kill the other guy, otherwise he’ll kill you. … This is not how I pictured life turning out, Jane.”

In a strange, violent way, Dan and Jane both can coldly dispatch Wild West-style “justice” with nary a second thought. And the film passes no judgment on their brutal actions. This movie’s not really even about that, though it’s an important point. The thematic center here is really about coping with deep loss when life pilfers our hopes and dreams. Jane has chosen a better path than Dan, marrying a man who risks his life to rescue her from sexual slavery. Dan, meanwhile, has lost heart and hope altogether, trading both for the bottle.

He finds both of those things again when he comes to Jane’s defense, but even then there’s much bitterness to be sifted through (not to mention flasks of liquor to be sucked down).

That such a hard-edged movie about loss and retribution ends happily only makes the juxtaposition of those thematic extremes feel all the more jarring. Well, maybe not only. I’m glad this story ends in a place of hope and redemption. But a whole lot of bullets find their final resting places in bad guys’ skulls before that riding-off-into-sunset scene finally comes to the rescue.