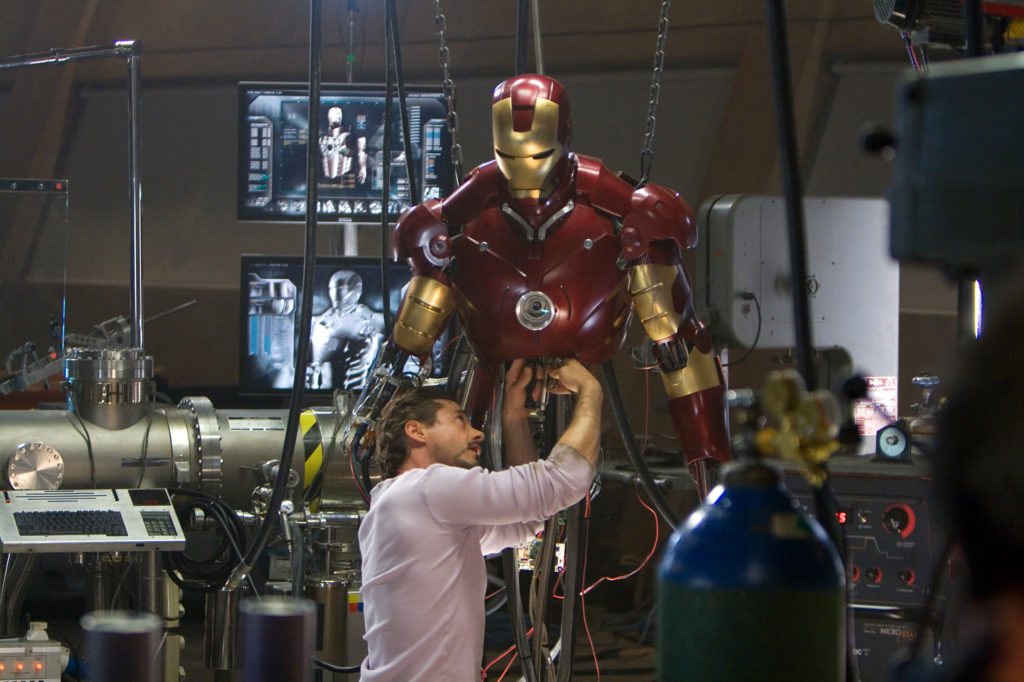 It figures. Just when everything’s going your way, something comes along and messes things up. For some people, it’s an unexpected illness, an overdrawn bank account or a traffic accident one block away from work.

For Tony Stark, it’s being shot at and abducted by terrorists.

Before that happens, Stark’s on top of the world. With more money than Donald Trump and more smarts than the profs at MIT, he can buy anything he wants—houses, cars, women. And if he can’t buy it, he can make it. He can outthink Einstein, outparty Paris Hilton and outspend Bruce Wayne. Stark’s not bothered by the fact that his company, Stark Industries, has created some of the world’s most notable weapons of war. Nor does he lose sleep knowing his palatial Malibu estate was paid for by their sale. In fact, he goes to the Middle East to demonstrate the most powerful non-nuclear munition yet—something called the Jericho Missile.

So there is a certain amount of irony wrapped up in the fact that when Stark’s convoy gets ambushed it’s with weapons from his own company. Stark almost dies in the assault. Then his captors demand that he build a Jericho system for them. It appears that he has no choice but to follow their orders.

Or does he? Instead of using the materials he’s given to make that missile, Stark fashions a nifty suit of armor for himself that facilitates his escape as he creates a mini-Armageddon in the middle of the terrorists’ hideout.

He tells the world that Stark Industries will no longer make its money by selling superior firepower, saying, “I don’t want a body count to be my only legacy.” He also laments, “I had become part of a system that had become comfortable with zero accountability.”

Some of the credit for Stark’s transformation goes to his kind cellmate, Yinsen, who advises him, “Don’t waste your life.” Yinsen values his family deeply. He asks Stark if he has a wife and children, and is saddened to learn he does not. “So, you’re a man who has everything and nothing,” Yinsen tells Stark.

Indeed, Iron Man is an ethical rags-to-riches story in which the morally impoverished Tony Stark finds that true wealth is found in good deeds, not good stock options.

He appears to mourn, very belatedly, the death of his father, whom he never got to say goodbye to. He realizes that loyal assistant Pepper Potts is more than just a very efficient Girl Friday: She’s the only friend he has in the world.

Most importantly, he has a sudden yen to help the very people his weapons have been hurting, so he pours tons of his own money and time into a new superhero suit that’ll help him do just that. Though Pepper protests, he tells her that, in his heart, he knows what he’s doing is right.

Characters are willing to give their lives for others. At least one pays that ultimate price.

Stark’s path to becoming Iron Man is, in many ways, as spiritual as you can get without reciting Bible verses. He is an archetypical woeful sinner who wasted much of his life on wine, women and weapons. While he doesn’t find God, specifically, he does find what he considers a purpose when he has what one might call the Marvel Comics equivalent of the Apostle Paul’s Damascas Road experience. No longer is he blind to what’s going on around him. No longer is his life aimless. He has a reason to live. A calling.

Heightening the parallel, that calling is sustained by a glowing power source close to his heart (a nod to a new soul?) and involves an effective high-tech suit of (spiritual?) armor.

Elsewhere, as a man is bleeding out from a variety of gunshot wounds, he says, “My family is dead. I’m going to see them now.”

Stark is well known as a womanizer, prompting a soldier to ask him whether he’s gone “12 for 12” with the models on last year’s Maxim covers. Stark says he missed one, but since December featured twins, 12 is still the right number. There are a few other innuendoes and sexual comments as well, one of which is a joke about a man mistakenly hooking up with a transvestite. A mistaken identity gag gives a nod to Hugh Hefner.

When a female Vanity Fair reporter asks Stark how he can sleep at night, Stark answers that he’s “prepared to lose a few [hours of sleep] with you.” He does exactly that in the film’s most glaring sexual scene. Briefly, we see them aggressively kissing, grappling and rolling in bed together. (We don’t see any nudity.)

True to its comic book roots, Iron Man is violent and frenetic at times. The opening scene—in which several U.S. soldiers are taken out by explosions and gunfire—may be the most disturbing. One bomb rips through a Humvee, while the vehicle Stark is riding in gets riddled with gunfire. All the soldiers protecting Stark presumably die, and Stark himself is nearly blown up by a mortar round.

He survives, of course. And we see a hazy sequence of him going under the knife while in serious pain. When he wakes up, he has a grotesque device implanted in his chest—a device that Stark upgrades a couple of times and, at one point, has Pepper help him install. Pepper is appalled by both the idea of, and by the actual act of, stuffing her hand inside this unnatural body cavity. “It’s just like Operation,” Stark assures her, then warns her not to let the wires touch the sides. She slips, giving him an electrical shock. When she withdraws her hand, it’s loaded with slime.

As Iron Man, Stark takes out dozens of bad guys via guns, missiles, flamethrowers and sheer brute force. A couple are killed when they open a booby-trapped door. One ends up killing himself by firing at Iron Man: The bullet bounces back and hits his head. Iron Man captures an enemy lieutenant and drops him off in the middle of a bevy of civilians the lieutenant and his men had been torturing. “He’s all yours,” Iron Man solemnly intones before flying off.

A villain immobilizes rivals with a high-pitched tone that also causes their veins to bulge. Stark is tortured. One of the methods used that we see is his head being thrust underwater. His “heart support” is ripped out of his chest. Another man is nearly force-fed a hot coal. Later, after getting shot offscreen, we see that man die. A group of baddies is executed offscreen. And a man is about to be executed in front of his screaming family when Iron Man intervenes.

Iron Man has an intense encounter with a couple of F-22s, and in a separate incident, nearly falls to his death after flying too high. He accidentally bashes himself around while developing the suit. And he doesn’t just endanger himself. His reckless testing puts others at risk too.

Iron Man‘s climactic Transformers-like battle involves lots of action and peril, and several innocent bystanders wreck their cars trying to avoid the mayhem. The battle also leads to the apparent death of one of the combatants.

Jesus’ name is interjected once. God’s name is similarly misused at least a half-dozen times. There are scattered uses of “d–n,” “h—” and “b–ch”; one use each of “pr–k” and the shortened scatological crudity “BS.”

Stark drinks like a dehydrated guppy before his “conversion,” and even takes a drink or two after it. We see all manner of intoxicating beverages consumed—whisky, sake, martinis, etc.—and at one point Stark tells Rhodes that it would be “irresponsible not to drink.” Rhodes at first declines, but we later see him, drink in hand, rather tipsily talking with Stark.

There’s quite a bit of smoking, too. Cigarettes. A cigar. And a pipe—in the hands of Marvel impresario Stan Lee during his standard cameo.

In a gross-out moment, Stark pulls a long tube out of his nose. He shoots craps in a casino. He shows very little regard for traffic laws or public airspace. And he eats a Burger King cheeseburger—inadvisable, you’d think, for anyone with a heart condition that necessitates a glowing motor in an unnatural chest cavity.

Rhodes twists the truth and covers for Stark when it comes to keeping Iron Man a secret (and not shooting him out of the air with missiles).

Iron Man emphasizes loyalty, restitution and the responsible use of power by individuals and nations. But this superhero is not merely a Spider-Man clone. And that has a lot to do with his origin story. No radioactive spider bite. No exposure to gamma rays. Stark isn’t accidentally endowed with new skills. His heroic journey involves an arrogant sinner coming to grips with his own depravity and choosing to change.

So the film’s underlying messages—that being virtuous is better than being rich, that we all have unexpected callings, that we, like Stark, live for a reason—are inspiring, biblical and, in today’s fame-and-fortune-at-any-cost society, downright countercultural. Still, the gold’s buried beneath the surface, and this Iron blade that’s visible could have done with a bit more sharpening. Stark’s road to redemption is littered with bodies and takes several detours by way of questionable, unfortunate decisions and actions.