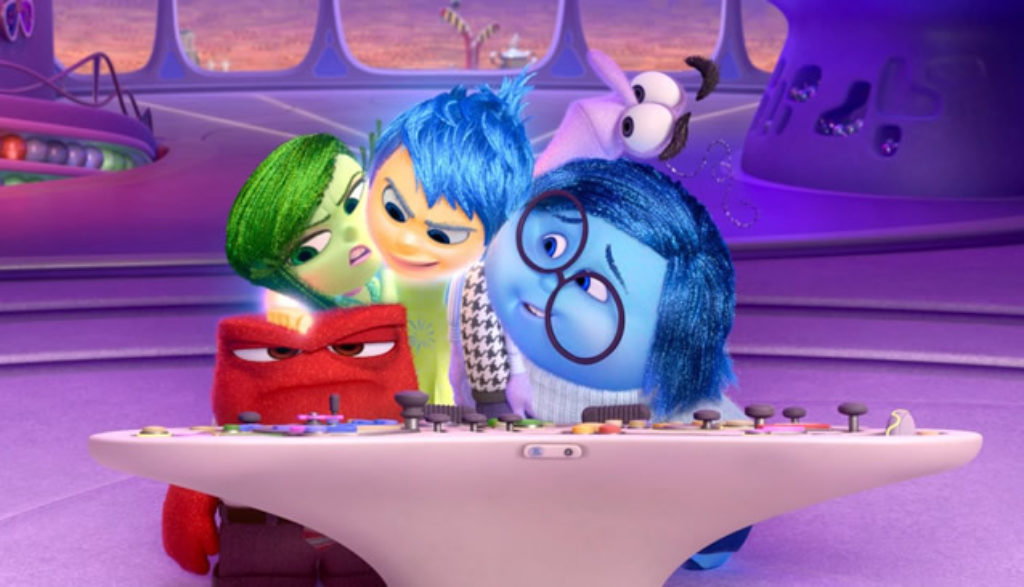 The universe is full of dark matter and black holes, of planets made of diamond and space clouds that smell like raspberries. It is beautiful, terrifying and very, very odd.

But none of that wonder holds a Christmas candle to what goes on in the mind of an 11-year-old girl.

Take Riley—a fun, goofy, hockey-loving kid from Minnesota. Sure, she might not look all that unusual from the outside. But dive into her gray matter and you’ll see towering shelves full of memories and terrifying forests of broccoli in her subconscious, cloud cities forming in her imagination and elaborate dreams taking shape on the soundstage of her psyche.

And above it all, in the control tower, work Riley’s core emotions: Joy, Sadness, Disgust, Anger and Fear. They push buttons and twist knobs and help power Riley through each and every day, making scads of marble-like memories all the while. Most of those marbles are eventually whisked away to long-term memory storage. But a handful stay in the control room. They’re her core memories, moments so critical in Riley’s development that they’ve spawned whole islands of identity. There’s one island dedicated to friends, another to family. There’s Goofball Island, too, and the Island of Hockey, powered by Riley’s memory of her very first goal.

Fortunately, most of Riley’s memories—and all of her core ones—have been happy. That’s Joy’s doing, of course. While Anger, Fear and Disgust all have their places, Joy really keeps the party rocking. She makes sure her youthful charge goes through life with a healthy dose of positivity and ensures that most of those memory marbles have that warm, sunshine-y glow of happiness.

She also does her utmost to make sure Sadness—that blue, bespectacled Eeyore of emotion—doesn’t touch anything. Every time that morose lady plinks a finger on a memory, after all, it turns a deep shade of blue. Frankly, Joy’s a little mystified as to why Sadness is there in the first place. I mean, why would you ever need this Debbie Downer to be a part of your life?

But when Riley’s family uproots from Minnesota and moves all the way to San Francisco, something strange comes over Sadness. Suddenly, she wants to touch everything. And when Sadness takes control of Riley during the girl’s first day at a new school, a forlorn blue memory rolls out … and heads straight for the core memory bank.

Well, Joy certainly can’t have that cornflower-colored recollection miring Riley’s core memories. She grasps for the memory and tries to keep it out—but in so doing, she, Sadness and, most critically, the rest of Riley’s core memories are suddenly sucked out of the control tower and thrown into the great wide world of Riley’s fertile mind.

Riley’s instantly lost without her core memories—unsure of who she is or what she values anymore. Anger, Fear and Disgust are alone in the tower. And unless Joy can find a way back somehow—taking Sadness with her, if she must—Riley’s gonna get pretty cranky.

“OK,” Sadness moans. “I’m positive you’ll get lost in there.”

Wow. Where to begin?

First, let’s talk about Riley. When she’s herself—core memories intact and her full gamut of emotions in control—she’s a delightful girl, the apple of her loving parents’ collective eye. And even though Mom and Dad are seriously stressed over the move, Riley does what she can to keep her own spirits up, for their sake as much as for hers.

When Joy is sucked out of the control tower, though, it becomes impossible for Riley to do much but sulk and cower and occasionally blow up. And while that’s not good in and of itself, it’s a fantastic depiction of what kids feel (and adults, too) when they’re under a lot of stress. When you’re 11 and your whole world has changed, your inner world is shaken, too. And we learn here that our emotions, even ones that might seem, on the surface, “bad,” can help stabilize things.

Riley’s parents don’t understand what’s going on with their suddenly sullen daughter, but they want to help. And so they do—through love and patience and understanding. It’s pretty obvious that Mom and Dad are great (though not always perfect) parents, and Riley, eventually, sees them as such. That means Inside Out isn’t content to depict how awful things can get when our lives take a sudden downward turn. No, it also wants to show us how important family can be in the process of picking yourself up and moving on.

There’s just as much concern for Riley’s well-being inside her head as outside. All of Riley’s emotions want her to be healthy and happy—even Sadness, who sometimes feels like she just messes everything up. And there are entities running around in Riley’s brain who sacrifice everything to get her back on an even keel.

The concepts in Inside Out parallel without explicitly referencing biblical concepts related to joy vs. happiness, as well as our calling to fully experience all of life, not just the parts that are pretty. See Matthew 11, for instance. (I’ll deal more with this in the Conclusion.)

Riley is nearing puberty, and she imagines herself with a boyfriend who says, ever so dramatically, “I would die for Riley!” Riley talks to a boy, and we watch the boy’s internal brain controllers freak out over the interaction. When angry with Dad, Riley’s Mom recalls a Brazilian pilot who once asked her to run away with him. Her emotions sigh heavily when the hairy-chested memory is brought up.

Joy and Sadness, stumbling on a Hollywood back lot-like area that creates Riley’s nighttime dreams, crash the girl’s current dream by masquerading as a cheerful little dog. But when the dog costume rips apart, Riley sees it as a real dog getting suddenly cut in half, with both halves still cavorting about. A dead mouse also haunts Riley’s dreams.

A creature disappears from Riley’s mind bit by bit, slowly forgotten. Two cloud people poof out of existence. Riley’s “train of thought” derails, sending Joy, Sadness and others flying. Imaginary entities fall off a cliff and into Riley’s forgetful realm. Joy, Sadness and others fall at times (but don’t seem to get hurt). Joy, Sadness and Riley’s one-time imaginary friend Bing Bong suffer some severe bodily distortions when they try to cross a plain of abstract thought.

When things begin to go wrong in Riley’s life, Anger says, “Can I use that curse word I know? It’s a good one!” Indeed, Anger is excited about the prospect of having a wider array of curse words to employ once Riley gets older. But the closest thing to a profanity we actually hear is “heck.”

This isn’t exactly negative, but it’s an element that really should be brought up considering the very young age of the film’s target audience. Inside Out has some pretty sad, emotional moments in it. I heard a couple of kids crying during the screening I attended, heartbroken over what they were seeing and experiencing. These sad sections are critical to the story’s development—indeed, sadness lies at the heart of this flick—but it’s something to be aware of, particularly with sensitive kids.

[Spoiler Warning] When Riley’s at her lowest and still without her core memories, her remaining emotions decide to plant an idea in her brain about running away (back to Minnesota) in order to make new memories. This certainly isn’t presented as a positive, but we still see Riley steal her mother’s credit card (to buy a bus ticket) and sneak out of the house.

Riley, as a toddler, escapes a bathtub and waves her bare keister at her dad. One of Riley’s emotions, exasperated, says that her parents are stupid. There’s a reference to a burgeoning interest in vampires.

Who else would dare make a kids’ movie featuring an octogenarian as its primary hero (Up)? Or challenge children with a movie that, at first, exudes the vibe of an old-time silent movie (WALL-E)? Or otherwise create “cartoons” that meditate so profoundly on the themes of loss and grief, of friendship and family, of the bittersweet joys of growing up? The now-Disney-owned studio has churned out an almost unbroken chain of classics over the last 20 years—influencing Disney’s own storytelling in the process—and knows better than anyone else how to make kids laugh and parents cry.

I can’t claim that Inside Out is the best yet—not with the bar already so high. But I do think it’s Pixar’s most ambitious movie, and that’s saying something.

Getting into the mind of an 11-year-old girl is a daunting task, and director Pete Docter (who also directed Up and Monsters, Inc.) actually went so far as bringing in psychologists to help with the particulars. He and his moviemaking team also fleshed out a message that feels truly countercultural: Happiness isn’t everything.

Our age values happiness a great deal. We’re supposed to be happy, jettisoning anything and everything that makes us unhappy: spouses, careers, obligations, our own identities, you name it. If we’re happy, that’s all that matters, we tell ourselves. And if we’re not happy, well, that means something’s wrong.

I’m not trying to flip the whole equation on its head or, say, turn it inside out. There’s nothing evil about happiness, of course. We want to be happy. We want our kids to be happy. We root for Riley to find her happiness again, and we’re with Joy when she pulls out all the stops to make the girl feel a little extra glee. It feels right, at first, that Sadness gets shuffled off to the side. After all, whenever she touches something, she corrupts Riley’s bright yellow memories and turns them blue and bad.

“I keep making mistakes like that!” Sadness wails. “I’m awful.”

But by the time Inside Out finishes, we realize that Sadness isn’t the villain. She’s the hero. She allows Riley to grieve over the losses she’s sustained in her big move/life change and, eventually, move on and change for the better.

What a brave message that is—that our goal isn’t to be happy all the time. We’re supposed to be … us. We’re supposed to experience life in its wholeness, even in its sadness. Happy smiles don’t get us all the way there. Running clear of anything that might potentially upset us doesn’t either. Sometimes we need to be sad. And that sadness—indeed, all of those prickly emotions we see in Inside Out—can be catalysts for a much deeper joy down the line.