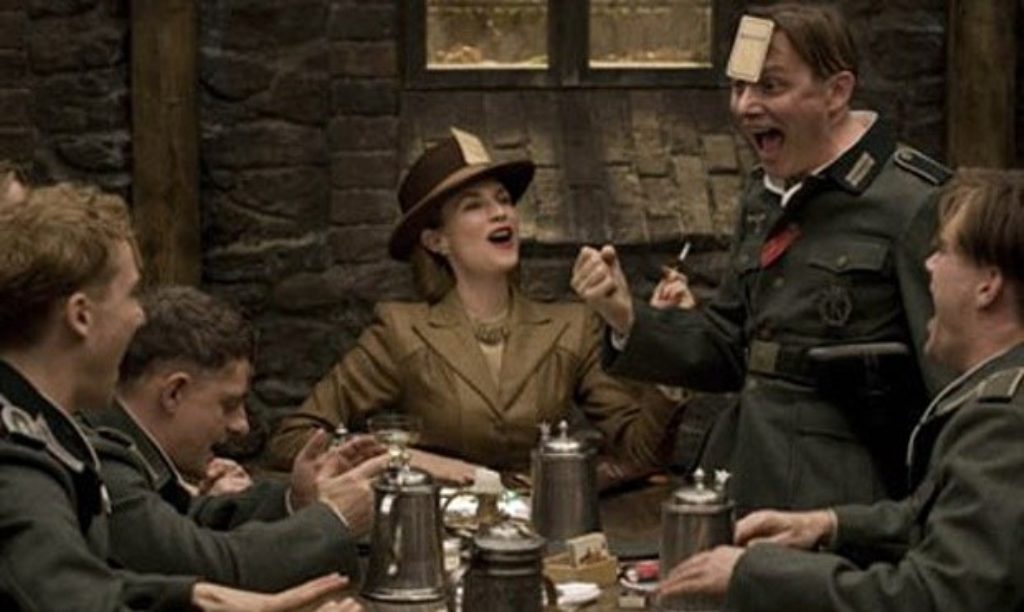 Director Quentin Tarantino has built his career on the fusion of outlandish narratives, highly stylized violence and comedy noir. And as he turns his camera’s lens toward the subject of World War II, all three of those signature cinematic elements are present in a dark fable about a persecuted people’s retribution.

Loosely inspired by Enzo Castellari’s 1978 Italian film, Inglourious Basterds sprawls across 2 1/2 hours of screen time as it weaves together two storylines destined for a fiery collision in the finale. It focuses first on the fate of Shosanna Dreyfus. She’s the sole survivor from a family of fugitive Jews massacred by a cunning Nazi SS officer, Col. Hans Landa. Three years after that tragic day, Shosanna keeps a low profile running a movie theater in Paris. Her efforts to avoid Nazi attention, however, are complicated when she attracts the eye of Nazi war hero Pvt. Frederick Zoller.

Pvt. Zoller is so famous that Hitler’s propaganda minister, Joseph Goebbels, has decided to premiere a feature film about him at Shosanna’s theater—and Hitler himself is on the guest list. Little does anyone know that Dreyfus is plotting how she might assassinate Hitler and his entire high command.

And she’s not the only one entertaining the idea.

Spliced throughout Shosanna’s story is the tale of the so-called “Inglourious Basterds,” a sort of proto-special forces team of nine Jewish American soldiers operating behind enemy lines in France. One primary goal drives them: Kill as many German soldiers as possible. But their leader, Lt. Aldo Raine, wants to do more than inflict casualties. He wants to inflict fear. Self-consciously imitating the Apaches, he commands each man in his “bushwhacking guerilla army” to scalp—that’s right, scalp—100 dead soldiers.

When this brutal band of Jewish brothers gets word via a British espionage team that der Führer himself is coming to town for a night at the movies, well, you can imagine the response. Compared to these guys, Pavlov’s dogs merely twitched a bit when the bell rang.

All of the film’s protagonists—Shosanna and her co-worker at the theater, Lt. Raine and his team, British officers, and a German actress turned double agent—risk their lives to topple Hitler’s evil regime. Most of them sacrifice themselves in the process.

While watching the movie about his heroic wartime efforts, Pvt. Zoller has such a hard time seeing himself shoot enemies (he’s a sniper in a bell tower who killed almost 300 Americans) that he leaves the theater.

A brief scene graphically pictures Joseph Goebbels having sex with his assistant. (No explicit nudity is shown.) An actress wears a cleavage-revealing dress. Waitresses at the movie premiere wear skimpy outfits that reveal a lot of cleavage and leg.

Lt. Raine models his approach to the Germans on that of the “Apache resistance,” urging his men to leave the enemy “disemboweled, dismembered, disfigured.” To that end, two scenes picture excruciatingly graphic scalpings of dead men.

Equally disturbing is a sequence in which Lt. Raine unleashes Sgt. Donny Donowitz, who’s known as the “Bear Jew,” on a German officer who won’t divulge information. Donowitz takes sadistic glee in punishing the captured German, brutally beating him to a pulp with a baseball bat. (We see a lot of it, including a horrific head shot.) Before the beatdown commences, Raine thanks the German officer for not cooperating, saying, “Quite frankly, Werner, Donny beating Nazis to death is as close as we ever get to going to the movies.” He’s not kidding. When another captured German is shot prematurely, the team is disappointed that they didn’t get to watch Donny do his dirty work.

Lt. Raine essentially tortures a double agent (in an attempt to discern her loyalty) by putting a finger in a gunshot wound in her leg and twisting it as she writhes in pain. Swastikas are carved into the foreheads of two other German victims; we see the second such cutting in gruesome detail.

Two American soldiers fire their machine guns into a throng of Nazi officers. Explosions finish off those who survive the bullets. Col. Landa orders his SS underlings to open fire on a family of Jews hiding beneath a house’s floor. He also chokes a woman to death with his bare hands.

A man has his throat slit. Another gets smothered with a pillow, then stabbed with a knife. Still another is garroted. Characters put guns to each other’s crotches right before bullets start flying and everyone in the room is killed. Several scenes involve automatic weapon firefights that leave many people dead. Dead bodies fall from windows.

Hitler says that he wants the bodies of Lt. Raine’s soldiers hung naked in the streets and then thrown in the sewer. During the screening of the film about Pvt. Zoller, Hitler and other Nazi brass laugh uproariously at the Americans being shot and killed. When one of Lt. Raine’s men finally guns down Hitler, he empties a clip into the German leader’s face, rendering it unrecognizable and (obviously) covered with blood.

About two dozen f-words and half-a-dozen s-words. God’s name is taken in vain close to 10 times; five times it’s paired with “d–n.” Milder profanities include “a–,” “h—,” “b–ch” and “b–tard.” There are a couple of crude verbal references to the male anatomy.

Wine. Whiskey. Beer. Champagne. Schnapps. All of that and more is consumed throughout the film. Moonshine is mentioned. An extended scene takes place in a bar where several German soldiers are visibly drunk.

Cigarettes. Cigars. Pipes. Just about everyone smokes. And Lt. Raine snorts some sort of (unidentified) substance.

A French farmer hiding Shosanna’s family tearfully gives them up when Col. Landa makes a veiled threat against the man’s three daughters. Landa, whose nickname is the “Jew Hunter,” compares Jews to rats. Several other Germans make racist and derogatory statements about Jews and blacks.

Col. Landa is aware of Lt. Raine’s plot to kill Hitler. Instead of stopping it, he bargains with Allied officials to make it look as if the death of Hitler and other Nazis was his plan all along. He also issues a long list of demands to be met in exchange for essentially allowing the Third Reich to be brought down. Lt. Raine doesn’t care much for the deal, so he carves a swastika in Landa’s forehead.

“Once upon a time in Nazi-occupied France …”

Those opening words aptly set the stage for Inglourious Basterds, essentially a retribution fantasy in which determined, vengeful Jews manage to rewrite history.

In some ways, Quentin Tarantino’s latest is pretty much what I expected. Graphic violence paired with dark humor is his trademark, and there’s plenty of that here. In other ways, though, it comes as a bit of a surprise: Brad Pitt’s portrayal of Lt. Aldo Raine is one-dimensional, and at times it brought to mind Bob Crane’s TV sitcom Hogan’s Heroes—of all things. Not that Col. Klink ever got scalped! And Hogan never dropped the f-bomb.

Kim Masters, who, on The Daily Beast, writes about her own Jewish father who served in World War II, comparing his real-life exploits to those of Pitt and Co.: “[My father] belonged to a secret unit made up of refugees from the Nazis. They went on reconnaissance missions in enemy territory; they stormed the beaches of Normandy on D-Day; they shot at, blew up, captured and interrogated German soldiers. They didn’t take scalps or carve swastikas into anybody’s forehead.”

I’m tempted to leave it at that. But there’s something crawling underneath this movie’s inglourious skin that deserves at least a paragraph or two more: Shosanna’s story, in contrast to Aldo Raine’s, packs deeper emotional resonance. Where Pitt’s portrayal of a bloodthirsty soldier is ridiculously over the top, Shosanna feels, well, human in comparison. Here’s a woman who watched her family get mercilessly gunned down by Nazis. And, despite her best efforts to fade into the woodwork, she’s presented with an opportunity to topple the regime that’s brought her so much pain.

What would you do?

Shosanna jumps at her chance to put an end to the wickedness that’s taken everything from her.

Mingled amid the cartoonish and bloody moments, then, is a serious question: Do people who commit unthinkably heinous acts still deserve refuge from revenge? Lt. Raine spells out his answer in scalps: “The Nazis ain’t got no humanity,” he says. That mindset—the same one the Nazis have when it comes to the Jews—enables him to do brutal things to captured Germans.

As for Shosanna, she states her position with equal clarity in a short film inserted into the movie Hitler and his men see. Just before a co-worker sets the theater on fire, an image of her face appears onscreen, saying, “My name is Shosanna Dreyfus. This is the face of Jewish vengeance.”

Is a violent response to violence ever justified? Inside the context of war? Outside it? It’s a question well worth wrestling with—just don’t expect Mr. Tarantino to do it onscreen. His answer is anything but nuanced. Somehow ragged scalps and nuance just don’t get along very well.