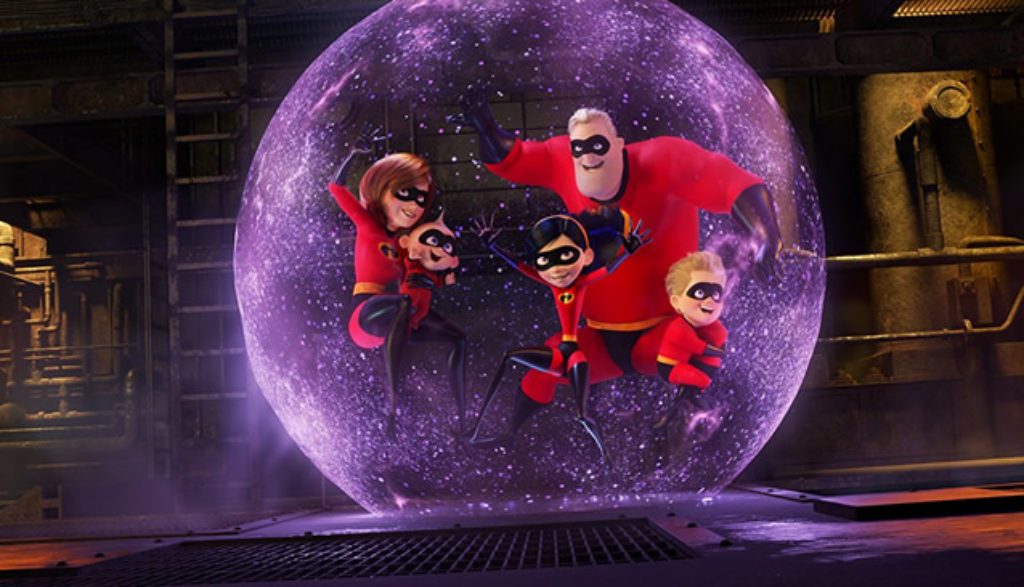 Yes, admittedly they may have the best of intentions. But every time they do battle with a bad ‘un, collapsing buildings are sure to follow. Superman and Zod destroy half of Metropolis in Man of Steel. The Avengers defeated Ultron in Sokovia, but they don’t exactly leave the city better than they found it. Why, the only folks who unreservedly love superheroes these days are insurance adjusters.

The Parr family knows all about the prejudice against superheroes. Never mind that they conquered the evil Syndrome (as chronicled in the gritty documentary The Incredibles). No matter that they just stopped a new felonious evildoer, Underminer, in his subterranean tracks: “Supers” are still illegal. And, frankly, the politicians wish they would’ve left well enough—and the Underminer—alone. Bob and Helen (once the beloved Mr. Incredible and Elastigirl) along with their supercharged progeny (Violet, Dash and baby Jack-Jack) still aren’t allowed to use their superpowers. It’s all right there in the book: section 27, paragraph 32, line c or thereabouts.

Winston believes that these days, superheroes need to be more than pure of heart and strong of muscle. They need a good PR campaign, too. For way too long, superheroes have done their hero thing and slipped back into the night without a word, capes a-flapping: No flattering Instagram posts, no clever Twitter bon mots, nothing. All the public sees is the destruction heroes leave in their wake. They don’t see the heroes behind it and what made the destruction necessary. No wonder they’re not so popular these days.

Winston meets with Bob, Helen, and their friend Lucius, aka Frozone, suggesting an all-out media blitz. He wants to reintroduce Elastigirl to the world—and this time, her costume will come with a tiny camera (created by Winston’s sister, Evelyn) to show the world her derring-do. When it sees all the good that Elastigirl does, all those anti-super laws will collapse like an evil lair made of balsa wood. And the Parr family will be allowed to use its powers freely again.

‘Course, that plan comes with a dollop of irony: “To fix the law, I gotta break it,” Helen says. And to help her family, she’ll have to leave it for a while—leaving Bob, that big galoot who typically solves problems by punching them, in charge.

That’s right: While Elastigirl swings into action to fight the Screen Slaver (a terrible new villain who, you might’ve guessed, can control people via their screens) Bob’s at home, taking care of the kids—helping Dash with homework, trying to lift Violet’s weighty spirits and somehow, somehow keeping baby Jack-Jack under control. How much trouble could a little baby be? Well, given that Jack-Jack has more outlandish powers than a certain caped resident of Metropolis, quite a bit. One little temper tantrum just might destroy a city block.

Yep, superheroes are messy. Especially if they don’t have full control over their super bodily functions just yet.

Incredibles 2 obviously has its share of standard superhero heroics. Helen’s Elastigirl takes center stage this time around, stopping runaway trains and saving citizens aplenty. In fact, she really prides herself on her ability to save the day without too much collateral damage, one of the reasons Winston chose her, not the more reckless Mr. Incredible, as the face for his super marketing push. She even makes a superhuman effort to safeguard the lives of villains. That’s praiseworthy indeed.

Lots of other superheroes, including every member of the Parr family, get involved, too—and that’s great. But Incredibles 2 has a deeper message it wants to convey: That parenting itself is one of the most heroic acts that anyone can engage in.

While Helen revels in being a costumed crimefighter again, Bob struggles with being sidelined. Elastigirl is awash in accolades; Mr. Incredible is awash in dirty diapers. It’s tough work, as every parent knows. But he does his best and embraces the challenge with gusto, finding moments of satisfaction along the way. “I’ve got to succeed so she can succeed so we can succeed,” he says.

“Done properly, [parenting] is a heroic act,” designer Edna Mode intones. But no parent can do it alone. Even the most capable, dedicated dad needs a little help sometimes. So Bob finds a much-needed babysitter that allows him some much-needed rest. And when Violet sees just how hard her father’s been working for the family’s sake, she offers a little help and support, too.

Incredibles 2 also makes some feints toward deeper themes as well. When Helen and Bob argue over the ethics of following obviously unjust laws, the film doesn’t offer a clear answer as much as it encourages some deeper thought. And, of course, the Screen Slaver’s mode of control—sucking the will out of victims via television, computer and smart phone—serves as a cautionary message for our own screen-obsessed age, an endearing theme for any self-respecting Plugged In reviewer.

Some characters’ powers have a bit of a supernatural slant to them: One hero plays with physics itself, creating extradimensional holes that will look familiar to anyone who’s ever played a Portal game.

But we should take special note of one of Jack-Jack’s superpowers: When he gets really put out, he transforms into an actual demon-baby, complete with horns and red skin and the ability to breathe fire. I doubt that Jack-Jack has any connection to fiery Gehenna or its denizens, but the imagery is nevertheless striking.

When Violet leaves a room in a huff, Dash turns to father Bob and asks, “Is she having adolescence?” Indeed she is—with all the emotional turmoil that accompanies it—due to a complicated (but innocent) crush on a kid named Tony Rydinger.

Massive vehicles, from a subterranean drill to a runaway monorail to a huge seagoing ship, imperil lots of people (and do sometimes cause significant property damage). Superheroes sometimes sweep people out of the way of danger or, in one case, actually push them out of a helicopter (into a body of water below). Superheroes engage in frenetic fights with villains and other enslaved superheroes: People get slugged and kicked and slammed into walls. One guy tries to crush another with (literally) tons of metal. Good guys strain their muscles and powers to the limit to put the brakes on out-of-control machines. Elastigirl’s ability comes from stretching her body into some pretty outlandish shapes (including a couple of times, flattening herself out to form a parachute): She doesn’t seem to be in pain, but I found myself thinking, That can’t be all that comfortable.

Jack-Jack’s first archnemesis proves to be a raccoon: In trying to stop the critter’s invasion of the family trash can, Jack-Jack unleashes a variety of weapons, including lasers that shoot out of his eyes (and cut down the umbrella that the raccoon is clinging to). The two wrassle out in the yard, too, though neither seems to be particularly damaged.

An intense scene in a dark, creepy room includes some jumpy moments that won’t bother adults or older kids, but might frighten or startle younger viewers.

The Parrs stay at a posh, neo-modern house festooned with neato-keano accoutrements launched with a button push or two. Dash gets a little overzealous, sending furniture and, briefly, his dad, into pools of water that just opened up. He and Bob also play with the remote control for Mr. Incredible’s old, souped-up car: The vehicle, though, is owned by another man, and when the car starts vrooming around and prepares to launch some (presumably lethal) rockets, the owner becomes understandably worried. (Dash eventually “borrows” the car for some do-gooding, and the vehicle’s ejector seats catapult him and Violet to where they need to go.)

In flashback, we learn that Winston and Evelyn’s father was killed by criminals. We see the crooks walk in on the man (nervously dialing a no-longer-manned superhero hotline), but don’t see the actual, lethal assault. Characters also brandish cartoon guns at times.

Incredibles 2 is hardly a profane mess, but it does contain one use each of “d–n,” “h—” and “crap.” There are at least two misuses of God’s name as well as one utterance of “oh Lord.” We also hear the crudity “sucked.” Two other unfinished phrases may suggest harsher profanities.

Helen and others drink wine and cocktails at parties and the like.

As mentioned, Elastigirl’s heroics are technically forbidden—an irony not lost on Violet. “So Mom’s going out illegally to explain why she shouldn’t be illegal,” she says. Dash also commandeers (as mentioned) someone else’s car. (And it should be noted that he’s nowhere near old enough to drive it, whether he’s doing so by remote control or not.)

One would-be superhero—an elderly gentleman—calls himself Reflux Man, and his superpower consists of belching fire. Jack-Jack spews fire, too, but we also see him sully a diaper. (A quick snippet also shows Violet and Dash changing a bare-bottomed Jack-Jack.) Shocked while taking a drink, water spews out of Violet’s nose.

An advertisement for an oven plays on male stereotypes by exclaiming, “So easy, even a man could do it.”

Who’s the hero? The costumed crime fighter who saves innocents, stops runaway trains and bops the bad guy in the nose? Or the stay-at-home parent who loses sleep to help his son with his homework?

For most of its history, Pixar has eschewed predictable answers and knee-jerk endings for things deeper. Themes more resonant. More responsible. Other movies might suggest pursuing happiness. In Inside Out, Pixar insisted that sadness is a critical part of life, too. Most movies might revel in the freedom that comes with growing up. With Pixar’s Brave, it’s more about responsibility. The studio eschews easy answers for something deeper. More difficult. Often, more responsible. And somehow they’re still able to make movies that are beautifully fun.

Admittedly, Incredibles 2 isn’t always responsible itself. It engages in a bit of bad language; takes a sip or two of alcohol; and, of course, wallows in plenty of bloodless animated violence. Moreover, our heroes break the law in their quest to do what’s right, and we should ponder that paradox, too.

But the movie wants us to consider it. In fact, I think it wants us to think about dozens of themes here: justice and acceptance, the changing role of women, the influence of media, the oft-thankless job of parenting, jealousy, insecurity. As fun as Incredibles 2 is (and it is), as excellent aesthetically as it may be (and it is that, too), Pixar once again encourages us to go deeper as we laugh and marvel and cringe and smile. It encourages older viewers to consider some of its ethical conundrums even as, like Dash, it sprints by them. And it asks its younger fans to reconsider the heroes in their own lives—the same folks who likely bought them movie tickets.

Incredibles 2 doesn’t match the majesty of Up or the profundity of Inside Out. But I think a lot of people will enjoy this movie more. It’s funny and smart, thrilling and sweet. Moreover, like any flick worth its price of admission, it may make you look at your own world just a little bit differently—and the people we find and love therein.