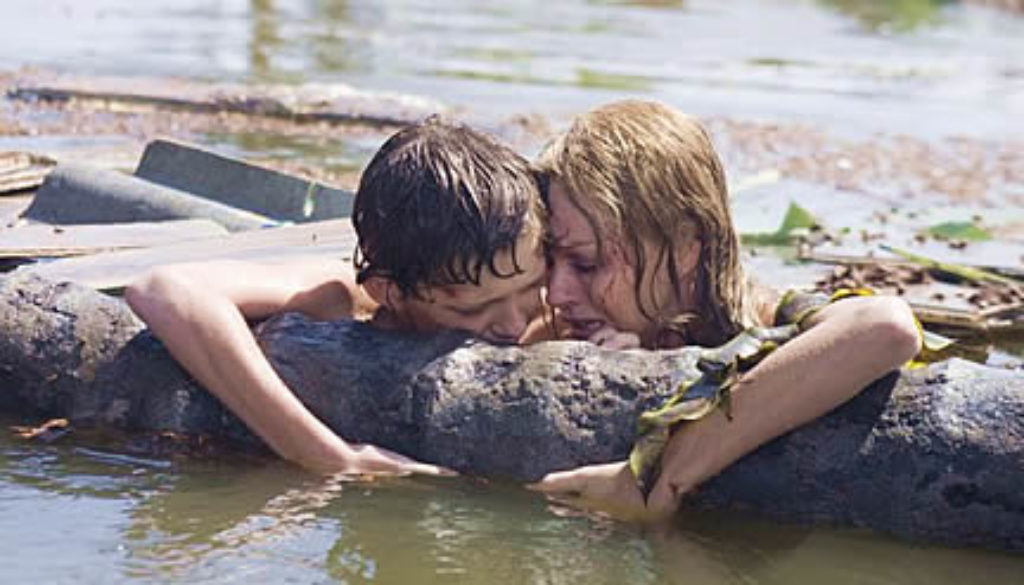 The Bennetts need a vacation. And while you may not think of a beach getaway in Thailand as the perfect setting for Christmas break, Henry is hoping it’ll prove to be a good choice.

He, his wife, Maria, and their three boys have been living in Japan for a while now, thanks to his job. But with a shake-up looming at the office, things could be changing in not-so-great ways. And eldest son Lucas has been going through that early teen angst period. So getting away and frolicking in the sun and surf for a week might just let them all unwind a little.

The first two days are great. The Khao Lak resort is brand-new and spotless. They spend Christmas Eve on the beach. They share great food that night. They launch floating lanterns into the evening breeze.

The 26th of December, however, starts off with a little something odd. A strange rumbling sound. The wind changes suddenly. The island birds start going crazy. What’s this all about? From their spots around the hotel pool everything looks fine.

But why are the palm trees shaking like that? Henry and the little ones stop their splashing in the wading pool and look up. Is that tree tumbling over sideways? Is the—

A 90-foot wave roars in from the ocean. It crests the pool area wall. And Henry and Maria both start screaming for the boys … just before everything is obliterated.

The Bennetts are washed away, along with thousands of others on the island. They’re left battered and bloodied by the raging waters. The first of the clan we see pop up from the murky depths is Maria … and she immediately throws herself into danger to rescue Lucas, who she sees floating by on the surging tide. Then the two of them struggle to keep each other alive as they tumble and bob.

When they finally make it out of the debris-choked flow, Maria has sustained some pretty severe wounds. But despite her condition, she urges her son to help a young boy they hear crying from under some wreckage. Lucas refuses at first to risk being out in the open in case another wave hits. But Maria tells him that they must, “Even if it’s the last thing we do.”

Those panicked moments set up the story’s central self-sacrificial theme. We see scores of complete strangers doing whatever they can to help and comfort those in need. And the young boy’s rescue ultimately teaches Lucas a vital lesson about the value of life and sacrifice that impacts him deeply.

At one point in an overcrowded hospital, a suffering Maria urges Lucas to go out and help others rather than just sitting by her side. So he sets out to try to reconnect kids and their parents. Henry applies that same forward-driving self-sacrificial attitude in trying to find his lost family members. He refuses to stop looking even though it means putting himself in difficult and dangerous situations. He tells his young son, “The most scary bit for me was when I came up and I was all alone. And then I saw the two of you, I didn’t feel so scared anymore.”

Even before the incredibly destructive natural disaster hits, it’s evident that Henry and Maria love their boys dearly. Henry is always ready to roughhouse and play at a moment’s notice. And after the tsunami it’s clear that both parents would readily die to save their kids or each other. Their love and devotion is fully reciprocated: When Maria is hampered by her wounds, young Lucas strains to help her climb to safety. Even 7-year-old Thomas steps up to protect and comfort his younger sibling when they’re by themselves.

The Bennetts enjoy Christmas morning together, though there’s no apparent connection to the spiritual side of the holiday.

Always in nonsexual contexts we several times see Maria’s bare breasts. First it’s a brief side view as she’s dressing. Then, after the flood, she and Lucas are climbing out of the water and her tank top has been tattered by the buffeting debris, exposing her chest. Lucas quickly turns away, saying, “I can’t see you like this.” (The camera sees and then pulls away too.) A terribly embarrassed Maria ties her shirt together as best she can, and some women later offer her better covering. When they make it to the hospital a doctor starts cutting her clothing away to repair the massive wound on her chest, and again Lucas must turn away from his mother’s nakedness that moviegoers also see.

Lucas spots a fully nude man walking beside the road as the truck he’s riding in buzzes quickly by. (We can tell he’s naked, but the bouncing camera obscures the details.)

Before and after the tsunami, men and women wear various pieces of swimwear; some of the women have on bikinis. A stray joke alludes to hippies all sleeping in the same bed … “just like your old college days.”

The tsunami’s impact on the island is truly devastating, and the movie depicts it very realistically. People are tossed about and slammed into solid objects by the churning waters. Scores of dead bodies float underwater. More corpses lay facedown in the mud or along the side of the road. We see a pickup truck packed with corpses stacked like cord wood. Henry searches through body bag after body bag for his family.

In the hospital we’re shown hundreds of injured people. Some sport badly broken, torn and twisted limbs. The rooms are crammed full, many with the floors and walls splattered with blood and filth. A female patient vomits blood. And Maria gags on a long stringy object that she pulls from her throat.

That’s the least of Maria’s worries, though; her wounds are the most gruesome we see up close. When she finally rises out of the water with Lucas we can see a large gouge in her upper torso, along with numerous bloody scrapes and slashes over most of her body and face. One of her eyes is badly bruised and bloodied, and it nearly swells shut. A ripped open cut in her upper thigh shows that a slab of skin and muscle has been cut out and left dangling from the profusely bleeding wound. She wraps this injury with a dirty cloth and trails blood until she can no longer carry her own weight.

Later, in a flashback, we see how Maria received all that terrible damage as we watch the flood waters smash her through a glass wall and then tumble her savagely over and through flesh-tearing branches, broken masonry and other underwater debris.

Henry has quite a few scrapes, cuts and bruises as well, including a hemorrhaged pupil. We don’t see him get hurt, except for when he takes a crashing fall while searching for his wife. He then drags himself up from the offending hole, covered in blood. Henry and Maria both cry out in agony at times.

A car floats by, and we hear a screaming baby’s cry echo out from the vehicle’s interior. Long aerial camera shots reveal just how demolished the populated parts of the island are.

We hear “h-ll” three times in an emotionally overwhelming sequence when mother and son are reunited.

The Bennetts’ hotel room refrigerator is stocked with soda and beer. Henry and Maria talk of sharing a glass of wine after the kids go to bed.

What do you do when all the little expected things of life are ripped away from you? When the laptops and expensive shoes, sibling squabbles and job worries are all crushed beneath a tidal wave and your life is left hanging by a thread? What’s really important then? What do you reach for?

Those are the questions The Impossible—a movie based on a real family’s impossible struggles during the devastating Indian Ocean tsunami of 2004—asks and answers. And it does so quite powerfully.

It talks of an undying human spirit, showing us the fiece protectiveness complete strangers can muster for one another. The illustrates the unyielding care and loyalty a parent bestows upon a child, a husband upon a wife. It speaks of the purity of self-sacrifice, the anguish of loss and the strength of love.

The film’s raging tsunami special effects are flat-out stunning. The acting is utterly convincing. And the tense tale of scattered family members fighting to stay alive while desperately searching for nothing more than a reassuring touch of a loved one’s hand or a tearful comforting embrace, is immersive and very, very moving.

It’s also quite terrifying and wrenching. The realistic death, devastation, excruciating pain, bloody filth, and visceral glimpses of torn, naked flesh are difficult images to see—as they impart a life-affirming tale unlike so many others that surround it.