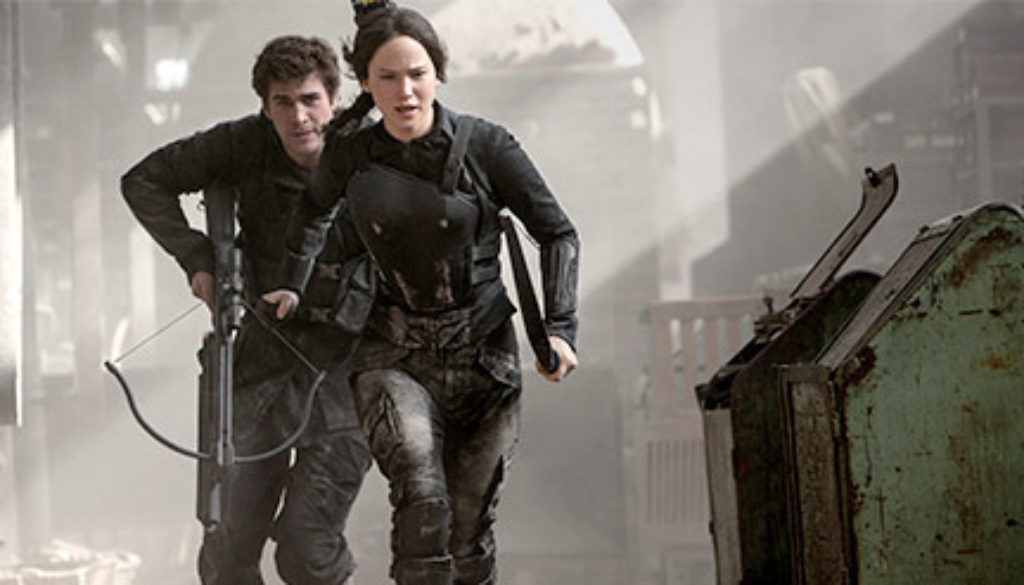 The first spark flickered to life when Katniss Everdeen volunteered to participate in the country’s sadistic Hunger Games, sacrificing herself by taking her sister’s place. Her every action thereafter breathed life to the bellows: her mourning the loss of her friend, Rue, in the first Games; her near-suicidal feint with Peeta and the berries; her Mockingjay wedding gown. By the time she loosed her final arrow in the second Games, short-circuiting the force field around the arena, she had indeed become the Girl on Fire, setting the world ablaze. She had become a symbol of hope for the oppressed people of Panem. And any aspiration they have of overthrowing President Snow’s corrupt government now rests on Katniss’ slim shoulders.

That’s harder to do now. Even though her mother and sister, Primrose, are currently safe in the bunker-like confines of District 13 (a locale long thought to have been liquidated in the country’s last civil war), Peeta is caught in the Capitol’s clutches. He’s being used as a propaganda tool, compelled to take to the television to demand an end to the revolt. And every time he shows up on the screen, he seems a little gaunter, a little paler, a little more bruised. Snow isn’t just using Peeta: He’s using him up.

Peeta and Katniss—friends, allies and Panem’s favorite star-crossed lovers—are now enemies, it would seem, black-and-white pawns in yet another game they never asked to play.

But play they must. Katniss knows that playing is the only hope she has of saving Peeta. She must take on the black mantel of the Mockingjay, lead the rebellion and bring the Capitol to its knees. If she can help Panem burn free from Snow’s cold claws, perhaps the country can be salvaged from the ashes, and maybe Peeta, too.

But how much will burn before it’s done?

[Spoilers are contained in this section.]

In Mockingjay – Part 1, The Hunger Games saga shifts from the killing arena to the broader world of Panem and a civil war between Snow’s Capitol and the outer districts. As such, the stakes feel even higher: It’s not just lives that hang in the balance (though those are certainly up for grabs), but souls.

Katniss is caught by forces out of her immediate control even as she proves to be the catalyst that energizes those very forces. District 13 wants her to play a hero on TV. And, thankfully, she actually is one—though not in the ways they always think or like.

Her power to connect with Panem’s people stems from her raw, unscripted honesty, and we see a lot of that here. When she visits injured civilians, she’s visibly moved. When Capitol forces bomb a hospital, she risks her life to bring the attackers down—and inspires a righteous uprising with a scorching speech.

Katniss is now, as before, motivated to save the lives of the people she loves, even if it means losing her own. When she agrees to become the district’s Mockingjay—a figurehead for Panem’s rebellion—she does so with conditions: She wants Peeta and the other surviving victors to be not only rescued from the Capitol, but pardoned. That’s pretty controversial in the district at first, given Peeta’s apparent collaboration with the enemy. But Katniss sticks to her arrows and wins a promise from the district’s President Coin. She even shows a willingness to change places with Peeta in the Capitol. She risks her life to save Prim from aerial bombardments. And she rescues Buttercup—a cat she’s always loathed—from the wreckage of District 12.

Returning the favor, Peeta, even in a state of semi-coherency, shows a great deal of loyalty to Katniss. As he pleads for people to meekly accept Snow’s tyranny, he still defends Katniss. And when he has a sudden moment of greater lucidity while submitting to yet another propaganda interview, he warns Katniss of an impending danger.

Gale, too, gets a chance to flex his heroic muscles. Even though he suspects by now that Katniss’ heart belongs to Peeta, he’s the first to volunteer to try to rescue his rival. He serves as one of Katniss’ closest friends, even as politics begin to form a wedge between them. And the people of Panem? Well, more than a few are willing to pay (and do pay) the ultimate price Snow demands in the hope of a freer future.

We hear this sage advice: It’s best not to give in to the torment and terror you feel, because it takes “10 times longer to put yourself together than it does to fall apart.”

Katniss and Gale briefly, almost chastely, kiss, as do Finnick and Annie. Finnick intimates that after he won the 65th Hunger Games, President Snow essentially turned him into a male prostitute, giving him as a “gift” to the regime’s most loyal supporters.

The previous two Hunger Games movies have taken place largely in the Capitol’s murderous gaming arenas, pitting man against woman, teen against teen in a gladiatorial fight to the death. Mockingjay – Part 1 is more of an outright war movie. And that changes the tone and tenor a bit.

While the camera studiously avoids blood and gore (and we rarely even see close-up shots), two skirmishes between rebels and white-clad “peacekeepers” result in mass casualties. Rebels are mown down in hails of bullets, while the malevolent peacekeepers are beaten into submission and blown up. Peacekeepers also execute civilians, burying bullets in the backs of their heads.

Katniss visits a hospital full of victims, some contorted in pain, most heavily bandaged. She and her crew have to walk through a makeshift morgue filled with partly covered corpses. When Katniss goes back to visit her old home, District 12, she sees the burned, contorted remnants of hundreds of people—many of whom were her friends and neighbors. She steps on a skull and flinches back, horrified.

A bombing raid forces folks in District 13 to retreat far underground. We hear the booming of the assault, see cracks develop in the ceilings and, afterwards, the exterior damage caused. Peacekeepers are overcome by some sort of chemical agent. Someone is thrown against (and breaks) a glass supply cabinet, then is nearly choked to death. Someone else shows signs of torture, and we hear that it involved beatings and being injected with the dreaded tracker jacker venom.

None. Calling Snow’s propaganda “horse manure” is as dirty as things ever get.

None. And that fact doesn’t make the perpetually drunk Haymitch particularly happy. Under orders from District 13, he goes somewhere to “dry out,” and when he returns, he wryly pans the district’s prohibition of alcohol. Smirking about how rough he looks, forced up on the wagon like he’s been, he says, “I guess it looks as bad as it feels.” He asks Katniss if she has access to any “medication.” “You’re unbelievable,” she sighs.

Much of what Katniss is asked to do is part of an extensive propaganda effort—which involves her “handlers” trying to fabricate a scene or two.

The Hunger Games: Mockingjay – Part 1 is based on the first part of Suzanne Collins’ Mockingjay, the final book in her dystopian trilogy. And it is clearly the cleanest of The Hunger Games movies. There is no foul language and only the barest hints of sensuality. The violence feels paradoxically reined in here even as it escalates through all the districts. We don’t see people die horribly from tracker jackers or get attacked by vicious mandrills or develop horrific blisters from poisonous mist. While the war-caused casualties are numerous, they are rarely as up-close-and-personal as we’ve seen. Moreover, the plot point that felt so shocking when the first movie was released—children being made to kill children for the entertainment of a nation—is essentially gone now. The Hunger Games themselves are no more. This is war, pure and simple.

But while Mockingjay – Part 1 pulls back a bit on the content quotient, it’s intentionally quite grim. We see no parties, hear no discussions of Katniss’ latest dress. Effie Trinket does not mention the word mahogany even once. While we see that Panem can and must change, we also see that to be reborn, it must first die.

“If we burn, you’ll burn with us!” Katniss shouts to the camera, and in a way, directly to President Snow. And so Mockingjay – Part 1 is a surprisingly mature and foreboding rumination of war and its cost. Of war and its fog. Follow Peeta’s advice and lay down your arms? Then you pacify evil and sacrifice freedom for peace, never minding how false it might be. Follow Katniss’ banner and fight Snow’s fascist regime? Then you destroy what little comfort you have … even when you’re not at all sure of what comes after.

War is sometimes necessary, the movie suggests. But it’s equally explicit in this: Necessity does not mitigate the reality that war is never good. It is instead an indiscriminate, raging destroyer, a hungry beast—no less terrifying than those mutated monsters Katniss faced in the arena—devouring the just and unjust alike.

This is not necessarily a condemnation. These concepts deepen the story beyond who Katniss wants to smooch and whether Prim will be able to keep her cat. And they can inspire us to keep fighting our own necessary fights. But they do serve notice of a bleaker journey. A journey Katniss could never have imagined while in the middle of the Hunger Games.