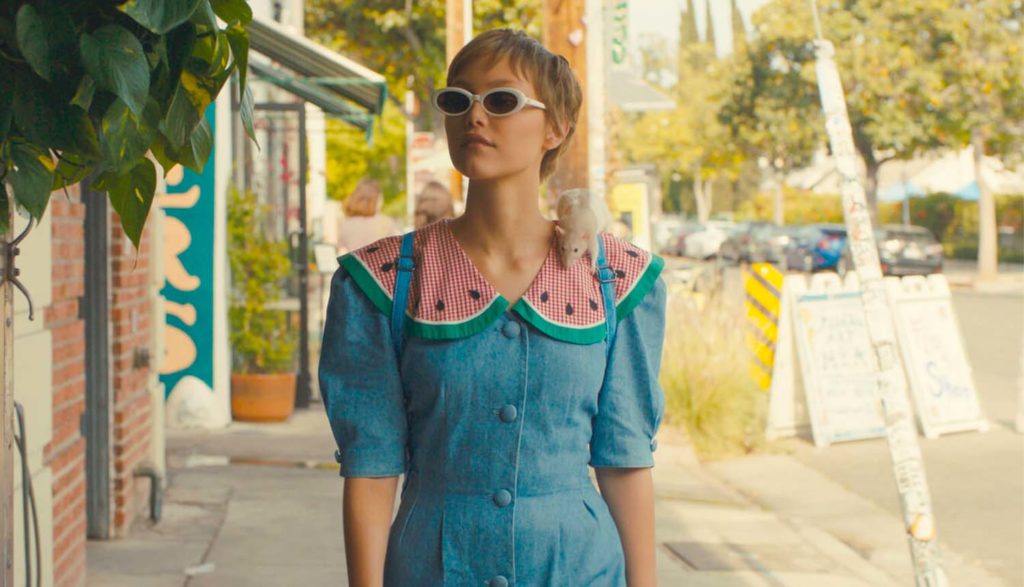 Stargirl was doing just fine in Arizona. In fact, she was better than fine. She’d made friends at Mica High School. She’d fallen in love (even if the relationship didn’t quite pan out). Why move?

She tells her mom that Cinnamon, her pet rat, is her oldest friend. That’s not normal. “Is this going to be a thing now?” she asks her mother, Ana. “Just going from place to place?”

No, Ana promises. In fact, she goes a step farther: Stargirl will finish her senior year in L.A. No more moving ‘til then. And, Ana reminds Stargirl, she has a whole summer to get used to sunny, SoCal. “Make some new friends that aren’t your pet rat,” Ana tells her.

Stargirl doesn’t even have to go outside to make her first one.

Right after they move into their new apartment, and as Stargirl sings and plays her signature ukulele, a boy chucks a few small rocks at her window. His name’s Evan. He’s the youngest son of Ava and Stargirl’s new L.A. landlord. He tells Stargirl that he and his older brother, Terrell, want to make a movie. And wow, given Stargirl’s vocal talents, Evan thinks she would just be perfect for it. If director Terrell approves, of course.

Terrell approves, of course. He needs only to hear her bring the house down in the club where he works to know that, yes indeed, Stargirl would be perfect for the film. Stargirl quickly becomes an equal partner in the project (because she’s just that sort of person), and she suggests the perfect song for her to sing in it. It’s by a woman named Roxanne Martel, who made one album in the 1990s and never made another. She seemed to have vanished from the musical world altogether.

But—and here’s the wild thing—Roxanne hangs out at the very club at which Terrell works. They don’t call her “Roxanne,” of course. They call her “Table Six,” because that’s where she sits every night, sipping on Shirley Temples all evening long.

Stargirl is not intimidated by Table Six. She walks right up to her, tells Roxanne what a big fan she is and asks if she can use her song in a movie.

“No,” Roxanne tells her, scowling hard enough to crack wood. “You’re gonna have to figure out your own thing. Disneyland’s closed, kid.”

But this is a Disney movie. And you know that Stargirl—just like Cinderella and Belle and Anna—will find her way to a happy ending.

Even if she has to deal with Table Six to get it.

Sure, Stargirl experiences her share of luck in this story. But the plucky adolescent is awfully good to the people around her, too. And maybe there’s something to be learned from there: That sometimes, a good attitude and luck go hand-in-hand.

Stargirl’s infectious optimism impacts most everyone she meets. Her influence is perhaps most noticeable as she deals with Mr. Mitchell, Ana and Stargirl’s grouchy downstairs neighbor. He grouses about the teen’s singing; so she gives him a pair of fuzzy red earmuffs, which he takes to wearing about the yard. Soon, the two are talking about Mr. Mitchell’s old career (a movie producer) and his son (estranged). And by the end of the film, Scrooge-like Mr. Mitchell has taken almost a Scrooge-like turn.

“I was always good at fixing problems in movies, but I was never that good in real life,” he admits. “You gave me something that I thought only existed in pictures. I’m suddenly the guy who wants to know everything and everyone, and I want them to know me.”

He offers a bit of sage advice, too: “Make mistakes, but don’t regret them. Learn from them, because regrets are the hardest things to carry when you get older.”

Stargirl’s charms impact everyone around her, from her closest friends to people she just meets on the bus. (She gives a bus passenger her colorful hat, for instance, much to the passenger’s delight.) She even gets her mother to take a leap of faith and follow through on an important promise—even though it’s risky.

Ana knows what she has in her daughter, too. She admits to Stargirl that she’s messed up a lot in her life. But Ana looks at her and knows that she got at least one thing right.

“The thing that mattered most turned out the best,” Ana says.

But Stargirl learns a lesson or two, as well—most especially from her setback with Roxanne. When she refused to let Stargirl sing her song, Stargirl was forced to write one herself. And that, we learn, was exactly what Roxanne wanted all along.

Roxanne’s album, and the track that Stargirl wants to sing, is called “Miracle Mile.” The song isn’t religious, but it does contain exhortations to “believe” and to embrace mercy.

Stargirl and Evan are clearly attracted to each other. They kiss a couple of times—first as part of the movie, then when the cameras aren’t rolling. (Evan politely asks permission.) When Evan asks her whether she’s ever had a boyfriend before, Stargirl admits that she has (as chronicled in the original movie Stargirl). “I think that if you loved someone, that’s always there, somewhere,” she tells him. “But I’m here with you, OK?”

The movie that Ana is working on gets shut down because of an interaction between the director and someone else involved in the film. We don’t hear what that interaction is, but we do hear that someone’s doing an “investigation” of the matter, which brings to mind a number of sexual harassment charges that have come to light in the movie industry.

Ana tells Stargirl a bit about a time she lived in L.A. that involved a failed relationship.

We hear one use of the word “d–n” and a few misuses of God’s name. Outside those instances, though, the film keeps its language pretty clean.

As mentioned, Terrell works in a nightclub, and we see various beverages (presumably alcoholic) in front of most of the patrons. The exception is “Table Six,” aka Roxanne, who drinks a steady stream of non-alcoholic Shirley Temples (a mixture of lime soda, ginger ale and grenadine).

While Stargirl performs during an open mic night at the club (and again later in the film), Terrell tries to keep her and Evan (neither of whom are close to the legal drinking age) in a part of the bar reserved for non-drinkers. Stargirl and Evan both venture into the drinking portion of the bar at least once, but the manager shoos them back, muttering that he doesn’t want to “get arrested for letting kids hang out at the bar.”

One character lies. The director Ana works with is, indeed, a jerk.

In 2019, HBO unveiled a show titled Euphoria, a story about high school kids that was filled with mountains of drugs and sex and bad behavior. For its creator Sam Levinson, Euphoria only reflected reality. As he told Entertainment Weekly:

“I feel like this is a debate that goes on constantly throughout time, where people go, ‘Parents are gonna be scared,’ and you go ‘Yeah.’ And young people will be like, ‘Yeah, that’s my life.’”

Euphoria is extreme, but hardly alone. Most movies and television shows about teens assume that drinking and drugs and promiscuous sex are just part of the landscape. What separates the “good” kids from the “bad” ones aren’t as much whether they do these things or not, but rather how responsibly they do them.

When Evan and Stargirl simply touch hands, it’s a big, momentous deal. When Evan asks for Stargirl’s phone number, she tells him that she doesn’t have a phone. Underage drinking? Not even a temptation. And this, in the middle of Los Angeles.

And even though the movie is, by most standards, quite innocent, some of the messages are responsibly mature.

When “Table Six” tells Stargirl about her failed attempt at becoming a star, she talks honestly about feeling rejected and even a little ashamed. But she also talks about how she moved on from there and found purpose in other avenues. “Just ‘cause it doesn’t look like you thought it would doesn’t mean you’re not living your dream,” she says.

And then again, as Terrell, Evan and Stargirl’s sizzle reel wraps up and Terrell wonders how it’ll be received, Stargirl herself says something fairly cogent: “Well, we love it, right?” she says. “We had fun making it. That’s all that matters. Whatever comes next, we did it. And we did it together.”

Disney often gives us protagonists that experience oversized success—screen-based fame avatars that Disney’s young viewers can point to and say, I wanna be like that, perhaps not understanding that fame is as much a product of luck as skill, or that celebrity is often faint and fleeting. And while this film indeed gives us a typical, even rote Disney ending, these little notes of realism should not go unnoticed.

Certainly, Hollywood Stargirl won’t land on Hollywood’s list of greatest cinematic achievements. But powered by Grace VanderWaal’s delicate singing, the cast’s charisma and an innocent-but-grounded understanding of what it is, Hollywood Stargirl is watchable and likable. And that’s enough to make fans of innocent fare practically euphoric as a result.