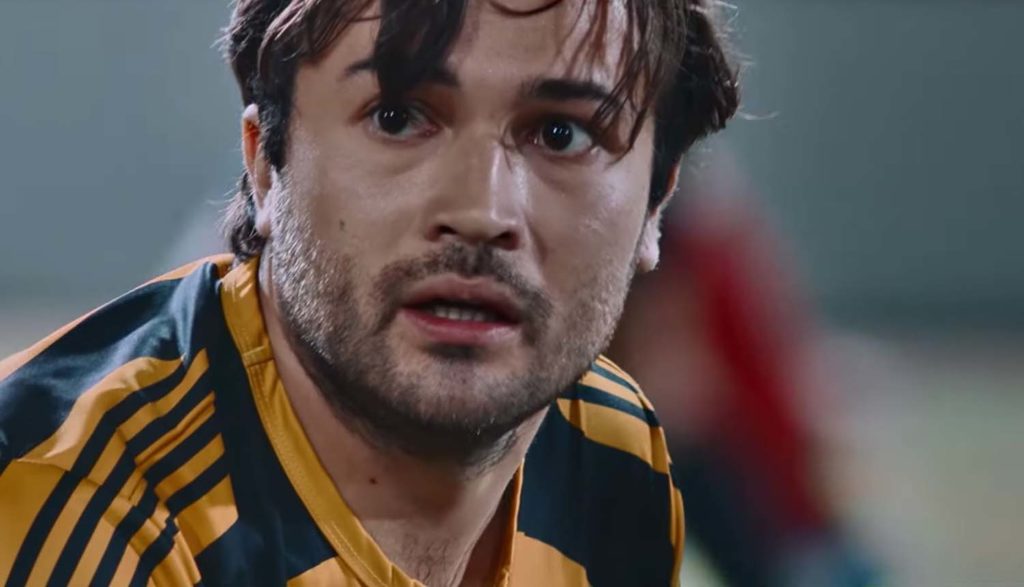 Jack has always had high expectations for himself.

How can he not? His father, Harrison Davis, is the legendary soccer coach for the Carolina Mantis FC (Football Club). One of his brothers, Sam, is the star goalie and MVP for the same team. His sister, Sally, is filling a vacant congressional seat.

But it’s not his fault that his life turned out this way! If it weren’t for his father publicly humiliating him by cutting him from the team three years ago, he’d be just as famous and well-off as the rest of his siblings. Instead, he’s stuck playing in the Industrial League with his self-confidence shot.

After a conversation with his ex-girlfriend, Sofia, paired with the unexpected news that the Georgia Wild FC is desperate for a striker, Jack decides to try out for the team—even if it means that he may have to play against his brother and father.

Jack’s father never believed in him. But maybe it’s time Jack started believing in himself.

Sofia and Jack briefly talk about the importance of familial upbringing. Jack comes from a family which “competed for pretty much everything,” including attention from their famous father. Though Jack’s family grew up with wealth and fame, he is broken about how disconnected he feels with his family.

In contrast, Sofia’s family didn’t have much. But she grew up with parents who instilled within her (and her siblings) the conviction that family is vitally important. “We had so little but really had so much,” Sofia says. “I was very lucky.”

Jack isn’t interested in rekindling his broken relationship with his father. But his dad relentlessly pursues him to try to patch things up. His father doesn’t regret cutting Jack from the team (“The team comes first, no matter what the emotions are”), but he does want to remind Jack that he’s never cut him from the familial team.

But even that’s a hard sell for Jack, as he’s always felt that the only way he’ll be loved and accepted is if he excels in life—or in this case, in an upcoming soccer match. That’s when his best friend, Eddie, reminds Jack that his own brotherly love for Jack isn’t conditional: Whether he wins the game or not, Eddie promises he’ll still be his best bud. Eddie tells Jack that good relationships are built upon genuine connections apart from performance and success, so Jack doesn’t need to impress him (or anyone else) in order to have his support.

“You could be selling t-shirts in Tahiti, man, I don’t care,” Eddie says. “The only thing that you have to do right now is go in there and play a game—if you want to.”

High Expectations isn’t a Christian movie. That said, Eddie’s words above potentially offer a good reminder and possibly a teachable moment for Christian families to talk about. Our Father does not declare us righteous before Him based on our own works or success; rather, it’s based on the finished work of Christ (see Romans 10:4). Though we are called to turn away from our sin (see Romans 6:1-2), we are not condemned or cut off from God when we do stumble in our walk with Him (Romans 8:1-2). Our human relationships may seem conditional at times, but the Lord is quick to forgive us.

Jack is seen in his boxers. He makes a comparison between guys who drive a Maserati and the size of their genitals. Jack mentions that Sofia’s friend Greg pinched his rear. Jack proposes to Sofia, and the two kiss.

Sofia says that Greg is gay. He and his boyfriend take a photo with Jack. Sofia wears a dress that reveals some cleavage.

Eddie makes a joke about dirty underwear. Jack’s father, Harrison, and his fiancée, Joan, kiss. Jack’s brother Paul makes a comment about their brother Sam walking into a restaurant with three girls at his hip, claiming that Sam needs them to satisfy his ego.

Jarring soccer plays include trips and slide tackles. Greg forcefully grabs Jack to fight him, and others break the two up. A goalie pushes Jack after Jack calls him a crude name.

The s-word is used eight times; in one instance, the audio is cut out. We hear the acronym “B.S.” once. “H—” and “a–” are both used seven times, and we hear “d–n” five times. God’s name is misused 13 times, and one of these is followed by “d–n”—though in that instance, the audio goes silent during “God.” Jesus’ name is misused twice. We also hear uses of “crap,” “douchebag,” “idiot,” “moron,” “stupid” and “dang.”

Jack and Eddie often drink together. Once, Jack drinks shots and gets drunk. Eddie also drinks a beer at a sporting event, and he references going to the bar to get drinks. Sofia and Jack drink wine at a restaurant. Paul drinks a glass of alcohol.

We hear a reference to prescription medication. A drug dealer says Tuesday night is “free hallucinogen night.” Jack attempts to purchase drugs from him, but the transaction gets broken up by a police raid.

Jack’s brother Sam is extremely arrogant. Jack struggles with anger-management issues, and his rage occasionally gets the better of him. Sam steals Jack’s (non-alcoholic) drink at one point.

Jack stands on the cusp of greatness. But up to this point, he’s been stuck, unable to step over that threshold.

Most of the others in his wealthy family have gotten their moment in the spotlight—and some of them have been hogging it for a long time. But when Jack tried to shine a little light on himself, his father publicly shoved him out of it so hard that he’s had an arduous time getting back onto his feet.

His father (played by veteran actor Kelsey Grammer) is the coach for a prominent soccer club, and Jack’s got quite the soccer skillset. It seemed like a no-brainer for him. But when Jack tried out for the team, he was cut, and it wounded him in such a way that he’s dealt with self-confidence issues ever since—let alone lasting familial scars that still sting whenever the idea of joining a team enters Jack’s brain.

But when an opportunity arises to join a rival team, Jack must learn to overcome his doubts and fears, and the only way he’s going to accomplish that is with the support of a couple friends. Though they swear up a storm and love heading to the bar for drinks, they’re good friends who are more than willing to provide genuine help.

High Expectations reminds parents of their duty to guide, support and love their children, and it helps to show that family can also be found in friends who stick closer than a brother. Those are solid messages in a film also unfortunately asks viewers to endure many misuses of God’s name, among other profanities.

High Expectations is being released via Fathom Events one night only, Thursday April 7. For more information and ticket availability, visit Fathom Events.