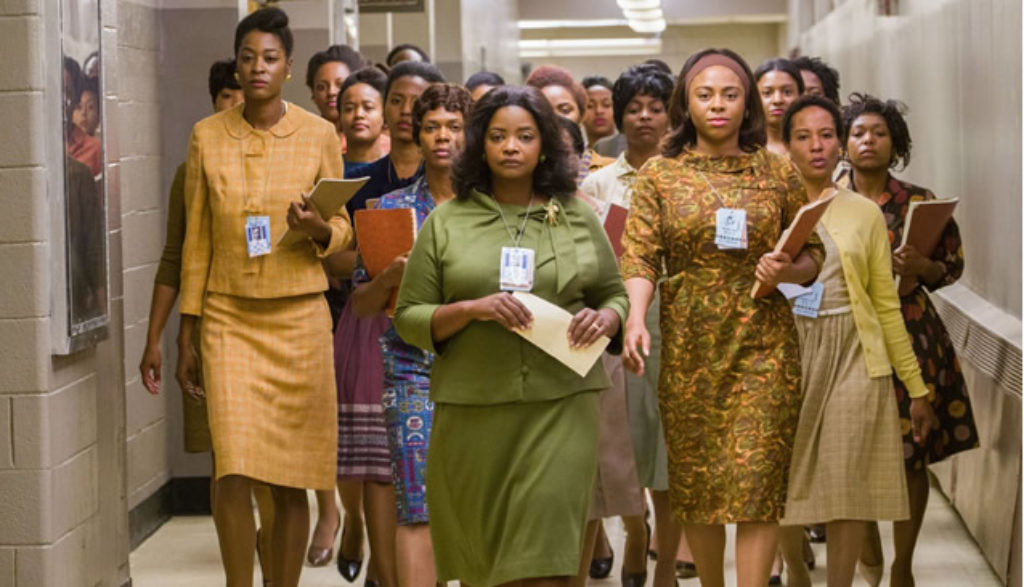 Rockets just don’t get to the moon by themselves. No, it takes men! Men to build them, men to fly them, men to plot their complicated trajectories! White men! Men with ties, preferably skinny ones! (The ties, not the men.)

Or so the thinking went back in 1961, back when America’s Mercury space program was just getting off the ground.

Sure, there were folks besides men hard at work within the bowels of NASA’s brain trust, located at Langley Air Force Base in Virginia. And when the car carrying three NASA employees breaks down along the side of the road—black, female employees—they set right the Virginia policeman who stops to help them.

“There are quite a few women working in the space program,” says Dorothy Vaughan, giving him an ever-so-veiled stink eye.

But even though NASA seems to be building a new, rocket-powered future, its nuts-and-bolts operations are still a product of 1961. Langley’s still in a Southern, segregated state. Dorothy and her fellow black, female carpoolers, Mary Jackson and Katherine Goble, work at Langley’s West Campus, where the “colored people” are kept. They and others do important work: They’re the computers before the computer age, women who calculate and crunch the numbers that are so critical to the space program’s future. But these computers are kept apart from the rest. They have their own bathrooms, their own cafeterias, their own coffee machines. Integration is not, it would seem, part of NASA’s future any more than it is Virginia’s.

Sometimes, however, talent and determination have a way of making their own futures. America’s fledgling space program—which is locked in a battle with the U.S.S.R. that its surely losing—can use all the brilliant minds it can find. And some of those minds might just be working out of the West Campus, using the bathrooms labeled “Colored Women Only.”

We’ve seen all manner of dramas addressing America’s long history of racial inequity, from 2014’s underrated Selma to 2016’s controversial and bloody Birth of a Nation. Hidden Figures tackles the same themes. But these women—whose characters as depicted here are based on three very real NASA employees—don’t take up arms or march in protests. Instead, they fight the status quo within the very system that’s pressing them down, pushing back with their skill, talent and flat-out determination.

Hidden Figures is, perhaps, Katherine’s story most of all. She’s called to work in Langley’s formidable nerve center because of her prodigious talent for math. But even though she can outthink most—if not all—of the men in this NASA think tank, she still finds herself sprinting a half a mile to the West Campus in order to use the designated bathroom and making her own coffee in a pot labeled “Colored.”

As she works through these conditions with grace and spirit, though, things begin to change. People see her work and marvel at it. She presses for recognition and, in slow steps, begins to receive it. It’s gratifying to know that that real Katherine—still living and a spry 98, by the way—was an integral part of NASA until her retirement in 1986, working on everything from the Apollo program to the space shuttle. A building at Langley, the Katherine G. Johnson Computational Research Facility, was named in her honor just last year.

There are others who help these women along the way. Al Harrison, head of the division working to calculate how to get the Mercury astronauts into space, seems almost oblivious to race. His only concern is getting the best minds to work on a common problem. When he learns that Katherine has to run between conferences to simply use the restroom, he integrates the restrooms by pulling down the “colored” sign with a crowbar.

Elsewhere, scientist Karl Zielinski encourages Mary to get an engineering degree. When Mary protests that she’s a “negro woman,” he counters, “I’m a Polish Jew whose parents died in a Nazi prison camp. I think we can say we are living the impossible.”

John Glenn, one of Mercury’s astronauts, goes out of his way to meet and thank Katherine, Mary, Dorothy and other minority “computers” for their work. And when a real, automated computer spits out contradictory information right before a launch, Glenn demands that Katherine check those numbers personally—trusting her and only her to come up with the right figures. “It’s a little hard to trust something you can’t look in the eyes,” he explains.

We should also note that Dorothy and Katherine are parents as well, with Katherine raising three children on her own after her husband’s death. Both clearly care a great deal for their kids, even if they’re not home as often as they’d like to be.

Christianity means something to the three women at the center of this story. All three go to the same church, and the pastor praises their work from the pulpit. Katherine and her family say a blessing before dinner. And when she tells her kids that she misses their father “as much as anyone,” they tell her they know he’s “with the angels.”

Good news is sometimes punctuated with a quick praise to the Almighty. When Mary gets a plum assignment, for instance, she grabs the assignment sheet and says, “Thank you, Jesus!” When a police officer volunteers to escort them to work, Mary accepts with alacrity. The fact that three black women are “chasing” a policeman through rural Virginia, she says, is a “God-ordained miracle.”

When Mr. Harrison calls for renewed dedication from the scientists in his charge, he says, “Let’s have an amen, d–mit.”

Widowed Katherine attracts the notice of a suitor, Col. Jim Johnson. The two begin having dinner together at Katherine’s house. One night while they do dishes, Jim announces that it’s about time they kissed. They do, fairly passionately. Later, at another family dinner, Jim proposes. In a postscript to the film, we learn they’ve been married for 56 years.

Mary is also married, and she and her husband kiss (with Mary protesting to hubby Levi that he’s going to make her late for class if they’re not careful). That doesn’t keep her from eyeing Mercury’s astronauts when they visit Langley. “How can you possibly ogle these white men?” Katherine scolds. Mary tells her that she has every right to look.

Someone quips about how learning to dance can lead to winning a man’s affection.

We see old footage of rockets blowing up, and we hear news reports of a bomb being thrown into a freedom bus. Something goes wrong during a critical space mission, and there’s some concern the manned capsule will burn up on re-entry.

Al Harrison violently rips off a bathroom sign, sending it crashing to the ground. In a test, heat shields from a dummy space capsule fly off, banging into a shatter-proof window.

Nearly 15 uses of “d–n.” “H—” is also uttered about half a dozen times, and God’s and Jesus’ name are both misused—the latter emphatically—once.

Dorothy, Mary and Katherine hang out at Dorothy’s house one afternoon, and Dorothy serves up an alcoholic beverage of some sort. Mary says she could use a good drink; she enjoys it a bit too much. She says she feels as good as she’s ever been, and Dorothy counters, “You’re as drunk as you’ve ever been.”

Dorothy goes to the library to check out a book or two on computer programming—the “future,” as she says. But when she shows up, she’s told that those books aren’t in “her” section (meaning, of course, the books for blacks). But later on the bus (where she and her two accompanying children are sitting, of course, in the back), she pulls out a book she apparently took from the library without checking it out. When her son calls her on it, she rationalizes, “Son, I pay taxes. And taxes paid for everything in that library. You can’t take something you’ve already paid for.”

We see Katherine’s ankles and skirt underneath a bathroom stall as she does work there. When Al rips down the bathroom sign, he says, “Here at NASA, we all pee the same color.”

And, obviously, racism—both overt and covert—is an essential elements of the storyline.

When Mary begins talking about her ambitions of becoming an engineer, her husband, Levi, thinks she’s delusional.

“Freedom is never granted to the oppressed,” he blusters. “It’s got to be demanded. Taken.”

“There’s more than one way to achieve something,” she says.

And, sometimes, indeed there is.

Hidden Figures is an inspirational exercise in understated activism. The women here do not ignore the racism that colors their lives. But they resist it not with violence or protest but with skill and persistence. Yes, they ask for the rights that are rightfully theirs. But they do so with a sense of grace, humility and patience. They don’t trust the system. But they find away to work within it to achieve their goals. And they change a lot of minds along the way.

One afternoon, Dorothy and her supervisor, Mrs. Mitchell, run into each other in the bathroom—a meeting that would’ve been impossible before Al Harrison ripped down that sign.

“You know, Dorothy,” Mrs. Mitchell says, “Despite what you think, I have nothing against y’all.”

“I know,” Dorothy says with a gentle smile. “I know you probably believe that.” And she walks out.

It’s a moment of searing self-realization, perhaps. For when the two meet again, Mrs. Mitchell hands her a new assignment: an overdue promotion that Dorothy had been fighting for throughout the movie.

Dorothy’s surprised, but keeps it under wraps. “Thank you for the information, Mrs. Mitchell,” she says.

It’s a beautifully understated sign of respect, that switch from Dorothy to Mrs. Vaughn, more important than the promotion itself. It’s a measure of newfound equality. And in a way, for all its subtlety, it feels like the movie’s greatest moment of triumph.

Hidden Figures inspires as it entertains. It acknowledges racial divisions while insisting that there’s more than one way to fix them. And while it can be crass, its heart is good.