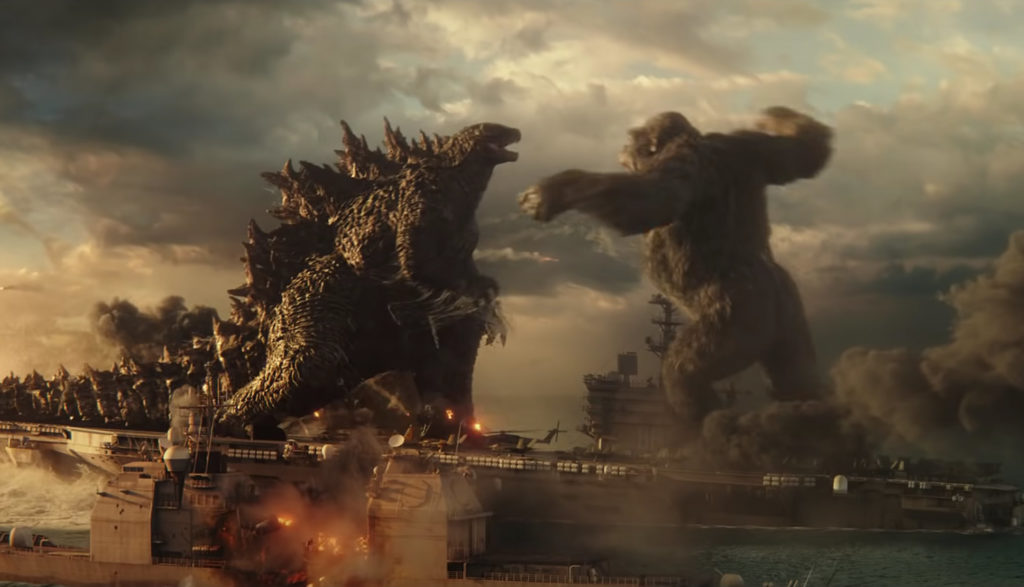 You may think you know about those super-sized beasties that go by the names King Kong and Godzilla. I mean, Kong is this gigantic gorilla that grew up on an ancient, hidden-away island, right? And Godzilla is an enormous scaley prehistoric sea monster that was brought forth from the depths of the ocean by misguided hydrogen bomb tests.

Everybody knows those details!

Well, what if I told you that your understanding isn’t exactly accurate? What if these monsters are a little different than we always thought?

The fact is, those in the know have discovered that these two creatures are actually linked with all other immense monsters we’ve seen through the ages. They’re all part of a group of creatures called Titans. And they come from a hollow core world at the center of our planet.

In addition, each of these predominant pummelers have taken on other monstrosities over the years because they are genetically compelled to do so. Something bubbling down deep in their gargantuan DNA drives these behemoths to fight till there’s only one Titan standing on the king-of-the-hill peak.

And it’s all come down to King Kong and Godzilla, two brawny battlers who have grown bigger and bigger every time we’ve seen them. This is their Godzilla versus Kong thrilla story. (Oh, and there are some generally inconsequential humans running around doing power-hungry and often foolhardy things, too.)

There are some parents and guardians in the story mix who appear to want to protect their young charges. But they’re really lousy at it. The kids always seem to slip away and do crazy, reckless stuff involving creatures that could crush them into pulp.

A small group of friends attempts to stop a powerful corporation from grabbing more destructive power. (But they really don’t accomplish anything of note.)

Were told that Kong saved a little deaf girl named Jia when her family—who lived on Kong’s island—was killed by a huge storm. Ever since, Kong and the tiny girl have a connection and communicate through sign language. She repeatedly tries to steer the big gorilla away from danger and back to the safety of his home.

Someone says that a company called Apex is “playing god.” And though not strictly spiritual, a scientist believes that the Titans are driven by genetic memories and instincts that compel them to clash when they otherwise wouldn’t.

One woman wears a formfitting top that reveals some cleavage.

Thumping, crushing and explosive destruction fill this pic from stem to stern. And I have to say, the CGI effects here are incredibly realistic. As Kong and Godzilla (as well as a man-made monster of similar size) bash and brutalize each other, the surrounding scenery gets predictably crushed and obliterated with loud screeching effects.

City skyscrapers are blasted in half with atomic blasts and lasers and smashed with huge fists; they’re crumbled and set on fire as the battlers fall into them or crash through them. A port city area is set ablaze. A group of ships is capsized or, in some cases, broken in half. Forest-like areas are set afire and uprooted; a huge, rocky cavern is devastated by atomic breath blasts and huge explosions. Cars and buses get kicked and thrown about. Military planes and vehicles are hit, blasted, picked up and crushed with explosive glee.

In virtually all of these cases, tiny humans either run from the destruction or get caught up in it. And though we don’t see the bloody aftereffects, it’s implied that hundreds to thousands of people are killed in the midst of all this ship, plane and city devastation. A few exceptions offer closer glimpses of the carnage, though deaths still occur outside the camera’s view.

Some of the battered humans in the mix end up with bloodied faces and arms. But in fact, the most realistic damage is delivered to Kong. He’s nearly drowned while chained and struggling underwater. Battles with Godzilla leave him bloodied, his shoulder dislocated and on the verge of death. At one point, he receives a massive, defibrillation-like shock to his heart.

In one or two cases when Kong kills a huge fleshy foe, he also grabs a huge mouthful of the creature’s goopy inner organs and chews them down. Jet bombers and fighters also hit Godzilla with large explosive bombs, missiles and large-caliber bullet fire.

There’s one unfinished cry of “what the f—” and a teen girl’s muffled exclamation could also be an indistinct f-word. A half-dozen s-words are joined by a few uses each of “h—” and “d–n.” God’s name is misused about seven times (including one combination of “God” and “d–n”).

A man carries a flask of whiskey. An Apex executive drinks several glasses of booze.

Two teens and a conspiracy theorist named Bernie break into an Apex building where Bernie has been undercover and stealing information for years. The trio gets several destructive situations and are held at gunpoint a few times. Madison notes that Bernie showers with bleach.

It may seem as if monster movies themselves once rose from the prehistoric, kaiju depths. After all, both Kong and Godzilla first thumped a cinematic foot to the ground and roared imperiously way before most folks reading this review were even born. (Back in 1933 and 1954 respectively.) Since their beginnings, these gigantic people-stompers have collectively starred in nearly 50 live-action films.

Godzilla vs Kong, then, is pretty much exactly what you would expect it to be. I mean, why mess with the expectations of a fanatically faithful fan base? So, you’ve got Kong throwing massive gorilla roundhouse punches that would level a stadium and Godzilla screeching out his patented eardrum-shattering roar while slicing through skyscrapers with an explosive atomic belch.

Beneath their monumental feet, massively muscled arms and scenery-mashing might, heavy naval cruisers capsize and rupture; aircraft get obliterated in fiery bursts; cities are pulverized; and thousands of miniscule humans run with screams on their lips and flying debris raining all around them. And all of that is presented with the most ground-shaking and camera-spinning CGI realism that hundreds of millions of dollars can create.

However, that’s all you get. Don’t come in expecting anything more than that and a bucket of popcorn. You know, like, say, real character development or a genuinely shocking conclusion.

If you’re looking for a story to be involved in, good performances to cheer, or anything worth watching from all those little humans, you’re out of luck. In fact, it’s very easy to wish that some huge hairy arm or scaley tail might shove all those pesky people off into some other movie where they wouldn’t keep annoying us.

I mean, hey, Kong and Godzilla don’t cuss or make a single inane choice. They just crush and smash things. Over and over and over.

Well, I guess that can get old, too.